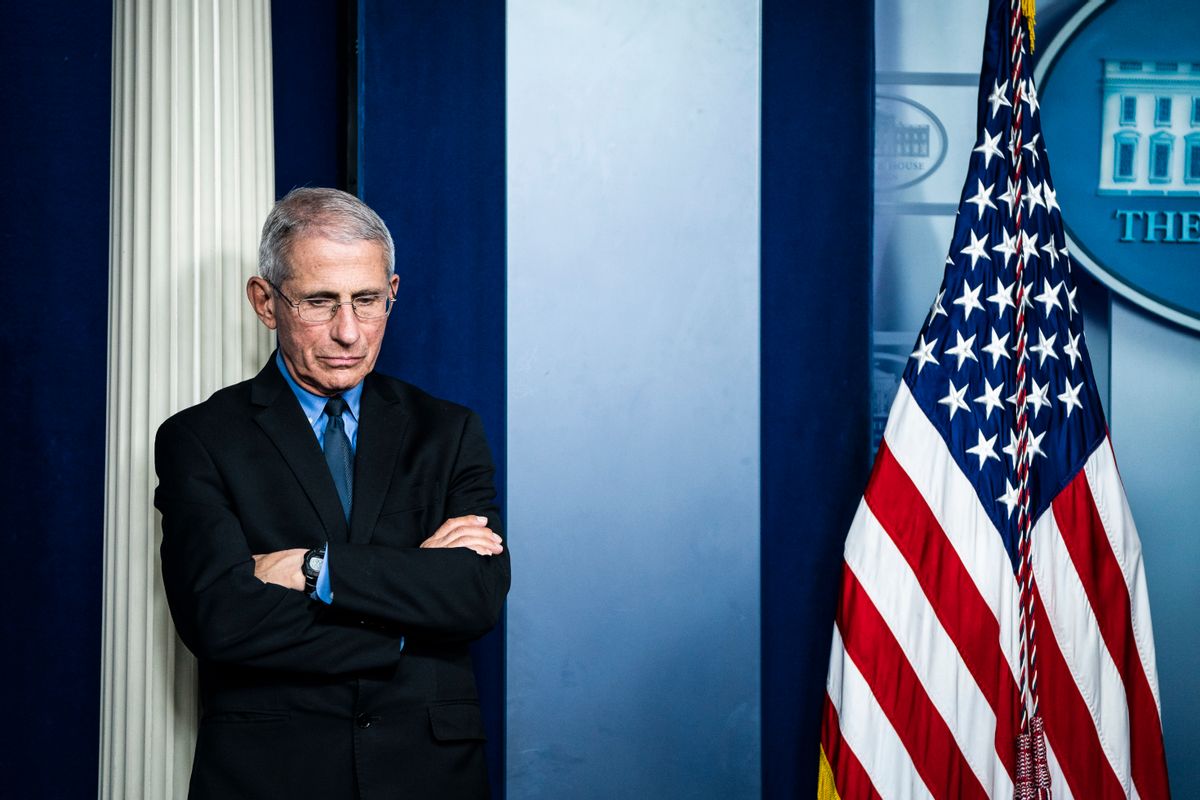 Republican attacks on Dr. Anthony Fauci have entered a new, more conspiratorial phase following the release of thousands of his emails this week via a Freedom of Information Act Request by several news organizations, including the Washington Post, BuzzFeed News and CNN.

Since the pandemic began last year, Fauci has emerged as a flashpoint of conservative ire despite his role as a top adviser to former President Donald Trump. But recent attacks have become more brazen and vitriolic as members of Congress and high-profile right-wing pundits stepped up their attacks, asking for his firing — or worse. Top aides to Trump even suggested this week that Fauci is the GOP's new Hillary Clinton: someone reviled by the Republican base that Trump will continue to use as a punching bag at rallies.

Much of the recent criticism stemmed from the idea that Fauci, a longtime director of the National Institute of Allergy and Infectious Diseases who has served under seven presidents, did not investigate fully the theory that COVID-19 had leaked from a lab in Wuhan, China, where the virus seemingly originated. At worst, some claimed (falsely) that the emails contained evidence he actively lied about the virus' origins, and about the effectiveness of masks, as a way to consolidate political power or hold onto his celebrity status.

The right-wing media ecosystem latched onto one of Fauci's emails in particular, sent Feb. 1 — well before the virus became widespread in the United States — as evidence of Fauci's deception. The immunologist Kristian Andersen wrote him about the virus' "unusual features," which might have suggested human engineering.

"On a phylogenetic tree the virus looks totally normal and the close clustering with bats suggest that bats serve as the reservoir," Andersen wrote. "The unusual features of the virus make up a really small part of the genome (<0.1%) so one has to look really closely at all the sequences to see that some of the features (potentially) look engineered."

Many conservatives referred to the email as a "smoking gun," and suggested that Fauci was "warned" the virus was engineered — but there's more to the story. As the Washington Post notes, Andersen did thoroughly investigate the idea COVID-19 was man-made, and her California lab published a study several weeks later in the journal Nature concluding that the theory COVID-19 leaked from a lab was unlikely based on a more complete analysis of the virus' genetic structure.

"Our analyses clearly show that SARS-CoV-2 is not a laboratory construct or a purposefully manipulated virus," the study found. "It is currently impossible to prove or disprove the other theories of its origin described here."

The "lab leak" theory was given a new round of new oxygen last month when the Wall Street Journal reported three researchers at the Wuhan Institute of Virology were hospitalized with a flu-like illness in November 2019, at least a month before the first recorded case of COVID-19.

In reality, Fauci has said repeatedly over the past year that he believes it is more likely COVID-19 spread from animals to humans, though he has never ruled out the possibility of a lab leak and publicly called on President Joe Biden and public health researchers to investigate the virus' origins further.

Fauci blasted the new round of right-wing vitriol during a Friday appearance on MSNBC's "The Rachel Maddow Show," calling the backlash "misleading" and "inappropriate."

"The [lab leak] question is extremely legitimate — But what's happened in the middle of all that is I've become the object of extraordinary, I believe completely inappropriate, distorted, misleading and misrepresented attacks," Fauci said. "It's really very much an attack on science."

Among those attacks were prominent calls in both houses of Congress for Fauci to be fired. Rep. Marjorie Taylor Green, the controversial congresswoman with a history of racist and conspiratorial statements, even introduced a bill, called the "Fire Fauci Act," which would reduce the career public official's salary to $0.

Sen. Rand Paul, perhaps his most prominent critic on Capitol Hill, had within a few hours begun to use the controversy as a fundraising pitch on Facebook: "Dr. Fauci MUST GO," the solicitation reads. "He's continuously and deliberately misleading the public at every turn. It's time to FIRE FAUCI."

In fact, Republicans and conservative interests have spent more than $300,000 over the last month alone targeting Fauci with Facebook ads, according to data from Bully Pulpit Interactive cited by Politico.

The blitz got a signal boost on right-wing media, where Fox News provocateur Tucker Carlson speculated that redactions in the emails likely meant Fauci was under investigation already — "We can only hope," he added.

The messages filtered down across social media, with #FireFauci trending on Twitter for a brief moment while users on both Reddit and Facebook called for Fauci to be tried for war crimes. The most-viewed Facebook posts on Fauci this week included vitriol-filled screeds from Ben Shapiro, Dan Bongino, Steven Crowder and Donald Trump Jr., among others.

For President Biden and his White House, the attacks have presented a growing conundrum — address the attacks directly, and risk amplifying them, or ignore it and hope the narrative doesn't catch on.

"Mr. President, do you still have confidence in Dr. Fauci?" a reporter shouted at Biden left the room.

Poking his head around the corner, Biden said, unequivocally: "Yes, I am very confident in Dr. Fauci."

For his part, Fauci told Rachel Maddow that he's focusing on the very-much-still-raging pandemic, and celebrating the considerable successes the country has made.

"My job was to make a vaccine and use my institute and these talented scientists that we have there and that we fund in the various universities to get a vaccine that was highly safe and highly effective," he continued. "We succeeded."

"All the other stuff is just a terrible, not happy type of distraction. But it's all nonsense."