With the return of "Tuca & Bertie," we reflect on how the show began a wave of smart survivor-centric storytelling 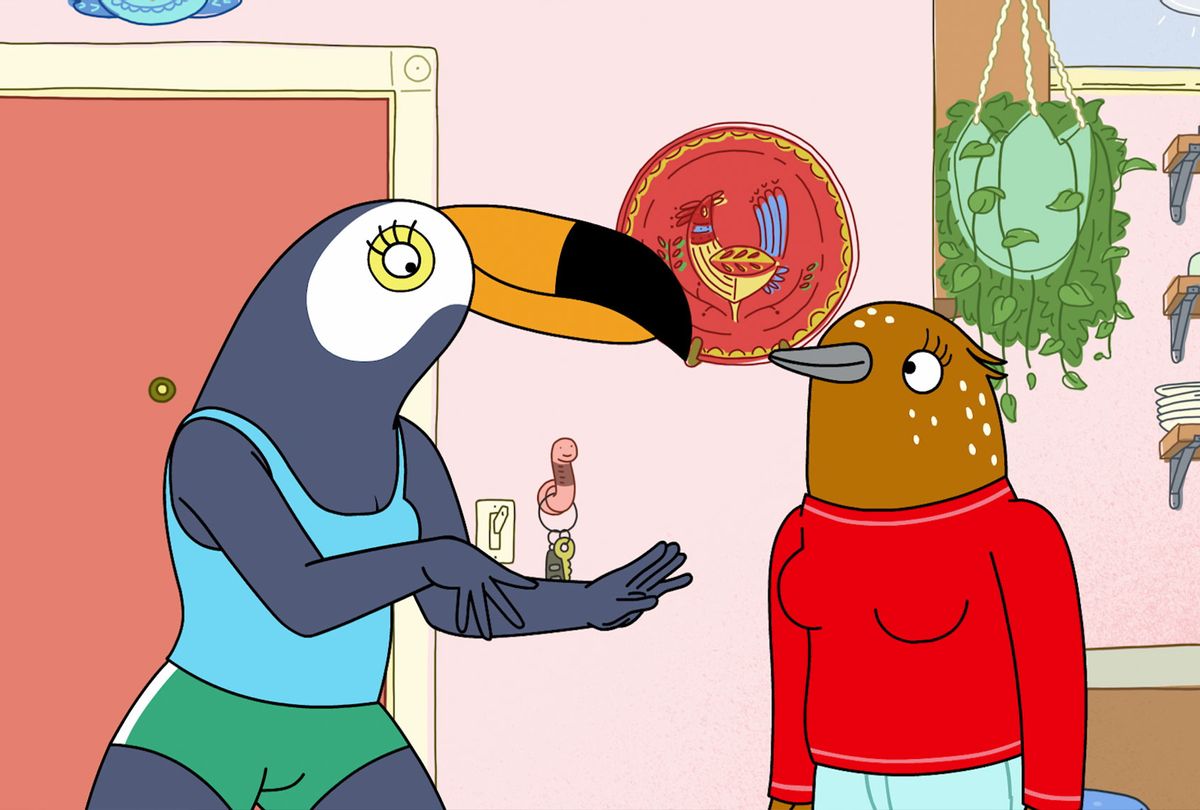 "Tuca & Bertie," the zany and colorful adult cartoon following the adventures of two, 30-something female birds (Tiffany Haddish and Ali Wong), will return this month, this time on Adult Swim after being canceled by Netflix after one season. As we await the show's next chapter, it's important to reflect on why it gained such a fervent following in the first place and warranted saving. In particular, this humble show featuring cartoon birds wasn't just hilarious and insightful, but challenged onscreen storytelling conventions.

Salon revisited the quirky, relatable delights of the show's first season, from social anxiety to the day-to-day frustrations of being a woman in the workplace. One storyline in particular comes to mind: that is, when Bertie (Wong), an anxious song thrush, opens up to her best friend Tuca (Haddish), a free-spirited, exuberant toucan, about her experience being sexually assaulted as a child by her lifeguard. To this day, the trauma of the assault has stopped Bertie from swimming again for years until that episode.

What made this sexual assault storyline so special wasn't even necessarily about what it included, but rather, what it didn't. The show didn't depict a scene of the assault, name or identify the character who harmed Bertie, or, as some eagle-eyed fans pointed out, even include a single male character in that episode. In this way, it was a masterclass in the future of sexual assault storytelling — one in which we don't need triggering, violent assault scenes constructed for the male gaze, and instead center survivors, and explore how this violence has impacted them.

What started with "Tuca & Bertie" in 2019 has ushered in a wave of thoughtful, compassionate and much-needed transformation in storytelling of sexual assaults — primarily from more and more women writers and directors, after years of male writers like Dan Weiss and David Benioff of "Game of Thrones" fame having notoriously subjected audiences to almost countless graphic rape scenes. After all, for lazy, male writers, sexual violence will always be a quick and easy means for "shock factor," or the simplest way to make a female character "grow."

Instead, we can now turn to female creators. From HBO's "I May Destroy You" to "Promising Young Woman," produced by Margot Robbie, we're increasingly witnessing an evolution in the presentation of and dialogue around rape culture in media — starting with the dated idea we need rape scenes at all. "Promising Young Woman," the story of a young woman's quest to avenge her friend who was raped at a party in medical school, centers around a rape that's never shown, and maddeningly portrays the unforgivable violence of everyday male complicity with rape culture. Throughout the film, Carey Mulligan as Cassandra feigns intoxication at bars to expose men as sexual predators, and confronts and punishes those who harmed or denied justice to her friend. Absence of a scene of the rape itself seems to strengthen the film's storytelling power, focusing on and bringing to light the intensity of the aftermath of sexual violence for victims and their loved ones.

Meanwhile, HBO's "I May Destroy You," which first aired last year, follows author Arabella (Michaela Coel) as she navigates life, friendships, and her career after a sexual assault at a bar that she struggles to remember. Like "Promising Young Woman" and "Tuca & Bertie," the show – created, written, produced and co-directed by Coel –explores how the emotional violence of sexual assault long outlasts the act itself. All of these features have sparked powerful and important conversation on rape culture, and they've done so without triggering, dehumanizing rape scenes.

"Tuca & Bertie" show creator Lisa Hanawalt spoke to TV Guide in 2019 on the decision to not include a scene of the assault, or bring to life Bertie's attacker in any way at all, "because [she] didn't want anyone to judge whether or not [Bertie] overreacted to it." She explained, "We just wanted to say, 'You know what? Something happened, and it traumatized her. And it really doesn't matter what those specifics are.'"

The thoughtful, survivor-centric writing and decision-making of "Tuca & Bertie" spoke to a common experience among survivors — specifically, gaslighting and dismissal even in the event that they're believed about what was done to them. One in three women globally has experienced sexual or domestic violence, but few report their experiences, many citing fear of disbelief or retraumatization. If their account of their trauma is believed, it's often heavily scrutinized or compared to other supposedly more violent scenarios, with survivors implicitly or explicitly told they're overreacting, as Hanawalt suggests.

On top of often being accused of overreacting, survivors also face doubt and criticism if they come forward about their experience after time has passed. Yet, as "Tuca & Bertie" masterfully shows, not talking about your assault for years is highly common, often a result of repressing one's trauma, or not even realizing what was done to them was violent until later in life.

As Hanawalt pointed out, if someone comes forward about their experience with assault either in a show or movie, or real life, the only information we really need is that they were harmed, it traumatized them, and they need our support. Allowing survivors to anonymize their abuser is also crucial to supporting them, and helping survivors feel comfortable and safe speaking on what happened to them without pressure to disclose more details than they wish, and potentially retraumatize or endanger themselves.

The assault storyline of "Tuca & Bertie" didn't happen in a vacuum — over the course of the show, Bertie faces routine sexual harassment in the workplace and the outdoors, and as many women can relate to, she's forced to shrug it off, and at times, process complicated emotions about it. Bertie has also struggled with intense, sometimes debilitating anxiety most of her life, that seems likely to extend from the aforementioned childhood trauma. In this way, the show has allowed audience members who are survivors of any kind of trauma to reflect deeply on whether or how this trauma has continued to affect them and their mental health, today. And guess what? It does all of this without rape scenes, and with two cartoon birds.

Hopefully, the show will pick up right where it left off in its groundbreaking, relatable and compelling storytelling when the show returns.