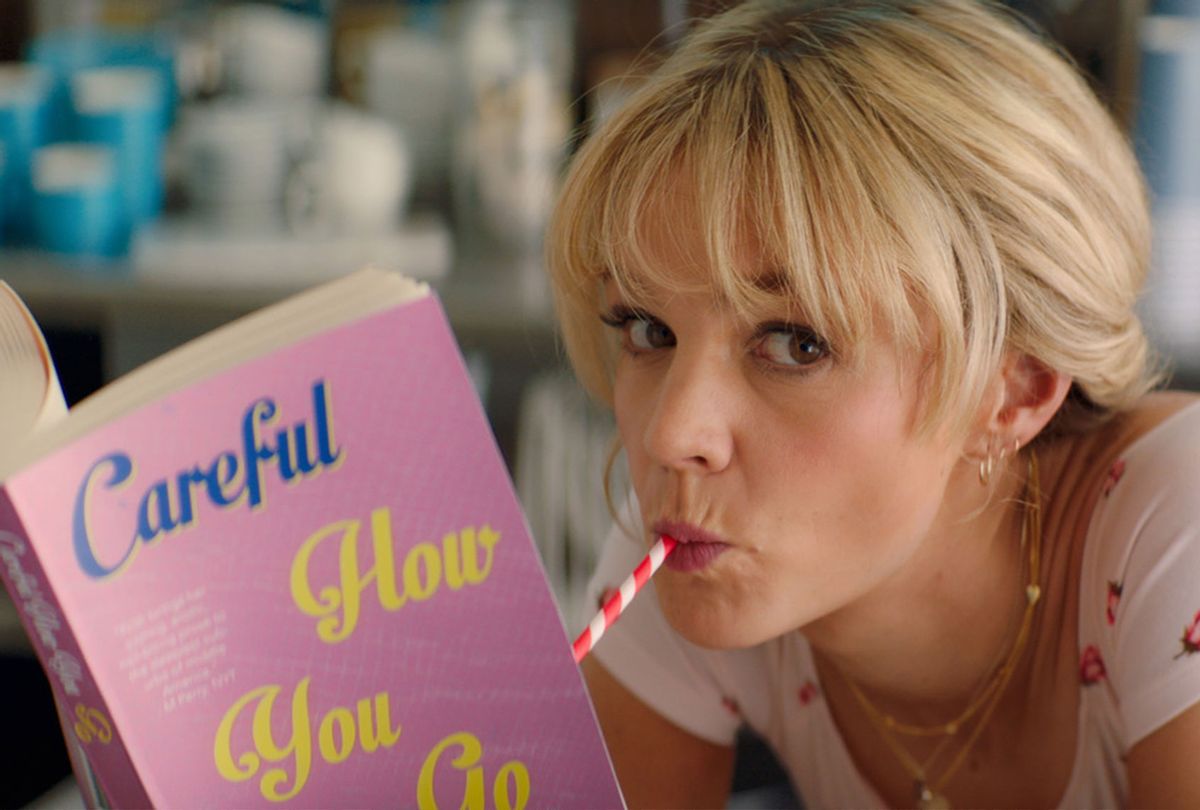 One might expect that the title character in "Promising Young Woman" is Cassandra Thomas (Carey Mulligan, who appeared on "Salon Talks" to discuss the film), a former medical student now underachieving behind the counter at a coffee shop run by Gail (Laverne Cox, in supportive best friend mode). But as this slick and satisfying comedy-thriller — written and directed by Emerald Fennell ("Killing Eve" and "The Crown") in her big-screen debut — shows, all is not what it seems.

Take the pre-credit sequence where Cassie is splayed out in a bar, too drunk to stand. Jerry (Adam Brody) claims he is a gentleman and offers to take her home. Instead, he takes her to his home, plying her with more alcohol, and getting her into bed where he thinks he will have his way with her. Jerry gets a surprise as he removes Cassie's panties.

"Promising Young Woman" is full of surprises, and that is what makes this kicky film so delicious. Cassie may be 30 and living at home after dropping out of medical school, but she is a clever and determined woman. It is soon revealed that Cassie is exacting a very specific form of revenge to counteract the wrong done to her best friend Nina years ago. It may be a form of penance, but Cassie feels it is for the betterment of society.

Cassie's plan is triggered after she reconnects with Ryan (Bo Burnham of "Eighth Grade"), a charming (though some might say smug) pediatric surgeon who knew her back in their medical school days. Ryan is smitten with Cassie, and she reluctantly agrees to date him. When he mentions their former classmates, Cassie starts tracking them down. Each was involved in a criminal episode involving Nina, and Cassie is looking to mete out her own brand justice for her friend.

Mulligan gives a bravura performance here, slipping in an out of a series of characters in an effort to achieve a kind of closure. (She is slinky, reminiscent of Michelle Pfeiffer). As she separately meets with Madison (Alison Brie) and Dean Walker (Connie Britton), she makes them both squirm by confronting them with the uncomfortable truth about what happened to Nina. Suffice it to say, after their encounters with Cassie, minds are changed.

It is best not to reveal too much about "Promising Young Woman" but what can be said is that Cassie is really all about teaching people a lesson on how to treat women. She has fun dressing down the unsuspecting Neil (Christopher Mintz-Plasse), a date who thinks "they have a connection," but cannot remember her name. That moment is practically a dress rehearsal for what she does to some of the other guys she targets.

Fennell's film is a wish fulfillment revenge fantasy, and viewers who go along for the ride will be entertained. There is an undeniable pleasure in seeing Cassie get the best of men. Even in a throwaway scene — where a truck driver yells at her for stopping in the middle of a traffic lane — Cassie responds soundly with a tire iron.

That said, one of the most curious scenes has Cassie offering sympathy to a man who actually shows some contrition and regret for his past actions. Her ability to forgive him is poignant, showing she is capable of change herself.

Likewise, there is a key scene where Cassie meets with Nina's mother (Molly Shannon) who tries to convince her daughter's friend that it is time to move on from the past. The film also briefly suggests that Cassie has had psychological issues in the wake of the tragedy, a point that could have been more fully explored.

Instead, "Promising Young Woman" shifts its tone up again. This uneven film sags during a montage sequence where Cassie and Ryan sing along to Paris Hilton in a pharmacy. There is a reason why the relationship with Ryan is emphasized, but as the pieces of the story come together, things fall almost too neatly into place. It is a shame that this carefully constructed plan starts to feel contrived.

But Fennell (like Cassie) does have a twist (or two) planned as the film builds to its unsettling climactic confrontation. The filmmaker obviously delights in pulling the rug and the floor out from under everyone.

"Promising Young Woman" certainly makes its points about how women always deserve to be treated by guys with respect and dignity. Delivering this message in a clever framework, as Fennell has done, will surely make it go down smoothly. That said, it would not be surprising if this film empowers women to take more responsibility and control like Cassie does rather than prompt men to reform their wicked ways. But that is why this edgy film works. It is sure to spark debate.