In Azazel Jacobs' film, the actress plays a glamorous widow with a cat who finds herself insolvent and in Paris 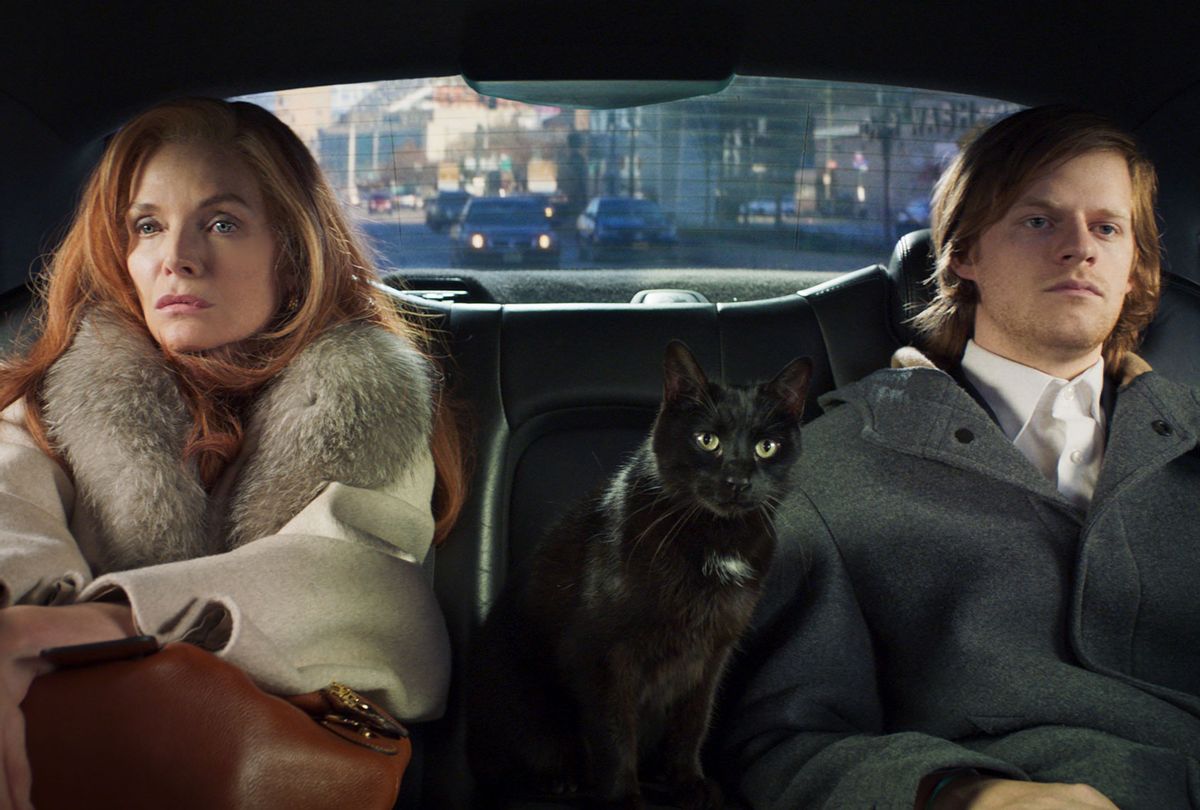 At the center of "French Exit," the closing night film at this year's New York Film Festival, is the formidable Frances Price (Michelle Pfeiffer), a once-wealthy widow now facing insolvency. Frances, who has a reputation of sorts, sizes up and takes control of every situation she encounters. It is her defense mechanism to silence all comers, from a real estate agent who demands a high fee to the waiter whose attention can only be obtained by setting a floral display on fire. These are character-defining moments that illustrate Frances' moxie. But she is mercurial. How else to explain Frances' penchant for sharpening a knife in the dark because she likes the sound it makes?

Pfeiffer delivers a sly, elegant performance as Frances, which provides the chief pleasure of Azazel Jacobs' film, a melancholy farce adapted by Patrick DeWitt from his novel of the same name. Watching Frances lighting a cigarette, as she does throughout the film, reveals so much of her mood, her thoughts, and her feelings. With each calculated flick of the lighter, the louche Frances illuminates her weariness, and steels herself for what comes next.

Frances always looks glamorous, but she is self-aware enough to acknowledge that her glamour days are long gone. Jacobs lets his camera fixate on Pfeiffer's impressive cheekbones as Frances looks forlornly out a window. Despite her regal postures, she is a sad, haunted woman, putting on a brave face, masking her pain.

And then there is her voice. Pfeiffer purrs many of her lines in "French Exit," and her husky whisper is delicious. She can melt or chill the air depending on what she is saying or whom she is talking to. She exhibits a haughtiness when addressing most people, but a conversation she has with a homeless man on a park bench in Paris is downright seductive.

Frances is in Paris because she has moved there with her adult son, Malcolm (Lucas Hedges) and her black cat, Small Frank (voiced by Tracy Letts). She has liquidated her remaining assets and sailed to Europe to stay at her friend Joan's (Susan Coyne) modest apartment. She had hoped her life would run out before her money, as was the plan, but the reverse has happened. France for Frances is not quite retirement — that would suggest she actually worked a day in her life — nor is it a second or even third act. It is, she acknowledges, more like a coda. Frances is contemplating suicide, a fact she scribbles on a postcard to Joan but never mails. However, a waiter who finds it does, and Joan arrives in Paris only to discover her apartment is full of people.

And it is in this packed apartment that the film finds much of its humor. Frances has unexpectedly befriended Mme. Reynard (Valerie Mahaffey), a lonely widow during her brief time in the city. Mme. Reynard is quirky and neurotic, but she helps Frances secure a private investigator, Julius (Isaach De Bankolé, the coolest man in movies), to find Madeleine (Danielle Macdonald), a fortune teller who slept with Malcolm on the ocean liner, to communicate with the now-missing Small Frank. Small Frank, Frances insists, contains the spirit of her late husband, and Frances as well as Malcolm have some unfinished business with him. As Madeleine conducts a séance, "French Exit" gets a bit goofy, but Pfeiffer sells Frances's belief, which is what makes it drolly amusing.

Things get wackier when Susan (Imogen Poots), Malcolm's fiancé arrives from New York, with Tom (Daniel di Tomasso) her once and current beau in tow. Tom engages Malcolm in an arm-wrestling contest which is silly, but not inappropriate.

"French Exit" does not so much build narrative tension as ask viewers to go with the flow, which is what Frances does in Paris. Her letting go — of money, of grudges, of herself — liberates her, and provides the film with its poignancy and charm. At times, the film can feel stagey or artificial, with clipped dialogue and pregnant pauses, but when a character mentions something about luck, or love, what at first seems frivolous becomes oddly thoughtful, even meaningful upon reflection.

That said, does Frances – who it is revealed behaved improperly in the face of her husband's death – deserve anyone's sympathy? Pfeiffer's performance is convincing as Frances' icy demeanor softens over the course of the film.

In support, Hedges is appropriately passive with both his mother and Susan, but he does manage to exhibit a little childish glee when Malcolm encourages Frances to see what surprising thing Mme. Reynard keeps in her freezer. And as Mme. Reynard, Mahaffey provides most of the comic relief.

"French Exit" is a peculiar film, pitched at the same frequency as the offbeat characters. Jacobs asks viewers to lean into the rhythms.