From "Plan B" to "Grandma," 5 abortion road trip movies that reflect our frustrating reality

From buddy comedies to dramas, movies focused on abortion barriers tell a story that shouldn’t need to be told 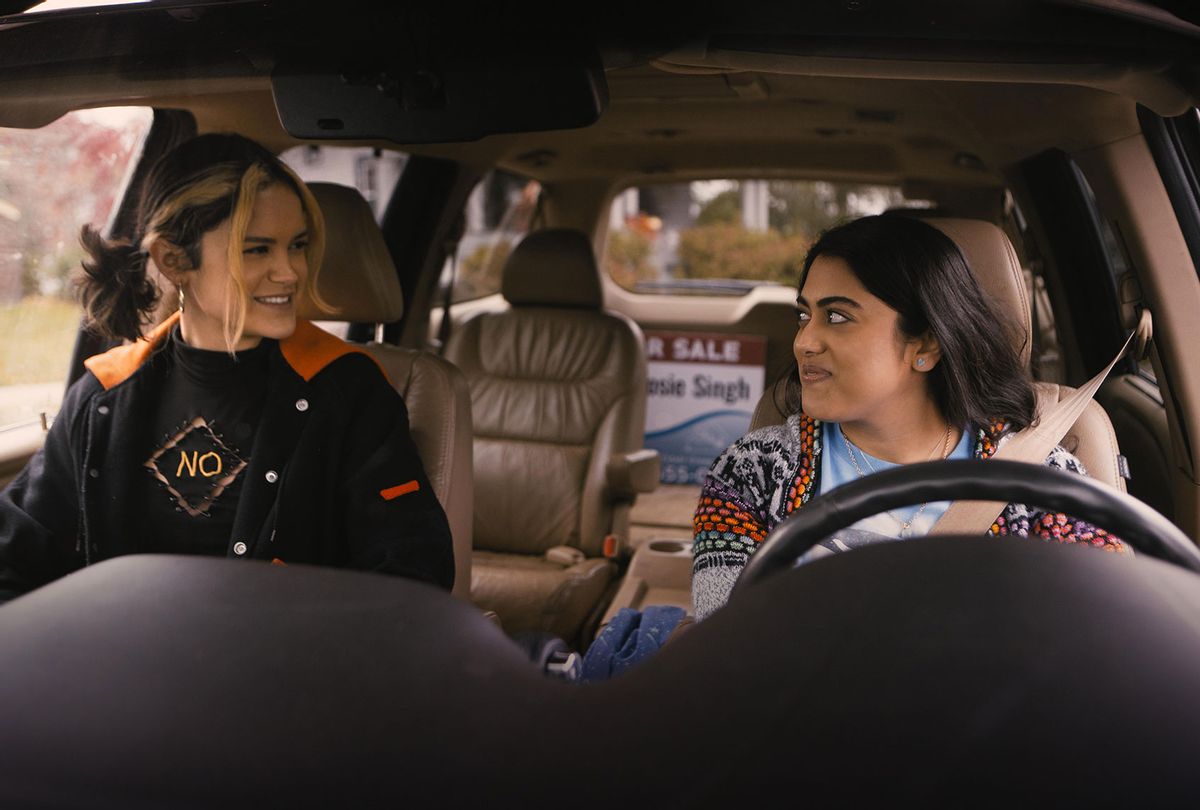 Kuhoo Verma and Victoria Morales in "Plan B" (Brett Roedel/Hulu)
--

Last week, Hulu's "Plan B" became the latest movie to focus on the complex, stigmatizing and sexist barriers to reproductive care, which are especially difficult for young people. In Natalie Morales' directorial debut, two South Dakota high school students, Sunny (Kuhoo Verma) and Lupe (Victoria Morales) have 24 hours to find emergency contraception after Sunny's first sexual encounter. The problem is, the only pharmacist in their small hometown denies Sunny access to the pill citing the "conscience clause."

To be clear, emergency contraception is entirely different from abortion care, preventing rather than ending a pregnancy that's already underway. But other than that important distinction, "Plan B" continues a growing trend of movies in which seeking abortion or other reproductive care through tremendous cost, geographical and legislative barriers isn't just a subplot — it's the main storyline.

This representation is critical to showing the exhaustive, everyday challenges for women and pregnant folks to get basic health care, and abortion patients as real people and not just political talking points. These movies, which include more recent titles like HBO Max's "Unpregnant" (2020) and "Never Rarely Sometimes Always" (2020), crucially expose the human toll of insidious anti-abortion laws, showing the real-life impacts of being forced to carry an unwanted pregnancy, and forced to go to extreme lengths to be free, in a way that tired political debates can't fully get across. Yet, while growth and improving representation of abortion and reproductive care in media is a victory, it's a victory that's hard to celebrate when the dehumanizing, real-life conditions upon which these movies are based shouldn't exist at all.

The abortion-slash-reproductive-care-road-trip movie is still relatively new, first emerging with Paul Weitz's "Grandma" (2015). For years, research by Advancing New Standards in Reproductive Health (ANSIRH) found abortion wasn't even brought up or discussed as an option in TV shows or movies in which unwanted pregnancy occurred. And despite more representation of onscreen abortion in recent years, ANSIRH and We Testify, an organization that empowers young people and people of color who have had abortions to tell their stories, have pointed out, white people and teenagers are overrepresented in these stories. In real life, most people who have abortions are people of color, adults who already have kids, and folks of all ages.

Today, in many states across the country, there are more barriers to abortion care than ever — a 2017 study found millennials are worse off than their parents when it comes to obstacles to reproductive care, with worsened pregnancy and maternal health outcomes. Ninety percent of US counties lack an abortion provider, seven states are down to just one, hundreds of state restrictions have passed in the last decade, and in 28 restrictions passed in just one week this year. All while Medicaid coverage of abortion care remains prohibited, disproportionately pushing care out of reach for poor people of color, many predatory fake clinics receive exorbitant amounts of state funding. Throughout the pandemic, during which several abortion and reproductive care roadtrip movies have released, these conditions have worsened due to COVID-related travel restrictions, clinic shutdowns, and financial barriers.

Here's how recent additions to the reproductive-care-road-trip genre have offered their own artistic spin on these daunting realities:

Weitzman's "Grandma," arguably the first abortion roadtrip movie, follows teenager Sage (Julia Garner) and her lesbian, artist grandma, Elle (Lily Tomlin), and their journey all over Los Angeles to try to come up with $630 for Sage's abortion without Sage's mother knowing. Naturally, the two face many roadblocks beyond even the significant cost of the procedure, primarily in the form of anti-abortion stigma as Elle's ex-husband is initially willing to give Elle money until learning what it's for.

This movie differs from more recent abortion roadtrip films, which are set in more rural states or states with more restrictions on abortion, requiring their protagonists to travel out-of-state for the procedure. In "Grandma," the Californian grandma-granddaughter duo isn't up against pesky parental consent laws that bar minors from having an abortion without parental permission, or lack of nearby clinics — their primary struggle is that they're broke, and the only people who could financially help them oppose abortion. Here, of course, the movie could have shown the duo seeking help from an abortion fund, which exist solely for this purpose and help thousands of people afford abortion care each year.

"Grandma" is groundbreaking as one of the first movies to focus on abortion and the challenges to get it. But it primarily centers white women's experience in seeking abortion care, and reinforces the stereotype of only supposedly "irresponsible" teens getting abortions. Weitzman even described Sage as ignorant and representative of the "erasure of women's history in the minds of young people now," despite how many of today's young people are steadfastly politically active, and experiences like Sage's show why they have to be.

"Little Woods" tells the story of two sisters struggling financially in rural North Dakota, pushed to extremes for survival. Ollie (Tessa Thompson) and Deb (Lily James) are eventually forced to cross the border to Canada so Ollie can complete a dangerous drug pick-up to save their late mother's house from foreclosure, and Deb can safely get an abortion. Prior to crossing the border, Deb, a single mother without health insurance, learns prenatal care alone would cost upwards of $8,000, and initially plans to have an unsafe, back-alley abortion when she learns the nearest safe abortion clinic is hundreds of miles away.

While "Little Woods" convincingly portrays the realities of rural poverty, and the devastating impacts of clinic shutdowns and lack of nearby abortion providers, its portrayal of Deb's abortion experience isn't fully accurate. Specifically, travel across the border to Canada to get safe, legal abortion, as opposed to just traveling across state lines or across, doesn't really happen. If anything, as Amy Jacobson, North Dakota State Director for Planned Parenthood of Minnesota, North Dakota, and South Dakota, told Refinery29 in 2019, the opposite is more likely to be true. "We've had women from Canada come to us," Jacobson told the outlet, noting medication abortion specifically has been unavailable in Canada.

Pennsylvanian teenager Autumn (Sidney Flanigan) is joined by her supportive cousin Skylar (Talia Ryder) on a roadtrip to New York, where Autumn can get an abortion without needing parental consent. From greyhound buses to 2 a.m. subway rides when the girls need a place to stay overnight, the movie shows the unglamorous realities of seeking abortion care on a budget — especially as a teenager navigating a paradoxical legislative landscape that tells you you're too immature to know you want an abortion, yet mature enough to be pregnant or become a parent.

The movie is intentionally quiet and bleak, with Autumn, its unwilling protagonist, spoken to far more than she speaks. One scene at a "crisis pregnancy center," or an anti-abortion clinic in which people deceived into thinking the clinic offers abortion care are actually subjected to anti-abortion propaganda, is particularly grueling to endure. Staff at the fake clinic tell Autumn her fetus's heartbeat is "the most magical sound you will ever hear," while she quietly turns away from the ultrasound monitor, visibly uncomfortable and disturbed. Hundreds of fake clinics operate across the country, some receiving state funding, and they've capitalized on internet search engines to prey on pregnant people at the most vulnerable time in their lives and subject them to disinformation and shaming.

"Never Rarely Sometimes Always" and "Unpregnant" came out within months of each other, both during a pandemic that's made traveling great distances even more punishing. They tell a very similar story in wildly different ways, but both get the point across: Abortion is highly difficult to access, especially for minors who can't have their parents know about their pregnancy. We rely on friendship and community to bridge these gaps.

In sharp contrast with the solemn energy of "Never Rarely Sometimes Always," "Unpregnant" is a cheery, chaotic and unashamed buddy comedy that takes two former best friends, Veronica (Hayley Lu Richardson) and Bailey (Barbie Ferreira), on a road trip from Missouri to New Mexico so Veronica can get an abortion without her parents' consent. From a pawn shop to brief, inadvertent captivity in an anti-abortion couple's home, and through car theft, familial revelations, and a blackmailing boyfriend, Veronica and Bailey's abortion journey may not be like everyone's, but it speaks to universal truths about how hard it is for teenagers and folks in the Midwest and South to get care.

By injecting plenty of hilarity and lightness into the story, "Unpregnant" also contributes to alleviating persistent cultural stigma around abortion. After all, there's no shortage of justified feelings of doom and gloom in the movement for abortion rights, in the face of near-daily restrictions and political attacks — "Unpregnant" reminds advocates and those affected by draconian abortion laws to laugh and feel some joy for once.

"Plan B," again, differs from the aforementioned titles for two reasons — first, Sunny is seeking emergency contraception, not abortion, and second, its two main characters are young women of color. Of all these movies, "Plan B" is the only one that centers a person of color seeking reproductive care, despite how people of color often face greater systemic barriers to get care.

"Plan B" is distinctly more like "Unpregnant" and "Grandma" with its buddy comedy approach. It also almost has the urgent energy of a time heist, as the teens are on a 24-hour time-crunch to get the morning after pill. The movie's dilemma, again, arises from a conscience law that allows a sexist pharmacist to refuse Sunny the pill, and unfortunately, laws like this exist in real life and were instated on the federal level in the Trump era. These laws deliberately separate reproductive care from all other health care, and have allowed doctors to refuse to offer abortions or even information about abortion. Of course, if someone wants the "freedom" to not provide health care, they could simply choose to not become a health care provider.

Like "Unpregnant," "Plan B" destigmatizes reproductive care with its humor. It portrays Sunny and Lupe as two relatable teens struggling to please their strict Indian and Mexican parents, and struggling to fit in at their predominantly white school. While "Plan B" descends into levels of chaos — ahem, automobile theft — reminiscent of "Unpregnant," it's distinct in that its protagonists' racial identities aren't incidental to the story, but are central to it. This is especially refreshing after years of whitewashed onscreen abortion representation.