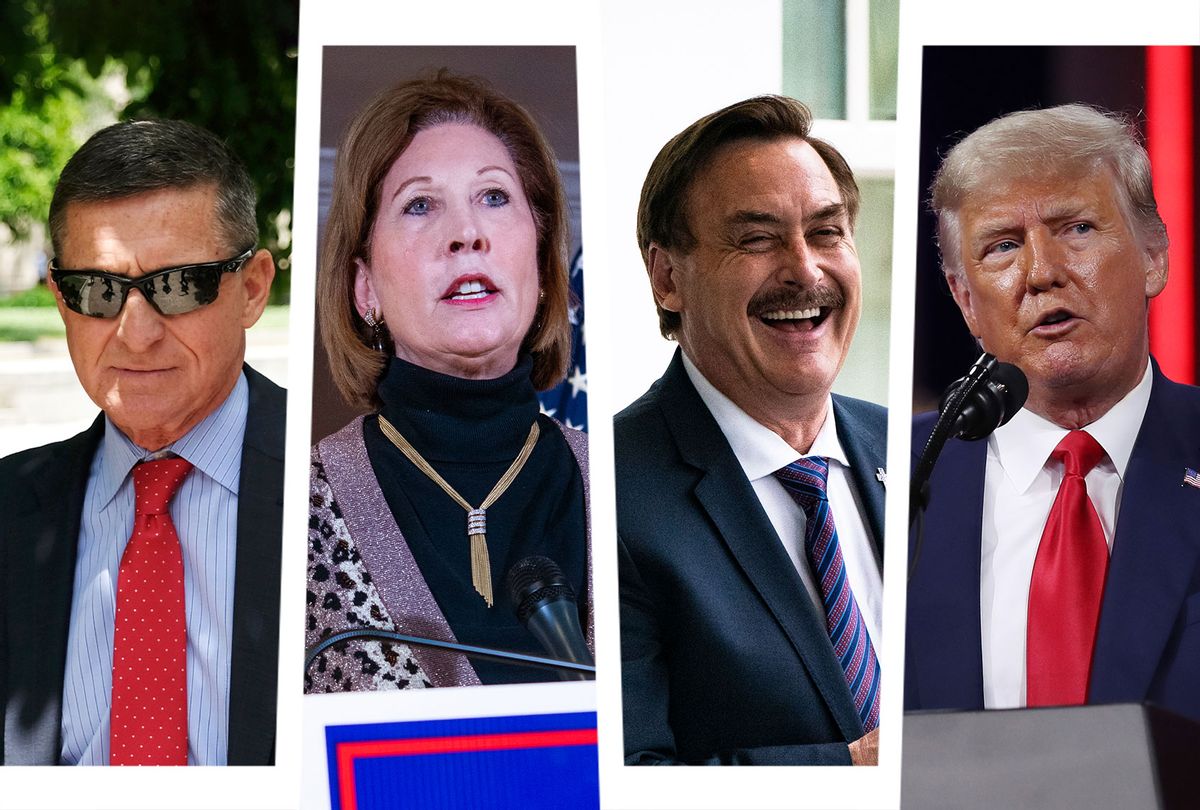 Mike Lindell, the Minnesota pillow entrepreneur and enthusiastic promoter of election-fraud conspiracy theories, appears to see himself as a crusader for truth and justice, undaunted by the scorn and mockery of those who refuse to take him seriously. (A category that encompasses nearly everyone in politics and the media, including many allies and supporters of Donald Trump.) Nothing about Lindell's performance seems insincere, which is one of the things that makes him stand out in a landscape of near-universal mendacity.

Lindell is probably the proximate source of the torrid fanfic fantasy that Donald Trump will somehow be returned to office in August, through some as-yet-unexplored method of undoing presidential elections because you really, really want to. (Lindell himself has already tried to kick this imaginary can down the road to September, but online true believers heard August, so August it is.) Trump reportedly likes the sound of this, and why wouldn't he? Then again, he also liked the idea of buying Greenland, setting off nuclear bombs inside hurricanes and injecting bleach to kill the coronavirus.

It's disheartening enough, to begin with, that this delusional scenario, evidently whispered into the morose ex-president's ear by a pillow salesman, has produced an entire wave of news stories about what Trump thinks and why he thinks it (an especially barren field of inquiry, suggestive of Nietzsche's maxim about staring into the abyss). I don't really know what term to apply to New York Times reporter Maggie Haberman, who launched this idiotic meta-news cycle with a completely unsourced tweet about what Trump supposedly says or believes, but never deigned to write an actual article making this claim. "Bullshit" and "chickenshit" are two words that come to mind.

Now that various Trumpist ghouls, ranging from moonbat ex-general Michael Flynn to seemingly undead attorney Sidney Powell to the booze-addled wombat and self-professed Leninist known as Steve Bannon, have come out as maybe a little bicurious about an extra-constitutional August "reinstatement," we face a larger problem than the sheer stupidity and hopeless Trump addiction of the mainstream media. How seriously do we have to take this? Of course an August reinstatement is preposterous, but it also seemed preposterous that Trump and his allies would seriously try to block the pro forma certification of electoral votes on Jan. 6. Is this just standard-issue Trumpian wish-casting, or an actual attempt to incite or inspire another violent uprising?

I think the only clear answer is that, as usual in TrumpWorld, there is no clear answer: The August fantasy is both fanciful and hopeful, an impossible dream that just maybe can be filled with enough hot air to become a terrifying parade float IRL. How seriously you take the threat is largely a measure of how you evaluate what is being threatened, that being our so-called democracy, which even Joe Biden and the Democrats — after years of aggressively blithe denial — have lately been forced to acknowledge isn't working all that well.

One overlooked but important question that may shed light on this murky narrative is how and why the aforementioned Mike Lindell — who was literally 86'd from the White House in the latter days of the Trump regime, purportedly for proposing a coup attempt that was too extreme for chief of staff Mark Meadows and presidential counsel Pat Cipollone — has worked his way back toward the center of the Trumpian fantasy. On the most basic level, this isn't mysterious: The problem with Lindell, from the point of view of blatantly cynical right-wing operatives like Meadows and Cipollone, is precisely the sincerity and earnestness I mentioned above.

Mike Lindell is a mark. Indeed, he's a high-profile mark, a veritable whale, in one of the biggest con jobs in the long history of American right-wing grift. There's a sucker born every minute, P.T. Barnum supposedly said, but some of them are self-made. Inner-circle Trumpian wise guys like Meadows and Cipollone surely were not averse to staging a pseudo-legalistic coup to overturn the election (as the record makes increasingly clear), but they needed to keep it somewhat within the realm of we're-just-following-the-rules plausible deniability. More to the point, they weren't going to entrust any aspect of planning their coup to a guy from Mankato who got rich (and, honestly, not that rich) running a BOGO pillow scam on the internet, and who they knew for certain was the object of a sustained shakedown by people a lot like them.

Exactly how many millions of Lindell's bedding fortune have been siphoned off to Diamond & Silk, Dinesh D'Souza, "Sheriff" David Clarke and assorted other hustlers, hucksters and self-appointed geniuses from the cobwebbed sub-basement of the pundit-and-consultant class — all of them no doubt assuring him that his great moment of vindication is just over the horizon — is anyone's guess. But if the MyPillow Guy were the tragicomic protagonist of a satirical novel by Sinclair Lewis or Jonathan Franzen — or, let's say, a prestige Netflix series starring Joaquin Phoenix or Christian Bale — by this point in the narrative we'd understand that it wasn't going to end well.

As I observed in an earlier article about "Absolute Proof," his incoherent two-hour "docu-movie" or pseudo-news broadcast or whatever it is, Lindell's most telling delusion is the blithe salesman's confidence that sooner or later we'll all agree with him. He is alternately baffled and reproachful toward the media and the legal system, which have refused to engage with his elaborate and contradictory fables about the myriad ways the 2020 election was corrupted.

That state of affairs, Lindell appears to believe, cannot last. He lost his temper with Salon reporter Zachary Petrizzo last week, but in context that felt more like earned exasperation than outright bile: He cannot understand why Zach (and every other "terrible, horrible" non-OANN journalist who ever talks to him) will not report truthfully on this world-beating story of all time, which Mike himself cannot exactly explain in linear fashion, except to insist that the truth is out there.

Unlike the ex-president he venerates (and virtually everyone around him), Lindell strongly prefers the sunny side of the street. He does not live in a "post-truth" universe where reality is whatever the Leader says it is. He believes in the truth and knows he has seen glimpses of it, and is convinced that at the end of days it will set us all free. Ultimately, he is an optimist, even a utopian (terms that Donald Trump's best friend, if he had one, would never apply to him). That doesn't mean Lindell is not dangerous — quite the opposite, as the history of utopian dreams gone awry ought to make clear. But in politics it effectively renders him an outcast, not to mention an object of pity and scorn to the profoundly cynical Republican political class he is trying to infiltrate.

Consider Lindell's latest indecipherable video collage, published on his website Frank (the one that never quite became a social media platform), which is called "Absolutely 9-0." That refers to his oft-stated belief that once the right evidence is assembled in the right way (presumably by him), we'll all sheepishly admit that we've been had and the Supreme Court will vote unanimously to overturn the 2020 election and return Donald Trump to the White House.

Don't even bother protesting that there's no conceivable legal or constitutional way to accomplish that. As a counterargument, that's roughly equivalent to informing a Santa-believing eight-year-old that the physics of reindeer flight don't make sense. Just stop and ponder the math: Lindell believes, or claims to believe, that in the near future Stephen Breyer, Elena Kagan and Sonia Sotomayor (and of course the other six justices) will accept the inexorable logic of his arguments and vote to "reinstate" the Trump regime. There will be no more partisan division or mutual recrimination. The lion will lie down with the lamb and we who were so very, very wrong about so many things will be humbled and repentant. And generously forgiven, I suspect, in Mike Lindell's imagination.

The only conclusion I can reach here is that as Trump slips further into post-presidential isolation and weirdness — simultaneously the dominant figure in the Republican Party and Old Man Shouting at Cloud — and professional hard men like Meadows and Cipollone drift away to better-paying gigs, zealots and lunatics like Lindell and Michael Flynn (who are very different cases) have clawed their way closer to the exiled prince's throne.

The long-term effects of that mooncalf renaissance are impossible to gauge from here. Trump will not be returned to power in August, and any attempts to make that happen on the far-right fringe — although perhaps extremely unpleasant in the moment — will appear even more benighted and pathetic than Mike Lindell. But another seed has been planted, and whatever sprouts from it will serve to further justify the Republicans' widespread and more or less legal campaign to subvert, undermine and reshape electoral democracy to suit their needs. Trump himself may be rendered increasingly irrelevant, or may stage a comeback even more grotesque than his initial ascension to power. That question, at least arguably, is not all that important.

Either way we have arrived at the situation predicted by sociologist C. Wright Mills more than 60 years ago, when he wrote that "men and women of the mass society," now "driven by forces they can neither understand nor govern," would come to feel themselves "without purpose in an epoch in which they are without power." Mills concluded: "At the end of that road there is totalitarianism." That's the utopian endpoint Mike Lindell longs to wish into being.