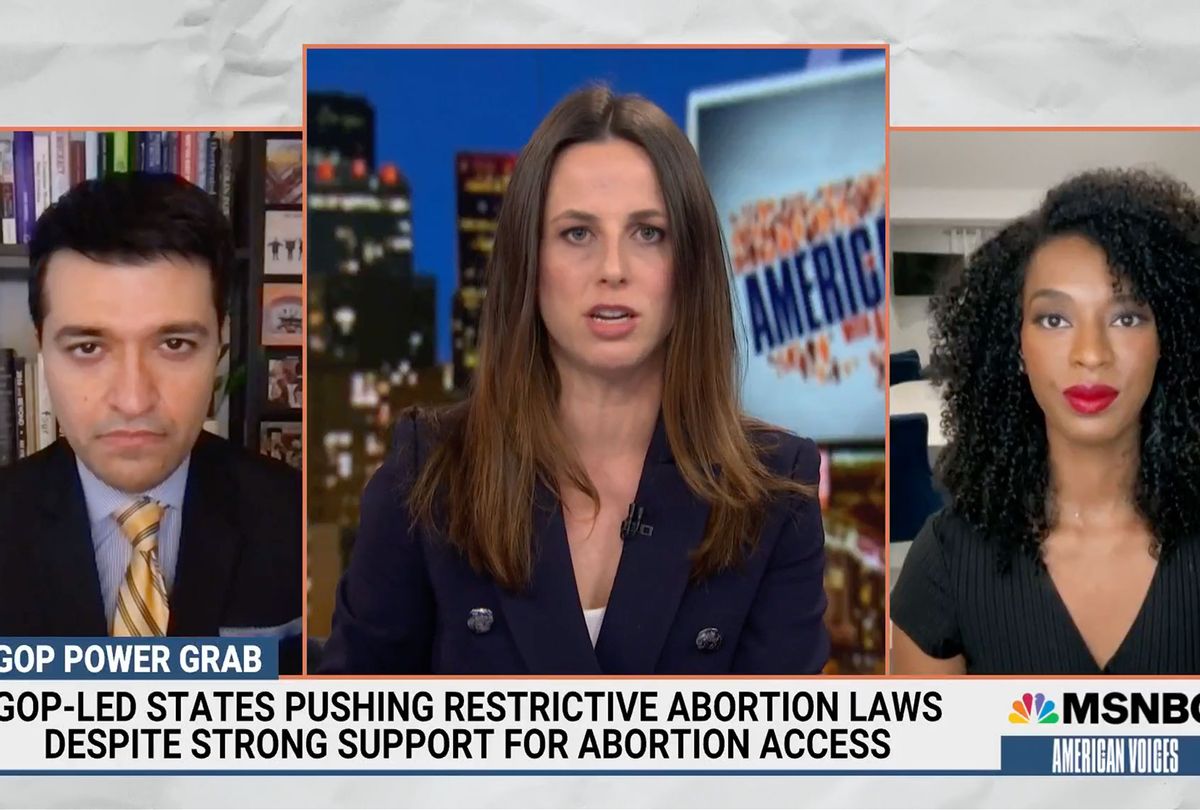 In a New York Times op ed from this week called "The Sound of Silence on Abortion," author Linda Greenhouse ponders why the same institutions and corporations that have taken a stand on issues like voting rights have often turned a blind eye to abortion rights — especially at this time of surging legislative attacks, and a Supreme Court case that could decimate Roe v. Wade.

"It's possible I've missed something, but I've been listening hard, and so far all I've heard is the sound of silence," Greenhouse writes, of lack of action and solidarity from these institutions on the recent Texas abortion ban, and the existential threat at the Supreme Court.

Despite the silence from corporations who conditionally posture as advocates when they predict doing so is profitable, abortion is a popular, evergreen topic among cable media and political pundits. But the only thing as frustrating and predictable as corporate silence is mainstream media and commentators making a political game show out of the existential fight for bodily autonomy.

In a recent segment on how a key abortion case at the Supreme Court could affect the outcome of the 2022 midterms, NBC political reporter Sahil Gupta said, "We can be pretty confident the right is going to be happy about this, and if they are big rulings, this creates an opportunity for Democrats, because on the issue of Roe v Wade, polling shows as much as 70% of the public supports that decision."

He continued, "This all creates an opportunity for Democrats to say, OK we're going to lose at the Supreme Court to galvanize voters and the majority of the country who agree with them on these issues and say, 'You may not be happy with what happened in court but you should show up and vote for politicians who are going to try to counteract these laws.'"

In other words, ahead of major rulings from the court, including Dobbs v. Jackson Women's Health, a case on a 15-week abortion ban in Mississippi that could devastate abortion access, this segment focused on one thing in particular that the case could affect: the 2022 midterm elections. Not women and pregnant people, not people of color and the poor, who are more impacted by bans and restrictions on reproductive care — instead, in the weeks since the Supreme Court announced it would hear the case, legacy media outlets from NBC and CBS to the New York Times have focused on how fear of the future of abortion rights might impact voter turnout.

It's a page out of the playbook of some liberal and progressive male advocates, and others with a bad case of toxic positivity, who have claimed the "silver lining" of dangerous, urgent attacks on reproductive rights is the mobilization of progressive voters. We certainly saw a lot of this messaging when alleged abuser and Supreme Court Justice Brett Kavanaugh was confirmed to the court, weeks before the 2018 midterm elections. The underlying message here is that women, pregnant people and their human rights are a worthy trade in exchange for a supposed bump in votes.

And yet, what this thinking ignores is by that point, the damage will already be done — in 2018, Democratic politicians swept Congress and several state legislatures, with record-breaking voter turnout, especially among women voters. But Kavanaugh, a staunch abortion opponent, was already on the court, where he sits today, about to rule on a key abortion case with five other Justices who either share in his anti-abortion extremism, or have repeatedly been hostile to reproductive rights. And by the time the 2022 midterms roll around, Kavanaugh and his colleagues will already have ruled on a case that could decide the fate of the dozens of state abortion ban legislation proliferating across the country.

Pregnant people's rights aren't bargaining chips to be traded for hypothesized political victories, and the political systems and machinations that empower mostly white men to dictate our bodies, lives, families and futures, aren't a game. They're a manifestation of white supremacist, patriarchal oppression, with existential consequences for women and pregnant folks. Elections play a significant role in all of this, breeding the domination of anti-abortion extremists in state legislatures in the last decade that paved the way for today's political realities. But when the most visible news media would rather fixate on the horse race aspect of things than the real people who will be denied autonomy, economic opportunity, and crucial health care, that's a problem. It's a problem because it reinforces the same dehumanization of people who seek and have abortions, which the anti-abortion movement relies on for its success.

If we want to win, we should empower women and pregnant voters — not prop up the supposed "pros" of their disenfranchisement.

Treating reproductive rights as a political game show isn't the only mainstream media pitfall on this issue. For starters, seriously identifying a segment of American politicians and activists who militantly fight for forced pregnancies and births, but not gun safety or child care, as "pro-life," is one. Selectively paying attention only to the most "extreme" abortion legislation and court cases, as if any policy that would force someone to be pregnant even a day longer than they wish to be isn't extreme, is another problem. This is especially true as hundreds of medically unnecessary bills that are burdensome but fall short of being all-out abortion bans proliferate, and seldom get on the radar of legacy media.

And then, of course, there's the legitimizing of abortion bans and legislation that allow surface-level exceptions for rape, incest, or the safety of the pregnant person. The emphasis on these exceptions in most mainstream media ignores that no one should have to prove they were victimized to a sometimes hostile medical system, or hostile law enforcement, to be eligible for a basic health service. This emphasis also makes day-to-day abortion laws with these exceptions seem normal and humane. They're not.

All of these frequent cable and legacy news pitfalls on abortion rights stem from the same problem. When we limit our societal discussions of safe, legal access to reproductive care to abstraction, and disproportionately offer platforms to those who lack lived experience, this results in a media ecosystem that's more concerned with the political hypotheticals that arise from pregnant folks' suffering, than with our actual suffering. The answer to this is simple: centering and listening to the voices of those for whom reproductive rights aren't just an abstraction, those who have had abortions, those who can speak on the human toll of this legislation. One in four women has had an abortion — finding and listening to one over yet another cis-male pundit on whether or not advocates who fear the end of Roe are "overreacting," isn't hard.