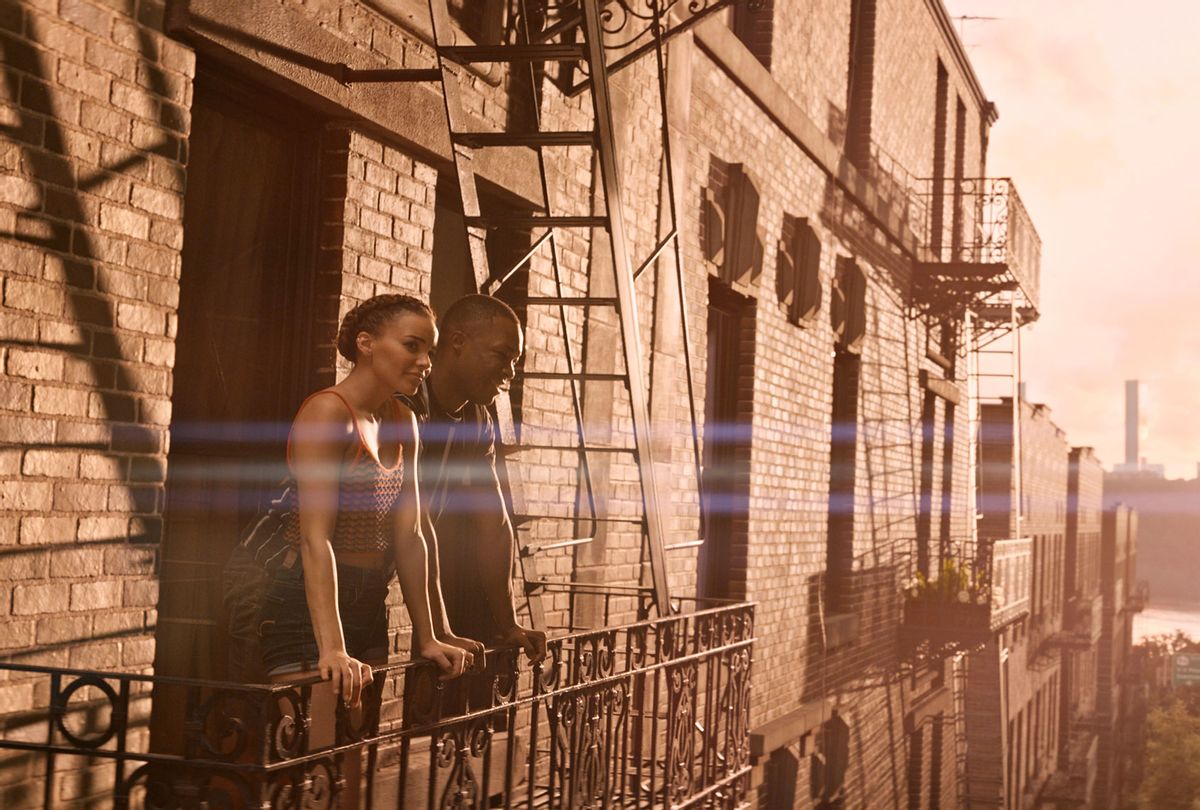 Leslie Grace and Corey Hawkins in "In the Heights" (Warner Bros.)
--

For as long as the movies have existed, they have been in love with New York City. And how could they not? It's one of the few places on Earth where the cacophony of traffic, industrial hubbub, and the subtle whirs of giant flashing ads, can become a symphony. Few films have captured the beautiful sounds of New York like director Jon M. Chu's "In the Heights," a musical that suggests every single New Yorker, regardless of their cultural background, contributes an irreplaceable beat to the city's magnificent score.

From its opening number, the adaptation of Lin-Manuel Miranda ("Hamilton") and Quiara Alegría Hudes' Tony-winning Broadway hit establishes itself as a grand spectacle calling moviegoers to the largest screen they can find. We begin by following our narrator Usnavi ("Hamilton" breakout Anthony Ramos), as he goes about his morning routine en route to the bodega he owns in Washington Heights, a largely Dominican neighborhood in New York City.

It makes sense that Chu finds glory in the mundane by juxtaposing Usnavi's morning journey with bits that show other residents of the Heights preparing for their day. From beauty salon workers and shopkeepers, to parents feeding their children, the film establishes how people strive to fulfill their dreams in a bustling city where they barely have time to sleep. The sequence culminates in a grand dance number in the streets, where it makes the case that it's practically impossible to live in New York and not feel like you're a character in a musical.

By expertly opening up the world of the musical from the confines of a Broadway stage to the real-life locations mentioned in Lin-Manuel Miranda's infectious songs, "In the Heights" has only the sky to reach for, and it makes sure viewers come along for the joyful ride.

With his warm presence, Ramos' Usnavi feels like a modern-day version of a Gene Kelly hero. He's the conduit through which the rest of the lovable characters make their power known. Usnavi dreams of returning to the Dominican Republic where he was born, the land of his ancestors, and through the other characters we get a glimpse of the stars that make up his universe. 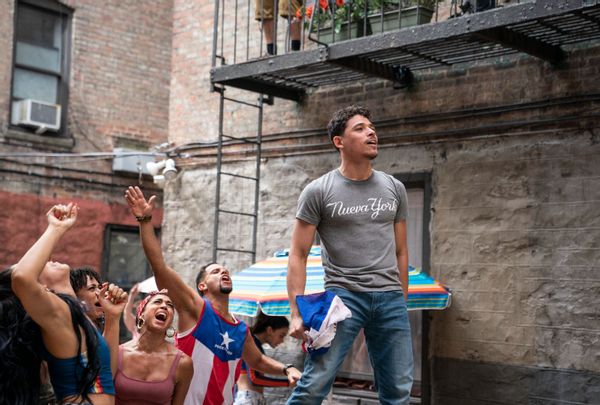 Anthony Ramos in "In the Heights" (Warner Bros.)

There's Vanessa (a dreamlike Melissa Barrera of "Vida" fame), the girl of his dreams, who wants nothing more than to leave the Heights and find fame as a fashion designer downtown. Nina (a luminous Leslie Grace) a student at Stanford who returns home heartbroken by the constant microaggressions she faces in the unwelcoming world of higher education. Noble taxi-dispatcher Benny (the graceful Corey Hawkins) who works for Nina's father, Mr. Rosario (a moving Jimmy Smits), and seems to have found contentment in helping his community travel safely. There's also neighborhood matriarch Abuela Claudia (the kindly Olga Merediz), who albeit childless, has become a local source of wisdom and nurturing.

Hudes, who is also an executive producer and adapted the screenplay from the book of the musical she wrote, is such a generous storyteller, that each of the myriad characters in the film could warrant an entire musical of their own. It's been more than a decade since the Broadway show premiered, and Hudes' screenplay subtly reflects that with mentions of DACA, and other contemporary issues, without turning the film into an exercise in didacticism. She finds worth in everyone's story, and infuses Usnavi with the same spirit.

Ramos shines, but the film is so aware of the richness of the ensemble, that it knows when to share the spotlight with others. In numbers like the spectacular "96,000," in which hundreds of characters fantasize about winning the lottery while frolicking in a public pool, Ramos gently becomes an emcee figure, watching him smile watching his co-stars perform is one of the most joyful things in the film.

The film balances the eclectic musical genres, from bolero to salsa, without losing sight of the story it's telling. In choreographer Christopher Scott and cinematographer Alice Brooks Chu found partners to vibe with. They dazzle with grand numbers like "No Me Diga" set in Daniela's (a scene-stealing Daphne Rubin-Vega) beauty shop, and make hearts skip a beat in "When the Sun Goes Down," a romantic duet in which Benny and Nina perform a gravity-defying dance on the side of the building.

As in the Broadway production, the showstopper is "Paciencia y Fe," a soul-stirring number where Abuela Claudia looks back at the long line of women who came before her and led her to where she is. Merediz, the only actor reprising the role they originated on Broadway (although cameos do appear throughout), carries a fire that burns from within. The sequence set in a subway populated by ghostly ancestors and unaware commuters, epitomizes what the film does best: it celebrates the Latinx people in the U.S., as well as the richness they contribute to the country, without romanticizing their struggles or demanding miracles from them. To exist, the film posits, is miracle enough.

It's this sense of gratefulness, pride, and a reminder of the power of dreams that makes "In the Heights," such a powerful work of art. There is no place for cynicism in a world where we're constantly trying to be our best, to create life for others, to celebrate what we have right now. Even as the characters encounter truly bittersweet moments, the film has patience and faith in every single one of them. It wants them to thrive, to find joy, while reminding them that the American dream is a dream, but not necessarily "the" dream.

"In the Heights" releases in theaters and HBO Max on Friday, June 11.