The broken dream of "In the Heights": Fans praising the film must also acknowledge its shortcomings

Jon M. Chu's new film is a cultural victory, even as it receives legitimate criticism of colorism in its casting 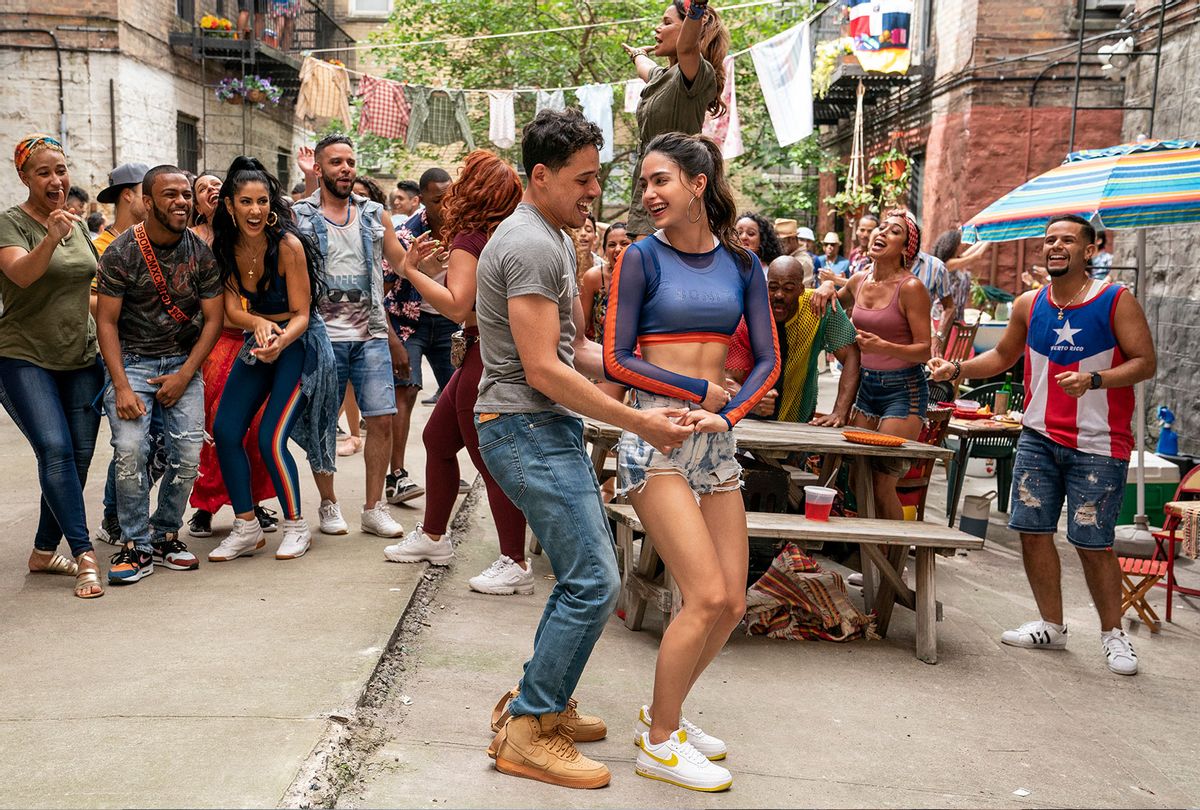 Anthony Ramos and Melissa Barrera in "In the Heights" (Warner Bros.)
--

The film adaptation of Lin-Manuel Miranda's musical "In the Heights" released in theaters and on HBO Max last week to overwhelmingly positive reviews, and with many celebrating its focus on telling the stories of a cast full of Latinx characters. A fun and quintessential American story, "In the Heights" centers around a humble group of people chasing their unique dreams for a better life in the Washington Heights neighborhood of New York City.

But two things can be true at the same time — namely, that the Jon M. Chu-directed movie is a powerful leap for representation and a joyous cultural victory, while also perpetuating colorism, which Chu and cast member Melissa Barrera have disappointingly defended.

Colorism is a frequent and frustrating dimension of many movies that are simultaneously celebrated as representational victories, invoking complicated emotions for many audience members. The backlash and criticism "In the Heights" is facing now should actually be familiar to Chu, from his work on "Crazy Rich Asians." Despite taking place primarily in Singapore, a Southeast Asian country where many people have darker skin tones, "Crazy Rich Asians" cast nearly all fair-skinned, East Asian actors.

Washington Heights is widely known a melting pot of Latinx cultures, and with residents from all over the diaspora, including plenty of Afro-Latinx residents, and with many residents from the Dominican Republic, in particular. The film doesn't capture this reality, with only two Black actors (Leslie Grace, who is Afro-Latina, and Corey Hawkins) in leading roles (with Dascha Polanco who plays a supporting role identifying as Afro-Dominican), and boasting a cast that Refinery29 has pointed out is quite "white-passing."

In an interview with The Root, Chu acknowledged the criticism of "In the Heights" for perpetuating colorism, but also defended the casting decisions, saying the actors they chose were ultimately "best for the role." In a different interview, Barrera, who plays Vanessa in the movie, even notes that "there were a lot of Afro-Latinos" at the auditions, although this doesn't exactly help the movie's case against accusations of colorism, when these actors ultimately weren't chosen. If anything, it makes the criticisms even more valid — there was plenty of talent to choose from, only for lighter-skinned actors to be deemed, in Chu's words, as "best for the role."

"I think they were looking for just the right people for the roles," Barrera said, echoing Chu. "For the person that embodied each character in the fullest extent."

Later on Monday, Miranda weighed in on Twitter and offered a more heartfelt apology. His statement, in part, reads:

I started writing In The Heights because I didn't feel seen. And over the past 20 years all I wanted was for us – ALL of us – to feel seen. I'm seeing the discussion around Afro-Latino representation in our film this weekend and it is clear that many in our dark-skinned Afro-Latino community don't feel sufficiently represented within . . .

In trying to paint a mosaic of this community, we fell short. I'm truly sorry. I'm learning from the feedback, I thank you for raising it, and I'm listening . . . I promise to do better in my future projects, and I'm dedicated to the learning and evolving we all have to do to make sure we are honoring our diverse and vibrant community.

"In the Heights" follows a long line of movies that offer powerful representational victories, while also leaving more to be desired, and plenty of room for improvement. Grace, one of the movie's two main Black actors, expressed a desire to see this improvement: "I do hope to see my brothers and sisters that are darker than me lead these movies," she said.

Communities of color who ask for more of the entertainment that's created for them shouldn't be dismissed or told to settle. The entertainment industry can always do better — especially when it's had so much time, spent primarily creating for white audiences for years, to get it right. Of course movies about people of color face greater scrutiny, when there are unfortunately so few that the ones that do exist are asked to encompass so much. That, of course, isn't to say there's any excuse for the exclusion of Afro-Latinx or more darker-skinned characters in "In the Heights," especially when many call Washington Heights home in real life. In addition to "In the Heights," there should be many more movies centering Afro-Latinx and darker-skinned people, in general.

After all, the problem of colorism is all-too-familiar in nearly all communities of color, and forces darker-skinned people of color from all races to grapple not just with external racism, but also colorism from within their own communities. The last thing we need is stories that are meant to be a joyful, progressive victory for us, marred by reminding us of this everyday, unacceptable intolerance.

"In the Heights" is ultimately an important reminder that movies and our reactions to them can be multidimensional, that we can celebrate the wins and productively discuss what can and must be improved to ensure more people feel seen, and more people's stories are told. Once again, Chu's own "Crazy Rich Asians" sparked important dialogue about the need for stories about Asian characters who aren't "crazy rich," and representation of Asian communities that defy white stereotypes and expectations about them, including that they're all wealthy and traditionally successful.

There are high standards for movies like "In the Heights," or any storytelling that finally centers people of color, because, frankly, audiences of color have been waiting long enough. Of course our expectations are high, and of course we expect and demand for none of us to be left behind! When movies continue to play into colorism, no matter how diverse their cast is, they're still, on some level, enabling white supremacy, and still trying to keep white audiences comfortable. The progress made by "In the Heights" is progress we've got to continue to build upon.

"In the Heights" is in theaters and streaming on HBO Max.

Colorism Commentary In The Heights Movies