Why anti-vaxxers are stuck on the "magnetic vaccine" conspiracy theory 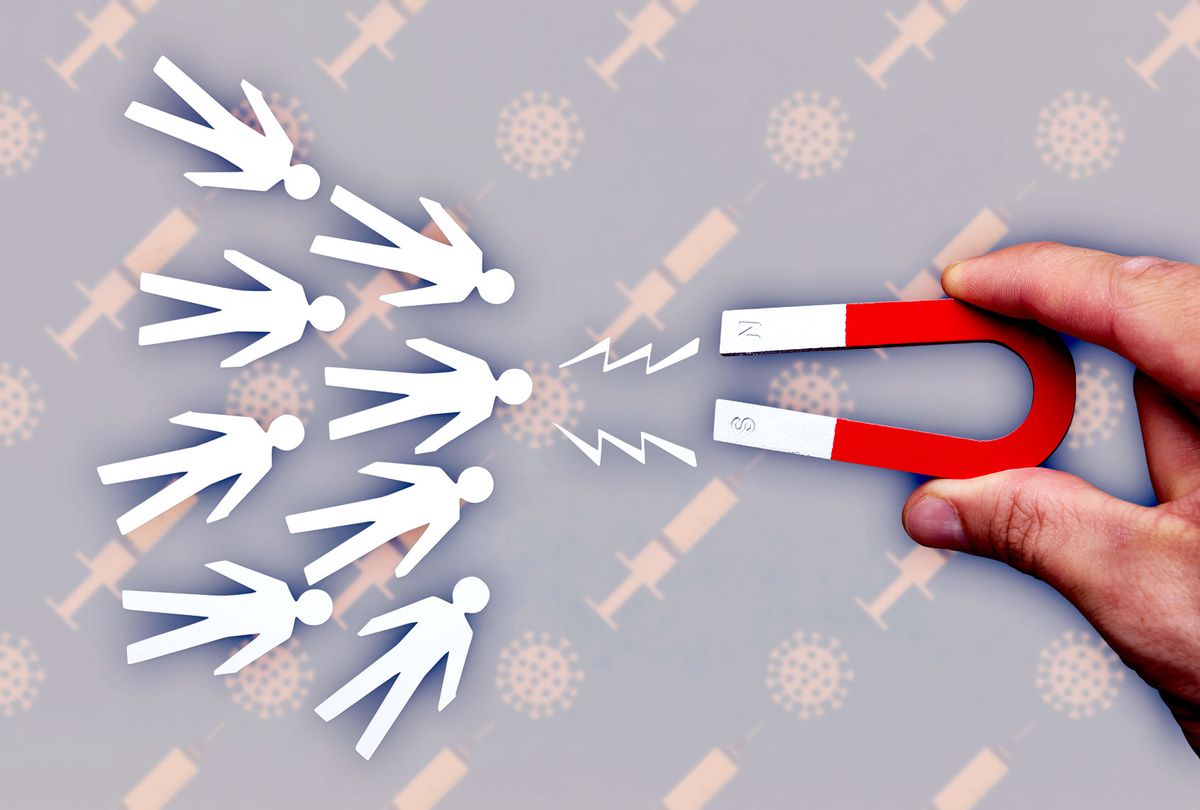 Tik Toker Brookiebaby888 usually posts humorous lifestyle videos to her 73,000 followers, but earlier this month she filmed herself doing a "magnet vaccine test." Standing in front of her camera, she explained to users that she just received her COVID-19 vaccine and wanted to see if a magnet would stick to her arm. Pressing the round magnet to her deltoid, she gasps in surprise when it barely sticks.

Brookiebaby888 is one of thousands who have done the "vaccine magnet test" on Tiktok, perpetuating the conspiracy theory that the COVID-19 vaccine includes an unidentified magnetic object — maybe a microchip — causing a side effect of becoming magnetic (which is not true). It's unclear if people like Brookiebaby888 are true anti-vaxxers, or just participating in yet another viral social media challenge with deleterious public health effects.

Recently, the conspiracy theory was popularized and brought to the mainstream when Sherri Tenpenny, a confidant and adviser to MyPillow CEO Mike Lindell and self described anti-vaxxer, spoke about it at a hearing held by a health committee in the Ohio state legislature.

"I'm sure you've seen the pictures all over the Internet of people who have had these shots and now they're magnetized," Tenpenny said. "They can put a key on their forehead. It sticks. They can put spoons and forks all over them and they can stick, because now we think that there's a metal piece to that."

Misinformation experts say testimonies like Tenpenny's promoting vaccine misinformation, along with the viral videos on social media doing the "magnet test," harm public confidence in the vaccines. The very real public health risk posed by the spread of such misinformation speaks to why people like Tenpenny need to be deplatformed from social media, Imran Ahmed, CEO of The Center for Countering Digital Hate (CCDH), told Salon.

"It's profoundly irresponsible to give them uncritical oxygen given that these are publicity hounds who are seeking to sell their product," Ahmed said. "Every time they're given the oxygen of publicity, they become more powerful."

Ahmed suspects that the hearing in Ohio that went viral was likely a publicity stunt for Tenpenny to gain new followers and make more money. Tenpenny is listed as one of the top 12 leading anti-vaxxers according to the CCDH; Robert F. Kennedy Jr., Andrew Wakefield, and Joseph Mercola are also on the list. The CCDH estimates that Tenpenny — who is a practicing osteopathic physician and alternative health entrepreneur who offers "boot camps" in becoming an anti-vaccine activist — makes $2.1 million from these programs collectively, according to the CCDH's report titled "Pandemic Profiteers."

"This is all an enormous scam,"  Ahmed said. "For them, it's a war of attrition, and the war of attrition is that, let's just say 10 people believe that they can magnetize them — they happen to stick a key to themselves because they're in the middle of a heatwave and it's a hot and sticky and it sticks to them — and they think, 'Oh my god, the vaccine is magnetic.'"

"That's why social media has been so powerful for them," Ahmed continued, "because they've been able to push out misinformation and then slowly start accruing followers without ever necessarily paying the cost for it."

As Ahmed alluded to, it is likely that some people who participate in the vaccine magnet challenge will believe that, for some reason, the COVID-19 vaccine has a mysterious magnetic metal in it like iron, nickel, or cobalt. According to a fact sheet on the FDA's website for the Pfizer-BioNTech COVID-19 vaccine, the vaccine contains only mRNA, lipids, potassium chloride, monobasic potassium phosphate, sodium chloride, dibasic sodium phosphate dihydrate and sucrose — none of which are ferromagnetic.

For the record: Though it's been debunked time and time again — including by the Centers for Disease Control and Prevention (CDC) — the COVID-19 vaccine does not make a person magnetic. The reason the magnets or keys are briefly sticking to some, Deputy Lab Director Eric Palm of the National High Magnetic Field Laboratory told BBC News, could be trickery or simply the cause of excess oils on the skin.

"You can easily get a coin to stick to your skin, we've all done that as children — sticking coins to our foreheads," Palm said. "Because of the surface oils, surface tension associated with that... or someone could be using trickery, [such as] band-aid residue or sticky substance."

There are certainly instances of such simple trickery; for example, TikTok user Emilaay442's video of doing the magnet challenge went viral when the magnet stuck. But, as she later explained to BBC News, it was meant to be a "joke" and she actually licked the magnet before applying it to her skin.

So where did this bizarre, dangerous myth come from exactly? It's unclear. In her testimony, Tenpenny suggests that there's something magnetic in the protein being injected, or something related to "5G towers," meaning cell phone radio towers. (Notably, 5G or "fifth generation" cellular technology requires much smaller and less intrusive radio towers than previous generations.)

"One is that COVID isn't dangerous, the second is that vaccines are dangerous, and the third is that you can't trust doctors," Ahmed said. Anti-vaxxers "throw out everything" and see what sticks, Ahmad continued. "We've been told that vaccines will do everything from magnetize you to kill you, to all sorts of idiocy — this just happens to have caught fire because of this profoundly hilarious video of Sherri Tenpenny."