America's grotesque economic inequality hurts everyone. But can we at least quit pretending it's race-neutral? 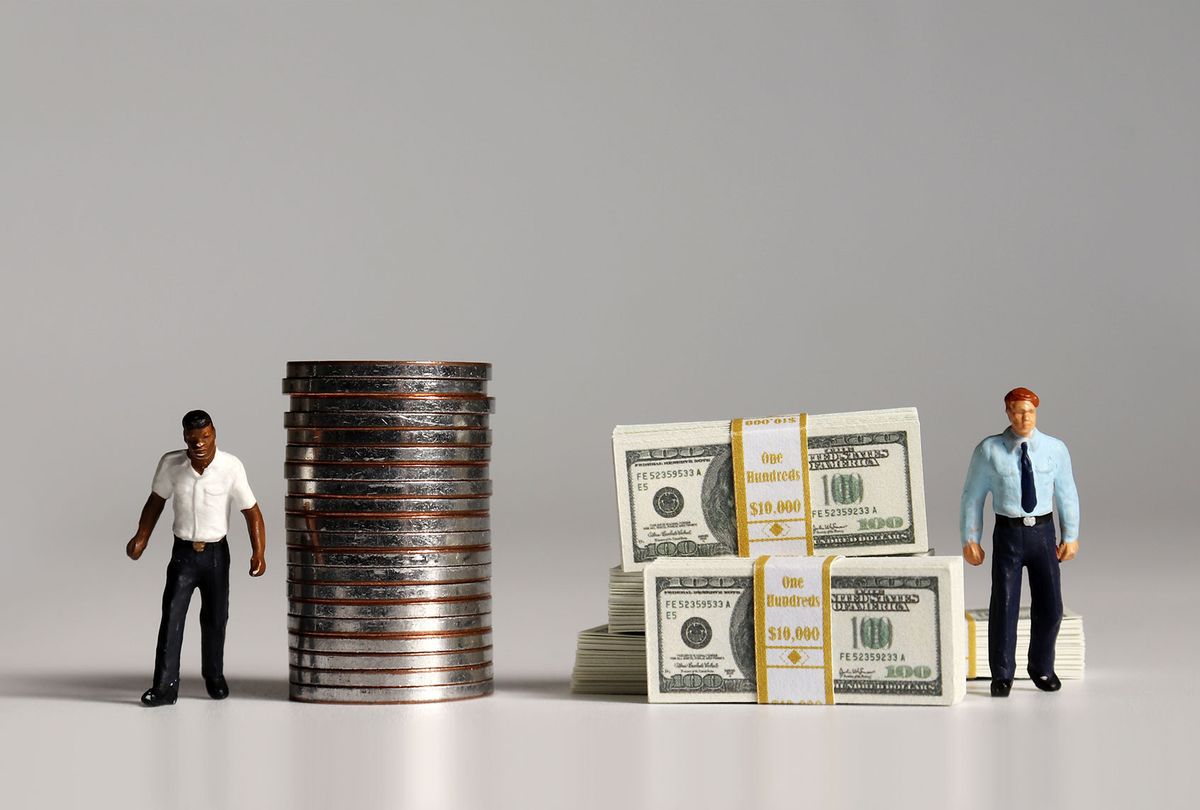 American society is structured around racism, white supremacy and protecting the unearned advantages of white people as a group. That is not hyperbole or an accusation. It is a fact.

It's true that these power relationships across the color line are not fixed, static or permanent in terms of how they manifest across American society. But it is equally true that American society from the founding to the present has been structured to maintain the dominance and power of those individuals and groups who are considered "white" over and above those who are considered "nonwhite".

To claim that American society is not structured around protecting white advantage (or "white privilege") is to engage in willful ignorance, at best, or to employ intellectual dishonesty on behalf of white supremacy, at worst. Denying the existence and persistence of racism has almost become religious dogma for many white people (and for some Black and brown people as well). Such denial is an act of faith, not based on facts and empirical reality.

When truths about America's past and present, about the color line and racial inequality, are pointed out to racism deniers, they receive those truths as a narcissistic injury, a literal attack on their sense of self.

That psychological dynamic helps explain why those who tell uncomfortable truths about American society and the color line are viewed by the white right and "conservatives" more generally as social and political heretics, as seen in the concerted attacks on the New York Times' 1619 Project and "critical race theory."

New research by the Reflective Democracy Campaign adds to the evidence that American society is structured around protecting white (male) privilege and power. As the Guardian summarizes, white men are about 30% of the population but hold 62% of public offices, "dominating both chambers of Congress, 42 state legislatures and statewide roles across the nation":

By contrast, women and people of color constitute 51% and 40% of the US population respectively, but just 31% and 13% of officeholders, according to the research by the Reflective Democracy Campaign, shared exclusively with the Guardian.

"I think if we saw these numbers in another country, we would say there is something very wrong with that political system," said Brenda Choresi Carter, the campaign's director.

"We would say, 'how could that possibly be a democratic system with that kind of demographic mismatch?" ...

Two factors perpetuate white male control over virtually every lever of US government: the huge advantage enjoyed by incumbents, and the Republican party's continued focus on mostly white male candidates.

Another obstacle to a more representative government comes from the Republican establishment, which does not run candidates reflective of the nation. In the 2020 primaries, 93% of Republican candidates were white, and fewer than one in four were women.

Democratic candidates, the report continues, "were 44% women and 32% people of color," not quite a match to the nation's overall demographics but "far more inclusive than the GOP's virtual erasure of entire communities." That partisan divide creates a political climate in which policies supported by substantial majorities cannot win legislative approval, including gun control laws, automatic voter registration and a national living wage.

This is the America that today's Republican Party and its neofascist movement are so desperately trying to defend.

Racism and white supremacy do not exist in isolation. They intersect, overlap and work through such social identities as gender, class, sexuality, ethnicity, religion and ability status. As the British sociologist Stuart Hall famously observed, "race is the modality in which class is lived, the medium in which class relations are experienced."

Even if unintentionally, the much-discussed new investigative report from ProPublica on how America's richest individuals pay little or nothing in taxes reveals the relationship between race and class in stark detail. The trove of revealed IRS data, ProPublica reports,

demolishes the cornerstone myth of the American tax system: that everyone pays their fair share and the richest Americans pay the most. The IRS records show that the wealthiest can — perfectly legally — pay income taxes that are only a tiny fraction of the hundreds of millions, if not billions, their fortunes grow each year.

Many Americans live paycheck to paycheck, amassing little wealth and paying the federal government a percentage of their income that rises if they earn more. In recent years, the median American household earned about $70,000 annually and paid 14% in federal taxes. ... The confidential tax records obtained by ProPublica show that the ultrarich effectively sidestep this system.

ProPublica undertook a novel form of analysis, comparing "how much in taxes the 25 richest Americans paid each year to how much Forbes estimated their wealth grew in that same time period." Those 25 individuals "saw their worth rise a collective $401 billion from 2014 to 2018," during which time they paid a collective total of $13.6 billion in federal income taxes. That's a "staggering sum," the report concludes, but "amounts to a true tax rate of only 3.4%."

A new report from the Institute for Policy Studies reveals a similar story of Gilded Age robber baron-style riches, in which the wealthiest American families have rigged the tax code and the legal and political system to their extreme advantage. In practice, the United States is a country where poor, working and middle-class people subsidize the ultra-rich.

Some have described such income and wealth inequality as a "wealthocracy," which is actively threatening the stability of American democracy and society. That last part is true enough, but to label America's plutocracy using race-neutral language is to willfully ignore the role of racism and sexism in creating and perpetuating such a system. Nearly all the richest Americans described in these reports are white men. As such, the "wealthocracy" has both a racial and gender identity.

Understood in total, extreme wealth and income inequality pose a critical danger to America's long-term social, economic and political stability — and racism and white supremacy are key elements of this crisis.

In a 2020 report, economists and other researchers estimated that anti-Black racism has cost the U.S. economy $16 trillion over a 20-year period.

New research from the McKinsey consulting firm indicates that 19% of Black American households have negative wealth, compared to 8% of white households. Social scientists have estimated that the wealth gap between median Black households and median white households is enormous: The figure is $24,000 for the former, and $188,000 for the latter. If motor vehicles are removed as an asset in these calculations, the racial wealth gap is even more extreme.

In the aggregate, white households possess 84% of the country's wealth, while Black households own just 4%. These disparities are largely the result of centuries of government policies that have subsidized the creation of white intergenerational wealth, while denying Black and brown Americans those same financial resources and other opportunities. Examples stretch from the history of white-on-Black chattel slavery and Jim Crow to racial pogroms and other forms of violence to the GI Bill and FHA/VA home loan programs, housing segregation and the creation of postwar suburbia, through to the predatory mortgage and lending practices of recent years.

Defending American society from the Jim Crow Republican Party and its campaign against multiracial democracy demands that we must understand wealth and income inequality as inseparable from racial justice.

To that end, Democrats, liberals, and progressives should embrace a narrative frame of "wealth justice," making clear that such egregious inequalities are deeply connected to questions of democracy and opportunity and upward mobility for working and striving Americans on both sides of the color line.

For reasons of their own self-interest, white Americans should come to understand how racism and white supremacy hurts them as well. We cannot hold our breath waiting for such an epiphany: White Americans have had centuries to reach such an awakening. But if enough Americans of all colors can come to see how deeply and intimately race, class and inequality are intertwined, there may yet be hope for saving the country from Trump and the Republican Party's neofascist movement.