Amazon's union-busting plan was almost certainly crafted by legal experts. But everything about that is a secret 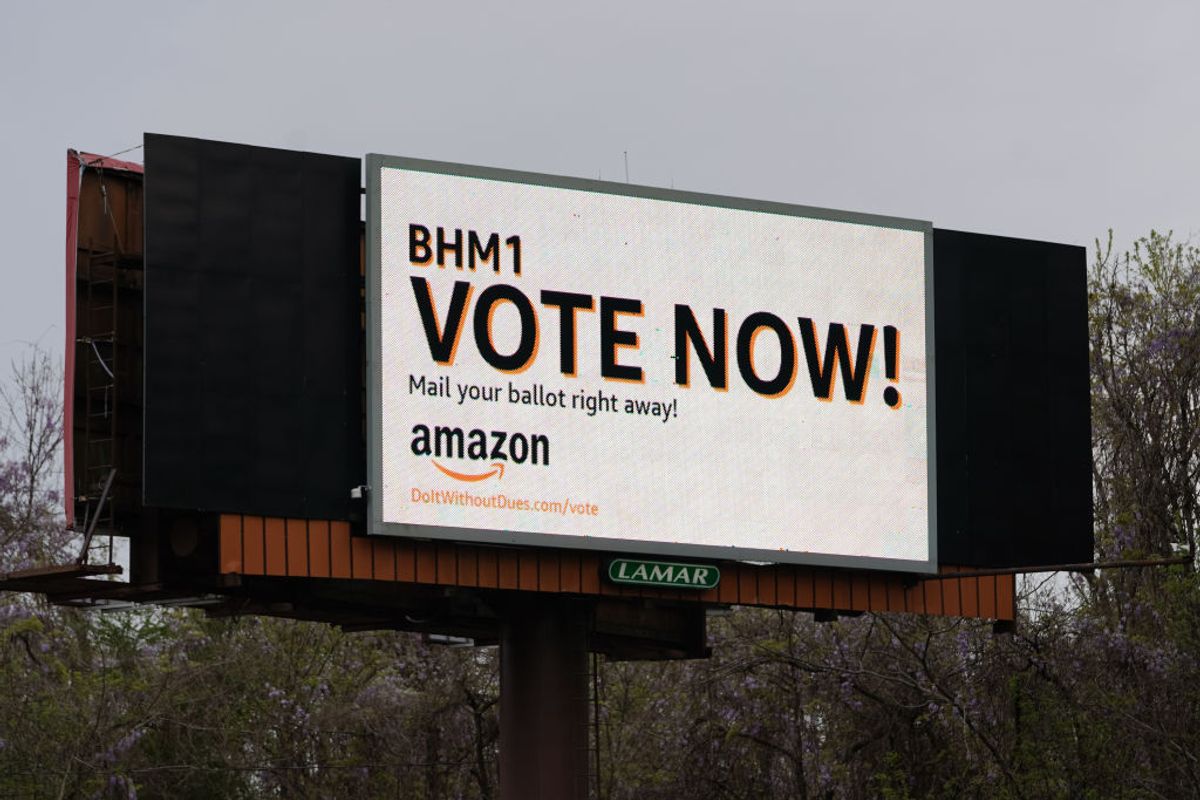 An Amazon-sponsored billboard urging employees to return their unionization ballots is seen on March 28, 2021, in Bessemer, Alabama. (Elijah Nouvelage/Getty Images)
--

Over the past year, we've seen Amazon, the e-commerce Goliath which employs 1.3 million people (roughly equivalent to the entire population of Dallas), launch one of the most aggressive anti-union campaigns in modern corporate history, successfully quashing a months-long employee-led organizing effort at a company warehouse in Bessemer, Alabama.

That saga began early in 2021, when Amazon learned that its 5,800 warehouse workers in Bessemer were considering a contract with the Retail, Wholesale and Department Store Union. That prompted the company to roll out a series of union-busting tactics that varied in effectiveness and sophistication.

Amazon inundated its Alabama employees with sometimes-confrontational text messages and posters preaching the ills of unions, and forced them to attend "captive audience" meetings, where representatives delivered sober lectures on the downside of an organizing drive. In some cases, workers were compelled to have to one-on-one sitdowns with managers, where they'd be cajoled into voting against the effort. Amazon even coordinated with Bessemer city officials to change a traffic signal so union organizers couldn't get too close to the warehouse.

It worked. In April, after months of political buildup, Amazon's Bessemer workforce overwhelmingly voted against forming a union. Labor activists accused the company of coercive tactics designed to scare its workers into submission, but many of them didn't mention — and perhaps didn't even realize — that Amazon management didn't come up with that strategy all on its own. Hardly anyone discussed the role of Morgan Lewis, the "union avoidance" law firm that almost certainly designed and directed a detailed plan to defeat the organizing drive in Alabama.

We don't know for certain what role Morgan Lewis played, because everything about the union-avoidance business happens in the dark, and firms like Morgan remain almost invisible to the public and the mainstream press. They are believed in legal and business circles to wield immense influence in union-busting campaigns — but there's not much reliable public information by which to gauge the scope of that influence, or to put a price tag on these firms' campaigns.

According to a 2019 estimate by the Economic Policy Institute (EPI), U.S. employers spend nearly $340 million per year on union avoidance services. The EPI also found that by the early 2000s, about 75% of all employers facing union elections involving 50 or more voters retained a union avoidance consultant. It appears there are four big law firms that dominate the business: Littler Mendelson, Ogletree Deakins, Jackson Lewis and Fisher Phillips.

Firms like these specialize in delivering advice to their client companies employers on how to extinguish union efforts and push the envelope of labor law without violating it, says Catherine Fisk, a professor of law at the University of California, Berkeley.

"There are these fine distinctions in what can be said and not be said" when it comes to employers discouraging employees from joining a union, Fisk told Salon. "The law has essentially incentivized companies to walk right up to the line of threatening their workforce."

Employers "pay lawyers a great deal of money to tell them how to threaten without 'threatening,' coerce without 'coercing' and, above all, make sure that employees only hear one side of the story," she explained.

In recent years, labor advocates have railed against many of the questionable practices involved in "union avoidance," in which employers observe the letter of labor law while coming right to the edge of outright "coercion," a practice forbidden by the National Labor Relations Act.

One such method involves the "captive audience" meetings mentioned above, where employers force workers to attend mandatory "informational" sessions designed to dissuade them from unionizing. (Since such meetings occur on the clock and workers are paid their normal wage to attend, they don't violate labor laws.) Virtually all such meetings take place in private without union representatives present, and in some cases can leave workers feeling threatened.

Michael J. Lotito, co-chair of Littler Mendelson's Workplace Policy Institute, told Salon that such meetings can fairly be considered "informational," because sometimes "the union has not provided the individuals with a copy of its constitution."

In 2014, a leaked recording of one of Target's captive audience videos (originally released by Gawker) offered a glimpse into the subtle wording employed by company representatives that sought to discourage employees from unionizing. The video explains: "If Target faced rigid union contracts like some of our competitors, our ability to serve our guests could suffer dramatically — and with fewer guests, what happens to our team?" If employees voted to unionize, the video continued, "chances are [it] would change our fast, fun and friendly culture, with their way of doing business."

According to an EPI study from 2009, about 90% of employers facing union election campaigns used captive audience meetings between 1999 and 2003. The study also found that about 70% of employers held "supervisory one-on-ones," where employees would sit down individually with managers to discuss their union efforts.

Rebecca Kolins Givan, an associate professor at the School of Management and Labor Relations at Rutgers University, told Salon that union avoidance law firms have "perfected" a "convoluted application of labor law where the difference between saying something legal and illegal is essentially impossible to discern for anyone except highly, highly trained lawyers but keeps the clients on the right side of the law."

As previously mentioned, a large part of what keeps the union avoidance industry running is the fact that corporations are able to retain legal services quietly and with almost no public scrutiny. That's possible, at least in part, because of lobbying efforts that curtailed the "persuader rule," a legal requirement that could compel union-avoidance law firms to publicly disclose the details of their services to corporate clients.

In 2016, the Obama administration fought for an expanded version of the persuader rule — and encountered stiff opposition from the American Bar Association and several major law firms, who lobbied against the rule, writing to Congress that it would "seriously undermine both the confidential attorney-client relationship and employers' fundamental right to legal counsel."

A coalition of 23 law professors wrote a letter to Congress, however, to argue precisely the opposite, contending that the Obama-era persuader rule could "exist comfortably within the lawyer's obligations" under the ABA's rules of professional conduct.

Though that rule was never actually applied, it was informally shot down later that year by a federal judge, who called the rule "defective at its core." That judge heavily drew on talking points provided by the union-avoidance industry and the ABA, writing that the Obama-era rule "contains reporting requirements that are inconsistent with and undermine the attorney-client relationship and the confidentiality of that relationship," as Bloomberg Law noted. In 2018, the rule was officially axed by the Department of Labor under then-President Trump.

Perhaps most controversially, the rule would have required law firms to disclose advice they provided to employers about union-busting, even if the law firm did not have direct contact with employees. Labor rights advocates have argued that merely providing "advice" should not create an exemption from the reporting requirement.

"When lawyers are providing legal services in connection with certain kinds of activity," Fisk said, "they can be required to disclose the fact of their representation. For example, they have to register as lobbyists if they're engaged in lobbying activity. The persuader rule does no more than that."

Givan echoed that sentiment, observing that there are many "federal regulations around transparency and reporting, and this doesn't seem to be out of the ordinary." She continued, "It just seems to be closing a loophole in a regulation that's been on the books for decades. It seems overly dramatic to say that closing a loophole compromises something as significant as attorney-client privilege."

Union-avoidance lawyers, unsurprisingly, have responded by claiming that the Obama-era rule would have imposed a substantial burden on both them and their clients. Lolito told Salon that rule would have created a "massive reporting obligation."

That does seem to overstate the case. The Obama-era reporting requirements would have involved making public a client's name, the nature of the legal services provided and the fees charged. Givan observed that the real issue here might be public relations, meaning that if such details were widely known, union-avoidance firms and their clients could face significant blowback, which may be why they're so intent on fending off the persuader rule.

The ABA, for its part, has insisted it "is not taking sides on a union-versus-management dispute" by lobbying against the persuader rule, only taking a principled stand  in support of "defending the confidential attorney-client relationship and right to counsel."

Fisk called the bar association's position "wrong as a matter of law," noting that "the fact of representation is not privileged under the attorney-client privilege." She continued, "Lawyers never like to disclose anything they don't want to disclose. The ABA has long advocated for lawyers to be exempt from various disclosure requirements because the ABA is controlled by lawyers."

Givan agreed, saying that the ABA seems to have "engineered a justification to protect their business."

Lolito, the attorney with union-avoidance firm Littler Mendelson, essentially tried to flip the script in an interview with Salon, saying that avoidance services are necessary and important because unions are often dishonest about what they're offering to employees. "If unions were under an obligation to be completely transparent about what it is they provide employees with respect to information before someone signs a card or submits to a union," he said, "the [pro-union] argument may have some validity to it."

There have certainly been cases of prominent union leaders being charged with corruption, including racketeering, bribery and fraud. So it's not unreasonable to argue that unions are sometimes less than forthcoming about how members' dues are spent. Earlier this month, former United Auto Workers president Gary Jones was sentenced to 28 months in prison for his part in a $1.5 million embezzlement scheme — and his predecessor, Dennis Williams, was sentenced on related charges in May. But it would be profoundly unfair to suggest that such betrayals of trust are representative of the union movement as a whole.

Democrats in Congress have recently tried to revive the persuader rule as part of the Protecting the Right to Organize Act (PRO Act), which expands protections granted to workers under the National Labor Relations Act. This new bill, which proposes stiff penalties on companies that try to coerce workers to oppose a union drive or that retaliate against workers who support one, would ban forced attendance at "captive audience" meetings, and would reinstate the persuader rule and require union-avoidance firms to disclose more information about their services.

The bill passed the House last year, but faces a steep uphill battle in the Senate, given the dearth of GOP support and the unbreakable wall of the filibuster. Various lobbying efforts against the PRO Act's persuader rule portion have emerged from predictable sources, as the Daily Poster has reported.

Union advocates haven't given up the fight. As Vox reports, dozens of unions have lined up in support of the bill, along with such progressive advocacy groups as MoveOn, Indivisible, Democratic Socialists of America, the Working Families Party and the Sunrise Movement.

If passed, the PRO Act would establish the fundamental principle that knowing about union-avoidance practices is a matter of public interest. Although the entire issue is by definition legalistic and wonky, Fisk insists that it's important. "The public has a right to know that Amazon has retained Ogletree or Littler and paid them X million dollars in connection with persuading workers to vote against a union," she said, because in such instances a major corporation is "spending company money in ways that affect the public interest."