Kent State "gun girl" Kaitlin Bennett — too extreme even for the Trump campaign?

Gun-toting young Trump enthusiast outraged — for some reason, ex-president's staff has barred her from rallies 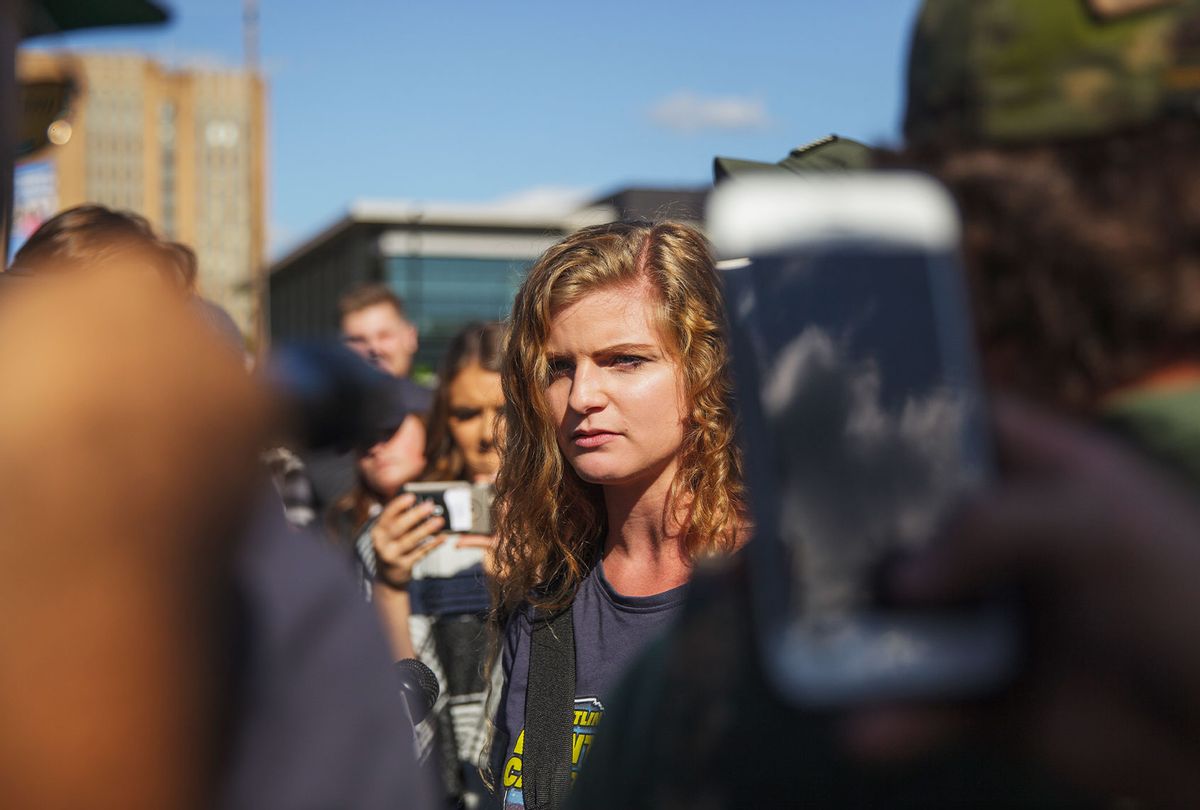 Kaitlin Bennett, a a squad of Three Precenter Milita members and a wall of police, tried to debate counter protesters. (Shay Horse/NurPhoto via Getty Images)
--

Infamous right-wing activist and gun enthusiast Kaitlin Bennett, best known for her role in a Turning Point USA "diaper protest" that backfired in public humiliation, as well as for attempting to trigger liberals on college campuses, has an unusual problem on her hands: Donald Trump's official campaign-style operation wants nothing to do with her media website or her "reporting."

After being denied a press pass, Bennett took to social media to express her frustration over the situation. "We applied for media credentials for the upcoming Trump rally and were promptly denied. Why do the people around Trump keep trying to alienate their biggest supporters that have risked injury, doxxing, censorship, and harassment to promote his campaign?" she asked on the far-right social media site Gab, posting from her "Liberty Hangout" account.

A website notice from the Trump camp showing that both Bennett and her video producer had been denied press credentials was attached to the Gab message. Bennett has become a low-level MAGA Twitter celebrity by producing "person on the street"-style videos that are occasionally picked up by more prominent right-wing outlets, with the evident goal of generating outrage on the right over what liberals supposedly believe.

Bennett's rhetoric aimed at Trump's support personnel kept going. "Trump is banned from social media, as are many of his voters. Others are in jail for supporting him. The media won't cover his rallies," she wrote. "Those that do like RSBN get banned. Along comes Liberty Hangout with a reach of millions, and the Trump team bans us from giving a voice to his voiceless supporters. Apparently hoping that the left will one day like Trump is more important than the people that already do."

Salon's request for comment to the Office of Donald Trump, which oversees Trump rallies, wasn't returned on Tuesday regarding the matter.

A right-wing radio pundit who is familiar with TrumpWorld drama, told Salon that they believe the press-credential snub could be related to Bennett's minor Twitter tiffs with fellow MAGA loyalists, such as Covington Catholic student turned Mitch McConnell campaign staffer Nicholas Sandmann. But that source still professed bewilderment about why the Trump camp would freeze Bennett out, given her 600,000-plus YouTube subscribers.

Bennett, a former InfoWars personality, made her first splash in TrumpWorld in 2018 after taking college graduation photos with a semi-automatic rifle slung over her shoulder. "I believe that if the government has it, we should have it. Machine guns — any weaponry," she told The Washington Post at the time, while protesting Kent State University's gun policy.

On Saturday, according to Vice News, two "QAnon influencers" were given press credentials to the Trump rally, which is not likely to soothe Bennett's fury.

Following publication, it was brought to the attention of Salon that Bennett reportedly espoused a series of anti-Semitic remarks in online forums with members of her "Liberty Hangout" organization. In addition, back in 2016, her group floated Holocaust denial in a Twitter poll asking followers if they "believe the Holocaust happened as we've been told," according to Snopes.