The importance of being Sylvie, a Loki unlike any other, who named herself

Female tricksters are rare. Marvel's choice to introduce Sylvie, and have her steal the show, is significant 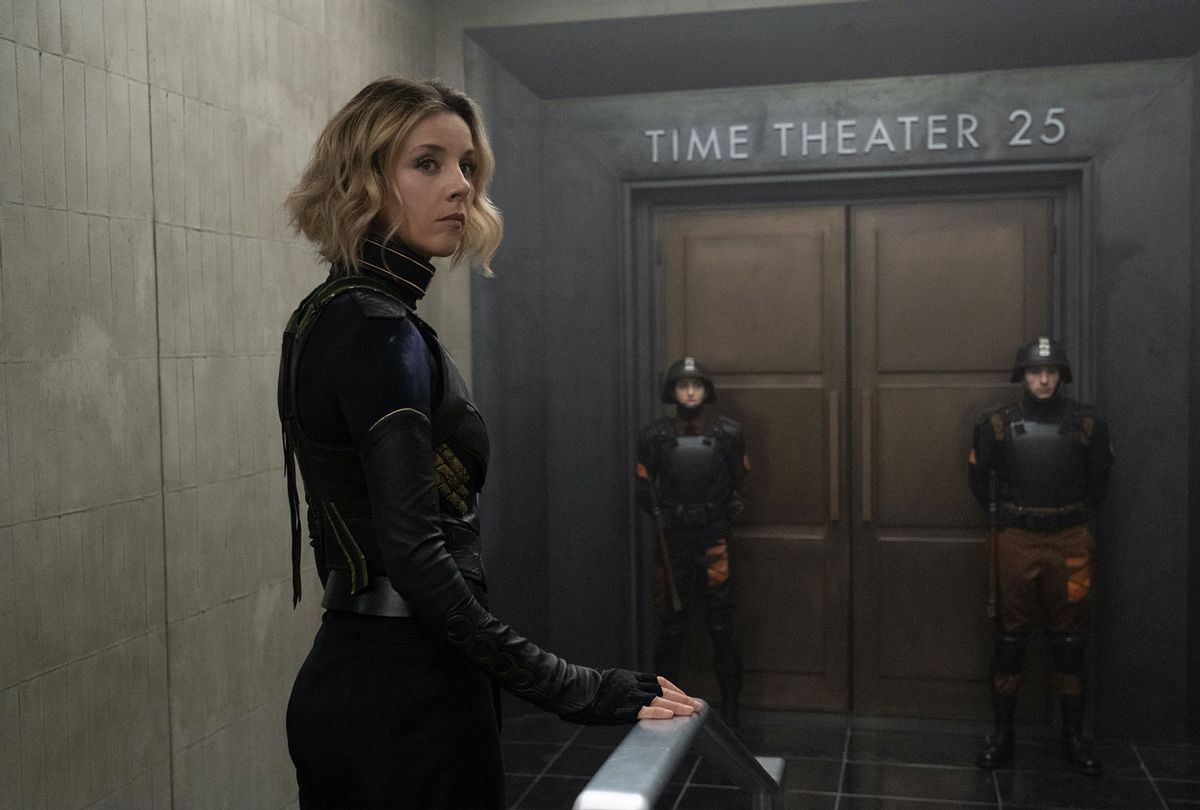 For a series that has managed to keep the audience beguiled and bewildered for five episodes into a six-part season, perhaps the greatest trick Marvel's "Loki" pulled may be one of its earliest reveals: the introduction of Sophia DiMartino's Sylvie, Loki's most dangerous game.

Until Tom Hiddleston's Loki caught up with Sylvie at the close of Episode 2 he assumed he was chasing a male version of himself  –  a variant, to use one of the Time Variance Authority's organizational terms. In explaining the rogue variant's profile the TVA paints the portray of a deadly foe who has outwitted every agent they've thrown at it, and killed more than a few. Truly a formidable Loki by any measure.

Then, at the moment when Loki's cloaked quarry has retaken the upper hand in their confrontation the fugitive pulls back their hood and, voila. He is, in fact, a she. A barely perceptible shift in Hiddleston's comportment tells us this is something his infinitely calculating prince of Asgard didn't account for. While that doesn't change the rules of engagement for Loki in that instant, the challenge of Sylvie adds new dimensions to his mission.

She addresses that with the first line she speaks in her own voice: "This isn't about you."

That's not entirely true. Five of six episodes show "Loki" to be a character development odyssey wrapped in a mystery. The puzzle is the engine, the simple part – presumably in next week's finale we'll find out who or what is behind the TVA, closing the season-long arc.

The identity half of the equation, though, is equally as satisfying to watch, largely due to Sylvie. Her being a woman, and a Loki, is meaningful to this narrative and the larger Marvel Cinematic Universe. The show winks in that direction when Loki meets another band of Lokis in the purgatory where "pruned" variants are banished during "Journey Into Mystery" and asks if any of them have ever met a woman variant of themselves.

"Oh, she is!" Loki proclaims. "That's kind of what's great about her."

Plainly the show's emphasis on the title character's psychological growth and moral realignment are vital to the broader story because this Loki is quite obviously the one we kissed goodbye in "Avengers: Infinity War." That Loki was defined by his rivalry with his brother Thor (Chris Hemsworth), which he set aside whenever they landed upon some shared purpose, whether that be escape from planet Sakaar or defending their home world. At each of those junctures, we should note, the significant transformational forces in Loki's life have been women.

His mother Frigga (Rene Russo) loved him unconditionally and is the only one to whom he was ever true, and her death spurred him to fight by Thor's side. Battling to save Asgard from their sister Hela (Cate Blanchett), the Goddess of Death that Odin banished and hid from his sons, gave Loki another shot at redemption, some of that "glorious purpose" each Loki rants about in the show. Sacrificing his life in the hope of saving his people and brother from Thanos was his ultimate redemption.

Loki's TV show variant never reached those signposts in the MCU timeline, having escaped via an off-ramp directly after trying to take over Earth in 2012. Just as well, since Frigga's death adds to the list of women characters who are murdered to motivate men, and Hela's villainy is representative of the she-demon archetype.

That makes "Loki" a spiritual do-over for Loki and the MCU: an opportunity to add another woman to the pantheon who isn't fragile, or mad, or Thor in female form, i.e. Tessa Thompson's Valkyrie or Lady Sif (Jaimie Alexander).

Let me say this: I have nothing but the utmost affection for Valkyrie and Sif and would ride into battle with either or both! But they are, essentially, female Thor equivalents minus the ability to call down lightning, and carrying swords instead of hammers.

Sylvie plays a part in Loki's game, but she's not the pawn. She represents something else, as we discover in an episode written by Bisha K. Ali, "Lamentis," when Sylvie and Loki become traveling companions. Initially this is a matter of survival, since Loki inadvertently trap the two of them on a doomed planet where they have no choice but to stick together, get to know each other and, crucially, learn to trust others who earn that honor.

What Loki discovers about Sylvie humbles him. She bristles at being called a Loki, first of all, which is why she named herself. She has a singular, self-taught power to enchant people, a magical talent beyond Loki's imagining. Her superior fighting skills, her strategic expertise and supreme logic outstrip his own, especially given his instinct to betray allies in the hope of gaining the upper hand. Loki may be a creature of guile, but Sylvie relies on skill, intelligence and wit. Hence, she's not the Loki who slips away or backstabs. She's the one that stands against the impossible and tries to control it.

It is true that Sylvie is central to Loki's evolution from simple, narcissistic troublemaker to some version of a chaotic neutral white hat  – but not for stereotypically gendered reasons. She doesn't bewitch him with supposed "feminine wiles," although Mobius (Owen Wilson) interprets the bond they forge as a sort of twisted love. Instead, her bravery and ingenuity are what Loki finds to be fearsome, wonderful and, as he tells the other Lokis who grimace at the thought of her, makes her legitimately different.

DiMartino's casting in "Loki" was announced long before the series premiered, but keeping the nature of who or what she would be playing a secret for most of two episodes speaks to the character's importance – even if, Frigga forbid, she doesn't make it into the next adventure. I do hope she does.

Trickster goddesses exist outside of the Marvel Cinematic Universe and across multiple cultures' mythologies but, and here's a real shocker, they are far fewer in number compared to their male counterparts. And it's the gods of mischief, not goddesses that are familiar to most people – Coyote, Anansi, Loki, Bugs Bunny. Yes, the cartoon counts.

Of course, when you open the concept of a trickster to interpretation, many more characters and figures qualify. Conceptually tricksters like Loki are gender-fluid beings. He's transformed into Lady Loki in the comic books but, and this is key, he always returns to his male form.

Sylvie is, if not unique, then at least unexpected in that she wears her version of Loki's suit and horns as a Marvel character and a woman. This also grants her a place of power in a cinematic universe that granted a solo film to one woman Avenger, Captain Marvel, after the major male players on the team received several outings, and is giving another, Black Widow, her due after her death in the original timeline.

Being a girl or a woman who loves comic books means navigating stories about mighty women through whom we might vicariously play out our wildest power fantasies, who tend to be written and drawn by men. Better custodians of these characters imbue them with substance and fascinating interiority, but even then they tend to be stuffed into hypersexualized forms wearing too-tight clothing.

However, like Sam Wilson in "The Falcon and the Winter Soldier," she also exists to question our definition of what makes a hero (including critiquing the uncomfortable outfit she's been stuck with). Being forced to raise herself at the ends of a thousand worlds to hide from the universe's supposed champions taught her a few lessons about who or what is truly just – which she shares with Mobius when he mourns being wrong about being one of "the good guys." She points out that the TVA was annihilating entire worlds and orphaning children like her.

Then he tries to engage in false equivalency, pointing out that she did her own share of annihilating. "You hunted me like a dog," she says coldly, shutting him down.

Hiddleston's Loki comes to realize that the characteristics that have long defined what it means to be him  – a talent for deceit, self-preservation, escape and betrayal – are not virtues. This understanding comes from being with Sylvie, a woman who was neither defined nor coddled like Loki or the rest of his kind. Nobody told Sylvie she shouldn't be anything other than what she is, so she created herself. Eventually she wound up stealing a show with a man's name in the title, making it as much about her as it is about him. That, friends, is a goddess-level trickster move.

New episodes of "Loki" stream Wednesdays on Disney Plus.