Both shows acknowledge that gods exist. But each questions the zealotry with which we follow them 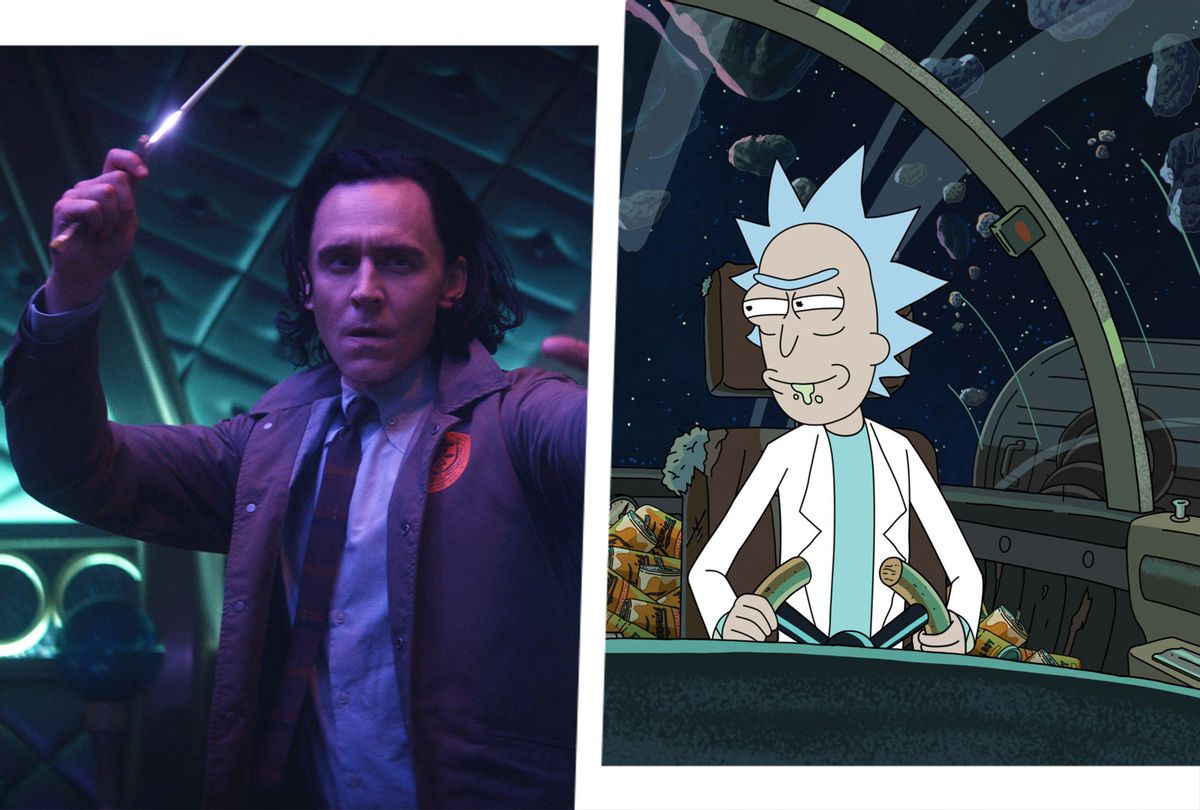 Between Rick Sanchez's god complex, his addiction to using his portal gun to trip through galaxies and dimensions, and his aggressive distaste for religion, "Rick and Morty" will never run out of plot. The arrogant super-genius has dragged his grandson into and out of danger in more ways than one can count, and on dozens of planets.

If Rick didn't demonstrate such naked disdain for gods, he and Tom Hiddleston's Loki may have hit it off.

We're obliged to be specific because "Loki" has established that the Asgaardian trickster introduced in Marvel Cinematic Universe is one of many. In the same way that Rick, Morty and the rest of their family are one version of a unit manifesting across infinite realities, Hiddleston's Loki is a Loki, not a singular force but a type, a common noun. And as he's discovering in this series, he might not even be the best Loki.

That may be, but Loki still has much in common with The Rickest Rick, such as a serious allergy to authority and systems of control; a penchant for creating and exploiting chaos; and a certainty that he's the supreme being in any room, including ones where other versions of himself are present.

Both shows also play with multiverses and timelines, although that's convenient happenstance; adventuring through time, space and realities is a genre staple.  Digging into each one's discrete views on the legitimacy of religion, deities and their prominence in human existence is more interesting, though, in that neither is covertly spiritual or entirely condemnatory of belief. Nor is either agnostic or atheistic, although Rick claims to be, in an early episode. (Series co-creator Dan Harmon describes him as anarchic above all, which tracks.)

Rather the best term I found to describe both "Loki" and "Rick and Morty" is apatheistic, which is more interesting. Both universes acknowledge that gods exist  – obviously, given that "Loki" is named after a Norse one – but from there, each questions how much the average person should care about that.

"Loki," being a Disney property, translates that very subtly by portraying the perils of blind faith and the resultant zealotry that can emerge from it, a theme that fits with the tenor of the current moment in America.

Viewing the nation's schism as a matter of right and left, liberal and conservative, is standard. Beneath all that, it's really a battle between a desire for giving everyone the same level of agency and access to opportunity versus a mania to consolidate that access among the few so they can impose their will and control over the many.

The whole of its workforce dedicates itself to preventing deviations from the supposed one true timeline, overseen by the all-knowing Time-Keepers, by capturing rogue beings called Variants. TVA workers believe they were made for this purpose, and don't remember any life prior to working for the organization.

But four episodes into the six-part series both our Loki and another version, Sylvie (Sophia Di Martino), threaten the organization by revealing to a few employees that their unquestioning loyalty to this seemingly right, true and omnipotent system is based on a massive deceit. And they've only scratched the surface. Whatever and whoever the Time-Keepers are, their obsession with order is outstripped by their aversion to chaos, hence their laser-focus on eliminating Lokis.

The TVA represents any oppressive, dangerous governing structure. But the serenely certain and cultish allegiance to the Time-Keepers, beings few of the worker drones ever meet but everybody accepts as all-knowing, insinuates a devotion to orthodoxy discrete from mere nationalism.

Factor in the organization's incivility towards Loki and his like, and a different subtext reveals itself. The TVA acknowledges that Asgardians like Loki and Thor are gods but demonstrates to us, and them, that they're not necessarily worthy of our kneeling.

Meanwhile, throughout Loki's interactions with the TVA Agent monitoring him, Mobius (Owen Wilson), Loki consistently questions his reverence for the Time-Keepers and his certainty that every being's actions throughout time operates on a determined path. Essentially this is the classic argument between free will and any version of an unseen, mystical plan.

Every MCU-related TV series has some type of conceptual underpinning, executed with varying degrees of success. "WandaVision" manifests grief as a fantastical, insular retreat from a painful and unacceptable reality. "The Falcon and the Winter Soldier" struggled to balance action movie adrenaline with an examination what it means to be Black in America and to dedicate oneself to fighting for justice in a country that affords your people little to none of it in return.

All can be viewed as entertaining extensions of the comic books and superhero movies from whence they came and nothing more. That's what makes "Loki" especially clever in its execution. The show's polychromatic palette, the inherent comedy of Hiddleston's trickster and the writers' ability to maintain an air of mystery – even now, with two episodes left to go, we're not entirely sure of what's going on this world – combine to fulfill everything we want in an action fantasy.

But the current of philosophical skepticism flowing beneath the main narrative indirectly evokes our culture-wide trend toward abandoning religion without entirely abandoning God. This is especially true of Christians: A Gallup poll released in March showed that among Americans polled in 2020, only 47% belonged to a house of worship. This marks the first time since Gallup began polling on this question (which was in 1937, when that number stood at 73%) that the number has fallen below 50%.

This also correlates with a 2019 Pew Research Center poll in which 65% of American adults described themselves as Christian, representing a 12% drop over the past decade, while the number of those identifying as atheist, agnostic or "nothing in particular," rose over the same period of time from 17% to 26%. Out of that 26% only 9% consider themselves atheist or agnostic. The atheists have the smaller numbers at around 4%.

Various reasons can be attributed to this shift – much of it has to do with the regressive social and cultural views espoused in conservative Christian communities.  We shouldn't downplay or discount younger generations' displeasure in the insistent structure and rule-abiding religion demands. Perhaps it's not so much that fewer people believe in God, but rather that more of us are questioning the validity and moral authority of the Christian church's hierarchy.

Again, "Loki" never takes direct aim at any specific church or dogma. Disney and Marvel are in the franchise business, which makes continuing this popular comic book character's story arc the show's one true purpose.

"Rick and Morty," however, consistently takes potshots at Christianity and the inanity of believing in the Almighty – any version of the Almighty. To them, every god is some version of The Man – always there, eager to impose his might but generally disinterested. And if gods don't care about us, why should Rick and Morty care about them?

Season 5's second episode "Mortyplicity" illuminates this insouciance with a bright beacon by opening with, "Christian God is real. He's been asleep for thousands of years. We're gonna sneak up there and kill him." Rick (voiced by series co-creator Justin Roiland) casually explains this as he's chowing down breakfast.

Any horrified Christians who may still be reading this (God bless you!) may be relieved to know that doesn't happen. Before Rick, Morty and the rest of the Smith family can rise from the table, squid-like assassins burst into the room and murder them all.

It turns out they're a decoy family, clones the main Rick created and stashed around the country to throw off dangerous enemies. This spins out of control, as situations are wont to do on this show, because any clone of Rick would cook up a similar strategy. Meaning, the entire episode consists of Rick, Morty, Beth, Jerry and Summer clones icing each other in ever more creative ways while skipping down a genetic tree that grows ever more gnarled, until we encounter versions that aren't even flesh and bone but sentient wooden poppets.

One of those ends up being the last one standing: Jerry. But his first act of individual freedom becomes his last, and stretches into eternity. As he's floating down he's nabbed by a family of beavers who hollow him out and make a nest of his torso. Eventually he's submerged in their river only to awaken in a post-apocalyptic, post-human wasteland populated, by nonspecific bipedal . . . cowboys.

They burn what's left of Jerry, which is his head.  But he revives one more time to find himself atop of a crucifix on which a Christ-like non-human being is nailed.

"Christianity again?" Jerry whines. "And after cowboys? You took it all the way back around?"

Yes. They took it all the way back around.

The fascinating part about "Rick and Morty" is that despite Rick's open ridicule of religion there's some truly thoughtful episodic analysis about it on Christian-themed blogs. That's probably because the show treats all so-called higher powers equally. Throughout series Rick has claimed to be a god at various points and visited societies that worship him, which he created for that very purpose. He's knocked off a Zeus. He's also impregnated a planet.

Rick is fallible too. In every way possible the show's writers remind us that although Rick's has absolute faith in his intellect, he's merely a mortal who changed the universe by inventing something grand. That makes him extraordinary, not unique and nowhere near omniscient, let alone holy.

Few would liken "Rick and Morty" to "The Simpsons" in terms of affectionate religiosity. But Rick does successfully petition the intervention of Jesus Christ in the episode "Never Ricking Morty" by invoking the Evangelical Christian version the Sinner's Prayer.

The entire episode is a metaphorical parody of storytelling structures and tropes, and Rick explains the only way to combat his enemy, the Story Lord, is to call up on The Greatest Story Ever Told. He and Morty pray, and Jesus descends from the Heavens. It's a lazy resolution to their conundrum, and Rick knows that. "Nobody ever wanted to see that s**t," he growls once they're beyond harm.

"I dunno, some people actually like that stuff. Seems kinda cynical. I just don't like taking cheap shots, you know?" Morty says.

"Cheap shots?" Rick replies. "Morty, we were literally saved by Jesus Christ. Tell me in any way how that's offensive."

He's not wrong. Neither is Morty. This is why the apatheistic approach works in a show like this, appealing to believers and non-believers at the same time by not entirely siding with one view or the other. Like the TVA in "Loki," "Rick and Morty" treats godly matters and incertitude as equal virtues, and makes pondering our relationship with worship as it relates to religions, systems or individuals, completely entertaining.

Neither show qualifies as the greatest story ever told, but together and separately, they are among the best ones flying in this TV universe.

"Rick and Morty" airs Sundays at 11 p.m. on Adult Swim. New episodes of "Loki" drop every Wednesday on Disney+.