Despite being a huge jerk, Rick is an embraceable hero because he has an itch for dismantling oppressive systems 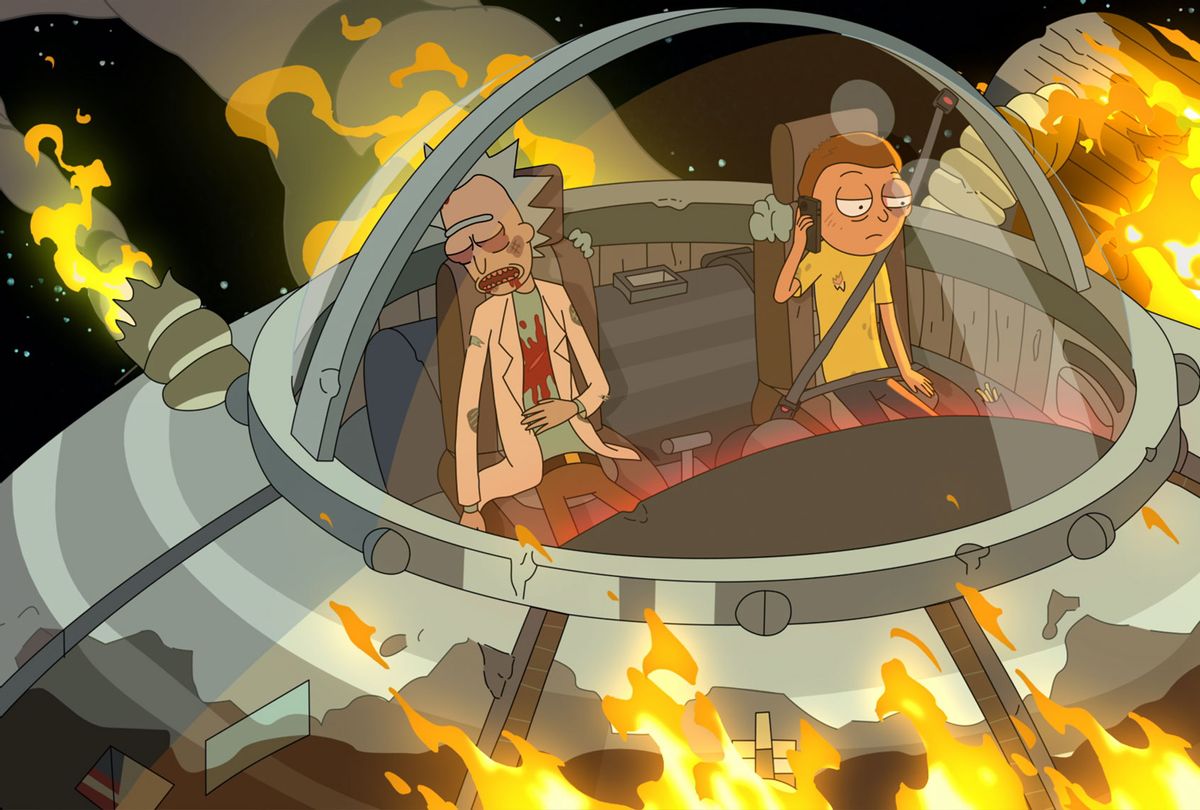 Contrary to the earliest and quite naïve assessments of the pandemic, COVID-19 is the furthest thing possible from an equalizer. But it is humbling the hell out of many, and why should the titular genius of "Rick and Morty" be exempt from that?

This refers to a feeling, by the way, not anything concrete in the long-awaited the fifth season premiere "Mort Dinner Rick Andre," the first new episode to air since the fourth season finale in May 2020.

Series co-creators Dan Harmon and Justin Roiland, the latter of whom voices both Rick and Morty, have been working on this season since 2019, and back then only scientists like Rick were aware of what coronaviruses are.

Plus, "Rick and Morty" has always been a show that comments on the harsh reality of existence while rarely making direct reference to real-world events save for, say, the odd rise of a totalitarian regime from a democratic election.

This is a long way of saying that of course there were no face masks in the premiere written by Jeff Loveness (his last one before writing the script for the upcoming MCU feature "Ant-Man and the Wasp: Quantumania") and as far as we know the introduction of Rick's Loki-esque pansexual nemesis Mr. Nimbus (voiced by Harmon) was always going to come off it does.

Nimbus doesn't seem like much of a threat when we meet him, surfacing on the ocean to confront Rick on a giant scallop shell a la Sandro Botticelli's "The Birth of Venus." But peek at the clutch of phalluses blooming around his feet. This guy rhymes-with-ducks and he wants everybody to know it.

His reveal is triggered when Morty crash lands his grandfather's spacecraft on water in a last-ditch effort to save both their lives. That never seemed to be a problem before but apparently it is, since Rick previously made an agreement with Nimbus, a nod at Marvel's Sub-Mariner, to never touch his ocean. And Rick isn't merely irritated at Morty for summoning Nimbus. He looks genuinely worried.

Although some episodes convey their roles in the show's storyline quite plainly, many "Rick and Morty" installments contain whatever level of alternate meaning the viewer assigns to it. Nimbus could be a one-off, or perhaps he'll hound Morty and his grandpa forever.

Or, given that we've shared some global version of a crash landing that millions didn't survive, maybe Nimbus is supposed to translate as a representative of a foe we haven't entirely figured out. In any event, Rick's annoyance at being forced to cater to the whims of an adversary who is at least his equal if not more than he can handle places him in similar figurative territory to the place where we've been locked down for 15 months.

If we're watching Rick in action he's probably drunk or high, which is fine because he's fought to the end of all our stories and won. Meanwhile Morty often stumbles his way to success. That Morty landed the broken craft at all is because when he thinks death is inevitable he calls his unrequired crush Jessica (Kari Wahlgren) and is so shocked at her invitation to come over to watch a movie that he pulls off the save.

But a nemesis is a fresh ordeal for Rick. That Rick has one at all is surprising, given how many episodes of this show are devoted to showing him bragging about how far beneath him every being in every multiverse is.

Certainly he tolerates life with his dim bulb of a son-in-law Jerry (Chris Parnell) to appease his daughter Beth (Sarah Chalke) and remain in his 17-year-old granddaughter Summer's (Spencer Grammer) good graces, but he can live without them, and has.

And yet, there's a special twinge of dark humor in making one of the many tentacles of Nimbus' power that he "controls the police." His arrival on a river of saltwater and eels is so off-putting to Jerry that he calls the cops, who show up and immediately hop to attention when Nimbus tells them to fight, then rhymes-with-duck, then flee.

Thus he proves what Rick said in the first place: "Mr. Nimbus is an ice-cold dick killer, Morty."

What else can he do but placate him for a chance at negotiating a new level of détente? He does this over a table laden with food and after making Morty into his wine steward, forcing him to age some basic swill into a centuries-old vintage by placing a case or three inside a dimension where time moves differently.

Hence the episode's complex secondary plot kicks in, since Morty encounters a lovely man named Hoovy (Jim Gaffigan) who kicks off a world-changing vendetta between his people and Morty. He steps through the portal to help Morty carry a case, and when he heads back a lifetime has passed; his pregnant wife is gone and the son he left in the womb has grown up old, bitter and homicidal.

Since Nimbus is a lush, Morty has to return to the dimension again and again, and every time the world on the other side of the door is more hostile, organized and evolves from a place that resembles "Excalibur" to something out of "The Matrix." Eventually the other side claims Jessica, trapping her in a lucid stasis for lifetimes. When she returns to our existence she is changed.

"Time without purpose is a prison," she says.  "I have glimpsed into the mind of eternity, perhaps the mind of God, and found nothing but silence." Then she pauses before sending Morty to a zone where no teen boy wants to be exiled: "I think we should just be friends."

The simultaneous fondness for the recurring motifs of speculative fiction and its irreverent mocking of twists and tools that have been done to death are central to this show's duende. And that's also a major reason we love Rick, because he's an old guy who has seen it all, done it all and screwed more than you can imagine.

Despite being a huge jerk, Rick is an embraceable hero because he has an itch for dismantling oppressive systems. His arrogance is an outgrowth of his ability to impose his will on chaotic forces and topple structures constructed on trust and belief – like, say, the economy.

But this only applies to all dimensions, planets and galaxies; he forgets about the threat lurking under the waves that is extremely sexually fluid, guzzles ancient vintages of fine wine, and controls the cops. Next thing you know all of our dry land is on the line.

And if that sounds like a bizarre, unnecessary development in the face of such lethal uncertainty, welcome to "Rick and Morty" in 2021. The hero has met his match and doesn't quite know what to do. He's vulnerable, and so are we. Of course, he and his grandson aren't real, but the choice they make in light of this week's premiere is similar to our own – they're pressing on, somewhat more blindly and possible with a little more care. Like us they've learned that no conclusions are forgone and no ending is predictable anymore, not even for the Rickest Rick.

New episodes of "Rick and Morty" air Sundays at 11 p.m. on Adult Swim. Previous seasons are available to stream on HBO Max. The Season 5 premiere is available online for free on YouTube, or just watch below: