Whether you're a newcomer or need a refresher, here are the must-watch episodes for the Adult Swim series' return 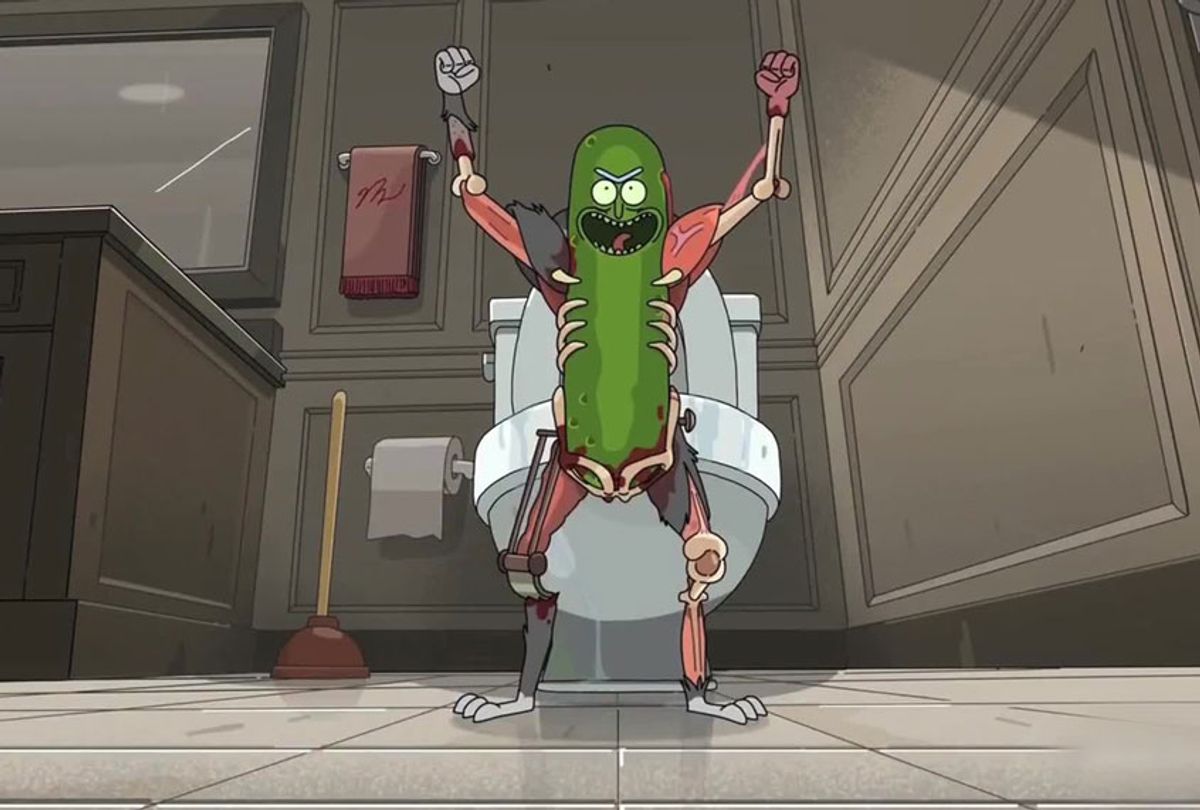 Selecting the greatest or most necessary “Rick and Morty” episodes to watch prior to its long-awaited fourth season debut on Sunday, Nov. 10, is a Jerry’s errand. A fun one, certainly, but still.

This is because there are as many ways to watch the dimension-hopping adventures of alpha-genius Rick Sanchez (voiced by series co-creator Justin Roiland) and his easygoing, anxiety-prone grandson Morty Smith (also Roiland) as there are people on this planet.

The show’s appeal transcends just about every “ism” that conspires to separate us because it revolves around a simple premise: existence itself is random and pointless, and the universe – every one of them – is a spinning mess of chaos.

But Rick, the inventor of a gun that opens inter-dimensional portals at the pull of a trigger, believes he’s mastered navigating that chaos and almost always proves that he’s right. He’s also an unrepentant alcoholic who belches and drools uncontrollably, masking his self-loathing with swaggering confidence and using his grandson Morty equally as a validating sidekick and a human shield or occasional mule for transporting illicit substances.

Even though long hiatuses between seasons are the norm for this series, the two-year wait between Season 3 and 4 has been particularly agonizing; never before has the show’s brand of nihilism felt more comforting. And it has also attracted more viewers to “Rick and Morty” thanks to its presence Hulu, where all 31 episodes are streaming.

“Rick and Morty” is one of the funniest, brainiest, and most philosophically dense comedies on TV, let alone on Adult Swim. You can drop right in on the new season if you wanted to, but where’s the joy in that? Breezing through the entire series prior to the fourth season premiere can be done over the course of a few nights.

Absolute newcomers might also follow the advice of series creators Dan Harmon and Roiland and stick to watching the 10-episode third season, which they say is a sufficient prerequisite to appreciating the more serialized elements of Season 4.

That said, our time on this weird little rock we call home is finite, and even though no “Rick and Morty” episode is longer than 25 minutes, maybe you’re looking for the basic gist of what it’s about by way of a skim. In that spirit, we offer these nine episodes as a sufficient entry point to “Rick and Morty” and the complex universe of the Smith family.

Very few series nail the pilot, and although “Rick and Morty” is among the few TV shows that have no true clunkers within its 31 episodes, this is not one of its best. But it does what the first episode of any show is supposed to do, which is introduce the title characters along with Rick’s daughter Beth (Sarah Chalke), his 17-year-old granddaughter Summer (Spencer Grammer), and his dolt of a son-in-law Jerry (Chris Parnell).

That week’s adventure involves Morty receiving a temporary intelligence boost due to some seeds his grandpa forces him to smuggle inside of his butt. Hilarity and gunplay ensue, with the end result being that Morty gets permission to continue his wacky outings with grandpa. As long as he’s useful.

“Rick and Morty” is a clue factory, constantly dropping hints that contain deeper meaning and significance to the overall arc even in episodes that seem to be one-and-done enterprises.

The Meeseeks plot grants a vital look into how Beth, Jerry, and Summer feel about themselves in relationship to each other and to Rick – a crucial aspect of a series that dives into the muck of human emotion. The idea is that Rick presents the family members that he and Morty leave behind with a Meeseeks Box, a tool that generates a blue being at the touch of the button.

This humanoid’s entire reason to exist is to complete one task chosen by its summoner. Rick warns Beth, Jerry, and Summer to only give the Meeseeks simple tasks. The joke is that Beth and Summer immediately make conceptual requests. Beth wants to feel like a more complete woman. Summer wants to be more popular among her peers. Jerry, meanwhile, asks Mr. Meeseeks to help him take two strokes off his golf game. Guess which request ends in a Meeseeks bloodbath?

Regardless of that turn of events, the Meeseeks are returning in the fourth season, so watching this episode may place events to come into context.

Mad science is a fickle mistress, even for those of the highest intelligence. This is proven in this episode, where Rick creates a love potion for Morty to get the girl he has a crush on to fall in love with him. What Rick only partially accounts for is the unpredictable effects of viruses.

Anyway, this is the episode where Rick explains the existence of infinite realities and infinite versions of themselves, which is fortunate since Rick’s miscalculation transforms the Earth into what the series dubs a Cronenberg world.

Rick is not your standard cartoon protagonist for many reasons, one of the topmost being the mystery concerning his true feelings about his 14-year-old grandson. Even though Rick treats everything and everyone else in the existences through which he travels with irritated forbearance at best, he prioritizes Morty for reasons other than self-preservation.

“Rick and Morty” has only begun to scratch the surface of what makes “Earth Rick C-137” – the Rick we’re following – the Rickest Rick. This is the first episode that explains some of this, but it also introduces us to The Citadel of Ricks – now simply known as The Citadel – where Ricks and Mortys from across realities form a society that watches all the Ricks and Mortys in the universes.

In this episode, Rick explains why he forces Morty to join him on wild adventures. Of course, this isn’t the whole story. But this one is important to watch because it also shows us, for the first time, that not all Mortys are intellectually inferior, docile or benevolent.

By this point in the series, the viewer is aware of how Rick feels about Jerry: he tolerates the charming dullard to keep his daughter happy. But we may be less aware about how Rick feels about the being alive, and what Beth sees in Jerry. This episode answers both of these questions by sending Beth and Jerry to an off-planet marriage counseling center that makes their true perceptions of the other person manifest as horrendous creatures: Jerry’s Beth is a malicious, deadly bug queen, and Beth’s Jerry is a submissive, useless worm. Unfortunately for the marriage center, their co-dependency makes them dangerously unstoppable.

While that destruction is occurring, Rick transfers his consciousness into a teenage version of himself that he’s cloned so he can attend school with his grandchildren. And he quickly becomes the most popular kid in school, even though he regularly blurts out suicidal thoughts that his peers don’t take seriously.

“Rick and Morty” superfans may be wondering why this list doesn’t include “Get Schwifty,” the fifth episode of Season 2 that imagines a scenario in which mindless, all-powerful aliens force the Earth into an intergalactic “American Idol”-style competition where the losers are immediately vaporized.

The answer to that is, that a) now it’s mentioned on the list. And b) the “Purge” episode explores a few of Morty’s greatest foibles by forcing the duo to play through the dangers and benefits of veiled altruism while serving up a commentary on unchecked greed, the perils of ignorance, and the arrogance of the savior’s complex. As a bonus, since we’re talking about music, it also makes a terrific case for Tony! Toni! Tone!’s 1990 R&B hit “Feels Good” being an unparalleled rage anthem.

If you’re not going to watch the entire third season – the series’ best so far – at the very least treat yourself to this one half-hour homage to prison break films as it provides an answer to the second season’s cliffhanger finale.

Only in this great escape, Rick single-handedly takes on the greatest forces in the universe that are hunting him, after which he establishes absolute dominance over his family by forcing the family to choose between him and his son-in-law.

Meanwhile, in the real world, this is the episode that inspired insane fans to pressure McDonalds into resurrecting the Szechwan sauce it offered as a movie tie-in to the 1998 Disney film Mulan.

The episode that earned “Rick and Morty” a Primetime Emmy Award for Outstanding Animated Program is also an unflinching look at the stubborn lengths to which people will go to avoid admitting they might have mental health issues. Rick being Rick, he transforms himself into a pickle to get out of joining the rest of the family for a counseling session (led by a therapist voiced by Susan Sarandon).

The harsh bottom line as the family discovers, is that Rick would rather focus on saving the world than do something about the dysfunction splintering his family, the latter being too difficult for his expansive intellect to solve.

Since Harmon and Roiland are taking the series in a more serialized direction, this is an episode you simply can’t ignore. The title is a misdirect; although it implies Rick and Morty are heading to Atlantis, we’re actually taken back to the Citadel, where society has organized itself along the lines of, well, America circa 2016. An assortment of alternate Ricks and Mortys take us through four main vignettes, two of which resemble famous films and one being a twisted narrative factory tour of the place that makes Simple Rick’s wafers, a cookie flavored by the essence of a Simple Rick’s happiest memories.

But the A-plot follows the campaign to choose a new president of the Citadel in which everyone assumes a Rick will win but, in a surprising turn, a dark horse candidate Morty ends up sailing to victory by dint of sheer charisma and by saying exactly what the Citadel’s voters want to hear. Only in the bleak final moments is it revealed that this Morty is actually an authoritarian we have previously met in the first season.

In the post-credits scene, Earth Morty wonders aloud what’s going on in the Citadel and our Rick shrugs it off, telling his grandson that whatever is happening there probably won’t have any effect on their lives . . . famous last words that burn far more painfully now than they did in 2017.