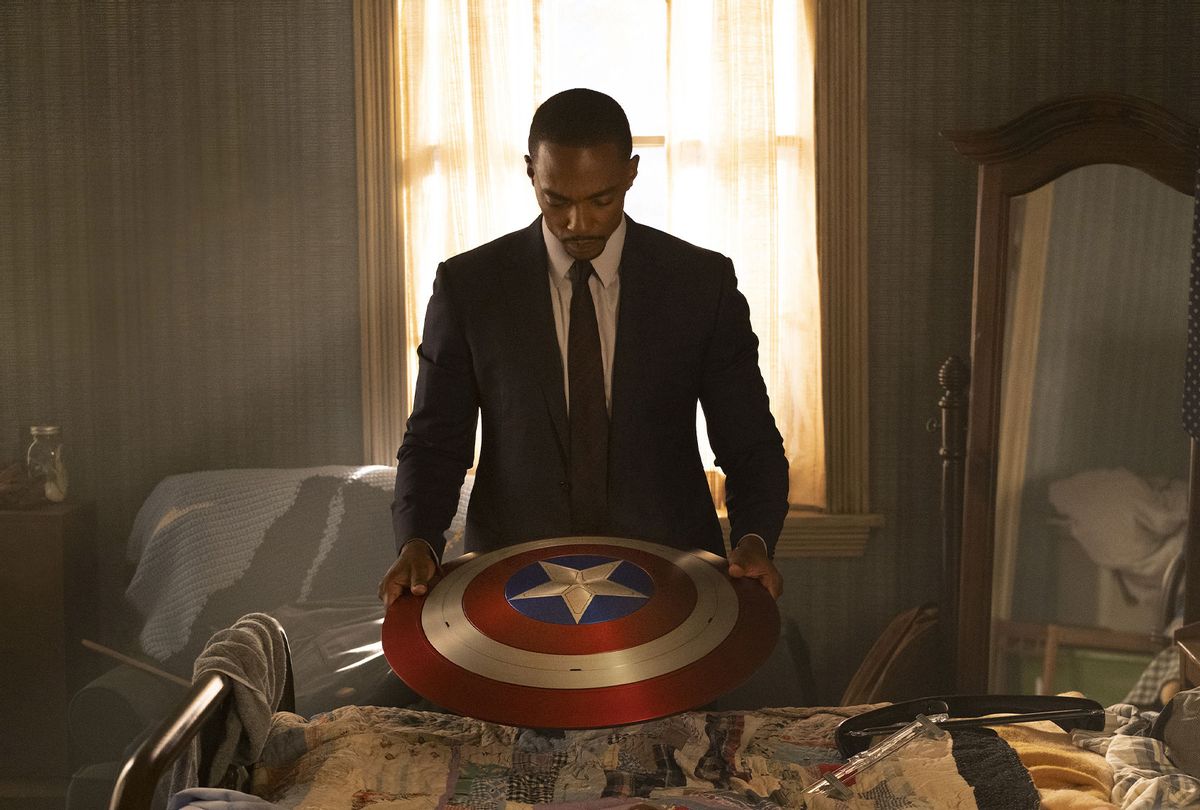 Sometimes a rickety fishing vessel on the Louisiana bayou is nothing more than it seems. Unless, that is, it's a vessel moored in a series about pieces of metal and what they symbolize. In that context it, too, becomes a hopeful metaphor to helps the bitter pill of a larger moral go down more smoothly.

"The Falcon and the Winter Soldier" was sold to us as straightforward action series capitalizing on the chemistry between Anthony Mackie's Sam Wilson and Sebastian Stan's James "Bucky" Barnes, and sure, that part's been great. Said proposition was enough to lure us in but is an insufficient foundation upon which to build an origin story for a Black American superhero.

Doing that requires digging up the rocky soil of a nation and analyzing what makes it good and fertile, and it's equally as vital to reckon with all the ways that it is tainted. Fulfilling that mission here means digging into what Captain America and all superpowered protagonists stand for, and how aspirational symbols can become dangerous idols.

Supremacy as a concept makes people uncomfortable, mainly because it is comes up in brutal discussions about what's wrong with America. Many times during the course of this supposed reckoning we're in, wise people have pointed out the many ways this country is built on white supremacy — and a plurality of folks who swear they mean well never want to hear that.

But that is an accurate assessment of America's social and political architecture. Look at Minneapolis, where an unarmed biracial Black man, Daunte Wright, was murdered by police, at the same time the trial of Derek Chauvin, the cop who murdered George Floyd, is happening.

During the same week and in the same state, a white man named Luke Alvin Oeltjenbruns assaulted a cop with a hammer and dragged him with his truck at speeds said to have reached 40 miles per hour. He was arrested and booked and is very much alive. Supremacist systems are built to protect some people and destroy others.

This is a shade too heavy for the Marvel Cinematic Universe to approach straight on, so while an early episode of "The Falcon and the Winter Solider" includes a scene where Sam is harassed by cops, his fame as The Falcon eventually saves him.

The Mighty Avengers always prevail, and Steve Rogers, first of their name, represents the best of the American myth. As my colleague Amanda Marcotte pointed out in a piece about "Captain America: Civil War," the MCU and Chris Evans, the actor who plays him, draw Steve as "a New Deal Democrat standing up consistently for liberal values," "anti-racist, anti-sexist, valuing transparency in government and his belief that we the people should hold power."

Such a terrible thing to say out loud about such a nice man, right?  We also know things would have gone very differently for an asthmatic Black kid with a hero's heart who lied to the military several times in a quest to fight in World War II.

As if predicting someone would argue this point, "The Falcon and the Winter Soldier" introduces Carl Lumbly's Isaiah Bradley, a Black super-soldier who emerged after Steve disappeared and was erased from history.  The government made him too, but instead of being supported, promoted and deified, Isaiah was imprisoned and treated like a lab rat for 30 years.

At first Sam can't conceive of Isaiah's torture being wrapped up in Captain America's legacy, so he pushes that story to the back of his mind as he and Bucky charge into in the season's main mission. They're enlisted to stop a group of super-soldier terrorists — or revolutionaries, depending whether you're a government official or a refugee — devoted to defeating the global (supremacist) council attempting to forcibly repatriate poor people displaced by The Blip to their countries of origin.

Sam and Bucky wrestle with the righteousness of that mission while clashing with the "new" Captain America, John Walker (Wyatt Russell). 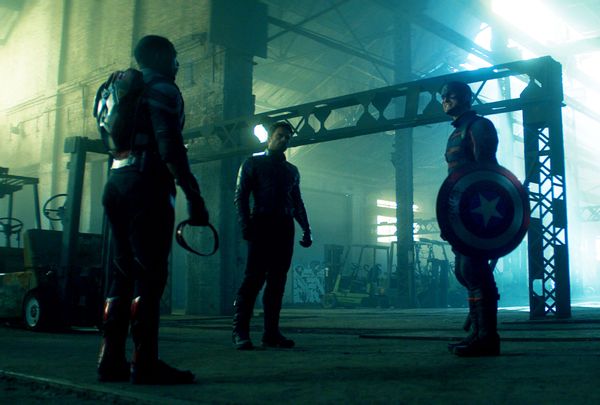 "The Falcon and the Winter Soldier" (Disney+/Marvel Studios)

Walker is a MAGA-era superman who refuses to accept the world isn't his, and going by the military complex's definition of who qualifies to be Captain America, Walker is flawless. He's the recipient of multiple Medals of Honor and an Afghanistan War hero, physically capable, extremely arrogant. Saddling him with a Black sidekick named Battlestar whose main job is to prop up his ego, is quite the chef's kiss on the whole character.

During his media tour Walker assures America he has the guts required for the job, and that's when know he's exactly the wrong man to carry the shield. Steve led with his heart, which is what fuels Bucky's drive to preserve his legacy by stealing the shield and, conversely, informs Sam's hesitance to take it up.

Walker's gut reactions get his partner killed, get himself gorgeously humiliated by the Dora Milaje and – once he downs his own vial of super-soldier serum – bring out so much of the worst in him that he murders an innocent man with Steve Rogers' noble emblem.

Eventually and through great effort, Sam and Bucky reclaim Captain America's shield from Walker before the government strips him of duty and brands him with a dishonorable discharge. Nevertheless, the system would not work if Walker wasn't offered a chance to fail upward. In his lowest moment he's approached by the MCU's version of Rebekah Mercer, Contessa Valentina Allegra de Fontaine (Julia Louis-Dreyfus in a fabulous surprise cameo), who reassures him they have a future together. (Hail Hydra.)

Still, Falcon and Bucky's victory does not solidify Sam's right to carry that complicated hunk of metal. Completely defeating Walker requires Sam to dismantle the white supremacist ideals he's internalized. (Witnessing a group of elite Wakandan warriors shred Walker to bits probably helps with that; it was certainly therapeutic to watch.)

Once again the writers use Zemo to explain what this means. "You must have really looked up to Steve," Zemo tells Sam in the third episode. "But I realized something when I met him. The danger with people like him, America's super-soldiers, is that we put them on pedestals. They become symbols, icons, and then we start to forget about their flaws. From there, cities fly. Innocent people die. Movements are formed. Wars are fought."

The Zemo turns to Bucky. "You remember that, right? As a young soldier sent to Germany to stop a mad icon?"

Let's contemplate, for a moment, how canny it is for these truths to come from this evil man. Zemo is awful. A killer. Also, he's not wrong. (Furthermore, this series isn't the first TV show about superheroes to make these points .)

But these observations are less for Sam to accept than for the audience to digest, because on some level the "Falcon and Winter Soldier" writers understand that those words hit differently coming from the mastermind who nearly broke The Avengers.

When Isaiah echoes Zemo's point — "Blond hair. Blue eyes. Stars and stripes. The entire world's been chasing that Great White Hope since he first got dosed with that serum!" — ask yourself whether the common dude on the street would take him as seriously as they would a member of Europe's aristocracy. Supremacy. It's really something.

All of these factors culminate in the interior transformation Sam undergoes in the fifth episode, "Truth," once he sits down with Isaiah.

In previous episodes Sam acknowledges the ways America has failed him. Nevertheless, and in his own way, he still believes in it . . . more than himself.

Sam originally refused to vie for the shield because he said it didn't feel right in his hands and thought he was doing the right thing. More to the point, he also knew that America wouldn't easily accept a Black Captain America.

But it's only when he brings the shield to Isaiah that his final forging begins. "I used to be like you," Isaiah tells him, "until I opened my eyes."

Then Isaiah tells his story of being unwittingly injected with an unstable version of the serum and being told it was a tetanus vaccine, of watching his brothers die, of being disappeared and transformed into a government test subject. Despite all of this, Sam insists the world is different.

"That's why you're here," Isaiah says. "You want to believe jail is my fault, because you got that white man's shield . . .They will never let a Black man be Captain America. And even if they did, no self-respecting Black man would ever want to be."

With that, Sam returns to home in Louisiana, his sister Sarah and his nephews and resumes his other mission to save his family business.

That returns us to that boat and another major refrain this season, which is the reminder that the world is broken, upside down, and that it needs a new Captain. Rhodes says it. Bucky says it too, several times. The local bank denying Sam and Sarah a loan despite knowing Sam is a national hero who saved the world, a lot, should have been enough of a clue.

When they try to sell the boat, the only man who would have bought it informs them that it has deteriorated beyond repair. What else does that remind you of? A broken world, maybe, that needs fixing.

A lazier tale may have resolved this by having Stark Industries dump an angel loan upon the family from nowhere. Not this symbol-heavy yarn. Here the community gathers its strength to save the Wilson family from ruin, lending Sam and Sarah the parts and labor they need to get their wreck seaworthy again. Bucky shows up with a mystery box from Wakanda and lends his super-powered elbow grease to save the day. The trust that real power rested with ordinary people is very much a Steve Rogers truth and plays out before our eyes. 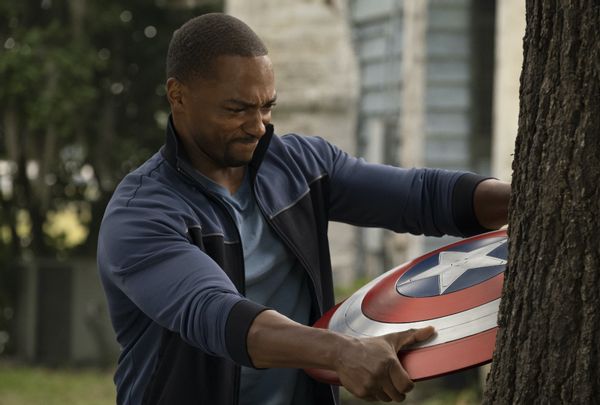 Anthony Mackie in "The Falcon and the Winter Soldier" (Disney+/Marvel)

This being a comic book story, much of Sam's resolve concretizes by way of a few heart to heart conversations with Sarah and Bucky, glimpses of his nephews playing with the shield, and the all-important workout montage. Push-ups! Mad marathons! Shield frisbee, with acrobatics! Sam punishes his form into something bigger, better and faster without scientific intervention. Working five times as hard to fight for a job you've already proven that you deserve is pretty much the Black American experience in a nutshell, so I suppose that has to be part of Sam's inevitable audition.

If any doubt still lingers about whether he's ready, whatever Wakanda gifted him should speak to that. The vibranium in Captain America's shield comes from that land, and there's a poetic rectitude in the notion of someone with African ancestry wiedlng it.

And it is amazing to think that "The Falcon and the Winter Soldier" would go these places in order for Sam to sell himself, and the audience, on believing in such a miracle. Only a self-respecting Black man has the fortitude to pit himself against the supremacist forces aligned against him and refuse to bow, resolving to win and take up what is rightfully his.

Let's see what America has to say about that.

"The Falcon and the Winter Soldier" is currently streaming on Disney +. The finale debuts Friday, April 23.