In the MCU's latest series on Disney+, Sam Wilson & Bucky Barnes return for fist fights and PTSD (but no paycheck) 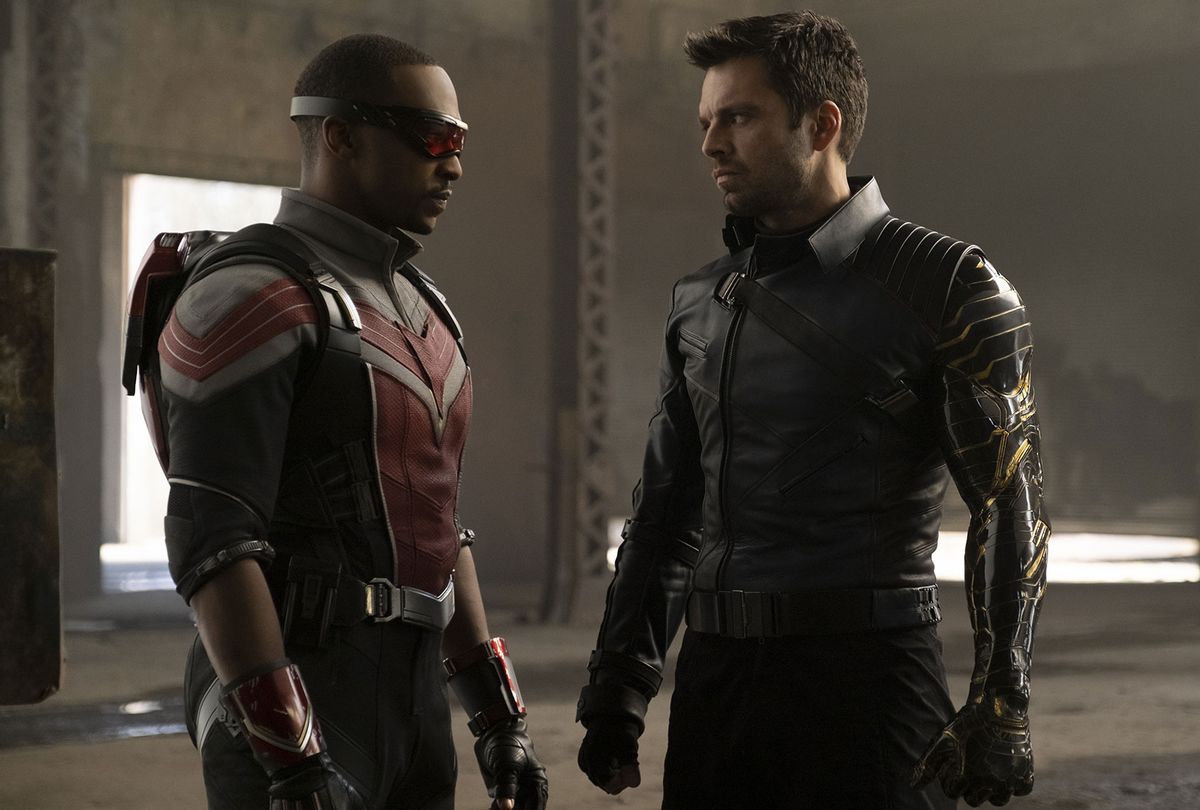 Were you one of the many folks who left "WandaVision" early because there weren't enough fight scenes and explosions? Did you stick around until the end only to be nonplussed by the finale's witch-on-witch violence, which mostly boiled down to two excellent actors flinging colorful energy balls at each other?

Straightaway "The Falcon and the Winter Soldier" remedies that by meeting up with Sam Wilson, aka The Falcon (Anthony Mackie), mid-secret mission. A full 10-minute action sequence opens the episode, and considering that it's only slightly longer than 40 minutes if you don't count the marathon end credits that come standard with any Marvel Cinematic Universe joint, that's a full 25% of the premiere dedicated to a hero shooting his way to a solution.

All of it happens before we check in on Bucky Barnes, formerly known as international assassin The Winter Soldier (Sebastian Stan), so if you're guessing the action doesn't stop with the man in the metal wings, you are right!

Marvel introduced the television extension of its Cinematic Universe with a creative love letter to TV with a tribute to grieving written on the backside of the paper, and while a lot of people loved "WandaVision," many folks didn't. The idea of an MCU title focusing on a love story as opposed to setting up a weekly punch-a-thon with an enemy too mighty for mere mortal fighting forces was a bit off brand.

But the comic book movie company knows which side its bread is buttered on. Hence this slamming action series that, you know, really feels like a six-hour movie. You may read that as a TV critic's sarcasm – there are few descriptors that folks like me detest more than a producer describing their artsy drag of a show as "really, it's more of a 10-hour movie."

In this case, the boot actually fits, and better yet, there are thrusters in its heels.

"The Falcon and the Winter Soldier" picks up after the Blip, which returned both Sam and Bucky to our existence in time to help out Captain America (Chris Evans) defeat Thanos in the events of "Avengers: Endgame" but robbed the trio of much togetherness after that. A time travel errand returned Steve Rogers to them as a very old man ready to be done with his duty. His final act (on camera, at least) is to bequeath his shield to Sam with Bucky looking on, nodding his approval.

"It isn't," Steve insists, after which Sam thanks him and tells him he'll do his best. "That's why it's yours," Steve replies with satisfaction.

Transferring that title isn't so simple; as it turns out, Sam isn't ready to take on the Captain America mantle. Bucky, meanwhile, is having problems reconciling with his past and re-entering life as a civilian. In the way of all soldiers who have seen combat, to say nothing of one who was brainwashed and forced to kill people in cold blood for the better part of a century, he's contending with severe PTSD and isolating himself from the world.

Duty isn't done with either of them. Sam encounters a new terrorist force rising in Europe and the Middle East, but there may be a larger domestic problem looming. Captain America's shield is one of the most powerful items in any world power's arsenal, and this is America. What Sam won't claim, someone else will – and that's really where this story kicks into gear.

"The Falcon and the Winter Soldier" sets us up to expect a weekly action movie, and it's certainly possible that every episode will feature some sort of mind-boggling sequence. (It worked for "The Mandalorian" in its sophomore run.) But series creator Malcolm Spellman, who also wrote the fine premiere, hints at clawing into spaces that this franchise doesn't tend to go in its movies, such as how we define American greatness and what we believe our heroes should look like.

The MCU operates far outside the range of reality, of course, but some truths transcend timelines and multiverses, one being that at least half of Americans might take issue with a non-white person claiming the title Rogers originated. When a government official declares that the nation has a "need for symbols, and better, people worthy to stand behind them," he doesn't have Sam in mind for that job regardless of the fact that he's proven himself many times over.

Granted, it is Sam's decision to surrender the shield, for which he receives the thanks of a grateful nation and little else. Critics were only given one episode of "The Falcon and the Winter Soldier" to preview, but plainly this kernel is what thickens the plot.

If nothing else this series makes the audience realize that being an Avenger doesn't come with its own paycheck; Sam accepts government contracts to make ends meet. Bucky's living situation is comparably bleak and spartan, although he does seem to do a bit of work with local law enforcement as part of an obligation to make amends.

The action sequences are theatre-screen incredible and rely on superhuman feats as always, but the most formidable struggles these men face are entirely mundane and specific to each of them: Sam returns home to Delacroix, Louisiana to helps his financially struggling sister, Sarah, only to discover that saving the known universe holds absolutely no weight with financial institutions. Bucky is barely hanging on and doesn't believe he's entitled to anything better in life but misery.

They're in separate places when the story starts, and separately Mackie and Stan are natural stars, commanding each scene they're in. And while the movies established that the actors have chemistry it'll be interesting to watch that expand and mature over the course of the series.

The dialogue doesn't expressly state this, but there is an unspoken common theme of deserving. Sam is supposed to become Captain America but he can't see it yet, and there's a special sting in watching someone earn a title that was theirs to begin with.

It's odd to think that at some point soon these two haunted men will team up on a vaguely humorous journey, which was how Spellman originally envisioned this concept. Except, that is, when you come back to the essential spirit of the Captain America story.

Captain America is a fan favorite because he equates excellence not with status or intelligence but simple goodness. Before he became Captain America Steve Rogers was short, scrawny and asthmatic and accustomed to being beaten down by men who were bigger and meaner. He earns the right to have powers bestowed upon him by replying to the question of whether he wants to kill Nazis with, "I don't want to kill anyone. I don't like bullies. I don't care where they're from."

In one of most fondly remembered scenes from "Captain America: The First Avenger" the scientist who enhances him makes him swear to be a good man – not a great American, but a good human being. "The strong man who has known power all his life may lose respect for that power," he says, "but a weak man knows the value of strength and knows compassion."

That film came out in 2011. In the comics Marvel passed the Captain America mantle to Sam Wilson in 2014, debuting his first comic in 2015. This changing of the guard was always in the offing. But the artists and writer steering the character through that change had not yet spent time in an America led by a racist authoritarian demagogue.

It is not the job of "The Falcon and the Winter Soldier" to speak to that; indeed, the MCU never does directly, although obviously Hydra is a general stand-in for fascism of all stripes. But I am curious to discover what this series ultimately posits about who and what represents the American ideal in a world without Steve Rogers.

"The Falcon and the Winter Soldier" is currently streaming on Disney+. New episodes debut on Fridays.