Let's have a cringey talk about multiracial identity, from "Ginny & Georgia" to Harry and Meghan

Much of America doesn't fall within one category, and one TV show dared to address it in the most uncomfortable way 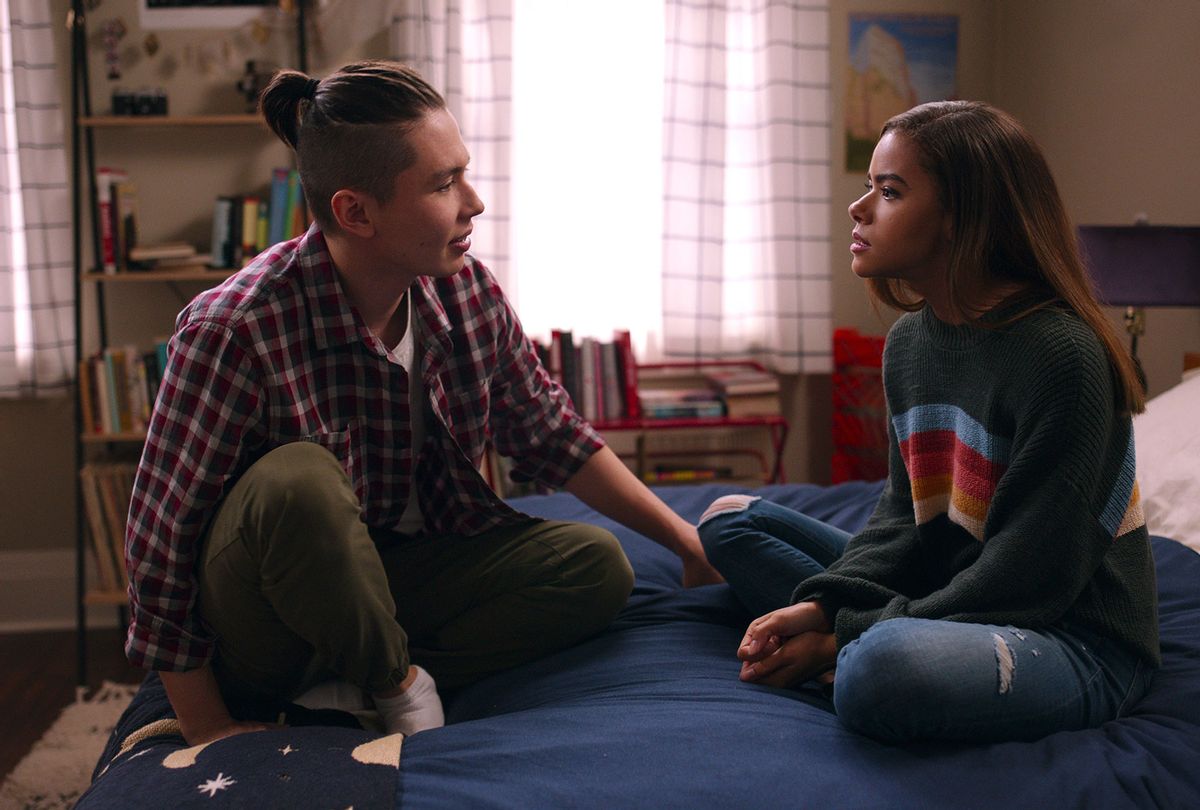 Depending on your tastes, "Ginny & Georgia," a dizzying hybrid of YA drama and old fashioned Aaron Spelling-style sudser, is either a good time, or an overstuffed TV burrito, or a jumbled wreck. People loved or hated the writing, adored or detested its stars, joyfully binged or hate-watched.

Call it like you see it, but here's the thing: Not many Netflix shows that aren't about Airbenders spend much time ranked in its Top 10. This one was still hanging in there as of April 13 — and it debuted in February.

There are many possible and plausible theories as to why that may be, if you cared enough to indulge in them.

An obvious draw is the show's breakout hottie Felix Mallard, a dead ringer for Johnny Depp before he went rotten and cast in a role meant to stir up memories of Dylan McKay and Jordan Catalano. Another point of appeal, or revulsion, is Brianna Howey's delectably cartoonish rendition of Georgia, a con artist always looking for angles and weak spots.

However, you cannot have watched or read about "Ginny & Georgia" without encountering a discussion of a scene between Ginny (played by Antonia Gentry) and her nice guy boyfriend Hunter (Mason Temple).

The two get together shortly after Ginny, Georgia and Ginny's half-brother Austin (Diesel La Torraca) arrive in very wealthy Wellsbury, Massachusetts and Ginny enrolls at the local high school. Most of Ginny's new classmates are white, like the town itself. But Ginny and Hunter are biracial — her father is Black, and he's half Taiwanese.

Given their absolute lack of chemistry one can't be penalized for wondering whether their friends pushed them together based on that point in common, but ultimately that doesn't matter.

In the eighth episode,  "Check One, Check Other," an essay contest on the topic of where they feel most at home forces the couple to confront the varying implications of their individual identities.

Hunter writes a by-the-numbers ode to his guitar, winning polite applause. But the nomadic Ginny, a girl who has never lived in a place long enough to form lasting friendships, follows by spitting out a passionate slam-style poem about society's overly simplified definitions of multi-racial identity.

She gets a standing ovation.

Their teacher Mr. Gitten (Jonathan Potts) previously made racist insinuations about Ginny before, so inevitably the top prize goes to Hunter. At first Ginny swallows her rage, only to regurgitate it later when she and Hunter are alone, touching off an unforgettably awkward screaming match constructed with dialogue loaded for maximum recoil.

It starts when Hunter shocks Ginny by refusing to empathize with her anger at Gitten's excuse that her approach to the assignment was "too unconventional," which she sees as code for "too Black."

Hunter accepts Gitten's explanation on its face before stepping even further out of line to gaslight his girlfriend, proposing that Gitten's animosity towards her may be her fault.

Hunter's way to dealing with the casual slights and micro aggressions he faces each day is to keep his head down, he explains, then adds. "If you're so concerned about him and what he thinks about you, why are you always causing drama in his class?"

From there it degenerates into a horrid walk-off bordering on, as Hunter says, a game of "Oppression Olympics."

"If you really think that if I follow the rules I could have possibly won, you don't get it," Ginny shouts.  ". . . You are closer to white than I'll ever be. Your favorite food is cheeseburgers, and I know more Mandarin than you do! You're barely even Asian."

Somehow the writers find a way to make Hunter's retort worse. "Sorry, I'm not Chinese enough for you," he says. "But I've never seen you pound back jerk chicken. Last time I checked Brodie twerks better than you! And I liked your poem, but your bars could use a little more work, homie. So really, how Black are you?"

First off, yikes. That's the only reasonable snap reaction to this — just, yikes. Their fight doesn't resolve in any meaningful way in part because so much the situational writing in this series scrapes the surface, and also, they're still a pair of dumb teens saying dumb things trying to figure out their place in the world. Apparently the actors themselves came up with the lines that really sock you in the jaw but, let's be real here, production could have used any take they wanted or smoothed it out in the edit.

Despite the serving of this dollop of cringe, though, I'm of the mind that including it in "Ginny & Georgia" is actually a good thing.

To be clear, I'm not trying to posit this scene is a reason to scramble and watch this show. Going by the reaction to it on Twitter, people watched despite its existence, and nobody reading this summary would rightly interpret this as a reason to give it a go. The writing isn't what distinguishes this series, and I'm saying this as someone who enjoyed the fun messiness. Gentry gives "Ginny & Georgia" its soul, and Howie sauces it with vamp appeal, but overall this show travels fast and light and refuses to burrow into thornier places, content to blow up big bubbles, pop them and move on to Georgia's next five-alarm ruckus.

But the sheer clang of that Hunter-Ginny fight means that none of the untold numbers of viewers who watched (reminder, Netflix doesn't release audience data) will forget that it's there. Maybe it'll lead them to interrogate, say, why Macaulay Culkin was perpetuating ignorance when he crowed about having "tiny little Asian babies" with his partner Brenda Song on a past episode of Joe Rogan's podcast, adding he feels he has the green light to make Asian jokes "because I have an Asian girlfriend kinda thing."

Culkin said these things in 2018, truly a banner year for white people in interracial relationships to commit blunders that come back to haunt them. Anyway, this week Song and Culkin announced the birth of their son.

Maybe it has or will lend additional insight into the travails Harry and Meghan have ahead of them as they raise their son Archie and his yet-to-be-born sister, and all the conversations about them to which we have and will be subjected in the press (or even insight into Meghan herself, who is biracial). Or the coded conversations about Kamala Harris who on a typical day is slandered with every old stereotype about Black women in power that exists while occasionally being hit with the Asian model minority stereotype when her detractors are feeling generous.

There is of course the other cruel truth that biracial men are not safe from state violence either. Daunte Wright, a biracial Black man, was shot to death by a Minnesota police officer who claims to have mistakenly pulled her gun instead of her Taser. Wright was pulled over for having expired tabs and air fresheners hanging from his rearview mirror. Keeping his head down was never an option.

The world is awash in dumb conversations about biracial identity, and most of those perpetrating the worst parts them don't notice what they're doing is counterproductive or racist.

And I can't say that scene in "Ginny & Georgia" provides a playbook for entering these conversations correctly and effectively. The entire first season revolves around Ginny's fumbling attempts to root herself in her racial and individual identity with little help from her mother. Its attempt to tease out a young biracial Black woman coming of age story in a place that fetishizes racial identity is, admittedly, imperfect.

Any show trying to dance around the edges of these realities of biracial identity and racism within the vortex of a soapy, melodramatic whirlpool is flirting with the possibility that it'll be despised for the attempt.

This seemed be the case with this show. But a whole lot of people watched "Ginny & Georgia" stumblingly try to suss out what it means to grow up biracial in a society that doesn't quite understand the specificity of that designation, in a forum not charged by celebrity stupidity, institutional injustice and righteous despair. Maybe that counts for something.