From "The Bachelor" to "Bridgerton," examining the fraught dynamics of interracial romance on TV 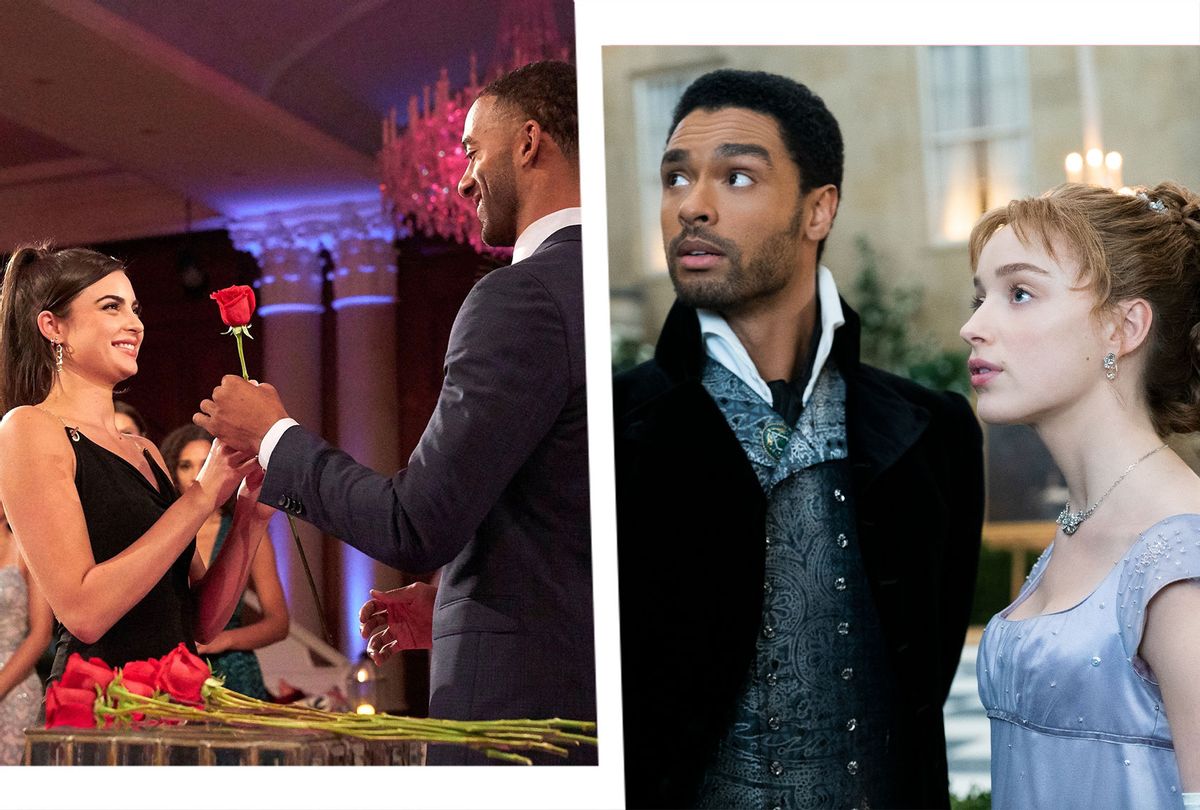 Rachael Kirkconnell and Matt James on "The Bachelor," and Regé-Jean Page and Phoebe Dynevor in "Bridgerton" (Photo illustration by Salon/ABC/Netflix)
--

Regina King's "Saturday Night Live" debut last weekend contained a lot of highlights, but the rollicking fun she had with the satirical game show "What's Your Type?" stayed on our minds all week long.

In this MTV dating show spoof, Instagram-famous host Tampa Bay Janae (Cecily Strong) welcomes King's Kendra Sutter, a marketing supervisor from Oakland. Kendra is an elegant woman who looks like she could land any man she wants, but has awfully specific tastes.

"I'm looking for a sure thing, a man who will worship me. That's why I want a cringey white dude in his early 40s," she explains, throwing in a thirsty shoulder shimmy. "Corny, awkward, or douchey, this freak likes to binge on cringe."

A visibly aroused Kendra (How? Why?) chooses Disaster No. 3, Day's eligible-for-reasons bachelor. He slithers over to her and whines "OK I'm going to hug you now!" before making a smooching noise near her shoulder.

Here, the racial specificity is intentional and, in contrast to "SNL" sketches like "Black Jeopardy," provocative. King's Kendra is a distorted satire of Madison Avenue's figment of interracial harmony, which posits that as long as we sell the dream of an ebony and ivory America, side by side on the collective piano keyboard, eventually we may will their ads to reality.

There's a concrete reason for this marketing direction and indeed, Harris' hard-won rise to the office of vice president is a part of it: Black women are "on trend" right now, hailed for saving democracy and awakening the nation to racial injustice.

We are still ignored by the health care system, treated far worse by the justice system and according to the Center For American Progress can expect on average to earn $946,120 less than our white male counterparts. But portraying our acceptance is also attractive to people who want to feel better about America in 2021.

Thus you may have noticed endless commercials featuring white men snuggling with Black women. Maybe you've seen the automobile ads featuring the white husband driving his Black wife into the woods with their biracial children and zero indication of apprehension about being out in the middle of nowhere.

Still, people probably weren't thinking about any of that as they enjoyed "Bridgerton" or sniffed around this season of "The Bachelor," which follows the love quest of Matt James, the first and only Black "Bachelor" the show has seen in 25 seasons.

Longtime "Saturday Night Live" viewers know that every skit that lands in an episode's pre-"Weekend Update" slot is a response to one of the preceding week's events.

And the seven days leading up to King's Feb. 13 appearance included a crown-worthy cringe moment from "The Bachelor" host Chris Harrison, who tried to casually downplay the significance of contender Rachael Kirkconnell appearing in photos showing her at an antebellum-era themed "Old South" ball. The pictures surfaced on the Internet, as all things eventually do, along with screenshots of instances of her "liking" racist social comments.

"Extra" correspondent Rachel Lindsay interviewed Harrison about the furor, and the host defended Kirkconnell by blaming so-called "cancel culture" for making a controversy out of a bad decision made "five years ago."

Oh . . . oh. Ew. That's some cringe right there. But to really experience some true ovary-shriveling cringe I challenge you to get through Harrison and Lindsay's entire 14-minute conversation without flinching every time Harrison says "woke." It's nearly as terrifying as someone repeating the word "moist" over and over again.

Knowing that Lindsay is the one confronting Harrison's dismissive attitude towards race and racism demonstrates the questionable durability of this "moment" we're in. Lindsay made history as the first Black "Bachelorette" in that show's 13th season in 2017. While that's terrific for her . . . it still took 13 seasons and a lot of hemming and hawing and claiming to fill diversity quotas by highlighting half white, half Asian women in its contestant pool to avoid giving a Black woman a chance to act out its fairy tale.

Despite Lindsay giving him multiple opportunities to course correct Harrison mansplains himself into such a hole that he's announced he's taking a leave from the series.

That doesn't shift the disastrous trajectory of this season's likely outcome. Kirkconnell is on track to be one of the final women vying for James' heart and the production has yet to show her talking to James about what they should expect from each other, and from interacting with the world, as an interracial couple. One that is half racist.

Harrison's inability to understand the problem with this speaks to a larger issue with casting the world as diverse and harmonious. One might think of this as a very "Bridgerton" conundrum: on the one hand, the opportunity to accelerate cultural and social evolution should be maximized as frequently as possible. But as Harrison proves with his clueless extemporizing, tossing a few people of color into arenas of whiteness and calling it progress can cement dishonest impressions of racial equality in place for decades.

Given how easily liberals were lulled into a daydream that we'd arrived in a supposedly post-racial America after Barack Obama's election in 2008, we need to closely observe these new portrayals of inclusion on TV and consistently place them in the context of reality.

"Bridgerton" is Shonda Rhimes' first production for Netflix, a Regency-style series starring a Black man, Regé-Jean Page, as Simon Basset, the Duke of Hastings. Simon falls in love with Daphne Bridgerton, a white woman – and critics have hailed the romance's inclusive casting.

Few interrogate one young Black woman's role in this TV confection: Ruby Barker's Marina Thompson is a mysterious beauty who arrives in London to find a love match, which she in a hurry to do because she's pregnant out of wedlock.

"Bridgerton" is equal parts promising and frustrating, in that it shows a type of period piece traditionally presented as entirely white and places Black nobility in a central role. Audiences love this premise, and they really love Page. But "Bridgerton" also sells an illusory version of progress, evinced by casting a Black woman as a "ruined" character. Barker gives a fine performance in a forgettable part that plays to a musty stereotype.

Don't get me wrong, "Bridgerton" is delightful, but we should also notice its diverse picture of 19th century London society isn't meeting on common ground. This is still an instance of a production inviting a few characters of color into the racial 'burbs. Queen Charlotte is played by a Black woman (Golda Rosheuvel) but she's hovering on the outskirts of the action not at its center; Lady Danbury (Adjoa Andoh) is a delight, but an occasional one. The Bridgertons are white, as are Featheringtons, save for cousin Marina.

The show's producing team appears to be aware of this: When Season 2 turns its focus on the love life of eldest son and heir Anthony Bridgerton (Jonathan Bailey), the woman who captures his heart will hail from a high society family of Indian descent. The character in question has even been renamed from Julia Quinn's novel, which introduces her as Kate Sheffield; on TV the object of Anthony's desire is named Kate Sharma, and played by "Sex Education" actress Simone Ashley.

It may very well be that the view "Bridgerton" paints of the past will eventually look like the multicultural present we live in.

But cringe doesn't observe a schedule, as "The Bachelor" and its history of hanging on to its whiteness for dear life proves. Over its many seasons of courtship Harrison has come to be the prosopopoeia of all the nation's unease over changing demographics.

Stuffed with the three-course meal of insurrection, inauguration and impeachment, our upset bellies aren't quite ready to fully return to a realistic reckoning with race. But we'll romance the false image of unity, soft-scripting fantasies purporting that we're moving on.

Page hosts "Saturday Night Live" this week, and it would be incredible to see him pop up on some kind of ruthlessly satirical dating game. But if we're looking for America's type, it's Harrison – he just wears a more expensive suit that any of those other guys.