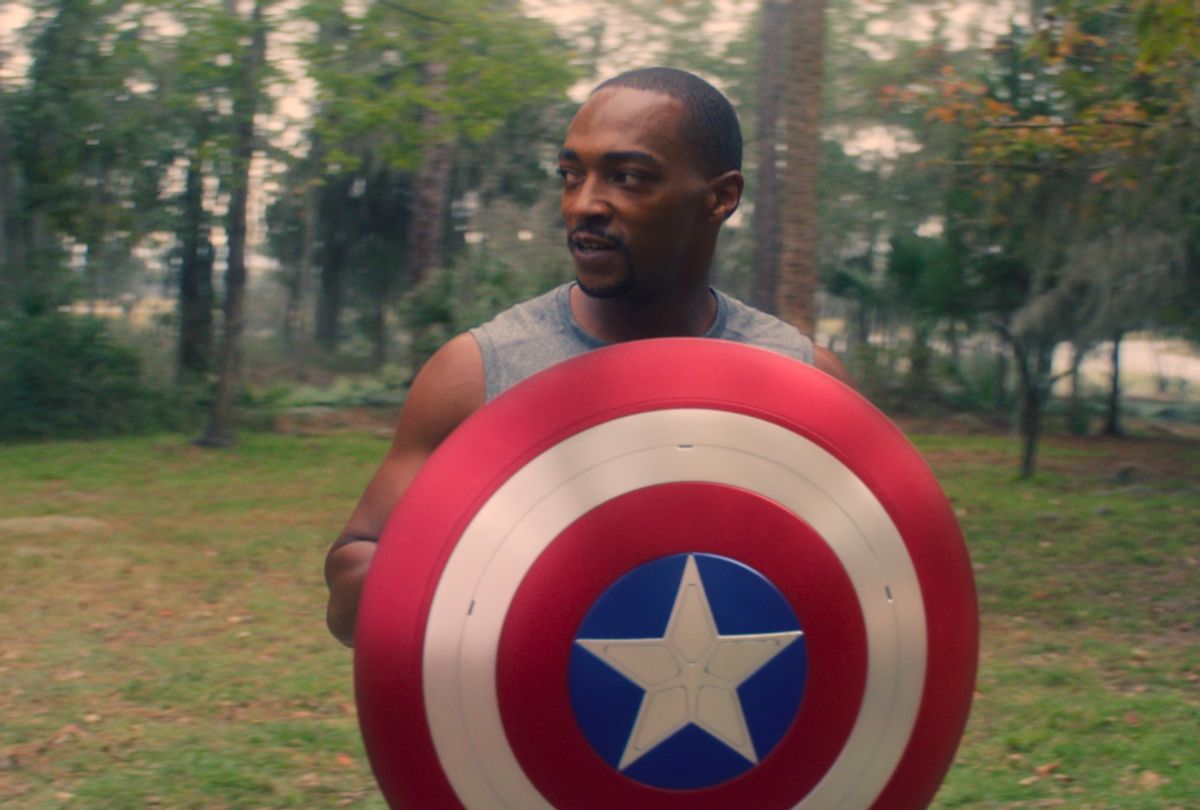 Anthony Mackie in "The Falcon and the Winter Soldier" (Disney+/Marvel)
--

In "Captain America: The First Avenger" Steve Rogers' first official job for the U.S. government was to encourage people to buy war bonds in his best can-do voice as "The Star Spangled Man with a Plan." Steve had serum-endowed super strength, extraordinary speed, an impressive long jump and bravery to spare.

But the military had zero faith in Steve, so they put him in a USO chorus line — kind of like creating a custom sports car that's also flight capable and then bolting it onto a carnival carousel. The only way he could become Captain America was to defy orders, throw himself behind enemy lines to save Bucky (Sebastian Stan) and show off the extent of his capabilities by punching actual Nazis.

Take note that this sequence happens halfway through the movie. Not at the end, halfway.

"The Falcon and the Winter Soldier" is set some eight decades after that in the Marvel Cinematic Universe's timeline, but some things haven't changed much. When Sam Wilson (Anthony Mackie) embarks upon his first mission as Captain America he doesn't wait for orders or permission to wear the colors or carry the shield, because he knows they will never be given. So he steps in and does the job that needs to be done.

If you've been watching "The Falcon and the Winter Soldier" you may ask yourself, "To which job does this refer?" Is it claiming the title of Captain America, or standing up as a Black man in America, with all that implies and risks, to become a symbol what heroism looks like? The answer to both questions is yes.

In the finale, titled "One World, One People," Sam and Bucky charge into the fray to rescue kidnapped members of the Global Repatriation Council from a group of super soldiers called the Flag Smashers, and we're reminded that Sam does not have amplified powers. He has been gifted a fresh uniform from the Wakandans, complete with wings and a jet pack that lends him a strength boost when he needs it, but that's about it. Otherwise it's all about his skills.

That engine is very handy for battling a group of serum-jacked scrappers, but it's also useful when he has to do that classic superhero task of stopping a large vehicle full of people from falling off of a bridge. Onlookers film it all for social media, of course, and bust out exchanges such as:

Sam's Captain America is very much a hero, and like Steve, he knows he has to put on a show.

If "The Falcon and the Winter Solider" were nothing but an action romp, all the slam-bam sequences exploding around Sam's debut would have made for a decent middle-of-the-plot peak on our way to a better climax.

But six episodes is all we get of "The Falcon and the Winter Soldier," netting us a frenetic closer overflowing with haymakers, face kicks, bip!-boom!-pow! and grunts, surprise battlefield appearances by Sharon Carter (Emily VanCamp) and disgraced former Captain John Walker (Wyatt Russell), along with one supposed revelation that anyone who can do basic math should have put together some time ago. For all of that, the hour contained very little emotional depth.

If great is what you want, watch the fifth episode. Also, bear in mind that what series creator Malcolm Spellman sought to accomplish in telling Sam Wilson's origin story and where I'm suspecting Marvel required him to land this plane were probably destined to be at odds. Sam's journey is a poignant one, but steering it into whatever dock Marvel built for it was bound to shortchange the development and service of other themes.

For one thing, compressing the plot into six episodes limited Bucky's storylines. Considering his prominence in several of the films, that's excusable. Sam's origin story is the one that needed exploring given how much of a third wheel in the Steve-Bucky dynamic he often seemed to be. Also, he's the one destined to pick up that historically loaded hunk of vibranium, not Bucky.

Another subplot deserving more attention is Sam's conflicted feelings about the young Flag Smasher Karli Morgenthau (Erin Kellyman), whose struggle he understands. And when they fight, he makes a point of being entirely on the defense . . . which makes her demise at the hands of a less caring person inevitable.

But if Sam had anything else to get off his chest, surely he did it in the finale. The new Captain's debut may be recalled less for his daring and bravery than his lengthy speeches delivered in front of news cameras. Everything stops stock still for Sam to explicitly spell out precisely what the audience is supposed to take away from this story — other than the thrill of watching a Black man rise from auxiliary Avenger to the A-Team.

As Sam takes members of the Global Repatriation Council to task for demonizing poor people, Mackie's delivery is rivetng. "You have to stop calling them terrorists," he says. "Your peacekeeping troops carrying weapons are forcing millions of people into settlements around the world, right? What do you think those people are going to call you?  These labels — terrorists, refugees, thug — they're often used to get around the question why."

When a powerful GRC senator informs Sam he doesn't understand, the new Captain scoffs at him

"I'm a Black man carrying the stars and stripes. What don't I understand?" he asks. "Every time I pick this thing up, I know there are millions of people out there who are going to hate me for it. Even now, here, I feel it. The stares. The judgment. And there's nothing I can do to change it. Yet I'm still here."

Then comes the kicker, bam, straight to the chest: "No super serum. No blonde hair or blue eyes. The only power I have is that I believe we can do better. We can't demand that people step up if we don't meet them halfway."

Allow me to be the first to admit that I enjoyed being pandered to in this fashion, especially at the end of this particular week. Precisely when we thought we could exhale at hearing the jury in Derek Chauvin's trial come back with a guilty verdict on all three counts against him, we learned that Columbus, Ohio, police gunned down 16-year-old Ma'Khia Bryant. While we processed that, hundreds gathered to pay their respects at the funeral of Daunte Wright, another unarmed Black man killed by a cop.

Hearing those words in such an exhausting atmosphere lifts the spirit. There aren't many Black superhero shows or blockbuster movies out there, and there are even fewer that take the effort to show a figure like Sam using his pull to set the woeful history of abused and tortured Black super-soldier Isaiah Bradley right and get him his own dedication in the Smithsonian.

If Spellman and his co-writer Josef Sawyer wants to indulge in a hero's sermon to make a point, terrific.

Through another perspective Sam's speech is a painful reminder that his America is not our reality, not at all. His declaration may even sound like a hollow, liberal version of "America: We're better than this!" agitprop.

Removing the emotionality from it, slathering heavily messaged dialogue between firefights and conflagrations might be OK for a big dumb action flick, but it's simply bad TV. And committing to some version of this throughout the season shorted a number of secondary characters and defanged the season's main adversaries. 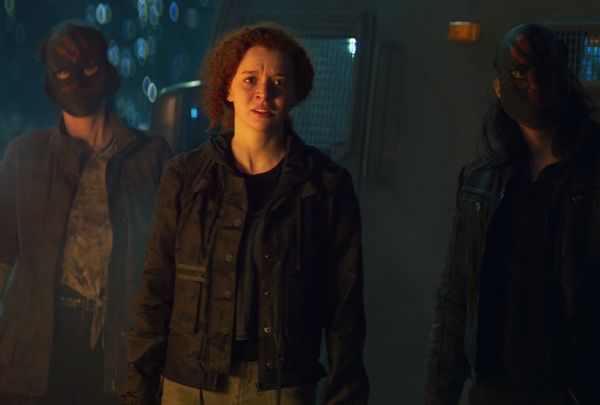 Erin Kellyman in "The Falcon and the Winter Soldier" (Disney+/Marvel)

Kellyman is a capable performer but wasn't afforded much of an opportunity to explore Karli's range, and her group lacked the flavor and spark to make them a pressing menace. When Zemo's man ended the remainder of them I was relieved that we wouldn't be seeing them again.

Russell's John Walker is more fearsome, but he's also an antagonist that came to the series with an established background. Even if you aren't familiar with his mythology, surely you know some version of guy. He's a Fox News Nation hero. Indeed, one of Walker's most intriguing moments in the finale wasn't his fight scene — it really wasn't, ouch — but the look Russell sets around Walker's eyes and mouth as Sam talks about judgment and stares. It's raw resentment, the kind that the right wing gorges upon.

Sure enough, in the epilogue we see Rebekah Mer—sorry, Countess Valentina Allegra de Fontaine (Julia Louis-Dreyfus, who is flawless! I have no notes!) reappear with a black super suit for John and a new moniker.

Let us not forget Ms. Sharon Carter, the exiled government agent woman whose pirate country home is bedecked with stolen masterpieces and other black market goodies . . . and yet somehow, nobody bothered to connect Sharon's wealth and pull to the biggest bad in that part of the world, the Power Broker. It's her! Duh-doy! And now that Sam has scored a pardon for Sharon, placing her back in government and with full access to prototype weapons and state secrets . . . why, I'm sure that'll all work out splendidly for the first Black Captain America.

As for Bucky, he managed to make his amends with Mr. Nakajima (Ken Takemoto), the man whose son he killed as the Winter Soldier, tying off that loose end. Stan made a meal out of the dramatic crumb that too-brief scene granted him; I wanted more, but I'm not sure how that would work.

Wouldn't it be wonderful if we got to see some of that weirdness Val mentioned kick off, say, next week?

No such luck. Whenever these adventures resume — that is, whenever the freshly announced "Captain America 4" comes out — maybe Spellman will have found the same kind of narrative balance that Sam and Bucky's partnership achieves at the end of the show, as they enjoy a family cookout on the bayou.

Now, and satisfyingly, they're known as "Captain America and The Winter Soldier." If only the story hadn't ended just as it was starting to get good.

All episodes of "The Falcon and the Winter Soldier" are streaming on Disney Plus. 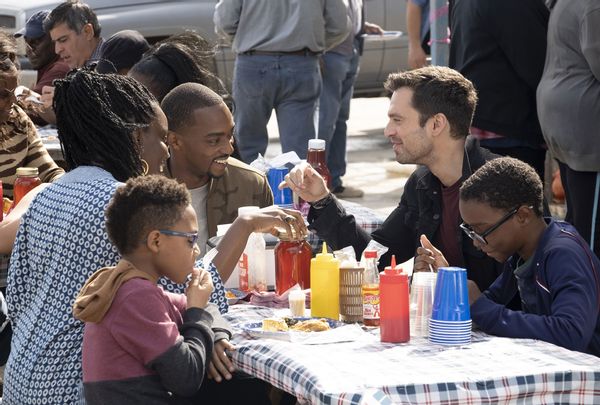 "The Falcon and the Winter Soldier" (Disney+/Marvel Studios)