What "Loki," "Lucifer" and "Cruella" tell us about our love affair with rewriting ugly stories 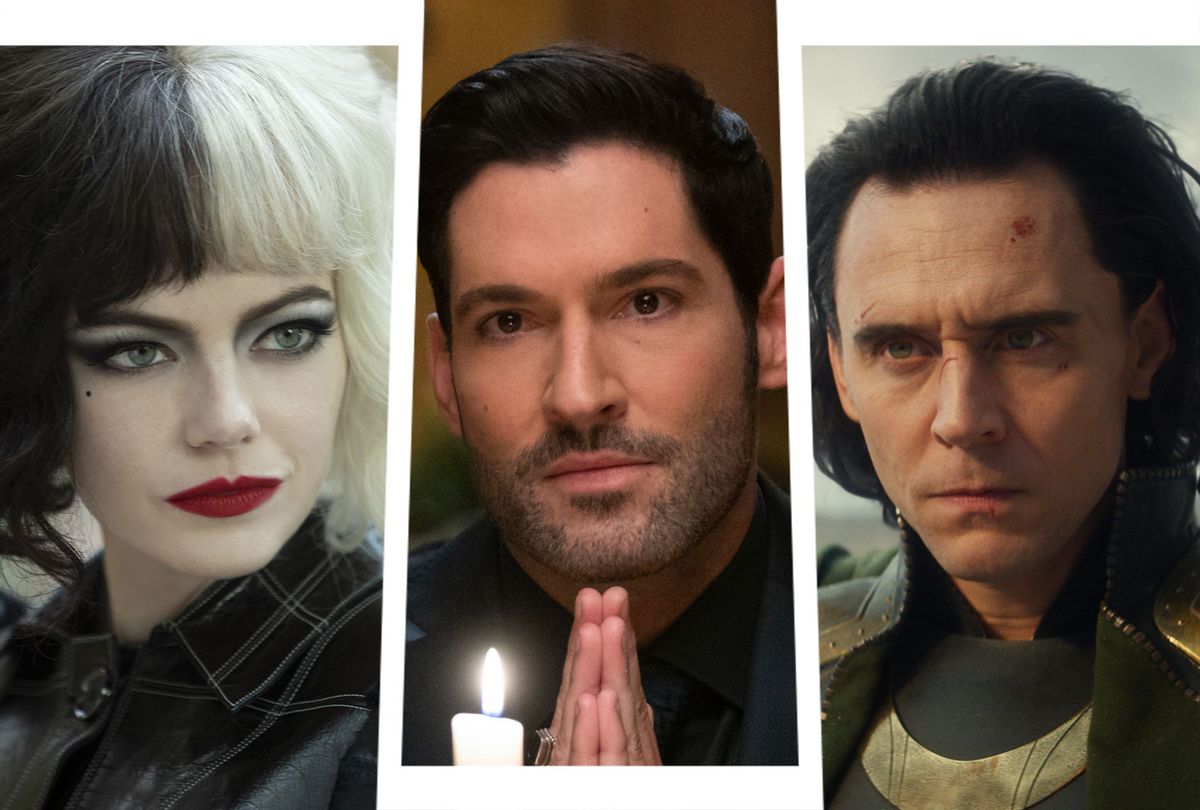 In the opening episode of "Loki" the God of Mischief explains himself to his jailer, the Time Variance Authority agent known as Mobius. "I don't enjoy hurting people," Loki says. "I do it because I have to. Because I've had to. Because it's part of the illusion. It's the cruel, elaborate trick conjured by the weak to inspire fear."

"A desperate play for control," Mobius replies, adopting an empathetic tone. "You do know yourself."

Mobius is trying to win Loki's cooperation in this scene; hence the audience may understand the sympathy as a purposeful act. Assuming you know Loki, and that you've been using your eyeballs in the process of watching this episode, that last line might throw you.

See, prior to this exchange Mobius screens a montage of Loki's greatest hits – a parade of lies, times he's cheated and stabbed allies, sold out his brother Thor, and inadvertently caused the death of the person he loved the most. At one point Mobius slows the footage to analyze Loki's knavish grin so he can see what everybody else sees, which is someone who delights in others' agony.

How else would a reasonable person see someone like that except as a villain? Marvel intends to spend five more episodes coming up with an answer.

But it's not as if any defense is required – "Avengers" followers love Loki. Tom Hiddleston fans love watching him play Loki. Also, and importantly, seeing the world from the villains' perspective is very on trend. "Loki" also – some would say mainly – serves a corporate purpose, which is to explore the concepts of timeline continuity and multiverses as a reference point for upcoming Marvel Cinematic Universe theatricals.

From our own reality's perspective, however, it is precisely on time. "Loki" is a beneficiary of our collective yen for rewritten histories and softening the image of evildoers. This doesn't expressly refer to its premiere's proximity to Disney's "Cruella" or the dawning of new episodes of "Lucifer" on Netflix, but culture in general.

Of course, and some would say mainly here as well, all of these are the product of milking their respective intellectual property cows for all they're worth. Hiddleston's Loki has panache, but Cruella de Vil has been a fashion inspiration, for better or worse, since 1961's "101 Dalmatians," less for her love of fur than her black-and-white shag. Tom Ellis' Lucifer is a handsome work of good tailoring and an extensive knowledge of top shelf liquors.

But one wonders if they'd have half as much appeal in a time when America wasn't so broadly invested in rewriting the past, distant and near.

Before we go on, let's establish that none of this is meant as an indictment on any of these TV shows or movies or their entertainment value. "Lucifer," in particular, is widely loved series because it's sturdily written, attractively produced and has an alluring star in Ellis. Its delectably bingeable fifth season is currently among Netflix's most popular titles for that reason.

"Loki" was highly anticipated and dominated the conversation this week for similar reasons. "Cruella" has garnered more uneven reviews; still, at the very least, if you don't ponder the story too extensively, it's a stylish good time.

Then again, consider how squeamish it has been on some level for parents to explain Cruella de Vil to their kids. Legend has it she likes to skin puppies. For several movies now, animated and live-action (via the 1996 version of "101 Dalmatians," starring Glenn Close), we've watched her pursue that hobby with passion and fury.

But "Cruella" explains that's a lie, propaganda, fake news! She's always loved puppies. She has her own dog, actually. The real evil is her envious rival in the fashion world, Emma Thompson's Baroness Von Hellman, who is wealthy and cruel and – gasp!— has zero compunction about murdering people, including babies. Meanwhile our titular antiheroine is presented as a rebel, a great talent, avant-garde, a little mad and even in her kinder moments, concerned with elevating her own position in the world. But a puppy killer? She would never.

If only we tried walking in her shoes, we'd see her differently.

By no stretch is this evildoer-to-dirtied-angel flip a recent development in the real world or in fiction. Authors have been reconsidering villains long before that, with Gregory Maguire's 1995 novel "Wicked: The Life and Times of the Wicked Witch of the West" being the most influential recent title in this regard.

It begat a wildly successful musical, of course, and no doubt led to the manifestation of Disney's "Maleficent" in 2014, staring Angelina Jolie as the popular villainess – who, as we now know, had her reasons. Mistress of Evil? That's not how we see it.

People flocked to theaters to get her side, mainly drawn by Jolie's alluring costumes (the Disney villain films are nothing if not showcases for the company's costume departments). But maybe the smallest part of its appeal hooked into our slow and steady rewiring to accommodate false equivalency. That easier to do with legend than with reality . . . hypothetically.

Conservatives have been altering history books for decades in order to make the indefensible palatable and maintain the sheen on America's heroism. What's frustrating is when those tasked with holding the truth play along. Such was the case with a recent NPR report on a Jacksonville, Fla. high school named after Confederate general Robert E. Lee that was considering a name change.

A portion of the report recorded a debate between two alumni, one of whom is pro renaming, citing that doing so aligns with the desires of the school's 70% Black student population, and one who is against. In the course of his argument the "against" party eventually admits he doesn't believe the Civil War was fought over slavery, and he'd have no problem attending a high school named after Adolph Hitler if its football program were strong enough.

This means the report presented a viewpoint based on data parallel to one based on racist feelings, and summed it up thusly. "We never expected these people to come to some sort of resolution. I mean, they couldn't even agree on the facts of the Civil War. How were they going to find common ground on renaming a school? But they showed up. They listened to each other. And when the state of our civil discourse is so low, there is value in that alone."

Except . . . there wasn't much value here. There was a viewpoint based on fact, and a belief in a lie that for too many people feels nicer than the truth. (At any rate, the county school board voted to change the school's name to Riverside High School.)

Loki's broader lore commented on this very tendency in 2016 with Marvel's "Vote Loki" comic book series, a head-on commentary on Donald Trump's brazen lies and attention-getting bamboozlement during his first run for president. Within its pages Loki's behavior grows ever more outrageous, gaining him more attention, more followers and strengthening his sway over the public at each turn.

"America, if I were your president, I'd have the guts to lie right to your face," Loki calmly guarantees. "And you'd love it."

Some five years after that comic's run of many of the non-magical extremes that writer Christopher Hastings imagined have manifested in some way in our politics. We became so used to Trump making disprovable claims and his fans loving him for every lie that it became normal for his loyalists to stop believing their own eyes.

On Jan. 6, when insurrectionists followed his exhortations to storm the capitol building and hunt down fellow lawmakers, including his own vice president, the world watched in horror. Months later the ex-president's followers correctly surmised they could get away with a rewrite. Texas congressman Pat Fallon called the insurrectionists "a mob of misfits." Georgia representative Andrew Clyde put it another way: "If you didn't know the TV footage was a video from January the 6th, you would actually think it was a normal tourist visit."

And it keeps going, in Congress and via Fox News Channel's echo chamber.  Texas politicians are concocting an "1836 Project" dedicated to promoting "patriotic education" that "ensures future generations understand Texas values" in response to the New York Times' "1619 Project." That Pulitzer Prize-winning effort shows that every social, economic and political structure in America is rooted in slavery.

Examining its findings and eliminating any lingering inequities left by that institution's stain on our history would not be pleasant or comfortable. It is much easier to gin up outrage over the supposed divisiveness of "critical race theory" and liken that mythical malice to Marxism.

America is defined by its dedication to the illusion of equality and endless opportunity, of being best. In that framework, ugliness is unacceptable and power is a virtue. So if a villain has power, maybe there's something about them we're not quite understanding, that we can learn from. Perhaps there's another side to the story.

These real, arduous struggles between truthtellers and the stubbornly blinkered exist for reasons similar to those urging us to reconsider our favorite fictional scoundrels in a kinder light, which is that we need to "what about" everything, that we're willing to countenance villainy as bad spin. We'd rather be comfortable than acknowledge sometimes evil is as evil does.

Provable fact, recorded and witnessed, should not be malleable. Fantasy always is, as the more complex "Lucifer" demonstrates. The devil as he's initially imagined by Neil Gaiman, Mike Dringenberg and Sam Kieth, is a suave skeptic of the whole notion of God's plan. In the original comic book he's a rebel and a nightclub owner. Television writers partner him with a detective to solve crimes, so he can earn his way toward redemption and so his story fits a workable TV model.

"Lucifer" aired its first three seasons on Fox starting in 2016, making it a TV show that both commented upon and provided escape from the last administration's culture warp. In that light Lucifer Morningstar is a particularly attractive character because he cannot lie.

What should be a virtue condemns him; honesty is painful. In its newest episodes we discover that the devil's irredeemable reputation is largely the result of a smear campaign waged against him by his brother Michael (also Ellis) who rules with fear.

In the world of "Lucifer" the season's main conflict resolves on a note of hope, and a victory won from an exceedingly uncomfortable sacrifice. Through extreme pain the hero sets the world right . . . and it takes him years of unpleasant, irritating excursions and self-reflection to find a way back to an honestly won, legitimate version of grace.

It's a great story and one that should reflect how the real world works, but fantasy is almost always prettier than reality. And while we shouldn't penalize ourselves too much for loving illusions about villainy created for our pleasure, maybe we ought to ask ourselves why we love these pretty revisions . . . and what we're willing to accept as truth with regard to the story we're living through.