"NRA shot itself in the foot": Schumer calls for DOJ probe of possible bankruptcy fraud

How did NRA declare bankruptcy "and still have millions of dollars” to spend on attack ads, Senate leader asks 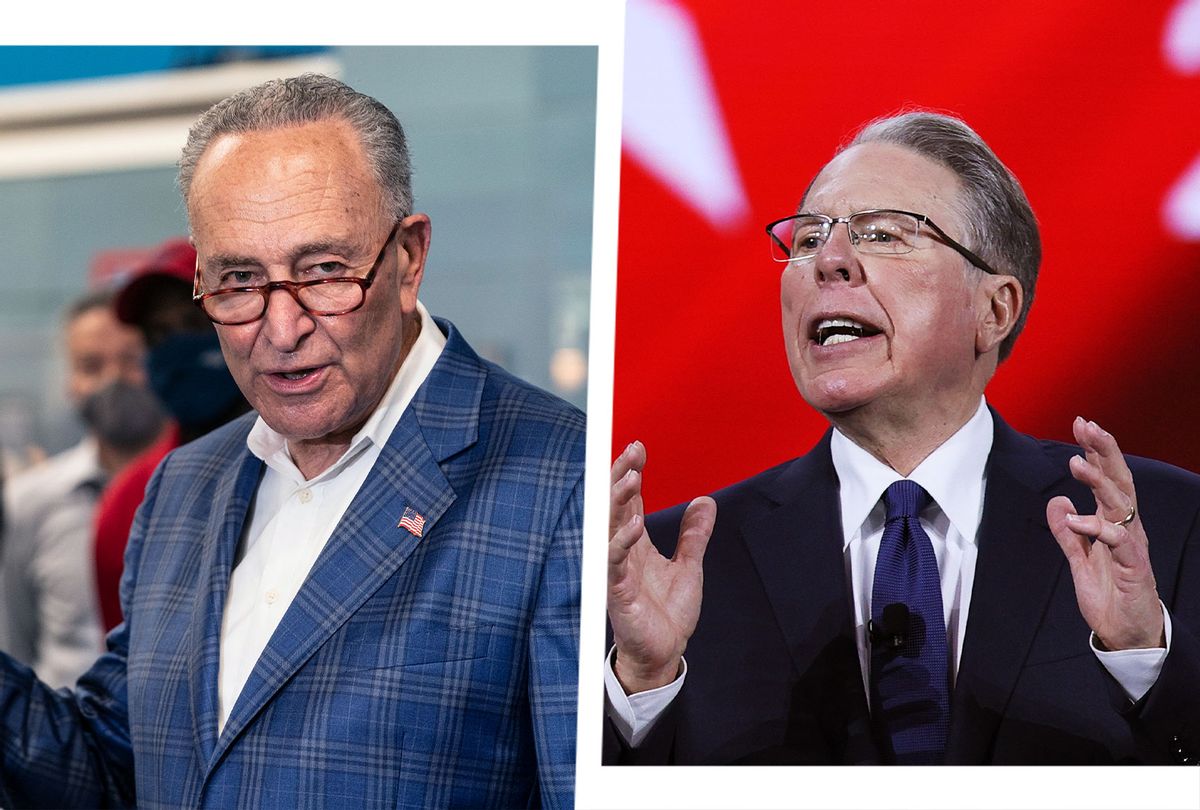 Senate Majority Leader Chuck Schumer, D-N.Y., called on Sunday for the Justice Department to investigate the National Rifle Association for fraud over the group's ad expenditures amid its failed bankruptcy case.

The NRA filed for bankruptcy in January in a bid to relaunch the organization in Texas under "the protection of the bankruptcy court" despite boasting that the group was "in its strongest financial condition in years." The bankruptcy filing came after New York Attorney General Letitia James filed a lawsuit seeking to dissolve the NRA over allegations that executive vice president Wayne LaPierre and other top executives had "funneled millions" in donor funds "into their own pockets." A Texas judge in May dismissed the bankruptcy case, ruling that it was not "filed in good faith" and was instead an attempt to "gain an unfair litigation advantage and ... was filed to avoid a state regulatory scheme."

Schumer this week said that the DOJ should investigate millions in advertising expenditures the NRA made while claiming to be bankrupt.

"NRA claimed they were 'bankrupt' to escape the NY Attorney General's jurisdiction," Schumer said on Twitter. "But they've been spending millions on ads, mailers, texts, TV, & more to stop common sense gun reforms. The U.S. Department of Justice must investigate if NRA committed fraud or other offenses."

"At the same time they're saying they're bankrupt, they're spending millions of dollars on ads to stop universal background checks," Schumer told the Associated Press. "That demands an investigation by the Justice Department."

"How can you say you're bankrupt at the same time you have millions of dollars to spend on ads throughout the country trying to prevent universal background checks fundraising and other things that will stop the killings on the streets?" the majority leader told the AP. "The bottom line is the NRA shot itself in the foot when they declared bankruptcy and still have millions of dollars."

The comments drew an angry reaction from the NRA, which described his call for a probe as a "tyrannical threat." NRA lawyer William Brewer accused Schumer of "promoting a false narrative."

"The NRA pursued a financial reorganization for one reason: to streamline its financial and legal affairs. The truth is, the proceedings in question confirmed what the Association disclosed from the outset — the NRA is financially solvent, and the filing in Texas was part of its long-term plans to effectively serve its members," Brewer said in a statement to the AP. "Although the bankruptcy court did not believe the filing was for a proper bankruptcy purpose, it specifically did not find the NRA acted in bad faith."

The NRA's bankruptcy bid was highly unusual from the start. LaPierre admitted during the proceedings that he kept the bankruptcy filing secret from nearly all the group's top officials and its board of directors. NRA board member Phil Journey called the ploy a "fraud perpetrated on the court" in May.

Federal bankruptcy Judge Harlin Hale ruled that the bankruptcy petition was "not filed in good faith" and cited "lingering issues of secrecy and a lack of transparency" at the group, noting that he was particularly troubled by "the surreptitious manner in which Mr. LaPierre obtained and exercised authority to file bankruptcy for the NRA."

The ruling allowed James to renew her bid to dissolve the group and the months-long trial forced officials to confirm some of the allegations brought by her office.

LaPierre admitted to taking annual trips to the Bahamas on a luxury yacht owned by an NRA vendor, which he failed to disclose to the group. LaPierre's private travel consultant, who was paid $26,000 per month, testified that LaPierre instructed her to doctor invoices for private jets to hide their real destinations.

James' lawsuit accuses the NRA of reimbursing $1.2 million in personal expenses for LaPierre and claims he spent another $3.6 million of the group's money in just two years for private travel and executive car service, and millions more for private security for him and his family. The lawsuit also accuses NRA executives of failing to report income by funneling personal expenses through a public relations firm and awarding big contracts to friends and associates.

The NRA in response filed a federal lawsuit accusing James of a " blatant and malicious retaliation campaign against the NRA and its constituents based on her disagreement with the content of their speech" but ultimately dropped the suit last month.

James said that the group's decision to drop the lawsuit was "an implicit admission that their strategy would never prevail."

"The truth is that Wayne LaPierre and his lieutenants used the NRA as a breeding ground for personal gain and a lavish lifestyle," she said in a statement. "We were victorious against the organization's attempt to declare bankruptcy, and our fight for transparency and accountability will continue because no one is above the law."