I grew callaloo to spite my mom: How cooking a Jamaican dish healed old wounds, plus how to make it 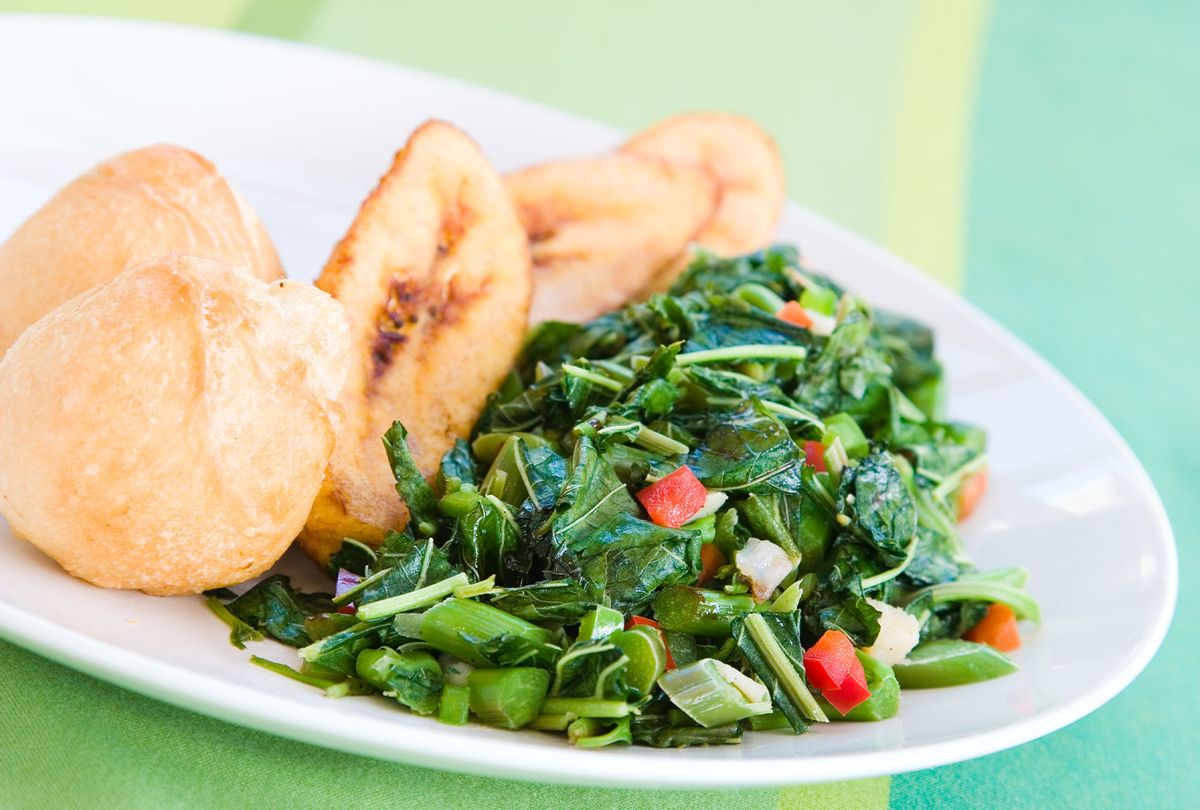 Growing up, my mom had dinner cooked and my lunch packed by the time I woke up every morning. She made sure I never had to fend for myself when I returned from school and she was at work for several more hours. She didn't encourage me to learn how to cook because she was always happy to prepare our meals. Still, I managed to inherit her sense of seasoning food just right (most of the time) without measurements.

There's an unbreakable bond in providing, in feeding. When my newborn refused to latch onto my breast, the expectations I'd placed upon myself were shattered. I refused to give up, and professionals throughout the Capital Region were stumped about how to help him, how to help me. "He won't starve himself," my midwife said. One night, my son cried for almost an hour as I attempted every position and latching technique to help relieve the over-supply of milk from my painfully engorged breasts. I, too, broke down crying, accepting defeat. I hooked myself up to the pump, then handed my husband a bottle of milk, which he finger-fed to my son as I took a shower in tears.

A few days later, my mom came to visit toting a Macy's shopping bag packed with cornmeal to make porridge and beef kidney with green bananas and dumplings, as if none of those things were available in Albany. In Jamaican families, intergenerational living arrangements are normal, so our plan was always to have her come live with us permanently once she was ready. We closed on our house when my son was 17 days old. We made sure it had enough room for all of us. But instead of making Albany her full-time residence, my mom traveled from Brooklyn every week to help with childcare. When she was around, she was happy to rock my son, sing him nursery rhymes and bathe him. Then, she would cook, telling me "you need to eat to keep up your milk supply." I pumped, and my husband fed. My mom cooked, and I healed emotionally.

My mom didn't get to enjoy raising her children on her own because she worked a lot when my sister and brother were growing up in Kingston, Jamaica. My sister was nine years old and my brother was only seven when my mom obtained a visa to come to the U.S., where she found work as a live-in nanny. She became determined to pull her family from the threat of the violence back home that stemmed from the political conflict between the Jamaican Labour Party and People's National Party. After two years apart, my mom secured her green card and arranged for her children and then-husband to join her in America.

Eight years later, my mom had been a room attendant at the Waldorf-Astoria Hotel for some time when she met a charming Nigerian diplomat with the classiest snakeskin shoes she had ever seen and a dashing dimpled smile to go with it. He told her that he never used the Waldorf's entrance on Lexington Avenue — only the grand Park Avenue entrance. When he kissed her hand, she thought she had met a prince. He took her to a fancy little restaurant on 53rd Street and Lexington Avenue, and after a short courtship, I was conceived at the Roger Smith Hotel. My father lost his lucrative position when Nigeria was in political chaos following the overturn of MKO Abiola's election win. He couldn't live up to the promises he'd made to my mom, also in part, because he was already married with children. So, she raised me with her village of friends and family in Brooklyn and taught me that I was African royalty because that's what she believed.

Even in retirement, NYC still invigorated my mother. After taking care of us all during the week in Albany, she was happy to return to the city on weekends to shop at Macy's Herald Square, where she chatted with her favorite sales associates. She showed them photos on her phone of my son who looks so much like her and then bought him designer outfits on sale — but not before directing some tourists to the McDonald's on the 7th floor so they could eat and let their children rest their feet for a while. On Sundays, my mom would go to church and tell my godmother and aunt all about the new house and the baby. Then she'd return to her apartment and cook more food than one person living alone needed for Sunday dinner, which would inevitably be brought to Albany on Monday morning. 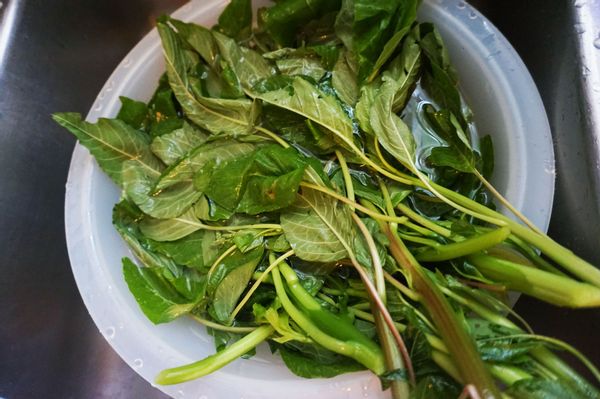 The first spring my mother stayed with us, she suggested we grow callaloo in the backyard along with tomatoes and cucumbers. Callaloo is the leaf of the amaranth plant, and it's often prepared in the same way as spinach. Back in Jamaica, it was a staple on my grandmother's farm, and my mom ate it often as a child. Cooked up, callaloo is one of those dishes that is filling and doesn't need to be paired with meat. Just some boiled or fried dumplings, green bananas and yam would be tasty with it, which was good for my mom because my grandmother couldn't afford to keep much meat when she slaughtered one of her animals to sell.

As much as we tried, the callaloo in my backyard just wouldn't grow enough to provide more than a couple of meals that first summer. By the winter, things weren't working out with my mom living with us, either. She became the third parent in our household, and tensions rose because our parenting styles differed.

Once I got pregnant with my second child, a disagreement over nighttime feedings resulted in her leaving. I felt that my nearly two-year-old son would eat food during the daytime if we stopped giving him the 20 ounces of milk he demanded throughout the night. He cried for an hour, and my mom stomped through the house calling me wicked. "Don't you have a heart?" she asked me.

I snapped back, "I'm his mom, and I don't need your opinion." She decided that our living arrangement could no longer work, rushing back to Brooklyn with no plans to ever return. Her parting words to my son were, "Granny loves you. Take care of yourself."

Right on cue, the pandemic turned our lives upside down. My mom suddenly had no Macy's to go to and no one to talk to in person. She grew lonely and started calling my husband to talk to my son more and more, eventually learning how to video chat on Facebook Messenger. 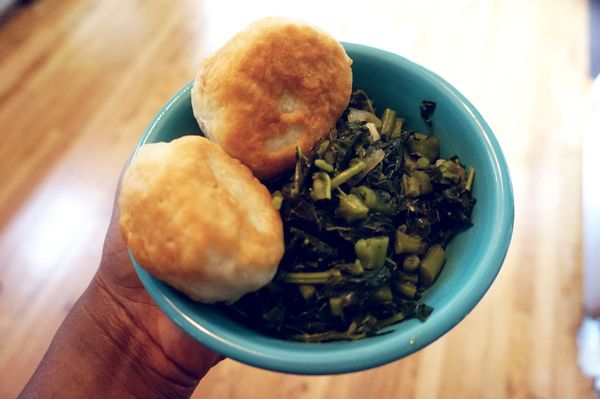 As the weeks and my pregnancy progressed, I began craving Jamaican food. Whenever I had a pelvic floor physical therapy appointment, I'd return with a large container of ackee and saltfish from the local spot that really was not on the way home. After the few in-person appointments with my midwife, I'd silently eat curry goat with rice and peas and plantains in the car outside another Jamaican restaurant. The tastes transported me back to my childhood, when my mom would relish in cooking favorite foods from the island.

I became adamant that I would grow callaloo. It was to spite my mom, to show her I could do it, that we wouldn't suffer without her taking care of us. I wasn't so sheltered that I needed her help to mother my children the way that is right for me. I bought all kinds of plant food, added eggshells, moved the plants to different parts of the yard, anything I thought would trick the callaloo seeds to produce the greens I was so desperate to cook. Every day, I checked to see if there was growth, but it began to feel futile.

I rarely cooked throughout my pregnancy as a result of nausea and fatigue from standing up for long periods, so my husband took on the role of family chef. But he feared to attempt Jamaican food. He left his part-time job and took on much of the childcare, but working from home while pregnant and being there for my son was wearing on me, and my mom deeply missed her days with him.

Time — and desperation — heal some wounds, so my husband brokered talks to get my mom back to us. After she returned towards the end of my pregnancy, she didn't cook anything for us for two weeks. She made it a point not to step on any toes. She would just cook her own separate meal every evening while the rest of us ate whatever my husband prepared. Outside, the callaloo leaves finally sprouted, almost ready for a first harvest. I yearned for her to cook some Jamaican food for me, and then one day, without warning, my mom said, "The callaloo is growing well. Want me to make some for lunch?"

While it would be a stretch to say that enjoying a meal of those leafy greens with fried dumplings was the best peace offering, it was what I needed to begin to heal from the pain I'd been carrying for months. My mom stayed for six weeks after I gave birth to my daughter, but then she returned to Brooklyn. I miss her, especially her tales of life back home. We haven't come up with a plan for her move to Albany yet. I now know that there really is such a thing as too many cooks in the kitchen, so while I don't think it would be a good idea for us to live under the same roof, maybe we can find her an apartment nearby. My husband and I are even considering selling our current house in favor of a two-family property. Something with a garden. 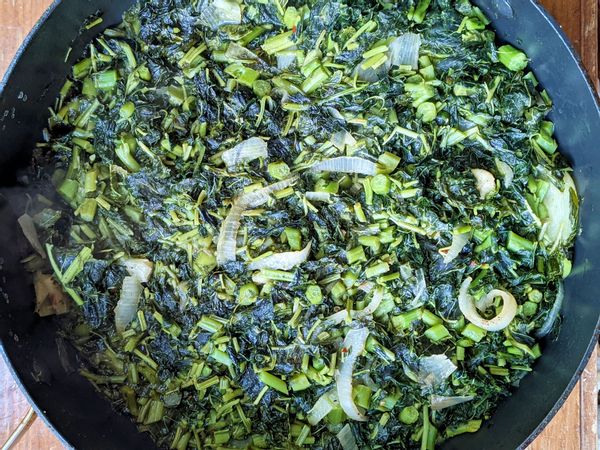 Jamaican Callaloo in a pot. (Photo provided by Antoinette Deitcher)

1. Working from the bottom, peel callaloo stalks just up to where the leaves begin. Discard peelings. Roll callaloo into a bunch, and cut into small pieces.

2. Mix all ingredients together in a pot with 3 tbsp. water. Cover with lid on very low heat. Let steam for 10-15 mins, stirring occasionally. 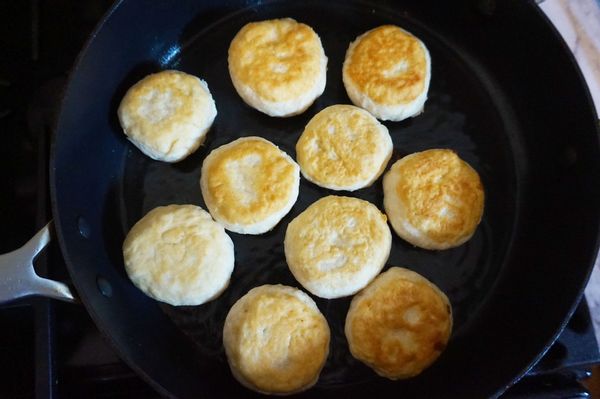 2. Slowly add water, and knead until dough is firm. (You may need to add a bit more water.)

3. Heat enough oil to cover the bottom of a frying pan.

4. Break off 2-inch pieces, and form into the shape of biscuits.

5. Fry for 4 minutes on each side, until golden brown. Cover the pan with a lid while the second side is frying to ensure the inside cooks.

6. Remove from the pan, and place on a paper towel-lined plate to drain oil.