This crunchy, hearty Chicken Frito Salad is a sensational dinner that doesn't require a lot of prep

Salon Food talks to Molly Baz about cooking with confidence, rotisserie chicken and how to elevate our salad game 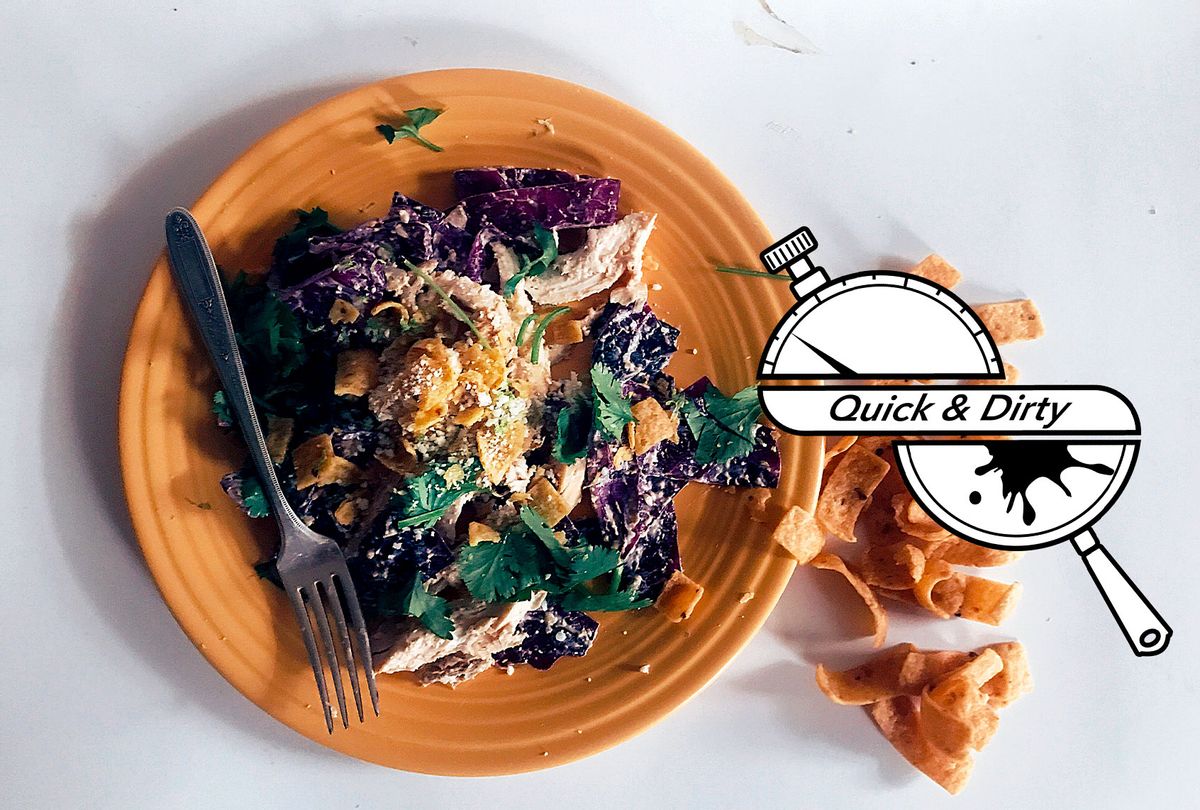 New York City has everything — except Corn Nuts. I've spent the better part of an early morning scouring every bodega and supermarket above 168th Street in pursuit of the key ingredient in a promising recipe from Molly Baz's mouthwatering "Cook This Book: Techniques That Teach and Recipes to Repeat." I'm driven by the prospect of a crunchy, creamy, salty, savory and sweet salad involving rotisserie chicken, cabbage, cotija and Corn Nuts. But Corn Nuts are apparently the new toilet paper, because they're nowhere to be found. I consider a host of alternatives, from plantain chips to pork rinds to wasabi peas before I finally settle on Baz's own runner-up suggestion.

Sometimes in life, you go out for Corn Nuts and come home with Fritos. This isn't a bad thing. This isn't a disappointment. Could anyone ever be disappointed by Fritos? Of course not. But if you've ever felt tyrannized by the rigidity of following a recipe in the past, I hope these make-do days of late have shaken you free. And I promise that Molly Baz has your back.

The writer, recipe developer and former fixture of Bon Appétit's YouTube channel has now channeled her energetic, rooting-for-you persona into her debut cookbook. "Cook This Book" is, yes, full of recipes — recipes for delicious-sounding things like Chorizo & Chickpea Carbonara and Skirt Steak with Red Chimichurri. But it's also reassuringly packed with information about the principles of great flavor and instructions on technique. Ingredients are arranged in the order you'd shop for them or find them in your kitchen — dairy with dairy, produce with produce — so you're not exhausted before you even start cooking. And there are QR codes interspersed throughout the book for video tutorials on how to confidently use ingredients and tools.

"I felt uniquely positioned to understand the limitations and thresholds and shortcomings of home cooks," Baz says, "because I've spent so much of my career thinking about other cooks and thinking about the novice cook. That's what my job at Bon Appétit was — it was all about accessibility. The purpose of this book was to make it as easy and stress-free as possible for those people for whom I know cooking is overwhelming. There's a lot of reasons to say, 'You know what? I'm just not going to do it tonight.' The way I structured my recipes was all in the service of eliminating any extra chaos."

"You'll see in the recipes that they appear on the page actually a lot longer than you might expect, given how simple they are," she says. "That's because I really spent the time to hold the reader's hand, and I tried to pack the recipes with as much background information and context as possible so that, as I'm asking someone to take a step in the kitchen — no matter what that is — I'm explaining to them at the same time why I've asked them to do that. If I don't explain why, then they're just a bunch of random tasks that aren't linked together."

"Cook This Book" is a book that answers not only the how of cooking but also the why. While it makes me want to devote myself full time to making every single page, it was the recipe involving my favorite standby — the versatile rotisserie chicken — that won my heart first.

"The idea behind this," says Baz, "was that cabbage is a vegetable that you can keep in your fridge for a month. Rotisserie chicken or leftover chicken is something that's always in my fridge or easy to come by. I thought about a quick dinner salad that doesn't require a lot of prep that you can always have on hand and then built it out from there. And the corn nuts come in, and they're basically just an alt crouton."

With no alt croutons to be had, however, I've made my version of Baz's Napa cabbage salad with shredded chicken, Cotija & Corn Nuts a little differently. I tone down the spiciness for my daughter's palate, and I use red cabbage instead of the softer Napa version. It's still sensational — hearty and rich and crunchy as hell — and just right for a night when you don't want to turn on a single appliance. I can't imagine following this salad with anything other than fruity popsicles.

Extra credit: If you're up for it, you can make chicken skin cracklings for an extra crunchy-fatty-salty element. While you're shredding the chicken, preheat the oven to 350. Remove strips of skin as you go along, and put them, flattened out and fat side down, on a cookie sheet lined with parchment. Sprinkle with salt and pepper, and bake about 15 minutes, until crisp. Crumble over your salad immediately before serving.