Why bust out a stand mixer and preheat an oven to bake? The best dessert takes its cues from the grilled cheese 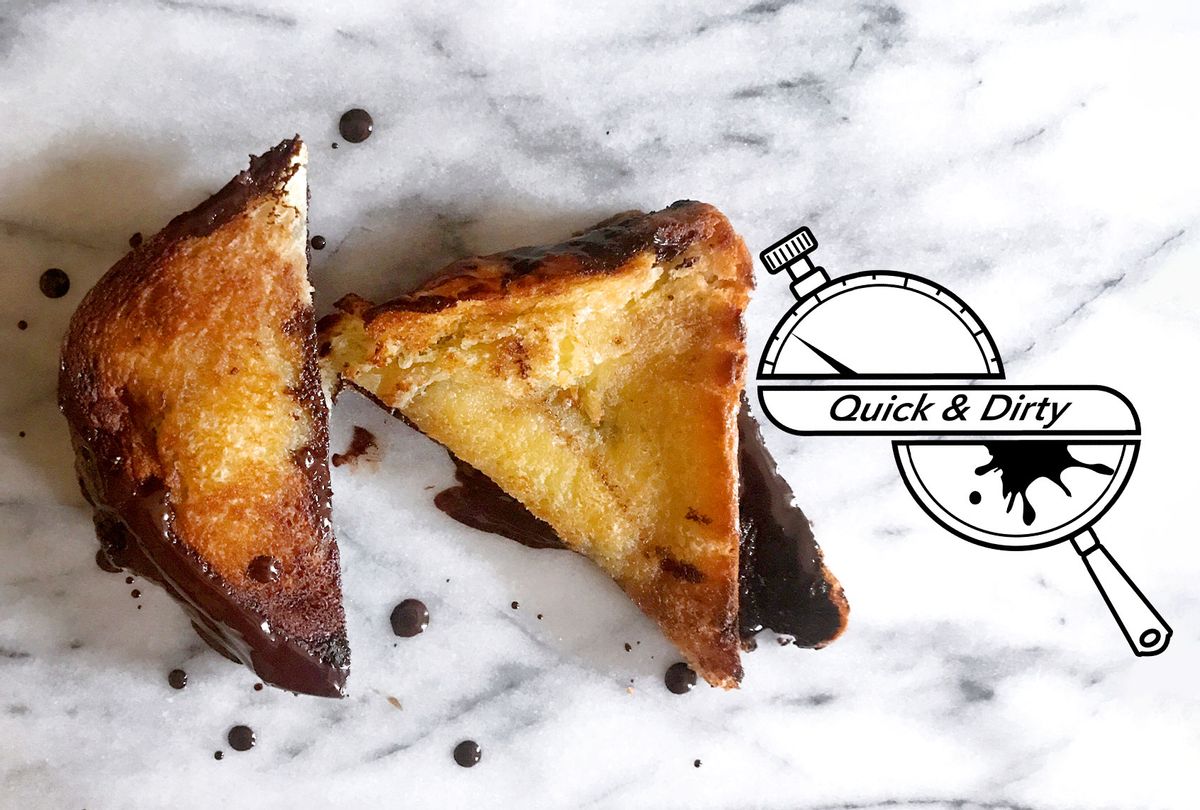 Why aren't we putting chocolate on bread all the time? That's the question I keep returning to as of late.

It's a dream that took hold when I went to Paris as a teen. At the time, I was staying with a French family who dazzled me with their sophistication. They drank wine with lunch, and for breakfast, they slathered Nutella on baguettes. I was blown away. They had a jar! Of chocolate! On their kitchen table! Suddenly, the Count Chocula I'd previously considered the apex of morning luxury seemed hopelessly pedestrian.

A few years later, I went to visit a friend in Rome. On my first morning in the Eternal City, I watched, agog, as her roommate casually grated a block of dark chocolate over a piece of buttered toast. As far as I was concerned, this woman might as well have been doing close up magic. What was this sorcery?

RELATED: The viral feta pasta dish everyone's raving about is even better without pasta

I'll always be a person who makes cookies and cakes and brownies. But when that pure desire for chocolate and carbs hits, why make things complicated? Why preheat an oven? Why bust out a stand mixer? Instead, why not just be Continental and rustle up a chocolate sandwich? Moreover, why not make the best chocolate sandwich in the world?

I first discovered pastry chef and City Bakery founder Maruy Rubin's version of the dish several years ago through a New York Times recipe. In truth, it wasn't so much of a recipe as a suggestion — grilled cheese, but make it chocolate!

The end result is timeless, but when I spoke to Rubin recently, I noted that this comfort food seemed particularly suited to the moment. Rubin, whose current project is The Wonderbon Chocolate Co., concurred.

"It's a pitch-perfect pandemic food," he said. "It's super simple and approachable. That is not like making a chocolate tart infused with Ethiopian coffee beans. It's fun. It's delicious. It's family-friendly."

What's your go-to easiest recipe? Tell us below in the comments!

The grilled chocolate sandwich is the best sort of food — the kind that works at any time of day. It makes a luscious breakfast and a loose, chocolate fondue-ish dessert. I've made it for lunch, because I'm a grown woman who can eat chocolate for lunch like a European — and it's sublime. If you want a light bite, you can slice it in half to share, but don't expect that kind of generosity from me.

"When I was learning to bake, the difficulty factor of recipes looked like climbing a big mountain," Rubin said. "Once I learned to bake, I thought, 'Why does that recipe seem so daunting when it's really not?' I've always thought there was a sort of tyranny of recipe writers, who in some quiet room someplace far away decided to make things just a little more complicated or intimidating than they need to be."

This, on the other hand, "should be complete freedom," he continued. "This should be one, two, three, throw it together. Look at that — done, ready to go, let's eat. That's it — and it smells great."

But how do you know you've made it the right way? As it turns out, the answer's easy.

"The very specific comment this should elicit is, 'Oh my God, why have I never had one of these before?'" Rubin said.

Serves 1 (Or 2 if you're magnanimous)

More Quick & Dirty: Have you read the debut column?