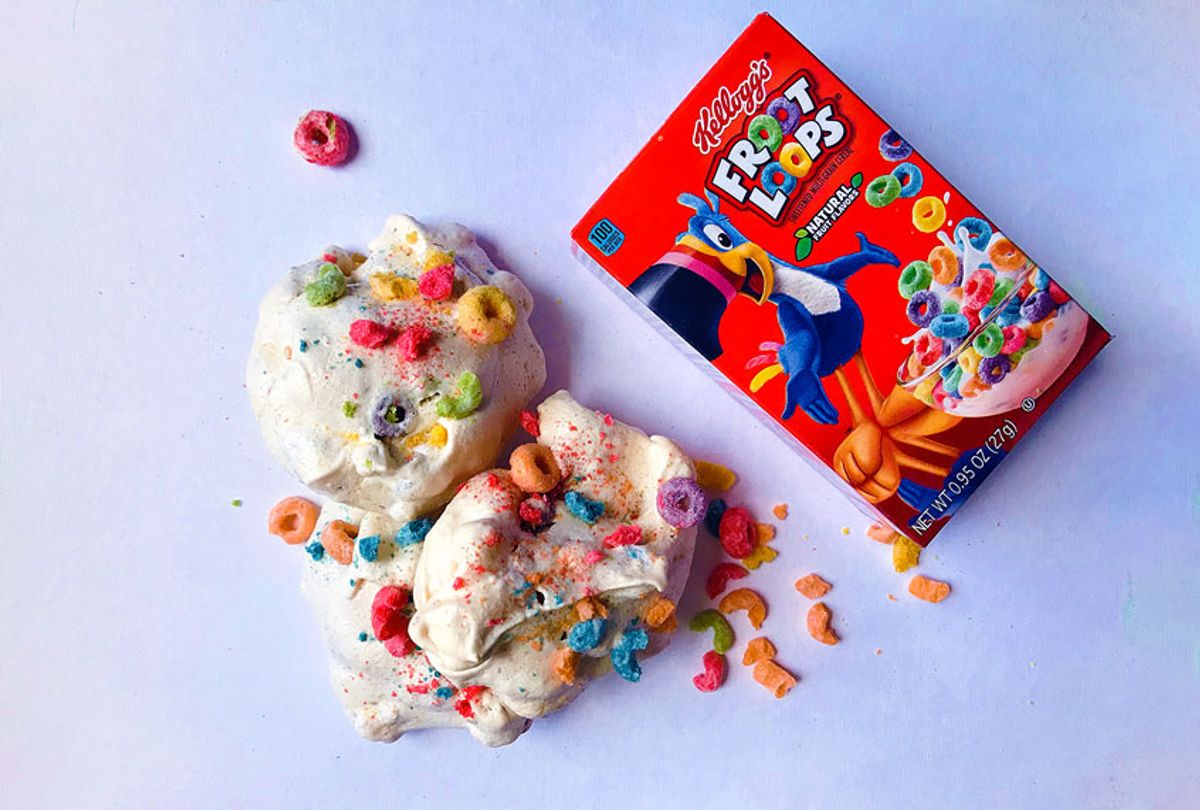 My freezer is really stressing me out lately. I know this is a luxury problem to have. As the pandemic has worn on here in New York, supermarket shelves have been picked clean, and grocery delivery has often been damn near impossible.

To have a well-stocked larder is a privilege I never take for granted. But as my family and I have adjusted to our current lifestyle of four people eating three home meals (plus snacks!) a day, the composition of our food supply has shifted. My freezer contains its usual staples: Irish butter, pie dough, yeast, a half portion of meatballs from a big batch I prepped weeks ago.

But now there's an increasingly overwhelming selection of odds and ends delegated to the "I'll deal with you later" pile. A chicken carcass and vegetable peels for stock. A jammy reduction of rhubarb stockpiled from its all too brief season. A pesto made of carrot tops. And egg whites. Oh, so many egg whites — the detritus of my dystopian custard baking.

Egg yolks are Kim Kardashian. Whites are Rob. Sure, they're technically in the same family, but who's the star here? Egg whites evoke dismal diet plate omelettes and "light" desserts and distressing looking cocktails. I lived most of my life considering whites at best a decent supporting player in chocolate mousse and at worst the bland fortress around the most precious part of a fried egg sandwich. Then I saw a photograph that rocked my world: a tumble of billowy white clouds dusted in green pistachios.

Yotam Ottolenghi had already created a cultishly adored London outpost of mind-blowing, Middle Eastern-inspired dishes and desserts when he and his collaborators began cranking out bestselling cookbooks over a decade ago. It was those drool-worthy books that truly helped create Instagram's food photography aesthetic — that chocolate babka from "Jerusalem" was born for social media — and made sumac the turmeric of the mid oughts. But it was the meringues that really made everybody lose their minds.

The Ottolenghi meringue is not the sad supermarket confection your grandmother keeps in a kitchen drawer that makes you go, "But why, Nana?" It is not some star shaped block of dust. It's Ottolenghi's most famous creation, oversized and uninhibited, more like a small pavlova than some dinky cookie. I've visited London a few times in the past decade, and every time, I visit Ottolenghi every single day. I try to eat my way through the entire menu, but with special attention to the meringues.

At home, however, I am a not a meticulous baker. The often involved Ottolenghi techniques, driven by the genius Helen Goh, are not going to happen. Instead, I want to make a treat that resembles something I might nibble in a chic English shop but at the same time appeals to my need for simplicity. Enter, surprisingly, Milk Bar.

I'm obsessed with Christina Tosi's groundbreaking dessert shops, but its treats are often tricky to reproduce at home. They are undeniably fantastic, though if you don't have acetate, corn powder and glucose on hand, you may not be able to just wander in to the kitchen to whip up a batch of cookies. But when I went searching for an easy meringue recipe, it was a Milk Bar one that leapt out at me. It had a blessedly minimalist ingredient list, and it came with a sassy infusion of a Tosi trademark — breakfast cereal.

To some, I'm sure, cereal may seem like a flourish of pastry chef irony — taking a classic European treat and giving it some supermarket scruff. But I suspect I am not alone in having a near primal association of actual brand-name cereal with childhood aspiration. I never went hungry in my home, but I also certainly understood that toast and oatmeal were everyday food, and Lucky Charms were for very special occasions.

And the Fun Pak? Individually wrapped boxes of your very own portions of cereal? When I was seven, this to me was what I imagined true wealth must be. Even now, I have in my kitchen reserves of saffron and vanilla beans, yet I feel like I'm really splurging when I buy Cheerios.

So this week, my frugal side reached into the freezer for some leftover egg whites, and my baller side purchased, for possibly the first time in my life, a Kellogg's Fun Pak. Soon, I was spooning fluffy, Froot Loops-flecked dollops onto a baking sheet and leaving them alone in the oven for the better part of an afternoon. It was effortless. What emerged was both beautiful and whimsical; my daughters pounced on the tray like they hadn't been fed in a week.

Because of their size, these meringues aren't dried out or powdery. Instead, they're alluringly complex — marshmallowy soft inside and shatteringly crisp outside. Yes, these babies are very, very sweet. Served with some tart fruit and a generous glug of cream, they'd be phenomenal. But they're delightful all on their own. I think next time I'll try them with crushed potato chips. And I might wind up having to make space in the freezer for some leftover yolks.