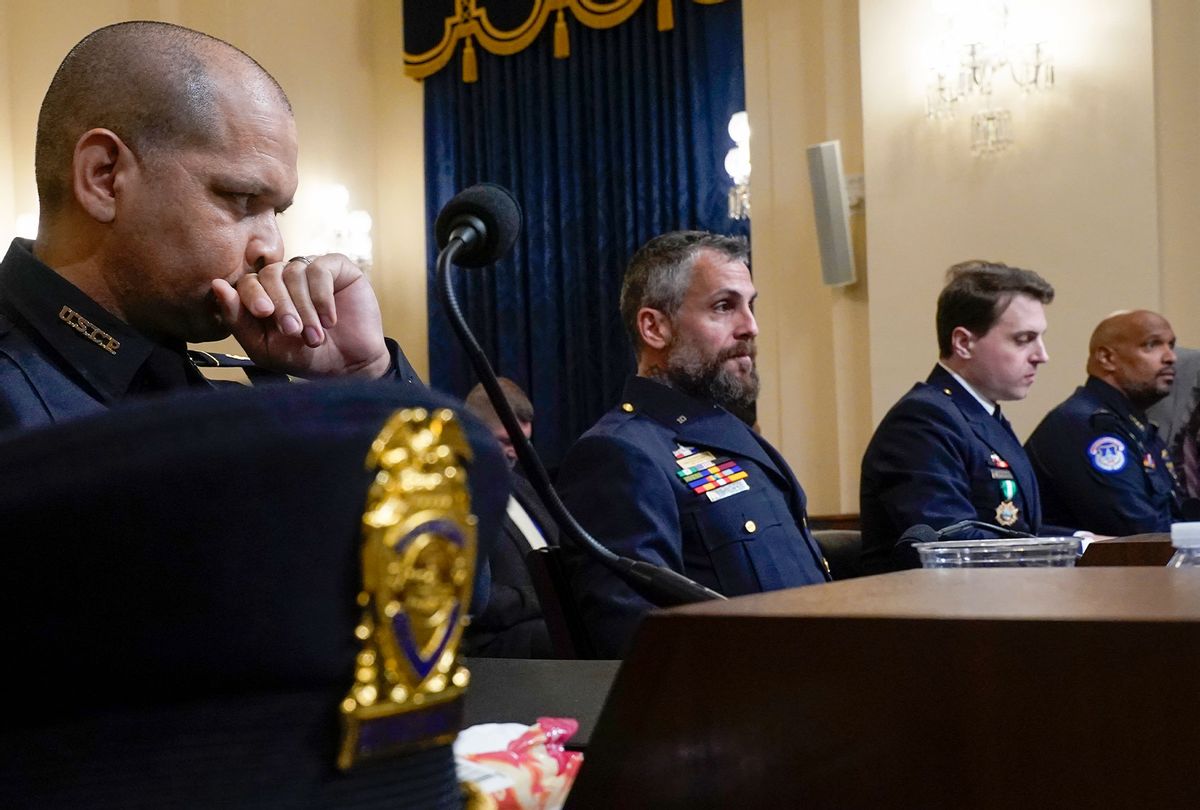 U.S. Capitol Police Sgt. Aquilino Gonell, Washington Metropolitan Police Department officer Michael Fanone, Washington Metropolitan Police Department officer Daniel Hodges and U.S. Capitol Police Sgt. Harry Dunn arrive to testify before the House Select Committee investigating the January 6 attack on the U.S. Capitol on July 27, 2021 at the Cannon House Office Building in Washington, DC. Members of law enforcement testified about the attack by supporters of former President Donald Trump on the U.S. Capitol. According to authorities, about 140 police officers were injured when they were trampled, had objects thrown at them, and sprayed with chemical irritants during the insurrection. (Andrew Harnik-Pool/Getty Images)
--

Earlier this month, Speaker of the House Nancy Pelosi, D-Calif., made the entirely sensible decision that the select committee to investigate the insurrection of January 6 should not include pro-insurrectionists. So she declined two nominations made by House Minority Leader Kevin McCarthy, R-Calif., of Rep. Jim Jordan of Ohio and Rep. Jim Banks of Indiana, two Republicans who did not even bother to hide the fact that they planned to sabotage the important work of the committee. McCarthy, who has for months resisted this effort to investigate the attack that targeted members of Congress, including himself, responded by feigning outrage that Pelosi was denying him his god-given right to make a mockery of the committee and pulled all of his nominees.

McCarthy's tantrum initially worked. Pelosi's "no assclowns" rule, reasonable to any person whose basic sense of decency hasn't been hobbled by years of hack punditry, actually angered a number of people in the press. Most notable among them was the famously well-heeled hack of the Beltway press Chris Cilizza of CNN, who wrote a smarmy piece headlined "Nancy Pelosi just doomed the already tiny chances of the 1/6 committee actually mattering." Never mind, of course, that it was McCarthy who was playing games. Republicans are never treated by the Cilizzas of political punditry as having autonomy, responsibility, or culpability for their actions. Cilizza's terminal case of "bipartisan brain" convinced him that what an investigation into a very real and violent attempted coup needs is a bunch of saboteurs running the show.

On Tuesday, we had the first hearing of what will hopefully be many into the events of January 6. Four police officers, two from the Capitol Police and two from the D.C. Metropolitan police, offered bracing and frequently heart-breaking testimony about what it was like to spend hours fighting both for their lives and to keep members of Congress safe from the rampaging mob intent on overthrowing democracy.

"I was electrocuted again and again and again with a Taser," D.C. police officer Michael Fanone, who suffered a heart attack and a traumatic brain injury from the attack, testified. "I'm sure I was screaming, but I don't think I could even hear my own voice."

Capitol police officer Harry Dunn spoke movingly about the racist abuse he received from the rioters, who called him the N-word repeatedly. He testified about sobbing after the attack and asking, "Is this America?"

The proceedings did not, in fact, lack gravitas due to the lack of a coatless Rep. Jordan rolling up his sleeves and screaming incomprehensible conspiracy theories about "antifa" at the officers. The day would have not have been improved by having McCarthy's other saboteurs insult the officers or imply that they were lying under oath. No one's life was negatively affected by denying Republicans an opportunity to retraumatize these four men, who were incredibly brave to step forward, despite the ongoing threats from the followers of the fascist orange gaslighter the GOP is still in the thrall of.

The notion that the committee is not bipartisan, of course, is a joke. There are two Republicans on the committee — Rep. Liz Cheney of Wyoming and Rep. Adam Kinzinger of Illinois — who were chosen because they met the baseline requirement of believing fascist insurrections are very bad. The idea that these two don't "count" is inseparable from believing that to be a Republican necessarily means supporting Trump and his insurrection. And neither of them, who are both incredibly conservative despite their anti-insurrection views, are conceding that as of yet.

But ultimately, it doesn't matter how "bipartisan" the committee is. As Tuesday's hearing showed, the facts are sturdy enough to stand up even under the relentless partisanship of Republicans who would rather support a seditious ex-president than admit that Democrats are right about something. The videos showing the violence, the righteous anger of the officers who are sick of being told they didn't experience what they clearly went through, and the raw emotions as these men spoke of the terrors of that day: It all speaks for itself.

That people who continue to support Trump after January 6 should be ashamed of themselves is a given. But so should any journalist or pundit who thinks that "bipartisanship" matters more than the blunt facts of what happened on January 6 and who is responsible. (That would be Trump.) And it's clear that the committee does not need to cater to the Beltway media's fetish for bipartisanship to do its job. All the need to do is continue to uncover the ugly truth about the attack on our democracy.