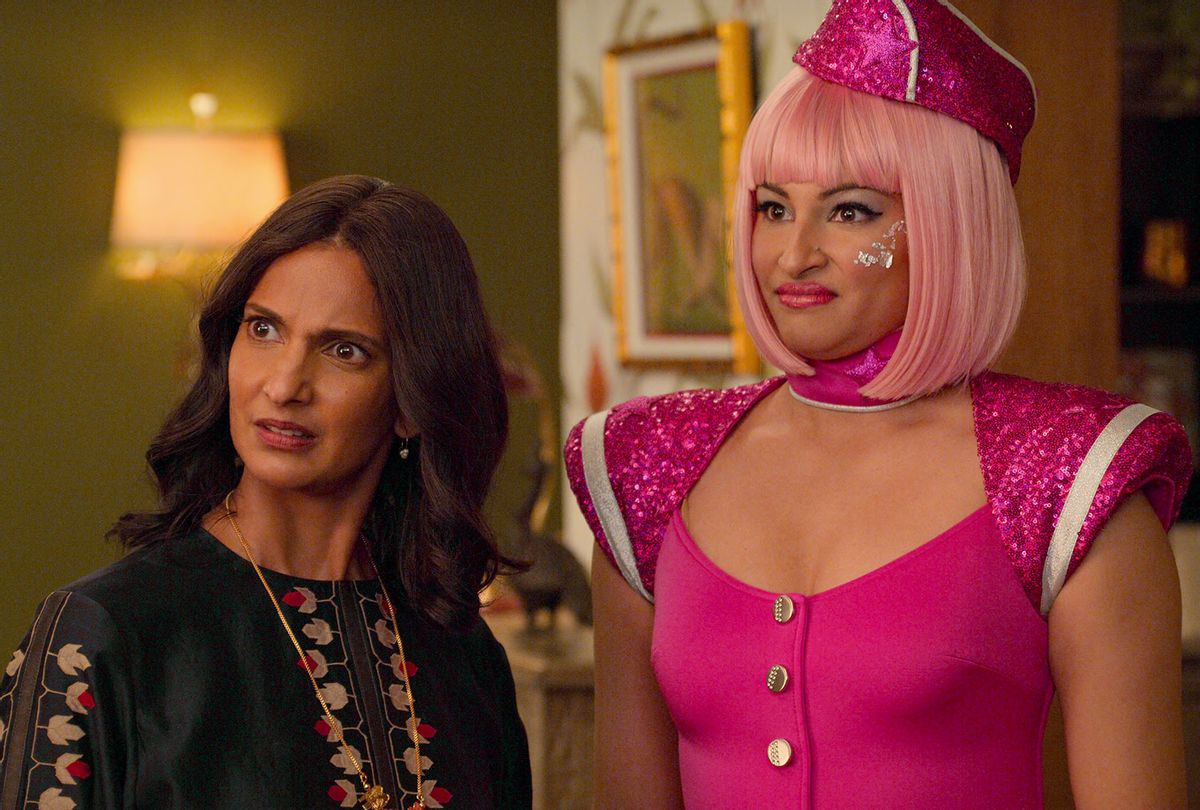 Poorna Jagannathan and Richa Moorjani in "Never Have I Ever" (Isabella B. Vosmikova/Netflix)
--

On Netflix's "Never Have I Ever," the latest and arguably greatest Mindy Kaling project that follows the equal-parts hilarious and devastating story of a South Asian-American family, Devi Vishwakumar (Maitreyi Ramakrishnan) is as charismatic a protagonist as we've ever seen on a teen comedy. But while Devi's high school love triangle hijinks take center stage, the show's second season also delves deeper into the lives of three other South Asian characters as they go on journeys of their own.

Devi's mother Nalini (Poorna Jagannathan) is finding herself identifying more as Indian American than just Indian and also starts to see a romantic life for herself after the loss of her husband. Meanwhile, Devi's cousin Kamala (Richa Moorjani) is navigating the sexist politics of her new research position while maintaining her relationship with her overseas boyfriend. Even new student Aneesa (Megan Suri) is revealed to have her own issues and isn't just the cool interloper who's better at being Indian than Devi.

Despite shared aspects of their heritage, the series shows that no two South Asian women's stories are the same, contrary to what the long history of stories featuring tokenized characters of color might have led us to believe. Salon spoke to Moorjani and the series writers about building out the more nuanced experiences of these characters in Season 2.

"Everyone thinks Asian women will take all kinds of crap"

This season, we get a deeper understanding of Kamala's character, a PhD student at Caltech, as she's forced to navigate workplace sexism in her lab. As a woman she's subject to grunt work, awful overtime hours unlike her male peers and also denied credit for her invaluable work. All of this is infuriating to watch, but Moorjani says it was "so exciting" to depict these everyday realities and Kamala's journey to stand up for herself.

"Discrimination and sexism are still such a strong problem in the STEM field, especially for women and especially for women of color," she said. "A name being taken off a paper is unfortunately a very common thing, and this goes back all the way to Marie Curie, when her husband had to take credit for her Nobel Prize because she was a woman. It's not something we see very often represented in TV or film."

Perhaps the most memorable way that Kamala is forced to conform is being pressured to wear a sexualized flight attendant costume inspired by "The Fifth Element" to join male cosplaying peers at a sci-fi convention. Moorjani laughs recalling that scene and notes that it's "both funny and cringe," and is personally familiar to her.

"I've never had to dress up like a sexualized video game character before, but I've had to do similar things even in my own industry when I was a 'struggling artist,' like go to events where I had to dress up like an 'atmospheric Bollywood dancer,' and had to dress in very sexualized, exoticized Bollywood costumes, and stand around like a piece of furniture," she recounted. "I know what it feels like to do something that's so cringe-worthy, but you feel like you have to do it to fit in, or impress, or get a job."

Throughout "Never Have I Ever," Devi is often criticized for and forced to confront her anger issues that causes her to act out in brash and dramatic fashion. This is in contrast to Kamala, who was introduced as the stereotypical perfect cousin, who not only is even-tempered and hardworking but even started dating a nice Indian man, Prashant (Rushi Kota), who was chosen for her.

Yet it's Devi's anger and fire that Kamala turns to when she tells her cousin about the sexism she's faced in her lab. This manifest in crucial advice.

"Everyone thinks Asian women will take all kinds of crap, like, bow, or hand them a cup of tea or some s**t. You can't let them," Devi says, offering a rare pearl of wisdom.

Kamala follows her cousin's advice by taking down her chief antagonist and even getting her name added to the research. While it's a joy to see, it's bittersweet, as we witness how the advice of Prashant – who told her to fit in with the sexist treatment versus figthing it – has sowed doubt about their relationship for Kamala.

"That little advice Devi gives to Kamala is actually extremely profound, because these are messages South Asian and all women of color have received throughout our lives, to just keep our heads down, like Prashant literally says to Kamala, 'Just keep your head down and keep your chin up and don't let them think you're difficult,' he says," Moorjani said.

"It's because of these messages we've all received that a lot of us tend to not stand up for ourselves and put up with discrimination and sexism and taken no for an answer," she added. "It's something I've struggled with personally in my life, so this was something that was really cathartic for me."

It's an awakening for Kamala, whose previously assumed perfection made Devi's struggles as a child of immigrants look messy and ungrateful. But those paying attention will realize that Kamala was capable of rebellion and passion all along, especialy when it comes to taking risks in her romantic life, inspired by the bold overtures of "Riverdale." By the end of the season, Kamala abandons a special dinner in which it's assumed that Prashant will propose to her and instead hangs out with Devi's cool teacher Mr. Kulkarni (Utkarsh Ambudkar).

"Never Have I Ever" writer Amina Munir, said of Kamala's arc this season that we get a glimpse of "her growth and evolution with what she was willing to fight for, what compatibility means for her," as "someone who is a bit in between more traditional Eastern cultural values."

The internal and external conflicts Kamala faces this season are an honest depiction of those of many young people from immigrant families.

"It's something so many of us children of immigrants have had to deal with throughout our lives — wanting to explore and express our identity, but also being confused about our identities," Moorjani said. "We want to balance our modern, western way of life with our family and our culture and background. That can lead to a lot of cognitive dissonance, and be confusing and stressful. I know exactly how that feels, wanting to be your own person and pursue your dreams but at the same time make everyone around you happy."

There's no wrong way to be a South Asian woman

Meanwhile, Devi's mother Nalini is going through her own personal and professional journey. Dr. Chris Jackson, played by beloved rapper Common, begins as a rival of sorts to the recently widowed Nalini — only for the two to find solace in shared loss, and Nalini to discover an unexpected spark of romance with him.

"With Nalini, we've seen one side of her as a very protective, cautious, quite intense mother who has a lot of conflicting feelings around raising her child, and dealing with her grief, where I think this is just a really interesting color on Poorna," said Munir of Nalini's new romance. "I think we rarely see romantic plotlines for women of color who are over 30, in a way where it was really exciting and cool to write it, and see Poorna just handle it so gracefully."

Series co-creator Lang Fisher and an alum from previous Kaling-led projects says this tapestry of diverse experiences of South Asian female characters is particularly exciting as a departure from previous shows' tokenization of women of color. Gone are the days of one character of color, or one character from a marginalized community, representing everyone from their community in one singular, usually stereotyped storyline.

"Historically we're used to seeing a person of color be a sidekick, and at least on our show, we're trying to show that should never be the case," Fisher said. "We want all of our characters to be totally fleshed out, real human beings, with dreams and needs and desires, real stories behind them."

Nalini, Devi, and Kamala may be family, but they couldn't be more different in how their heritage shapes their lives. In Season 2, while Devi faces consequences for some of her more impulsive behaviors, we start to see change in the decision-making of her mother and cousin as they start to become less cautious and guarded in their own personal lives.

In their own ways, the women of the Vishwakumar family stand at crossroads by the end of the season. Devi appears to be at the brink of everything she thought she ever wanted – she's doing well in school and is dating her dream guy. Nalini may be open to love again. And Kamala stands up to workplace sexism, and leaves the future of her relationship with presumptive-fiancé Prashant on a cliffhanger.

Moorjani herself says she has no idea what the future holds for Kamala, but she's confident it "will be fun to explore, and to see Kamala make romantic and non-romantic decisions for herself without being pressured into anything." And she's confident the show will continue its flair for crafting comedy through the honest, everyday experiences and frustrations of women of color and young people.

"I've been amazed by how many things were written into the show that as I was like, 'That literally happened to me, or someone I know,' and just completely related to it," Moorjani said.

Both seasons of "Never Have I Ever" are streaming on Netflix.