From "Twilight" to "Never Have I Ever," here's what makes the greatest love triangles so potent 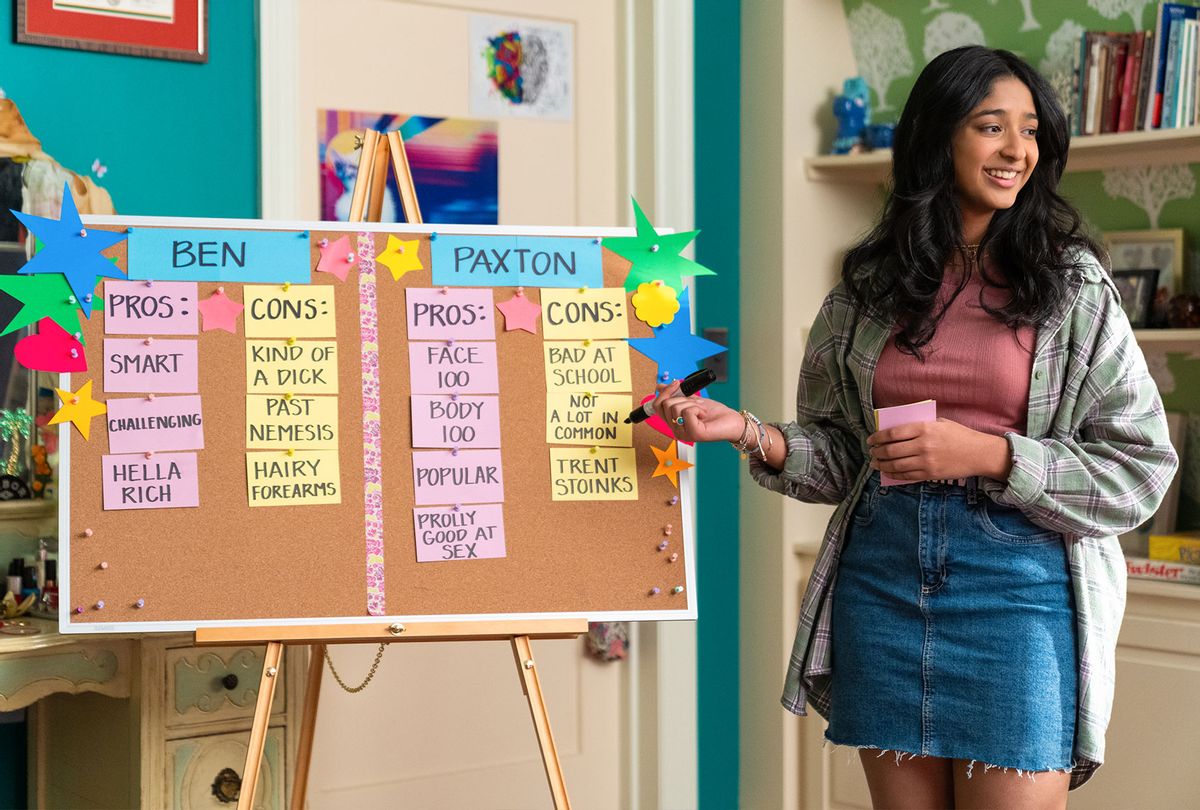 Maitreyi Ramakrishnan in "Never Have I Ever" (Isabella B. Vosmikova/Netflix)
--

Within the first minutes of the second season of Netflix's "Never Have I Ever," narrator John McEnroe sets the scene of a desperately relatable dating conundrum: "Devi lay in her bed pondering these two grand romantic gestures," he says. "Ben had broken the law, stolen his dad's car and risked his life to help her say good-bye to her dad. But Paxton had left her a voicemail. A voicemail!"

Among other new storylines and developments, the sophomore season of the Mindy Kaling-created teen dramedy "Never Have I Ever" explores the love triangle between Devi (Maitreyi Ramakrishnan), her nerd-rival Ben (Jaren Lewison), and high school heartthrob Paxton (Darren Barnet), as Devi goes from trying to date the two at the same time, to subsequently trying to mend her friendships with both of them after she's busted.

The love triangle has since sparked a passionate internet shipping war between fans who count themselves on Team Ben and those who identify as Team Paxton. What allows this triangle to rank among the greats is that it's well-balanced; there are clear reasons for Devi to be with either of her suitors, and her relationships with both are deeply relatable in their own ways.

In the beginning, Ben is more committed to Devi and more willing to make bold moves to be with her. But because of Paxton's popularity and Devi's intense physical attraction to him, the barest of minimum from him can seem more romantic than far bolder gestures from Ben. These dynamics gradually begin to change in the second season, as Paxton works on himself in surprising ways, and Ben pursues a relationship with a new girl.

Of course, Devi isn't the only onscreen protagonist to have ever been torn between two romantic interests. In the "Twilight" saga films, which recently started streaming on Netflix, Bella Swan (Kristen Stewart) is caught in what's arguably this generation's most famous and hotly contested love triangles, launching the epic feud between Team Edward and Team Jacob shippers. While the romance in "Never Have I Ever" is firmly grounded in high school suburbia and the one in "Twilight" is more supernatural – pitting the charms of a vampire against a werewolf – they still operate in similar ways.

Salon examines the dynamics of the greatest onscreen love triangles and what makes us care about them so passionately.

Safety and security vs. passion and intensity

One of the classic love triangle dynamics contrasts reliability with its perceived opposite. For the majority of the first two seasons of "Never Have I Ever," it's not hard to guess between Ben and Paxton who represents the safe choice versus the more exciting one. Ben "risked his life" for Devi, while Paxton merely called her and looked hot standing outside her house.

Also, as Devi briefly dates the two at the same time, Ben tells her point-blank that he's "all-in" and willing to date long-distance if she moves to India. In contrast, Paxton doesn't even call Devi his girlfriend, and offers no plan to address her then-impending move.

We've seen this dynamic time and again. In "Sex and the City," the '90s and 2000s sex romp following the romantic lives of four best friends in New York City, Carrie Bradshaw (Sarah Jessica Parker) is oft torn between the humble, steady Aidan Shaw (John Corbett), and non-committal, playboy financier, "Big" (Chris Noth). Aidan stays by Carrie's side through her infidelity and — let's be real — her generally grating, self-centered personality, and even proposes to her, but Carrie still chooses Big, who takes the duration of the show to tell Carrie she's "the one."

More recently, this tension between stability and passion is the driving conflict of Netflix's hit original series "Sex/Life." In the show, a confidant of suburban mother Billie (Sarah Shahi) literally tells her, "The person who gives you all that security can't be the same person who gives you the thrill, the risk, excitement, lust." That is . . . debatable, of course, but the quote is the perfect summary of the underlying turmoil of some of the most iconic love triangles in cinematic history.

It certainly applies to the "Twilight" saga, which sees werewolf Jacob (Taylor Lautner) constantly risk it all for Bella and perpetually offer a shoulder to cry on, in contrast with Edward's (Robert Pattinson) seemingly endless mysteries and family-slash-vampire drama.

And sure, all of these love triangles are incessantly dramatized and unrealistically portrayed by some of the most attractive people in the world — but that aside, the tension in this particular dynamic speaks to a fundamental aspect of temptation and desire in humanity. Who hasn't lusted for what they can't have, and shrugged off the attainable?

Should a person be attracted to someone who is similar to them, or someone whose personality is more complementary? On "Never Have I Ever," it's hard to imagine anyone more opposite academic overachiever Devi than Paxton, the hottest and most popular boy in school — and also a junior forced to retake several sophomore-level classes. In contrast, Ben and Devi share common nerd ground. He's been her academic rival since elementary school, and throughout their dynamic love-hate relationship, it's clear they absolutely relish competing at all of their many shared interests and favorite school subjects.

Different onscreen love triangles have had wildly different outcomes, but these outcomes often boil down to the philosophical question of whether opposites attract, or we're more likely to find love with those we have more in common with. Both sides have their benefits — there's nothing more exciting than being with someone who challenges you, and nothing more comforting than being with someone who totally understands you. But historically, most movies and shows have been Team Opposites Attract.

The jury is still out on the love triangle in "Never Have I Ever," and, of course, we're still waiting to see who Victor (Michael Cimino) chose at the end of Season 2 of "Love, Victor" between Rahim (Anthony Keyvan), a fellow newly out, queer boy of color, and Benji (George Sear), a long-time, out-and-proud, white gay teen with liberal parents. For both teen dramedies, we'll have to wait another season for highly anticipated answers – unless, of course, that question remains unresolved or recycled in some way to keep the tension alive.

Some of the most interesting and satisfying love triangles ultimately have less to do with the two rival suitors, and more to do with the inner conflicts of the person at the heart of the triangle. On "Never Have I Ever," Paxton seems to represent Devi's appearance-based aspirations at achieving a higher social status at her high school, and receiving validation that she's (pardon my language) "eff-able" after years of internalizing her friend group's nickname, "Uneffable Nerds (UN)."

It would be easy to dismiss her as a typical shallow teen — but there's a long history of internalized racism and self-loathing among those who don't meet and yet are subject to white supremacist beauty standards. Devi's desire for Paxton at first extends from her insecurity and desire to prove herself, despite how she has nothing to prove.

On the other hand, Devi's attraction to Ben seems to represent her acceptance and embracing of herself as the lovable nerd she is. The inner conflict Devi faces in choosing between Ben and Paxton at the beginning of Season 2 presents a strong case for "Team Devi" — those who just want to see Devi heal and thrive, which probably means working on herself and reflecting on what she truly wants, rather than spiraling into relationship drama. We arguably see this throughout the second season, and as she matures throughout the series, her needs – and therefore whom she ultimately picks – could also change.

Other onscreen love triangles have also heavily implied that the person at the center of the triangle would be better off choosing themselves, and shown how romantic conflicts are often manifestations of deeper inner conflicts. Some might say Robin on "How I Met Your Mother" should have chosen her bustling career as an international journalist and dog-mom over strapping in with indecisive man-children like Ted and Barney. On "Sex and the City," Carrie was arguably at her most tolerable when she was dating around or dropping the occasional pearl of wisdom, with neither Aidan nor Big. Meanwhile, it might have been more suitable for Nick Miller on "New Girl" to acquire a wallet before a serious relationship with an adult woman, and for Christian Grey to seek therapy for his trauma instead of marrying a recent college grad in "Fifty Shades."

Shipping wars and love triangles can feel tedious and juvenile at times, especially in an age of corny social media hashtags and "fan-cams." But they can also be wildly fun, and inspire deep self-reflection within each of us, about our innermost desires, the kinds of partners with whom we "ship" ourselves, and the character development we need to commit to as individuals before we find our "one true pair (OTP)."