When a new girl enters the school, the series explores the complexity of sharing space among women of color 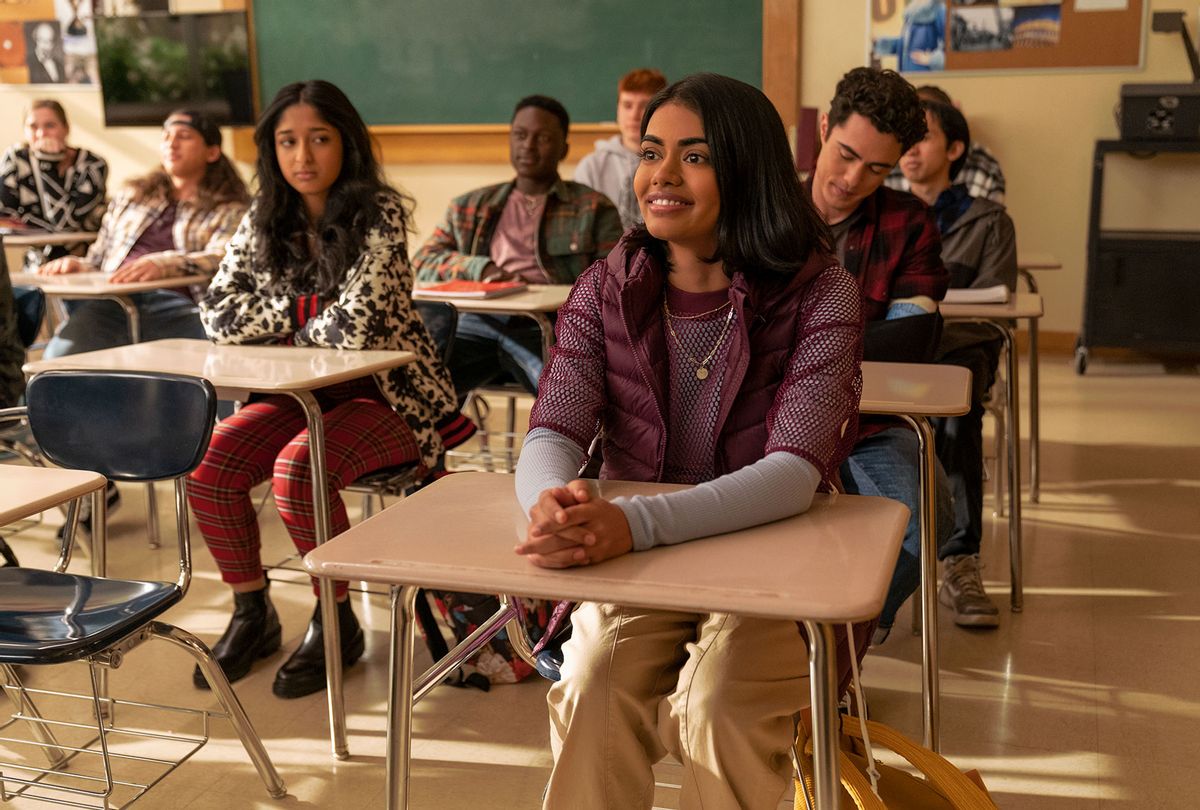 Maitreyi Ramakrishnan and Megan Sure in "Never Have I Ever" (Isabella B. Vosmikova/Netflix)
--

The second season of Mindy Kaling's beloved teen comedy series "Never Have I Ever" starts off with a bang, opening with a classic teenage love triangle that immediately steals the show. But a subtler, even more captivating storyline soon ensues, when a new girl named Aneesa (Megan Suri) transfers to Sherman Oaks High School. Aneesa is smart, athletic, fun, cool, and pretty much all the things that 15-year-old protagonist Devi (Maitreyi Ramakrishnan) aspires to be — and she also shares Devi's Indian heritage, becoming the only other Indian girl in their class.

As narrator-slash-retired-tennis-legend John McEnroe puts it, "Devi was in awe of this cool Indian teen. She had always assumed her unpopularity was because of racism, but this new kid was proving that Devi might just be objectively lame."

"Aneesa's character was a very fertile area for us to tap into talking about identity politics in a way that doesn't feel too forced or pushed, and discussing something I honestly haven't seen on TV too much before," said Amina Munir, a writer on the show and a South Asian woman herself.  "That is, like the internal battle when you see someone who you're envious of, and they also happen to be your same race."

Devi is immediately threatened by Aneesa's presence, which may surprise audiences who would have expected them to bond over their shared racial identity, in a school where few other people can relate to them. After all, this is exactly what Devi's mom expects when she hears about Aneesa and promptly forces Devi to invite her over for a sleepover.

The tension Devi feels actually makes sense, however, as she watches Aneesa befriend Devi's favorite (and the only Indian) teacher who once played favorites with Devi, effortlessly infiltrate the cool kids inner circle and excel in their shared orchestra class. At one point when a white history teacher accidentally calls Aneesa by Devi's name, one of their classmates says, "Aneesa's like Devi 2.0. . . . No offense, Devi 1.0."

There's always been an unspoken paradox of sorts for women, people of color and all marginalized identities, who are often the one, token member of their community in a number of settings. Being the only person who represents your community in any given space can be exhausting and lonely — yet, when other members of your community do join you in the space, their presence can feel like a threat, or competition, mostly because traditionally white, male spaces offer so few spots to anyone who's different from them.

We've seen echoes of this on "The Simpsons" when overachiever Lisa Simpson feels theatened by a new girl who is better at everything – school, the saxophone and even dioramas – that Lisa feels makes her unique. And in Kaling's other sitcom, "The Mindy Project," her gynecologist character attempts to distance herself from another Asian female candidate going up for the same job.

In the case of "Never Have I Ever," Devi immediately tries to downgrade Aneesa's social clout with insults and gossip, beginning with her humorously hypocritical comment, "I get sort of a self-hating Indian vibe from [Aneesa]. I bet she doesn't have any Indian friends." Devi, of course, has none herself.

Munir was able to relate to the storyline involving tension between Devi and Aneesa on a personal level. "For all the racial diversity we're seeing in highly coveted spaces, we're still very tokenized," she said. "Really, are you seeing multiple women of color occupying power in the same office? So many people in charge of hiring think to themselves, 'We've got one, great.' You're making it appear to people of different minority groups that there is only room for one."

That's exactly what Devi thinks — that there's only room for her. She's long had conflicting feelings about her Indian-ness, and in Season 1 we see her feeling embarrassed by it during a Ganesh Puja celebtation, while also being defensive when others perceive her as not Indian enough. That's because whatever she may personally feel about her Indian heritage, it's always been a defining and, in her school, unique part of her identity. It's also a part of her identity she felt she could comfortably blame for her lacking popularity — what's her excuse when Aneesa shows up and almost immediately charms everyone in their class, including Devi's love interest Ben (Jaren Lewison)?

It's not until the aforementioned sleepover, during which they sneak out and Devi gets her nose pierced, that she begin to feel trust and kinship with Aneesa. The next morning when Devi's mother lectures her daughter about the piercing that was decidedly not parent-approved, Aneesa covers for her and claims Devi got her nose pierced to feel closer to her Indian heritage. It's only because they share this cultural background that she's able to effectively defuse the situation.

But that goodwill evaporates quickly once Devi catches wind of romance brewing between Aneesa and Ben, and "pulls a Devi" by selfishly sabotaging the romance. Despite a rough start, Devi and Aneesa eventually find their footing, but the tension — mostly instigated by Devi early in their relationship — between them is one of the most compelling arcs of the season.

"It's a storyline that was very interesting to Mindy in particular, that feeling that there can only be one, which I think many women and marginalized people feel a lot of times, in school settings but also in work settings," Lang Fisher, showrunner and a writer for "Never Have I Ever," told Salon. "It's like, 'Oh no, if there's only one of us then someone else shows up, what does it mean for me?'"

According to Fisher, the added element of Aneesa's presence on the first comedy centering an Indian American teenager, is meant to "send the message, almost in a meta way, that there shouldn't only be one."

"Aneesa and Devi are both Indian but they couldn't be more different. Aneesa is Muslim, she's a jock, she's struggling with a pretty hard eating disorder. Her insecurities and her troubles are very different than Devi's," she said. "We wanted to show you can't have one person represent everything from a culture or ethnicity, and it's good to have multiple people of color particularly in a show showing different types of people."

The second season of "Never Have I Ever" is rife with thoughtful storylines like this one approaching the complexities of youth, immigrant, South Asian and queer identities, as well as grief and trauma. It's one of many shows that reflect the diversity and values of high schoolers today.

Gen-Z may indeed be more progressive than its predecessors — but that doesn't mean its members can't be just as messy and problematic, and wonderfully cheesy and romantic. Fisher says she grew up watching all the classic John Hughes movies, stories of uncomplicated fun and youth. "Those were incredibly white and have zero gay characters," she said, "but the feeling you got when you watched them, the angst of the teens and the romance and all that stuff — we hope [in 'Never Have I Ever'] we modernize that for a new audience."

On "Never Have I Ever," Lee Rodriguez plays Fabiola, one of Devi's two best friends whose specialty is robotics and is also a queer girl of color. As with Hulu's "Love, Victor" her narrative encompasses more than the clichéd angst-ridden coming out story and instead is an ongoing exploration of her identity in all its facets. The show's serious regard for its young subjects and audience is apparent in how thoroughly these stories are told with empathy, depth and nuance.

"No one on the staff is in high school," said Munir. "But what I appreciate most in stories about younger people is treating those characters with respect, because so often I find when I watch high school shows or media that features high schoolers, there is such an adult judgment toward some of the kids, that ignores how young people have such strong emotions and such high stakes at that age. So, why wouldn't you treat those stakes as seriously as they feel?

"When you're that young, everything feels life and death, and it's a very fun kind of genre to write, because there's so much there, all these raw emotions people are dealing with, and it translates so beautifully to screen."

It would have been easy for the show to write off the rivalry Devi imagines between herself and Aneesa as more of the same, petty teen drama. "Never Have I Ever" doesn't shy from the fact that Devi is, in fact, a petty teen — but it also makes it clear there are serious, interesting and relatable dynamics that compel her to feel this way toward the new girl.

At the end of the day, the foremost goal of the writers and creators of "Never Have I Ever" is to give audiences a fun experience, which is fun not despite but because it shows the fullness of the lives of a diverse group of young people. "What we're trying to achieve is a show that isn't preaching at you or trying to tell you how to feel about anything," Fisher said. "We're just trying to show an Indian American teen who still has fun, juicy storylines about boys, has best friends, and we want it to also just be really fun."

"Never Have I Ever" Season 2 is now streaming on Netflix.