"Never Have I Ever" returns smarter, funnier and at the mercy of its hormones more than ever 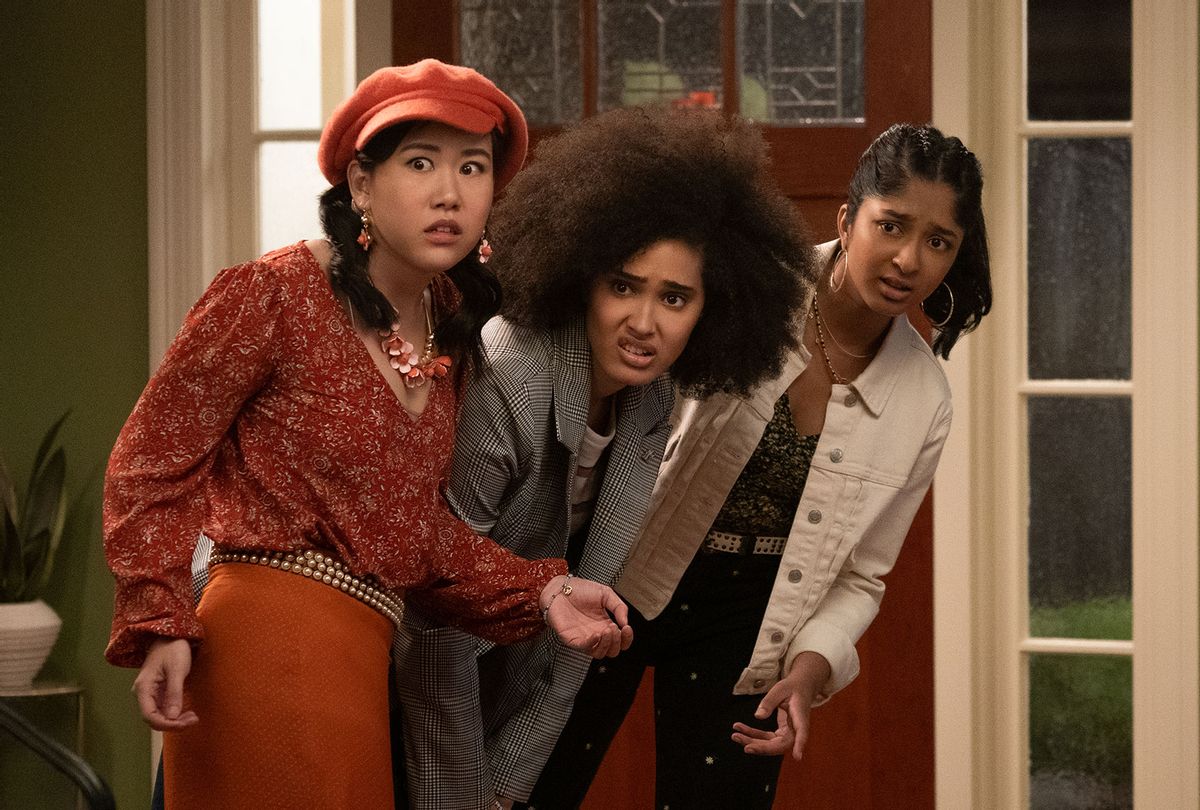 Ramona Young, Lee Rodriguez and Maitreyi Ramakrishnan in "Never Have I Ever" (Isabella B. Vosmikova/Netflix)
--

"Never Have I Have Ever" is for the girls who never saw themselves in any John Hughes movie. We know the filmmaker didn't overlook our existence on purpose. "Sixteen Candles," "Pretty in Pink" and "The Breakfast Club" were made to be universally appealing. They are, in the way that most TV shows and movies about American teens tend to be – meaning, they present whiteness as the default for Americanness and expect non-white teenagers to relate.

Mindy Kaling is an obvious John Hughes fan, and that affection shows up in the all-American misadventures of Devi Vishwakumar (Maitreyi Ramakrishnan) an outspoken ultra-nerd operating from the same set of unrealistic expectations about dating and sex whirling inside the brains of all the virginal uncool.

Like a lot of kids her age, Devi is at the mercy of her hormones. She's overachieving, but also moody and prone to say and do things in the moment that she regrets later. Part of the reason for this is to avoid grieving the death of the father who doted upon her, Mohan (Sendhil Ramamurthy). But she's also a little bit crazy in lust with Paxton Hall-Yoshida (Darren Barnet) the hottest boy at Sherman Oaks High. Naturally that leads her to fall for her one-time nemesis Ben Gross (Jaren Lewison), with whom she makes out mere minutes after spreading her father's ashes in the ocean.

The second season of the show picks up right at that moment, which means Devi hasn't engaged in very much emotional growth. She's still entertainingly self-centered, and that's fantastic because the show wouldn't work half as well if she leveled out.

Her new round of selfishness informs a cascade of bad decisions that come after her lip lock with Ben, touched off by Paxton realizing that Devi could be more to him that the brainy friend who helps him with his homework. Imagine John McEnroe's color commentary on this dream scenario of two amorous bees circling a socially insecure wallflower. Actually, you don' have to imagine that, since McEnroe returns in the new season.

"Never Have I Ever," already an outstanding comedy, manages to be even better in its sophomore run. Everything about the show is more confident – the physical comedy is goofier, Devi's dingbat logic is more outlandish, and McEnroe's narration easily flows with the action. It's also among the most naturalistic depictions of an inclusive high school student body on television that neither strains to call attention to that, nor ignores its characters' cultural backgrounds.

Devi's life is a starting point for this approach. Kaling and showrunner Lang Fisher never downplay what it's like for as a child of Indian immigrants to grow up in a place where few people look like them, eat their food or participate in their holiday celebrations. Devi actually navigates a mixture of emotions about it during the first season, confronting it anew when another Indian teenager, Aneesa (Megan Suri) transfers to her high school and is demonstrably cooler and fits in better than she does.

Aneesa's kindness and sincerity also take Devi by surprise, to the point that she isn't sure what to do with her. Their tender new friendship is one of this new season's stronger storylines in the way that it tests our affection for our girl, even as she's being pulled in other directions.

Most of Devi's hijinks are the product of the uncertainty constantly shadowing her – she still has a deep well of unprocessed grief to empty that her therapist (Niecy Nash) asks her to take on more directly this season as her bad choices pile up and bury Devi. And a lot of them splash onto her pals Fabiola (Lee Rodriguez) and Eleanor (Ramona Young), each of whom is also figuring out who they are and what they want, too.

The second season's real strength is its maturation into a heartfelt multigenerational romantic comedy, further developing Dev's mother Nalini (Poorna Jagannathan) and cousin Kamala (Richa Moorjani)  and their stories. Kamala's absolute lack of concern or awareness of her hotness is a recurring comedy stream for Devi, but our expanded view into Nalini's interiority is particularly refreshing.

Until now, most of what we know about about Devi's mother is filtered through the teen's point of view, painting her as little more than disapproving and hard driving. These new episodes also remind us that Nalini is mourning Mohan's loss and dealing with it in the only way she knows how, which is to continue managing her dermatology practice and contemplate returning to India.

Heretofore Nalini operates from a place of certainty, with every move dictated by tradition. But just as Kamala starts to question the path her family and culture lay out for her, embracing her anger and agency when she's subjected to a sexist workplace, so does Nalini. Additional outside perspective from a flashier fellow dermatologist who works in the same building as Nalini, Dr. Chris Jackson (Common) invites Jagannathan to play with her character's vulnerability and allow her to also desire more than the world expects of her.

As ever "Never Have I Ever" is firmly Ramakrishnan's show, and this alone is reason enough to treasure it. The actor's sweet grin and sensitive portrayal of clumsy insecurity make us invest in seeing her win, especially in the cases when that victory happens to be a hard-learned lesson.

But the show's universal appeal rests in the audience's shared conviction that Devi is actually cool, in that way adults recognize but kids her own age are too clueless to understand.

Earlier when I used the term girls. I meant it to refers to women of all ages – not  in a patronizing way, but as an acknowledgment that a part of us never lets go of our adolescent awkwardness. This is true regardless of where and how we grow up. We've all been some version of Devi, can empathize with her stumbles and heartbreak; we understand why her sorrow makes her angrier, her moods cause her behavior to grow wilder and her ambition increases her cockiness. It's all part of the process of Devi coming her own, following in the vein of this series.

Season 2 of "Never Have I Ever" is now streaming on Netflix.

Mindy Kaling Netflix Never Have I Ever Review Tv