AOC is right: Biden's infrastructure bill isn't a win without an expansion of the eviction ban

What good are fresh new roads and bridges if they are surrounded by tent cities? 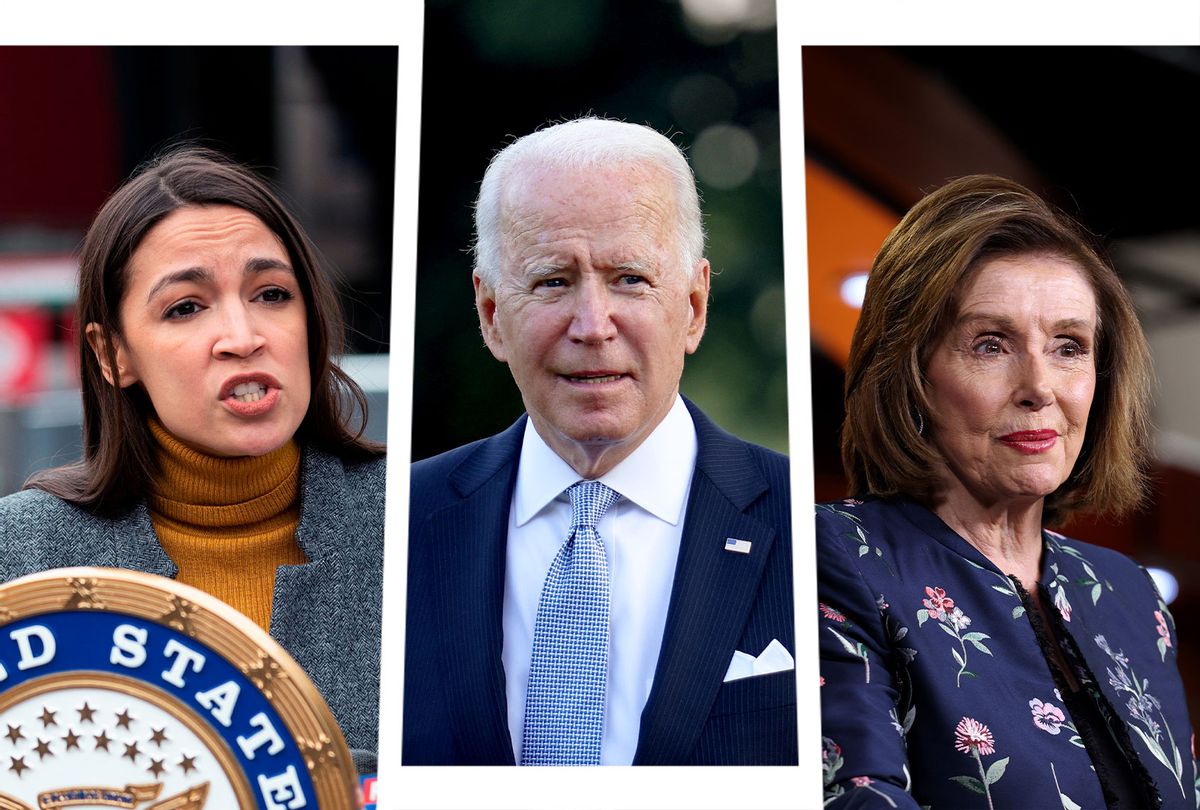 President Joe Biden and Democratic leadership are glowing with pride about a major infrastructure bill. It's bipartisan and therefore gets gushy praise from the Beltway press. Even voters, who don't really care about bipartisanship, care about shoring up crumbling American infrastructure, so the bill is a win in that department for Biden and the Democrats. But while Democrats hyped their still-fragile victory on moving that bill forward, another crisis threatens to steal the top headlines.

Over the weekend, Democrats in the White House and in Congress failed to extend the emergency eviction moratorium that was enacted as part of a larger pandemic relief effort. Now millions of Americans are in danger of becoming homeless, because they not only have to make rent this month, but, in many cases, find the money to pay months of back rent.

To make things worse, there's a whiff of incompetence around the failure to fix this situation before disaster strikes. As Brett Bachman reports for Salon, House Democrats are blaming the White House for waiting "until Thursday to announce that it would not attempt to extend the program due to potential legal challenges." Unsurprisingly, Speaker of the House Nancy Pelosi was unable to whip Congress into doing something at the last minute. Instead, Congress proceeded to begin a seven-week recess. She is clearly salty about the situation, putting out a statement Friday saying House Democrats "only learned about this yesterday," and declaring, "Action is needed, and it must come from the Administration."

That this is a moral disaster is beyond argument. Pelosi believes so, calling it "an act of pure cruelty" and while noting that "Republicans blocked this measure" by denying the House any possibility of unanimous consent to extend the moratorium. Rep. Cori Bush, D-Mo., led protests on the Capitol steps over the weekend, including a sleep-in to visually represent the huge numbers of people who may be turned out onto the streets because of federal inaction. Bush, who has herself been homeless, told reporters, "I know what it's like to wonder if I'm going to get that eviction notice."

But, to be frank, this isn't just the fault of Republicans. As Rep. Alexandria Ocasio-Cortez, D-N.Y., told the press, there was also the issue of "a handful of conservative Democrats in the House that threatened to get on planes rather than hold this vote."

What makes this even more baffling is that it's not just a moral failure — but a political one.

Democrats have been hyper-focused on passing big infrastructure bills, operating under the theory that showing Americans what competent governance can do for them will help restore faith in the system and institutions, which Biden deems a necessary component to beating back Donald Trump's ongoing authoritarian assault on democracy. But even if Democrats pass both the bipartisan $1 trillion bill and a larger $3.5 trillion infrastructure bill leadership plans for a party-line vote, this pitch for the value of competent government will be drastically undermined if millions of Americans lose their homes and are turned out on the streets.

America is already deep in a housing-and-homelessness crisis, and you can definitely bet that the well-financed propaganda arm of the GOP — mainly Fox News — loves to use images of tent cities and people sleeping outside to push a general message of fear, chaos, and decay. An explosion of people into the streets is basically a huge gift to the Republican propaganda machine, which uses scare stories about the homeless to beef up support for authoritarian politics and discourage Democratic voter turnout. No number of self-congratulatory statements about expanding broadband and shoring up roads and bridges with infrastructure spending will overcome the alarmist right-wing messaging painting unhoused people as a public menace.

Plus, there are the unhoused people themselves, their families, and friends. It is hard to really pitch this "Democrats show government can work" message to people who are finding that they or their loved ones are now homeless despite promises that the government would help them through financial hardships caused by the pandemic. And, to be perfectly blunt about it, keeping people as voters is a lot easier if those people have home addresses to register to vote under.

Ocasio-Cortez is getting a lot of blowback from moderate Democrats who don't like her being candid about internal party politics with the press, but she is only trying to save Democrats — who are already facing uphill election battles in 2022 and 2024, due to gerrymandering and voter suppression — from themselves. It's not just cold-hearted to let people lose their homes, it's political suicide.

What makes the situation even more frustrating is that the money to keep people in their homes exists. Congress appropriated $45 billion in funds to help pay back rent, which would not only keep people in their homes but keep landlords — many of whom are small business owners — from financial crises of their own with the loss of that critical source of income. But only a small fraction — $3 billion — of that money has been spent. The rest of it is tied up in red tape, and in many cases, red-state politics that create needless obstacles keeping people who are eligible from getting their money. Biden and Pelosi have been urging states to do more, but if the desperation of landlords for the past year hasn't moved things along, it's hard to imagine what a few words from Democratic leadership will do.

To be certain, Biden's hands have been tied by the Republican majority on the Supreme Court, which ruled last month against the executive branch extending the moratorium without congressional approval. And Pelosi is right that Republicans continue to be a major obstacle in Congress. But most Americans aren't following politics closely enough to know the ins and outs of how this happened, much less who is blaming who for this failure. All they will know is Biden won by promising a return to competent government and instead the nation saw an already out-of-control homelessness problem get worse. And the blame for it, as usually happens, will go straight to the top.

In many ways, this situation reflects the similar slow-rolling disaster around voting rights. Democrats focus their energies on splashy infrastructure bills that are broadly popular investments, betting that doing things people like will get votes. But while "do things people like" is generally good advice, it's somewhat useless if people can't reward you at the polls because Republicans have gutted the ability of people to vote and have those votes counted. Similarly, building roads and bridges only gets you so far, politically speaking, in a country where homelessness is a national crisis. People are unlikely to vote if they're homeless, for one thing. Moreover, homelessness has a visceral impact that more abstract talk about bipartisan infrastructure bills simply cannot overcome.

The eviction crisis is, above all other things, a moral failure. It's also a reminder that our nation's political and economic priorities are so distorted that we can't even solve a problem that literally everyone, no matter their political ideology, wants to go away. But if Democrats don't do something soon to fix this, it's also going to be a huge political problem for them, one that makes the already iffy plan to beat Republican election fixing through organizing voters even harder to pull off. If centrist Democrats can't be moved by compassion, they need to think about their political futures. It is, after all, really hard to sell that bright-and-shiny image of America bouncing back if those fresh new roads and bridges you're building are surrounded by tent cities.