Are Trump's followers being conned? No — they gave him $100 million because they love him

Can we stop claiming that Trump's followers are his victims? They've made their choice, and must live with it 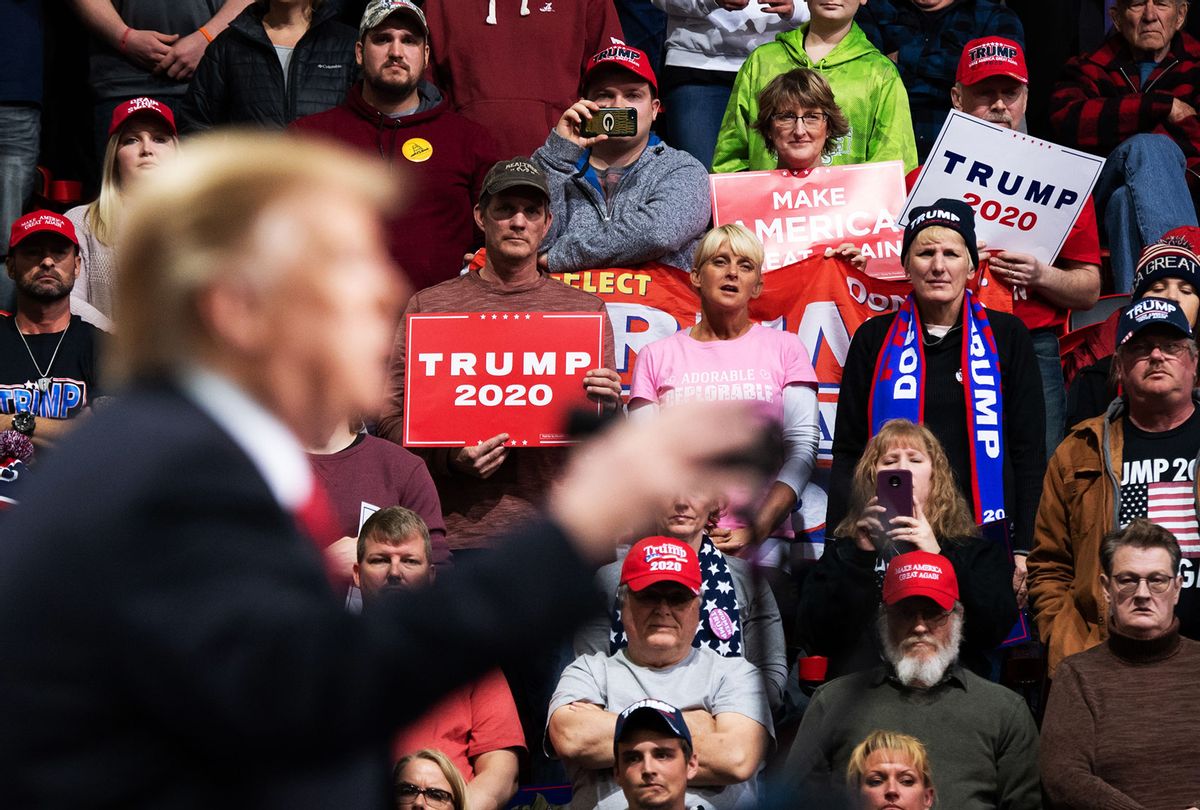 Donald Trump is the boss of a political crime family. He has internalized a basic rule and life mantra: Crime pays — if you are good at it, crime pays very well

Many political observers convinced themselves that Donald Trump would face financial ruin after his presidency. In the face of lawsuits and outstanding debts, the opposite has occurred: Trump instead finds himself sitting atop a huge pile of money. It is estimated that his fundraising campaigns since leaving office (combined with leftover cash from his 2020 campaign) have netted him at least $100 million. If anything, that's a low estimate of the money and other resources Trump could potentially command from his followers and allies.

What will Trump do with this money? He could of course pocket it. He can play the role of shadow president and kingmaker, expanding his control over the Republican Party. He can fuel a growing right-wing insurgency and neofascist movement. He can spend it on his potential 2024 presidential campaign.

Former President Donald Trump's political committees brought in $82 million during the first half of 2021 and have $102 million in the bank, according to federal filings made public Saturday evening.

The figures, shared first with POLITICO, underscore the profound reach of Trump's fundraising power. While the former president is out of office and has been deplatformed on social media sites, he maintains a massive online donor network that he could lean on should he wage a 2024 comeback bid.

The scenario is virtually unprecedented: Never in history has a former president banked nine figures' worth of donations to power a political operation. Over the first six months of the year, Trump's political groups whipped up supporters with baseless claims of election fraud to pull in cash on a scale similar to the GOP's official political arms, the Republican National Committee and the party's House and Senate campaign committees.

Trump has raised much of this money through questionable and perhaps illegal fundraising techniques targeting small donors, the most loyal and enthusiastic members of his political cult. These tactics include automatically reauthorizing one-time donations. His fundraisers have used threatening and harassing emails, promising both rewards for continued donations and negative consequences if the money stops flowing. Many details about the donations are concealed in blocks of small text that are difficult to read on a phone or computer screen.

In an April feature story the New York Times provided further context on the Trump fundraising machine, leading with the story of Stacy Blatt, a 63-year-old man in Kansas City who was living with cancer on a fixed income and believed he had been tricked into multiple donations last year by an unscrupulous online vendor. (Blatt died in February.) It was in fact "an intentional scheme to boost revenues" set up by the Trump campaign and WinRed, the for-profit company that processed online donations to Republican candidates:

Facing a cash crunch and getting badly outspent by the Democrats, the campaign had begun last September to set up recurring donations by default for online donors, for every week until the election.

Contributors had to wade through a fine-print disclaimer and manually uncheck a box to opt out.

As the election neared, the Trump team made that disclaimer increasingly opaque, an investigation by The New York Times showed. It introduced a second prechecked box, known internally as a "money bomb," that doubled a person's contribution. Eventually its solicitations featured lines of text in bold and capital letters that overwhelmed the opt-out language.

The tactic ensnared scores of unsuspecting Trump loyalists — retirees, military veterans, nurses and even experienced political operatives. Soon, banks and credit card companies were inundated with fraud complaints from the president's own supporters about donations they had not intended to make, sometimes for thousands of dollars.

"Bandits!" said Victor Amelino, a 78-year-old Californian, who made a $990 online donation to Mr. Trump in early September via WinRed. It recurred seven more times — adding up to almost $8,000. "I'm retired. I can't afford to pay all that damn money."

The sheer magnitude of the money involved is staggering for politics. In the final two and a half months of 2020, the Trump campaign, the Republican National Committee and their shared accounts issued more than 530,000 refunds worth $64.3 million to online donors.

The mainstream news media and other members of the political class have repeatedly described Trump's fundraising campaigns as a "con" or "grift," meaning manipulative and dishonest tactics that exploit his followers' ignorance or inattention. That language is not accurate or adequate to this reality.

Trump's supporters are dedicated to him. Many of them love Donald Trump as a personal god or savior. For the most part, Trump's followers and cult members are eager to give him money and do so enthusiastically. To suggest otherwise is to take away their agency and free will. The Times story cited above profiles Ron Wilson, an 87-year-old retiree in Illinois who had intended to give about $200 to the Trump campaign and unwittingly made 70 or so recurring donations adding up to $2,300. Although Wilson called the WinRed operation "predatory," he held Trump blameless, telling the Times, "I'm 100 percent loyal to Donald Trump."

For the media and political elites to insist that Trump's followers are victims of a con reveals a larger problem. Instead of taking Trump and his followers' words, beliefs and actions at face value, the political and media establishment is overly eager to find some alternative explanation. For example, Trump is "exaggerating," revealing his "ignorance" or engaging in "hyperbole," rather than lying. He is "posturing," rather than revealing his true intentions. He is "stupid" or a "blusterer," rather than dangerous. Going back to his first campaign in 2016, we were assured that Trump was just "speaking to his base" or "using crude tactics" for political advantage, and would "pivot" to more "traditional" positions and policies as president. None of that was true.

In a similar vein, we were urged to "understand" Trump's followers as "disaffected" members of the "white working class" who, whatever unfortunate views they might hold, were ultimately "good" and "patriotic" Americans.

Support for Donald Trump and his neofascist movement, in this consistent and deliberate misreading, was surely based on something other than white supremacy, social dominance behavior, racial authoritarianism, a growing support for fascism and other antisocial beliefs and values.

Far too many among the Democratic Party's leadership, the mainstream media and liberals and progressives more generally continue to engage in acts of narcissism and projection where they convince themselves — despite an abundance of evidence to the contrary — that Trump's followers and other Republicans possess the same values, beliefs, temperament, values and respect for reason, democracy and critical thinking that they do. These assumptions are critical errors, likely to guarantee defeat in a struggle against fascism and authoritarianism in which the future of American democracy and society is at stake.

The dominant narrative that Trump's followers are victims of a con summons up images of Christian ministries found across the country in communities of all kinds — rich and poor, urban, suburban and rural — where pastors live in mansions and drive luxury cars paid for with money donated by the congregation. Many members of such a congregation may be struggling financially, but they willingly donate to the church every week.

That dynamic provides a better frame for explaining the love and loyalty that Trump's followers have for him. Congregants give money to the Church of Trump until it hurts, because that pain is a sign of righteousness that will earn them approval and rewards, both in this life and beyond. They are not victims; this is all a choice.

Trump's flowery language does have a preacher-like tone, as does his rally theme: Save America. This slogan was used at the fateful January 6 event that preceded the attack on the US Capitol. It has since been displayed prominently at this year's Trump rallies in Florida and Ohio, and will be the theme for his upcoming appearance in Alabama. It suggests, most urgently, that whatever work must be done to heal the nation is not yet complete — and that Trump himself must lead that healing.

Trump's invocation of vague but fearsome enemies, his dire prophesies and his calls for donations brings to mind some evangelists who have used a deft combination of scare tactics and appeals for help to enrich their ministries — and themselves. This two-step is an American tradition that goes back generations to the 1930s radio preacher Father Charles Coughlin who railed against both former President Franklin Delano Roosevelt and unnamed communists to arouse a national audience that would donate to his ministry.

When Trump alleges that he can save the country and heal its ailments, he is like Rev. Jimmy Swaggart, who in the 1980s presented himself as an American hero who rose from a childhood "always on the brink of starvation" to become one of the most influential preachers of his time. Before his fall from grace, Swaggart's ministry employed thousands and took in as much as $150 million per year.

In the end, Trump's followers worship him both as an idol and an embodiment of their most destructive values, beliefs and behavior. He is them; they are him. To outsiders such a relationship appears pathological. For the Trump faithful, it has created a life of meaning, relieving their spiritual and emotional emptiness. This relationship dynamic is frequently found between charismatic fascist leaders and their followers.

Trump's followers are making a choice to love him. That love is not coerced, and they are not "victims" or "marks." For Trump's flock to abandon him at this stage — and perhaps ever — would feel like emotional, psychological and perhaps even physical self-harm. Very few of them will do such a thing. Trumpism is giving them life, even as it destroys them.