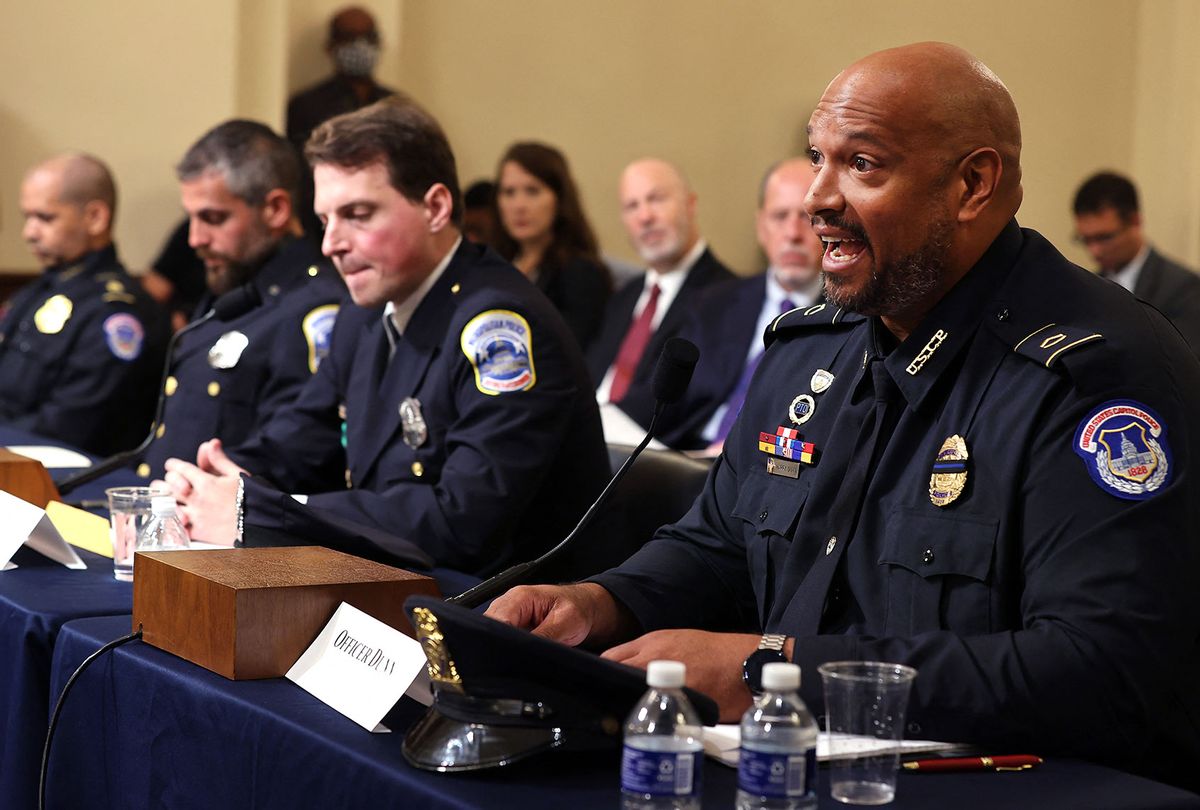 On Jan. 6, Donald Trump attempted a coup to nullify the results of the 2020 presidential election. Thousands of his followers attacked the U.S. Capitol with the goal of preventing the certification of the Electoral College votes, a ceremonial procedure that would formally make Joe Biden the next president of the United States.

Five people died as a result of the Capitol attack. Capitol Police and other law enforcement fought bravely before being overrun by Trump's cult members, political goons and right-wing street thugs and paramilitaries. If not for the valiant efforts of those officers that day, the halls of Congress could have been turned into a bloodbath. Vice President Mike Pence, House Speaker Nancy Pelosi and others deemed by Trump and his followers to be traitors could easily have been murdered.

Trump's attack force made no attempt to hide their faces. They carried white supremacist flags and other regalia. They assembled a gallows in the park across the street from the Capitol. They carried a Christian nationalist cross and participated in group prayers before attacking the Capitol. The MAGA flag was viewed as a substitute for the American flag, if not as something superior. These terrorists believed themselves to be "patriots" who were defending the "real America" and of course the man they viewed as its true leader.

As we saw that day, fascist movements claim a special love for the police and military but will eagerly purge them for acts of "disloyalty" to the cause.

Only 543 or so members of Trump's attack force have been arrested by the FBI and other law enforcement agencies so far. Most will not be charged with serious crimes, and very few will face felony charges that could result in substantial prison time. The coup plotters and enablers — most notably Donald Trump and Republican members of Congress — will likely never be arrested or otherwise held properly accountable.

They told the committee and public how they were attacked and beaten by rioters. They were clubbed, tased, crushed, blinded with pepper spray and other irritants, verbally abused (in Dunn's case, with racial slurs) and forced to confront the fear of death, overwhelmed and alone. The unifying theme in their testimony was that various kinds of fanaticism and rage, fueled by white supremacy, conspiracy theory, religious fundamentalism and cultlike devotion to Donald Trump propelled his attack force forward.

Despite the heroism of those officers and others, the coup continues. Jan. 6 was but one stop in a journey by Trump supporters, the Jim Crow Republicans, and the larger neofascist movement aimed at overthrowing multiracial democracy.

Donald Trump himself spoke at a rally in Phoenix on Saturday. He continued to threaten political violence against the Democrats and others who "stole" the 2020 election from him and his followers. The "Big Lie" was reinforced with a new conspiracy theory about "routers." Trump channeled numerous tropes of white victimology; his thousands of devoted followers basked in their collective sociopathy. The rally was clearly invigorating for Trump's broken and alienated followers, if only for a few hours. Such is Trump's power over his cult following, for whom he acts as a human intoxicant.

The mainstream media largely chose to treat Trump's rally in Phoenix as a sideshow not worthy of extensive coverage. This reflects a logic where if Trump and his neofascist movement are ignored, the danger to the country will go away. It will not. In hopes of better understanding Donald Trump's escalating threat to American democracy and the growing power of his fascist cult and movement, I asked several experts from a range of backgrounds for their thoughts on his speech in Phoenix.

Jennifer Mercieca is a professor of communication at Texas A&M, and the author of "Demagogue for President: The Rhetorical Genius of Donald Trump."

Former President Donald Trump is America's first "pretender to the presidency." We've never had a president claim to be president when he is not. We've never had a former president insist that he won the election when he did not. His speech in Arizona was for his partisans only, it wasn't meant to persuade anyone who doesn't already agree with his view of reality. It was awash in conspiracy theories. Trump's main message is "politics is war and the enemy cheats." That claim informs Trump's whole view of politics, including his election conspiracy claims. Trump's "pretender to the presidency" speech was dangerously anti-democratic.

Norm Ornstein is an emeritus scholar at the American Enterprise Institute, a columnist and contributing editor for The Atlantic and co-author (with E.J. Dionne Jr. and Thomas E. Mann) of "One Nation After Trump: A Guide for the Perplexed, the Disillusioned, the Desperate, and the Not-Yet Deported."

Donald Trump has tried to overturn a legitimate presidential election ever since last November. He incited a violent and deadly insurrection at the Capitol. He has lied every day, and is a traitor to his own country. Trump's speech in Arizona took the next step by trying to get the state's Republicans to decertify their 2020 election results, another step to undermine our system and divide us further. And of course, Trump is thoroughly corrupt. He does not belong in civil society.

Federico Finchelstein is a professor of history at the New School for Social Research, and the author of several books including "A Brief History of Fascist Lies." His writing has appeared in the New York Times, the Washington Post, Politico and the Guardian.

The Arizona speech made clear that Trump desires to be a fascist. He represents a return to the key elements of fascism: a style and substance steeped in political violence, a leader's cult, dictatorial aims and practices (remember the coup), a politics of hatred, religious fanaticism, militarization of politics, denial of science and totalitarian propaganda. Trump lies like a fascist. Fascists believe their lies and try to transform reality to resemble their lies. This is what Trump expected of his public in Arizona.

Dr. David Reiss is a psychiatrist, expert in mental fitness evaluations and contributor to "The Dangerous Case of Donald Trump."

People are expressing the opinion that Donald Trump is deteriorating, be it emotionally and/or cognitively. I have not evaluated him, so I have neither a clinical baseline nor an acute clinical opinion. But I know what I see and what I hear. This all leads me to one conclusion: As a person and regarding any possible "diagnoses," Trump is mostly unchanged.  Unhappier? Almost certainly. Angrier? Without a doubt. He also appears to be vengeful, vindictive and sadistic to a dangerous level. What is new about that?

Trump has always relied on inventing reality extemporaneously to fit his mood and to connect with his audience. He has always had an expertise in that area, such that by now it comes naturally and without planning. He has always been very "strategic" in the moment — but not much further down the road than a few minutes into the future.

CNN recently featured a headline that read "This is the most unhinged Trump rant about the 2020 election yet." Trump is lying more, but Trump is not "more unhinged." Trump has always responded to being uncomfortable with reality by inventing his own reality to meet his needs. He is more uncomfortable with objective reality since Nov. 4, so of course he is increasingly inventing different "realities" that are even less grounded in reason and reality than the ones previously.

Jean Guerrero is an investigative reporter and author of "Hatemonger: Stephen Miller, Donald Trump, and the White Nationalist Agenda." Her writing and other work has been featured by the New York Times, PBS and NPR. She is currently an opinion columnist at the Los Angeles Times.

Trump's speech was pure gasoline on the flames of white extremism. While much of it sounded like incomprehensible and presumably improvised gibberish, the speech also included the trademark pseudo-intellectualism of his former speechwriter Stephen Miller, with the latter's mastery of white supremacist talking points.

The most disturbing element was Trump's calculated and deliberately vague promise that Democrats plan to "get rid of" certain people, dog-whistling a meme that has been spreading on far-right social media called "Ten Stages of Genocide," which implies that liberals are plotting to exterminate Trump supporters. Trump began his presidency persecuting Mexicans, Muslims and Central Americans while conjuring false visions of their violence to justify that persecution, then expanded to target Black Lives Matter protesters and anti-fascists with the same strategy. Trump is now making it clear that if he returns to office he will be going after all liberals and encouraging his supporters to do the same.

He is inciting political persecution against his critics by promoting delusions of persecution among his armed, white supremacist, violence-loving base. It can be tempting to write off white grievance politics as a joke, but as Trump's own DHS acknowledged, it remains among the top threats to homeland security, as embodied in conspiracy theories about white genocide that Trump is openly embracing.

Trump's claim that "woke politics takes the life and joy out of everything" speaks to the fact that his happiness appears to hinge on the ability to freely scapegoat and persecute others without accountability. We can't be complacent about the threat that Donald Trump continues to represent to democracy and the American people's collective grip on reality.

Jason Stanley is a professor of philosophy at Yale University, and author of "How Fascism Works: The Politics of Us and Them" and "How Propaganda Works."

Trump's speech in Arizona brilliantly structured the themes in American politics that are gradually coming into greater clarity as a fascist social and political movement centering on Trump as leader. In fascist ideology, communists are supposedly seeking to destroy the nation by opening the borders to immigrants who will dilute the majority population and give power to ethnic and sexual minorities (currently, transgender persons are the most vilified by the far right worldwide, and Trump's speech was no exception). Fascism requires minorities to vilify to create panic and fear among the dominant majority. The fascist leader represents himself as the nation's savior and only hope against these threats. In the case of the United States, fascist ideology has always taken the form of exaggerating threats to the dominant white Christian population. The fascist leader presents the options as total loyalty to him or subservience to the communist agenda. All of these fascist themes were front and center in Trump's speech.

In reality, of course, the election was fair. New York City in July had one of its lowest homicide rates in history. Violent crime is not sharply up, and certainly not high given historical trends. None of this relevant in Trump's world, where loyalty to his version of reality is the only possible way of expressing American patriotism. This is fascism in its pure ideological form.