On "FBoy Island," the line between nice guys and fboys is thin to nonexistent

If self-proclaimed “nice guys” aren’t to be trusted, are we better off with fboys? 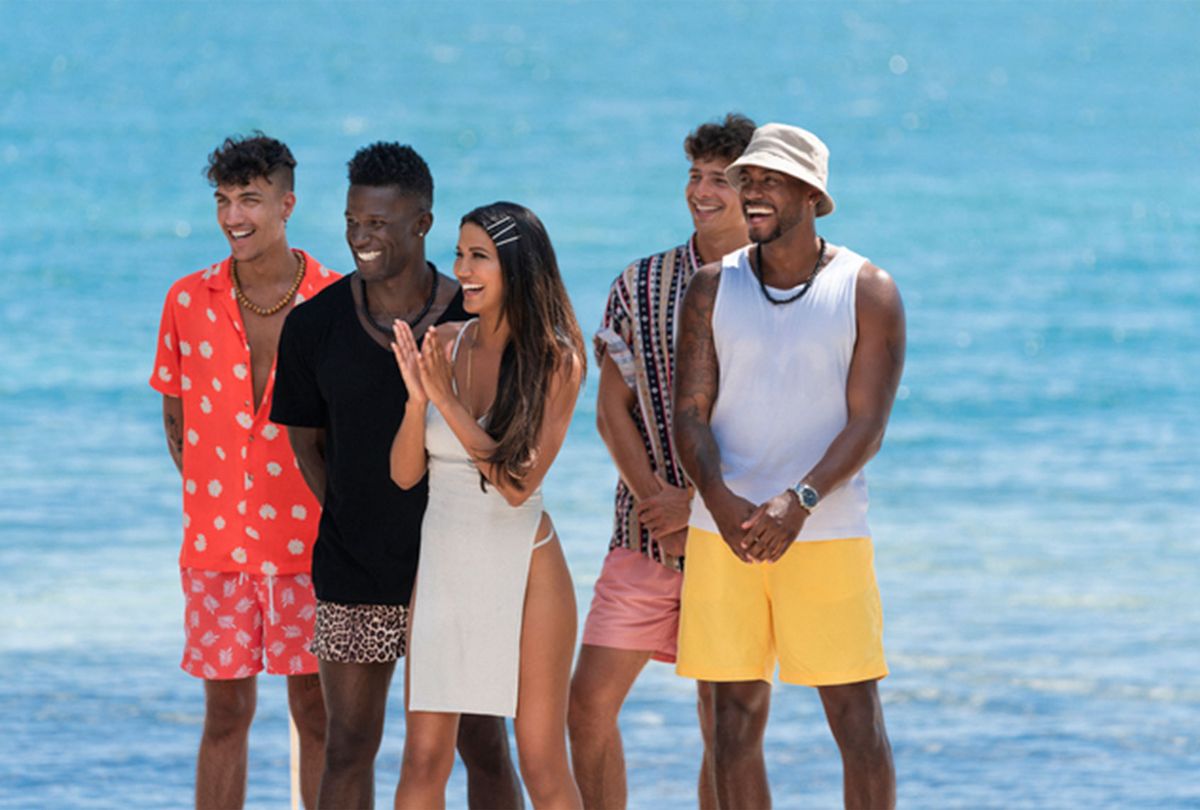 On HBO Max's hit reality series "FBoy Island," three women looking for love seek a potential mate among 24 bachelors, half of whom self-identify as "nice guys," and the other half as "fboys." Throughout the series, CJ, Sarah, and Nakia scope out who they can and can't trust, while their fboy suitors attempt to camouflage as nice guys, and charm the women for a chance at $100,000.

Simple, right? But through twist after twist on the show, you'll find there's almost nothing simple about how we recognize and define who is and isn't a "nice guy," certainly in a patriarchal society, and also on "FBoy Island." The show makes a pretty strong case for the reality that there aren't actually many differences.

In an interview with Salon, "FBoy Island" creator Elan Gale confirmed that the team "talked a lot about the verbage" of these labels, and the show's intent to not treat "fboy" and "nice guy" status as assessments of the contestants' moral characters. Rather, the labels on the show exclusively speak to the men's intentions for being on the show and when it comes to dating. Everything else is immaterial.

"There's no such thing in my mind of a 100% fboy or 100% nice guy," Gale said. "A lot of these guys fall into a lot of gray area in between. Being a nice guy doesn't mean you're going to do everything right; being an fboy doesn't mean you're going to do everything wrong. We use these titles, but what we really get to see is there's every kind from 0 to 100 on the fboy to nice guy spectrum."

The women on "FBoy Island" discover this themselves in the fifth episode when the remaining contestants put their cards on the table and confess their fboy or nice guy status. While the women are disappointed when certain leading suitors – like Garrett and every guy Nakia likes – end up falling into the fboy category, one of the most shocking reactions is to the unveiling of a nice guy.

But the women shouldn't have been caught off guard. Spoiler alert: Many self-identified nice guys aren't actually all that nice. Plenty, in fact are bold-faced liars or simply lack the self-awareness to even realize they aren't nice. In other words, they're either fboys themselves or worse, just plain bad people.

Gale agrees that "nice guy" is and has always been a loaded term, and the show was deliberate about calling them nice rather than good. Much of what we choose to recognize as "nice" from men stems from low standards and expectations for male behaviors, such that something as basic as being open to a relationship makes a man "nice," and sometimes even justifies looking the other way on their numerous not-so-nice behaviors.

Since the entrance of Jarred Evans, aka New Jarred, in the third episode of "FBoy Island," we watch as he swerves from trying to woo Nakia to CJ, stirring the pot by starting possessive, often toxically masculine, name-calling fights with other contestants every step of the way. His presence is immediately grating to the other men, yet, to the surprise of the female leads and especially CJ, in the show's fifth episode, Jarred reveals he's a nice guy.

"What is going on? I am shook, blown away," CJ says. "How is Jarred a nice guy, did someone make a typo? The way everyone else got upset when he came in, and I figured you were causing the riffraff," she adds, referring to the numerous macho, peacocking fights New Jarred instigated.

CJ even apologizes (apologizes!) for having perceived Jarred as an fboy, as if it's her fault for misinterpreting his not-so-nice behaviors, rather than Jarred's for behaving this way. Eventually, CJ rationalizes Jarred's nice guy identification, ceding bare minimum, nice-ish behaviors from him: "He does act pretty sweet, and I guess he's, like, kind of polite."

Still, just because Jarred says he's a nice guy, are we really to accept that premise given his behavior? Are we to believe his words and self-perception over what we've seen with our own eyes?

Similarly, contestants like Garratt Powers, eliminated on the first night for his creepy behaviors toward Nakia — including reading her a poem he's written despite her obvious discomfort — have seriously shady tendencies, only to claim nice guy status upon elimination, and flash a sort of smug look, as if the women have lost out on something.

Wanting or being open to a relationship doesn't make a man a good person, and certainly doesn't mean they have the maturity and sensitivity to respect women's boundaries or not instigate petty, hypermasculine competitions with romantic rivals. "FBoy Island" is clear about what the term "nice guy" does and doesn't mean, but it seems worth emphasizing that plenty of not-so-nice guys will be regarded as nice for the bare minimum. And such men aren't necessarily the most trustworthy figures when it comes to self-evaluation and assessment.

So, what does it all mean? If self-proclaimed "nice guys" aren't to be trusted, are the leading ladies of "FBoy Island" and straight, single women everywhere better off pursuing fboys who at least are who they say they are? Not necessarily.

Self-awareness should be a starting point — not an end

The fboys of "FBoy Island" may at least, at this point in the show, be open about who they are, or who they were when they joined the cast. On some level, it's tempting to regard this self-awareness and honesty with prospective partners as refreshing. Let's face it — there's almost nothing more toxic than a poem-reading, fedora-wearing, self-identified nice guy who treats you and others poorly, but remains determined to gaslight you into believing they're nice, despite this.

But the answer to this isn't to embrace fboys. Case in point: Casey.

The end of Episode 4 of "FBoy Island" comes with the show's first major shock, as CJ's main love interest, Casey, the "hottest guy in Ohio" is forced out of the competition as part of the surprise double elimination. Casey then reveals he came on the show as an fboy, surprise-surprise, before launching into a retaliatory tirade about how CJ "doesn't deserve any of the guys on this show." Then in an on-camera talking head segment, he suggests that at 30, CJ should be more mature, speaking about her age as if it's a sort of insult.

Casey's elimination is not in any way CJ's fault, since she only put him in the hot seat as a warning for his earlier aggressive behaviors. But she had saved him, choosing another guy to leave. It's one of the production's many twists that gives Casey the boot – but in his anger, he doesn't care, and instead lashes out at CJ, the woman he's supposedly falling for.

The show's other leading fboy is a full-time bitcoin investor (duh) and self-proclaimed "king of 'FBoy Island,'" Garrett Morosky. His reveal as an fboy is pretty much no surprise to any of the women, which you'd think would have been a bit of a red flag, despite how he remains a clear favorite of Sarah's. Garrett even owns up to a murky relationship timeline prior to starting the show. Nevertheless, his lies, deceptions and sudden strokes of honesty and performative goodwill have become so frequent as to be inseparable at this point, entrapping Sarah in a perpetual guessing game.

The intention of "FBoy Island" is, according to Gale, to portray the deceptive realities of dating in the Tinder age, a time when women's options usually aren't a picture-perfect "The Bachelorette" cast vying for our hand in marriage. Instead, we're forced to play guessing games about the motives of a mix of shady and slightly less shady online suitors.

But the show also comments on the reality that there aren't actually many differences between men who identify as nice guys, and men who identify as fboys. "Nice guys" often think the mere act of dating a woman entitles them to the label, and certainly entitles them to any outcome they want from a woman in exchange for their "niceness." Fboys are usually sleazy, dishonest men who think it's good enough that they know they're sleazy and dishonest, and lack intention to correct this. Knowledge of your issues with dating is a starting point — it shouldn't be the end.

The show is well aware of all of these conflicts and philosophical debates, and though it's all in good fun, Gale says "FBoy Island" ultimately welcomed change and growth in contestants. "A big part of the show generally was people are moving targets. Human beings are ever evolving and changing," he said. "We hoped the fboys would slide a little bit further into the nice guy camp — and the nice guys would not be boring."

"FBoy Island" puts that potential evolution up for scrutiny in its finale, when the series releases its final four episodes on Thursday, Aug. 12 on HBO Max.