"Reservation Dogs" is steeped in pop culture. The difference is that its homages star Native actors

The title may be a nod at slick indie crime stories, but its actually a hood-style comedy that's cleverly familiar 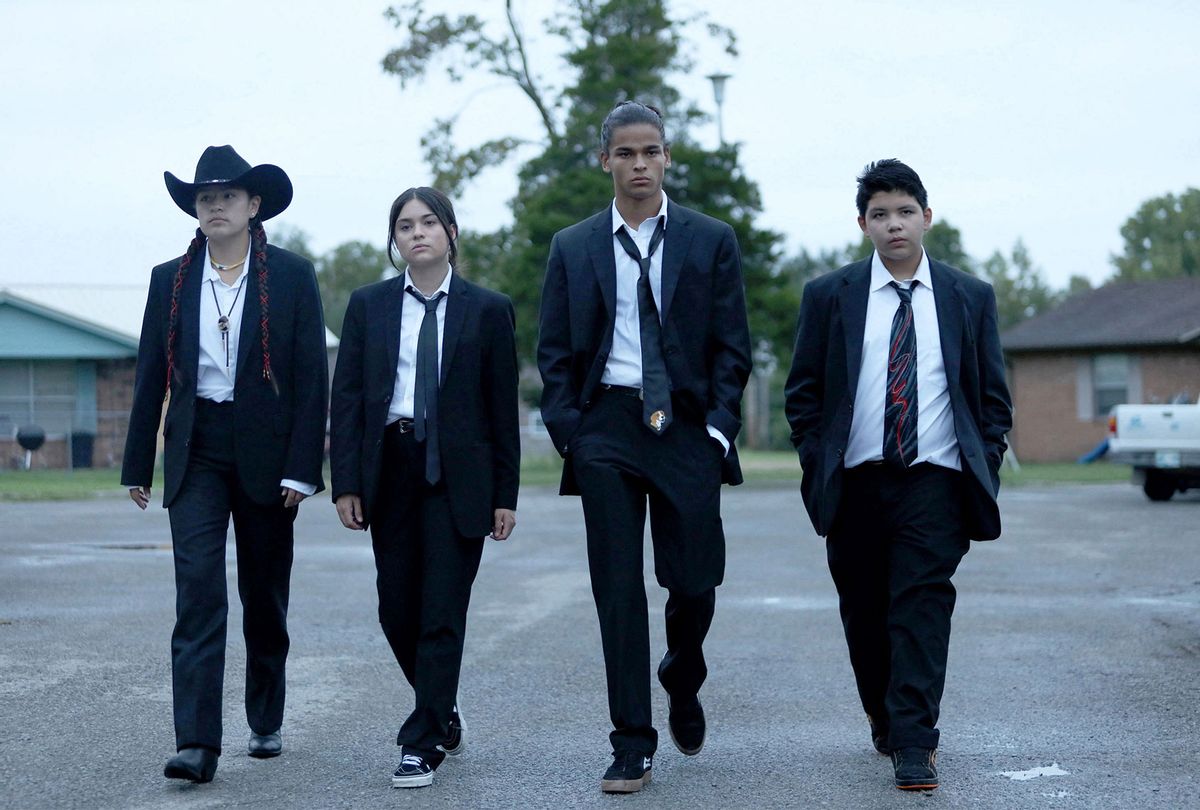 Quentin Tarantino never hid the fact that he lifts scenes and themes from other movies. That doesn't make his films less original or worthwhile. Some would say his conscientious odes add legitimacy to his artistry, proving his extensive knowledge and study of the artform.

Plus, it's a neat trick. Only the most discerning viewers noticed what he was doing. The rest of simply thought "Pulp Fiction" and "Kill Bill" were cool without realizing part of the reason we like them is that they plug into an internalized nostalgia.

"Reservation Dogs" reminds me of this because of its title and a cinematic style, with visuals encrusted in 1990s indie grit. But series co-creators and executive producers Taika Waititi and Sterlin Harjo aren't simply painting a stylized crime caper set on a rez.

They've made something much truer to life, a comedy about four kids fluent in popular culture, mainly hip-hop. Everyone around them acts like they're gangsters living in a hood film. If so, that movie isn't "Menace II Society." Think "Friday," with a touch of "The Goonies" thrown in for flavor.

Cinephiles tend to regard movies about movies in reverential terms, especially when establishment-blessed filmmakers make them. "Reservation Dogs" is not quite that, but it is a show that knows its audience watches a lot of films and formulates its ideas about the world based on such fictions.

But the way Waititi and Harjo use cinematic callbacks is unique. They're jogging our collective pop culture memories to tell a familiar story with Indigenous actors. And they're using the fact that we've never seen such plots play out in rural Oklahoma, or written and filmed by Indigenous creatives, to tell non-Native people something about themselves, especially in terms of the assumption that non-white people should be versed in white culture with no expectation of reciprocity.

And it's all done with hilarity. From front to back, every episode rolls with a low key, consistent humor that invites you to float with it, placing you firmly within this world of loony, friendly neighbors and relatives. The result is liberatingly hysterical.

Of course, Bear (D'Pharaoh Woon-A-Tai) and his best friend Elora Danan (Devery Jacobs) and their fellow partners in crime Willie Jack (Paulina Alexis) and Cheese (Lane Factor) do have one thing in common with "Reservoir Dogs" counterparts, in that they're a crew of thieves.

But nobody's planning any diamond heists where they live. Low-stakes petty thefts are their gig, save for a series-opening theft matched in its boldness by its ridiculousness. Their thievery is meant to fund a move to California, a place that looms large in their imaginations as a kind of promised land.

Although the title carries a different connotation, "Reservation Dogs" is mainly a slice-of-life comedy that lets us tag along with the characters on very regular adventures. Bear sustains an injury requiring a trip to the local clinic where a jaded staff runs the place like an impenetrable bureaucracy. Another quest leads them to Elora Danan's uncle, an unstoppable brawler back in his day who since turned into a paranoid connoisseur of ancient weed.

He's one of a few adults of consequence around, which I'd attribute more to the producer's Spielbergian approach to centering the plot on this foursome. We get to know Bear's mother Rita (a charming Sarah Podemski) as loving and independent, but she's on her own mission to land a man of means or, barring that, a reliable dude with a steady job.

Harjo, who serves as the series showrunner and co-wrote the premiere with Waititi, establishes the innate goodness of these kids straightaway too. They're mostly outlaws in their own minds, and that's only possible because they live in a place where everybody knows everybody else, policed by a Lighthorseman called Big (Zahn McClarnon) who's more intent on capturing aliens than fighting crime.

But the kids' main challenge is staving off boredom . . . until they're confronted by a new-to-town gang set on dethroning them. Bear, Elora, Willie Jack and Cheese find that confusing because they never considered themselves to be a gang. Sometimes the fight comes to your doorstep instead of the other way around. And sometimes the battle and the schemes are a means of staving off sadness; we learn early on that the foursome used to have a fifth member, a friend they lost a year ago.

The cleverest filmmaking odes in "Reservation Dogs" tell on the mainstream audience by satirizing racist tropes perpetuated by Hollywood that have taken root in our culture. Like the spirit guide nonsense: Bear finds his while he's knocked unconscious. Unfortunately for him, his ghostly wisdom broker was no heroic legend, but the aimless in life William Knifeman. He tells a tale of riding into battle at Little Bighorn only to die a stupid death before he could make any diference.

"I came over the hill real rugged-like!" he says in his defense, before admitting, "The spirit world . . . is cold. My nipples are always hard."

Most of the show's comedy is woven into the dialogue, giving everyone a punchline at some point, although Woon-A-Tai and Jacobs mostly play it straight. (Jacobs has less of a choice in that regard given Elora Danon's role as the brains of the outfit and the fact that she shares a name with the baby in "Willow," a piece of trivia that inspires at least one bit in every episode.)

The greater revelation, aside from Alexis' naturally winning goofiness as Willie Jack, is McClarnon's deadpan kookiness. McClarnon is an actor known to most for stoic, barely verbal portrayals in "Fargo" and "Westworld," and with Big he plays off of that reputation by delivering doltish proclamations with utter authority – such as explaining to Bear why an energy drink is healthier than soda. "It's natural. It's made out of energy."

Don't underestimate the scene-stealing prominence of underground hip-hop artists Lil Mike and Funnybone as Mose and Mekko though. Their roles in the story fall somewhere between hood versions of Rosencrantz and Guildenstern and a Greek chorus, somewhat neutral parties who see all and prod conflicts into being, mostly to keep things interesting. And the performers deploy their flawless syncopation brilliantly.

If "Reservation Dogs" were set in other American places people would liken it to "The Wonder Years" and its core quartet's dynamic to that of the protagonists, "That '70s Show." But it is decidedly one of a kind, using homages to other shows and movies to solidify our connection to its heroes by tapping into a common love of such stories. Accurate, honest film and TV portrayals of Indigenous people in media barely exist, which lends an extra level of satisfaction and mirth to watching this show. It conveys the sense that these are people we know and love laughing with and cheering on. Better still, it makes us want to see more shows like it.