Creating those wild "White Lotus" wallpapers and the hidden meanings within

Salon spoke to the creators of the HBO series' decorative main titles. We'll never look at papayas the same again 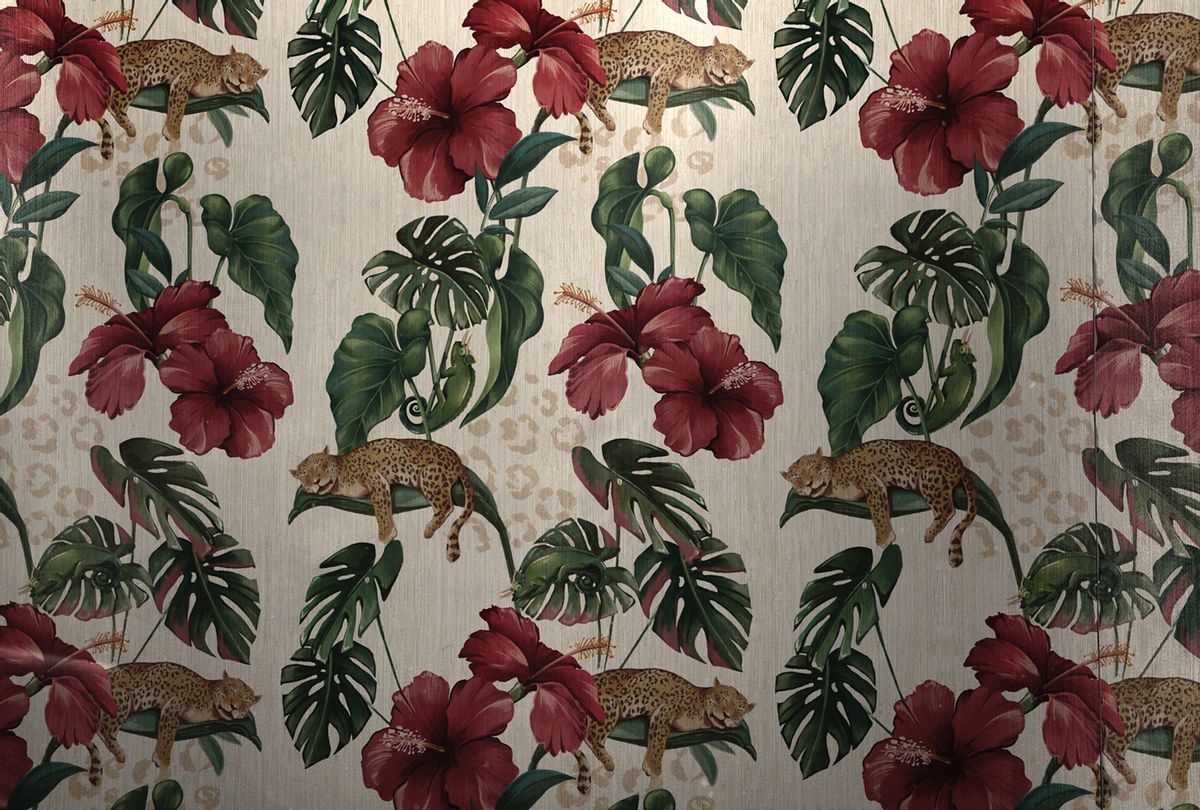 HBO's satire "The White Lotus" is the story of a vacation gone wrong for many guests and workers at a luxury Hawaiian resort. That's putting it mildly since one of them ends up dead. But you only have to watch the fascinating – and foreboding – main titles sequence to understand that something rotten is indeed afoot.

Presented as a series of tropical-themed wallpapers, the opening credits begin with images of paradise: lush monstera leaves, hibiscus blooms and snoozing leopards. But soon they make way for darker skies and deadlier creatures, like a camouflaged snake and stinging jellyfish, while images start to bleed and decompose. By the time the title "The White Lotus" flashes onscreen, viewers have been taken on a disturbing odyssey.

Katrina Crawford and Mark Bashore of studio Plains of Yonder spoke to Salon about the process of understanding the show's themes to create the main titles.

"The white lotus flower in all these cultures stands for rebirth and other different things," said Crawford. "It has roots in the mud, and yet is this gorgeous flower that presents itself beautifully at the surface. Also, [series creator Mike White] mentioned 'The Lotos-Eaters' poem, which is all about drifting through life and not actually integrating with things and wanting to hide from the realities of life."

That duality of experiencing beauty while something darker lurks beneath is a theme that also plays out in the main titles. Nothing is what it seems, and this was further inspired by the "tropical kabuki" philosophy practiced by resort manager Armond (Murray Bartlett).

"Armond in the first [episode] mentions something about 'tropical kabuki,' which was a term that we immediately latched on to – this idea of performance," said Crawford. "And then I think because [the show] is a mystery, we really could home in on the idea that details mattered. We try to really reward an audience for their time, for paying attention, and so we try to put little treats and surprises in."

Plains of Yonder hired Australian illustrator Lezio Lopes to draw the actual tropical images. These were then digitized in order to add details like "misregistered seams" and wallpaper-like textures. Subtle animations of key elements highlight the themes of toxicity and betrayal. Throw in an extra bit of cheeky symbolism, and it's safe to say you can't pick up these wallpaper patterns at any Crate and Barrel.

Take a look at "The White Lotus" main titles:

While the opening credits are partly a journey into darkness, they're also more mundanely a tour of The White Lotus resort. Each of the four wallpapers seen in the main titles echo the show's four main suites: Palm, Hibiscus, Pineapple and Tradewinds.

"We thought about how to build some sort of progression. We started with the four suites. In the actual show, one's called the Palm Suite, and that's the first one that shows up, which is palm fronds, monkeys and there's actually a bird called a honeycreeper," said Bashore.

Crawford explained the significance of including the bird.

"The honeycreeper – there used to be like 50 different kinds in Hawaii, and now they're down to very few different ones," she said. "So they're either endangered or threatened, and there's a lot of issues for them. So we felt like that idea of this fragile beauty was kind of interesting." 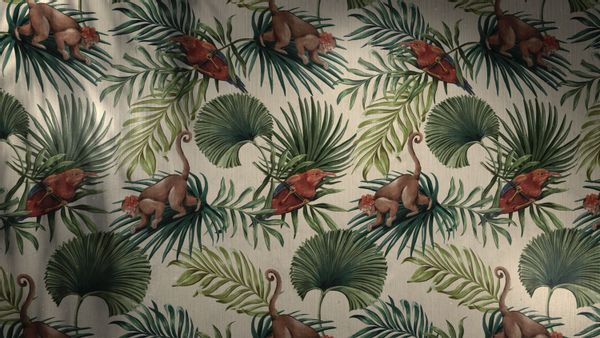 The images are all open to interpretation, so Crawford understands why fans would see newlywed couple Shane (Jake Lacy) and Rachel (Alexandra Daddario) as the wallpaper's monkey and honeycreeper since they are housed in the Palm Suite. The main titles, however, do not necessarily stick with the show's rooming assignments.

"When the titles come up, it's Jennifer Coolidge's name with the monkey on the smaller card," said Crawford. "These are loose references, but they're sort of fun."

Bashore added, "It seemed to fit her character pretty well. It's funny with the flower [behind her] ear, and we watched the show and one of the one of the episodes she's wearing this giant monkey dress." 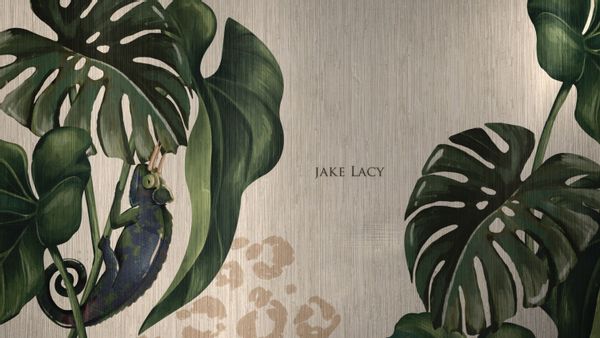 In the series, Coolidge's character Tanya has the Hibiscus Suite. While the flower itself is native to Hawaii, the animals seen in that wallpaper (seen in the story's main photo) are not.

"Leopards obviously are not Hawaiian, but we were sort of playing with that idea of the introduction of things and colonization [on the show], so that sort of felt OK to do," said Crawford.

While the main titles were subject to artistic colonization, an actual invasive species present in Hawaii is featured when Jake Lacy's title card comes up.

"It's a Jackson's chameleon, and they were I think imported in the '70s from Africa," said Crawford. "So they're an invasive thing and basically, they were released from the pet trade. They show up on some of the islands and they're a little bit destructive, and they're gorgeous.

"We had a lot of fun playing with them [in the main titles]. When the chameleon changes color, that's Jake Lacy's card."

Perhaps we should ask Rachel if she thinks Shane has changed his colors. 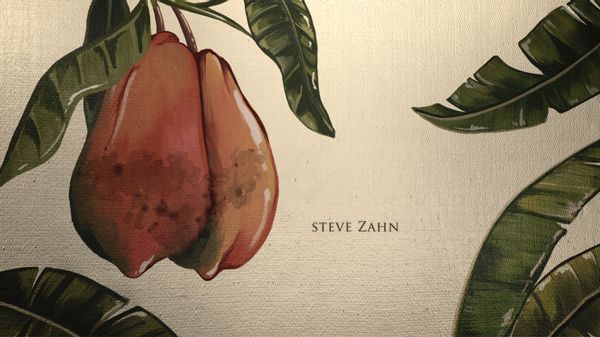 The pineapple wallpaper is filled with tropical fruit and looks fairly straightforward, until the solo title cards come up. Eagle-eyed viewers have noted the poisonous monarch caterpillars wreaking havoc on some leaves. Plus, Crawford points out that when the title card for Sydney Sweeney (who plays Olivia) pops up, a yellow and black snake flicks its tongue subtly.

However, the honor for the cheekiest Easter egg in the main titles belongs to Steve Zahn, who plays Mark. On the show, the Mossbacher patriarch has a health crisis in which he believes his rather swollen testicles could be a sign of cancer.

"They aren't doing very well on the vine," said Bashore. 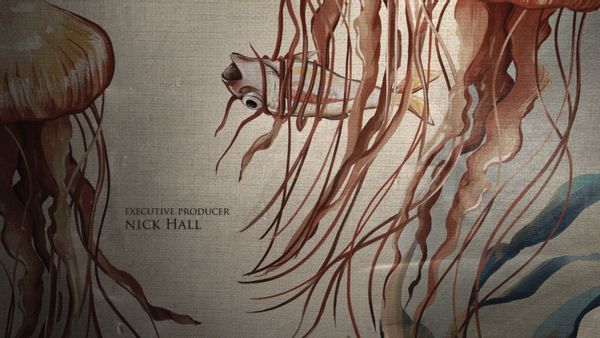 In "The White Lotus," the Mossbacher family is given the Tradewinds Suite, and art of an outrigger boat is seen on their wall. Son Quinn (Fred Hechinger) also finds that he enjoys paddling out with the locals on their outrigger.

Bashore noted, "The grand [wallpaper] is the Tradewinds one because it's really got more hidden stories in it." As in the Mossbacher's suite, this final wallpaper includes repeating patterns of an outrigger canoe paddled by islanders alongside jellyfish and their trailing tentacles.

"There's this idea of sort of an undertow to paradise. We almost depicted it literally in a sequence with a boat that's in harm's way, and then an ocean with no boat on it," said Bashore. "Viewers can make up their mind what happened to that boat. For a minute we discussed, 'Should the boat actually be kind of tipped over in the water?' So we're always kind of holding back."

Although that boat may have been saved from a dark fate, one fish is not so lucky. When the titles close in on one of the jellyfish, a sad, upturned fish can be seen caught in its tentacles.

"It's giving up the fight," Crawford confirmed.

"When we go underwater we wanted to depict death in a way that still kind of maybe makes you smile," said Bashore. "If we can get people to almost feel sorry for this poor little fish that none of us actually know, we've kind of done our job because there's sorrow there. But it's also cute and it's funny. It captures the whole show, right? And it's nothing like an upside-down fish to let you know that that probably wouldn't actually exist in paradise or in wallpaper." 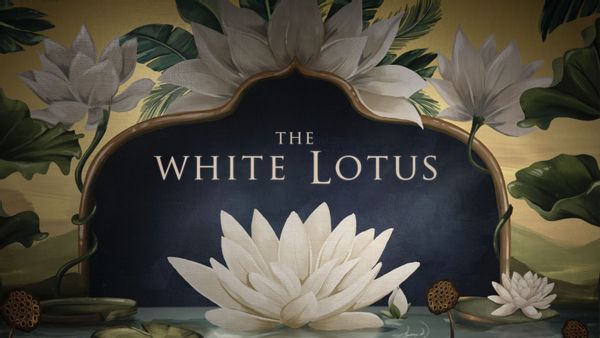 The final title card for "The White Lotus" itself is not treated as a wallpaper. There's no repetition, but there is an archway.

"We like this idea of a portal of like, you're about to enter the show," said Crawford, "but it's also reflected in the pond, And so it's like, 'Where's the reality?' That just felt like a good reference for the show of like, whose reality is the real reality and how we can reflect and mirror each other? And there's the tension between isolation and being in a community."

Bashore spoke to the different artistic treatment of this title card to create a more visceral experience for the viewer.

"We also have moved completely out of the wallpaper world by then," he said. "We do this thing where we slice up the layers of the illustration, and as the camera pulls out, the layers are moving. It's called parallax. The foreground layers are moving at a different rate than the background.

"So you can feel like it's a world – there's a sky and mountains back there and the water is shimmering. There's actually steam rising off the pond. It feels steamy, and it's got a darkness to it. You hear animal sounds in the music track [by composer Cristobal Tapia de Veer]. And it feels quite haunting to me."

The scene is beautiful, but there's still a sense of unease there. Part of that could be the inclusion of the many-holed lotus seed pods that inspire dread in those who experience trypopohobia. (Although Bashore denies this intention, he thinks it's a bonus interpretation.)

"It's kind of got this shrine vibe to it," he added. "Maybe that we depicted a boat disappearing, a fish upside-down and then there's this sort of beautiful, swampy shrine – but it felt like the right way to really end grandly in this world.

Fans have been discussing and requesting "The White Lotus" main title wallpapers online. ("We're sending them to the illustrator.") For now, the Plains of Yonder crew is enjoying the response to their work, which has long mixed world-building and the natural world.

"The White Lotus" has been renewed for a second season as an anthology series that follows a new group of vacationers at another White Lotus property elsewhere in the world. Although Plains of Yonder hasn't been asked to make those opening credits yet, they're open to making more wallpaper or whatever else would be appropriate for the new installment.

"We haven't heard anything, but any chance to work with Mike White and his crew would be most welcome. We love the show," said Crawford.