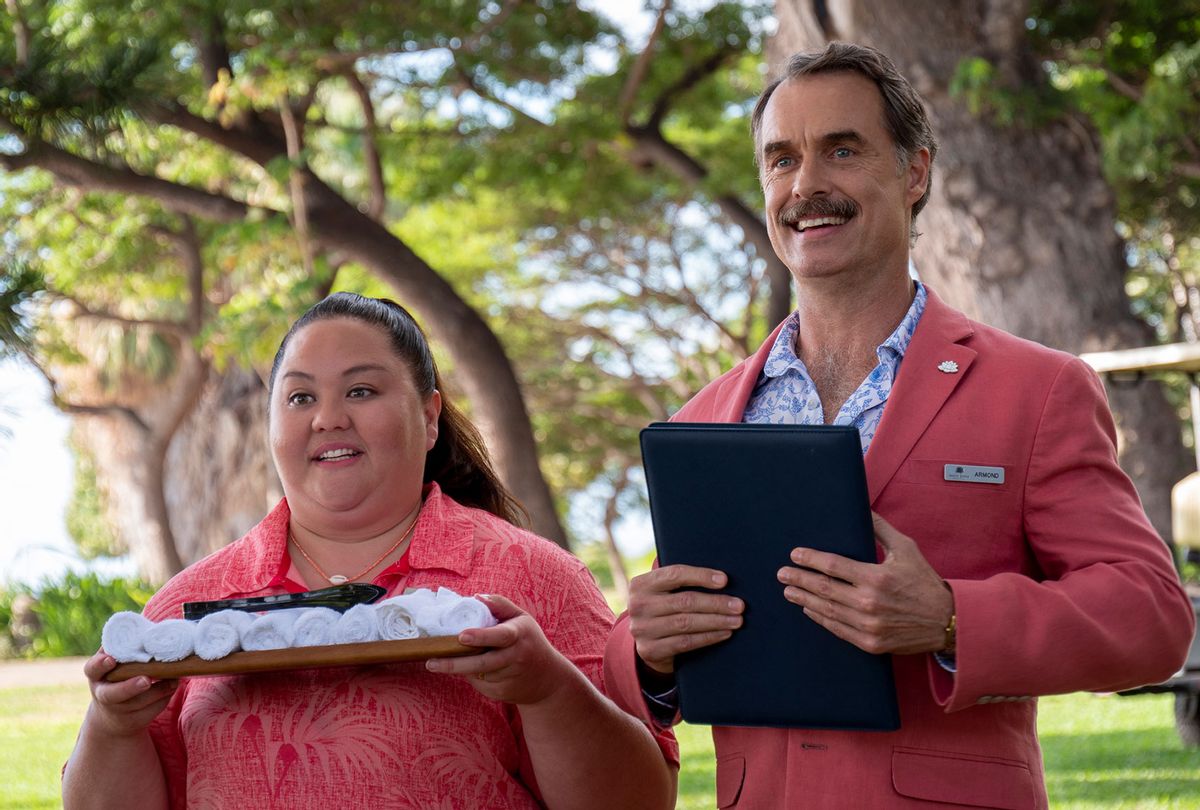 Mike White's TV writing filmography isn't long, but it is notable for his work's specific way to striking a cultural nerve – hard. A decade ago he gave us "Enlightened," a show in which the honestly intentioned if misguided spiritual seeker Amy Jellicoe, played by Laura Dern, personified the kind of flighty New Age spiritualism derided by virtually everyone who isn't a coastal dweller.

Dern's character in that show is timeless, and her performance still gets social media shoutouts from time to time all these years later. "Enlightened" was underappreciated in its time, canceled after only two seasons. It's also an acquired taste. Looking back, though, Amy's clumsy, dimwitted efforts to impose her will to self-actualize upon an office that could not care less about its worker drones told us a lot about the ways we were fooling ourselves in 2011.

She was convinced that her life had potential that it didn't, and back then we fooled ourselves into believing the world was better than it actually was.

No such illusions blur our vision in 2021, which informs the entertainingly cruel streak in White's new six-episode HBO limited series "The White Lotus."  This time White trades the joy-deficient corporate world for a tropical Shangri-La where the entitled rich swim with sea turtles and work the last nerves of resort workers whose lot it is to cater to their every whim. Nearly everyone in this series is some version of odious, and the ones who aren't are some version of trapped. That's life on an island for everyone, visitors and residents alike.

The visitors get to leave, which the eponymous Hawaiian resort's manager Armond (Murray Bartlett), takes advantage of by surreptitiously torturing them. But they give as good as they get, which is the larger point. White understands the nuances of class struggle and how manicured paradises have a way of relaxing the unsuspecting into dropping their masks.

He also gets the way that travel and luxury can bring out the worst in people, especially powerful people with time on their hands.  "The White Lotus" derives its tension from reminding us at every turn that nobody is entirely innocent. Certainly not the rich-boy Shane Patton (Jake Lacy) and his meagerly earning journalist wife, Rachel (Alexandra Daddario), honeymooners who almost immediately find reasons to be unhappy and make Armond miserable.

The spat between Bartlett's Armond and Lacy's Shane is a bit more typical in the way it makes the most of Bartlett's prickliness and Lacy's aptitude for portraying frat-bro snobbery. Still, it's extraordinary to witness the actors and White convincingly extend Shane's nitpicky dissatisfaction with his fine suite through most of the series, to the point that he calls in his cheerily affectless mother (a brilliant Molly Shannon) to assist him with flogging the help.

They have that in common with hyper-successful businesswoman Nicole Mossbacher (Connie Britton), a woman who can't cede control of any situation, including the furnishing arrangements in her hotel suite. Nicole's husband Mark (Steve Zahn) despises her slightly less than he fears her, and neither is entirely respected by their children.

But that doesn't make them special, since their awkward, moody teenaged son Quinn (Fred Hechinger) exists at the mercy of their daughter, Olivia (Sydney Sweeney) and her best friend Paula (Brittany O'Grady), a pair of college-age cynics newly indoctrinated into the teachers of Nietzsche and academic analysis of gender relations. They inflict their newfound sense of intellectual superiority on the adults around them, and each other, never letting anyone get the better of them.

Discomfort is the core commodity of "The White Lotus," in case you can't tell; braiding wealth, power and plenty creates a heady narcotic, and the plot is drunk with it. It's almost a relief knowing that somebody is going to die, one of the first reveals in a premiere that drops us in near the end the story before yanking us back to the beginning like the day's fresh catch.

Examining the transactional patterns between guests and staff, and guests of richer guests, allows White to dig into class inequities more effectively than racial dynamics or issues of cultural advantage. This works best in the purchased friendship between spa manager Belinda (Natasha Rothwell) and the lonely, depressed Tanya McQuoid (Jennifer Coolidge), a clingy woman mourning the loss of her mother and grabbing at Belinda as if she were a life preserver.

Belinda is the exception among the staff and other islanders who work at the hotel and call Hawaii home in that we get a sense of her desires of a life beyond serving people who see her worth as proportionate to what they need in any given moment. Beyond her and Desmond we don't learn much about The White Lotus staff, which could have added a bit more humanity to an overall chemistry that can feel hamstrung by its studied view of human behavior.

The Mossbacher mealtime conversations are blasé right-wing blurt fests about cancel culture and other conservative talking points presented as a Darwinian defense of their privilege. The callow meanness of these speeches is the point, but they're also draining.

Regardless of that, White has a talent for gifting each of his characters with some true humanity, even the emotionally cannibalistic ones. Nicole is absolutely awful, but there are times when she peels back the armor to show us where the damage is, why she carries it and how it is necrotizing her marriage, and Britton is one of the rare performers who can nail such vulnerability with dead-eyed accuracy.

Coolidge makes Tanya a wonderful tide of sadness with a dangerous undertow, but she and Belinda are such a marvelously "bad for each other" pair of convenience that it's tough to look away. That's a true accomplishment in an era of HBO defined by shows about horrible rich people.

But next to "The Undoing" and "Big Little Lies," and the crazy, operatic substance of "Succession,"  "The White Lotus" is a destination event, a safe, controlled daytrip into disquiet. Some will love the airy cringe that White purveys here, which intensifies as this series goes deeper into its run. Even if the agita gets to be too much to handle, you can still take relief knowing that like all good vacations, it comes to an end exactly how it should, and when it should.