Yet experts disagree whether such shots are necessary: "Unclear" if there's a "firm scientific basis" for boosters 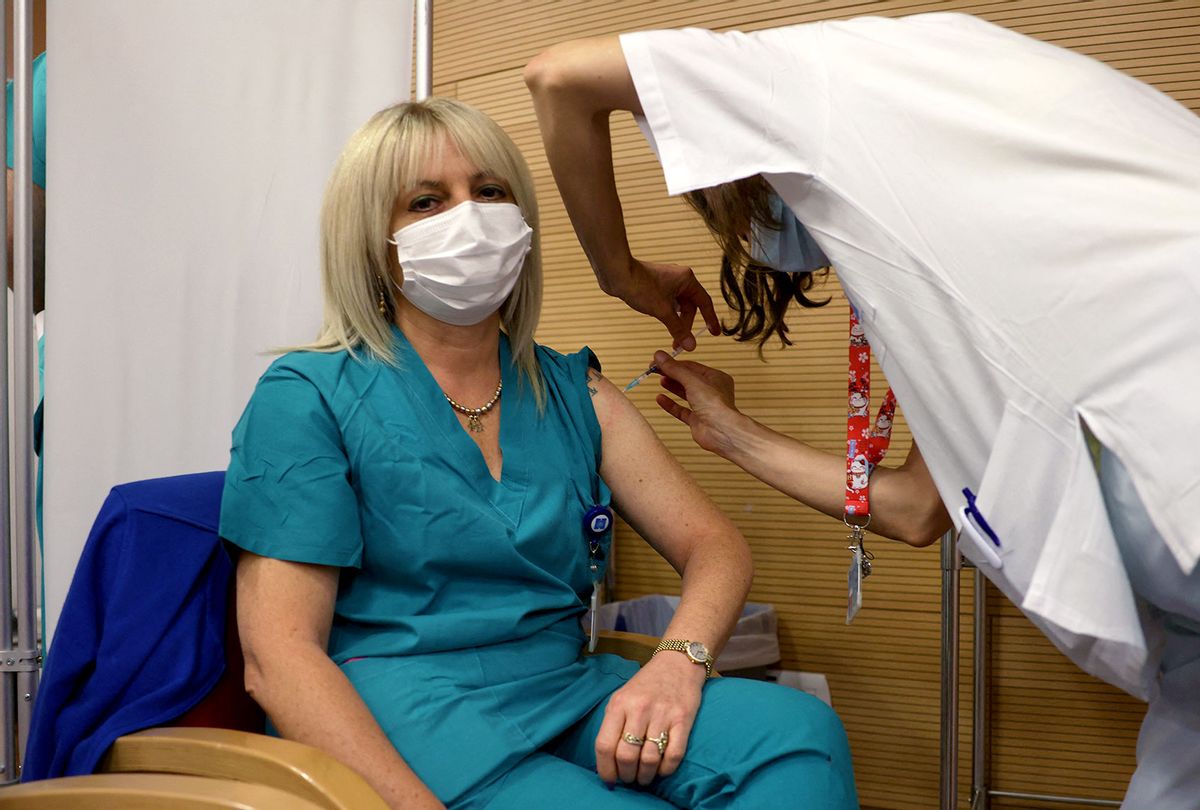 An Israeli medic administers a third booster jab of the covid vaccine to a member of medical teams, at the Hadassah Ein Kerem Hospital in Jerusalem, on August 15, 2021. (MENAHEM KAHANA/AFP via Getty Images)
--

It appears imminent that COVID-19 vaccine booster shots will be available in the coming months, and not just for the immunocompromised.

According to a New York Times report, the Biden Administration is expected to formally announce that all Americans who have been vaccinated, regardless of age, should get a coronavirus booster vaccination eight months after they received their second shot of either of of the two-shot mRNA vaccines.

Those who received the one-dose Johnson & Johnson vaccine may also be approved to receive booster shots, pending the results of a two-dose clinical trial that are expected to be published in the coming weeks.

These additional shots could be offered as soon as mid-September, or once the Food and Drug Administration (FDA) formally approves the vaccines. The FDA is expected to formally approve Pfizer's booster shot in the coming weeks.

Yet not all of the previously-vaccinated will be eligible immediately for booster shots. Rather, the distribution of boosters will be staggered, similar to the staggering of the initial vaccine roll-out; nursing home residents, health care workers and emergency workers are expected to be the first groups to get their boosters.

The Associated Press and the Washington Post corroborated this news, stating that the official booster recommendation might be made as soon as this week.

The news arrives at a moment when COVID-19 cases are on the rise across the country thanks to the highly contagious delta variant. While studies have shown that the vaccines are highly effective in preventing hospitalization and death from the variant, mild breakthrough infections are occurring in many vaccinated individuals. At the end of July, NBC News reported there were 125,000 known breakthrough cases since January, though the reported number relies on data from states whose public health departments report breakthrough cases; since nine states don't report breakthrough cases, the number is likely higher. If accurate, this implies that only 0.08 percent of the vaccinated population has been infected with COVID-19.

What remains unclear is the exact data motivating the Biden administration to make the booster recommendation. The World Health Organization (WHO) recently called for a moratorium on booster shots in affluent countries throughout September. Israel, Germany, and the UK have already approved COVID-19 booster shots for the elderly and those with underlying conditions. San Francisco is permitting those with a Johnson & Johnson vaccine to get a single dose of a two-shot mRNA vaccine as a booster.

"Even while hundreds of millions of people are still waiting for their first dose, some rich countries are moving towards booster doses," said WHO Director-General Tedros Adhanom Ghebreyesus. "So far more than 4 billion vaccine doses have been administered globally. More than 80% have gone to high and upper middle income countries, even though they account for less than half of the world's population."

According to the Washington Post report, data from Israel could be the driving force behind the decision. On Tuesday, National Institutes of Health Director Francis Collins confirmed on The Hugh Hewitt Show that the data on vaccine effectiveness waning over time is concerning and thus builds the case for boosters.

"And so in the Israeli data the people who got immunized in January are the ones that are now having more breakthrough cases," Collins said. "Mostly of course these are symptomatic but not serious, but you're starting to see a little bit of a trend towards some of those requiring hospitalization."

Yet not all infectious disease experts agree that vaccinated Americans need boosters, signaling that the impending announcement will likely stoke controversy. Dr. Monica Gandhi, infectious disease doctor and professor of medicine at the University of California–San Francisco, told Salon via email that she believes the Biden administration should be focused on getting eligible unvaccinated people vaccinated.

"I do not think immunocompetent Americans need an extra booster shot now and I think the US should donate some of its large surplus vaccine supply for global vaccine equity, which will decrease worldwide transmission and the emergence of future variants," Gandhi said. Gandhi said that counts of T cells, a type of antibody that serves as a metric for a vaccines' efficacy, have remained high in patients who were vaccinated months ago.

"T cells protect us from severe disease, and the T cells generated by the vaccines are holding up amazingly well, with over 99% of the hospitalizations being among unvaccinated adults in the US," Gandhi added.

Dr. Charles Chiu, a professor of infectious diseases at the University of California–San Francisco, agreed.

"All of the data available to date show that the vaccine remains extremely effective in preventing hospitalizations and deaths due to COVID-19 – which is the main purpose of getting vaccinated; it would seem as if at present the main purpose of the booster vaccinations would be to decrease transmission of the virus (viral loads in breakthrough infections by delta are comparable to those in unvaccinated cases, suggesting that vaccine breakthrough cases are as infectious as unvaccinated cases)," Chiu said via email. "Nevertheless, I believe that our main focus should still be in reaching out to those who are unvaccinated."

Chiu added there was a preprint released a few days ago that suggested that the Pfizer vaccine may be less effective than Moderna due to higher incidence of breakthrough infections, but emphasized this study hasn't been peer reviewed.

"We always thought that the need for booster vaccinations was a possibility," Chiu said. "However, whether or not there is currently a firm scientific basis for these new recommendations, if they indeed are released by the Biden administration, is unclear to me."