The maligned tubs were a 90s diet stand-by. Up the fat content for a better cottage cheese experience 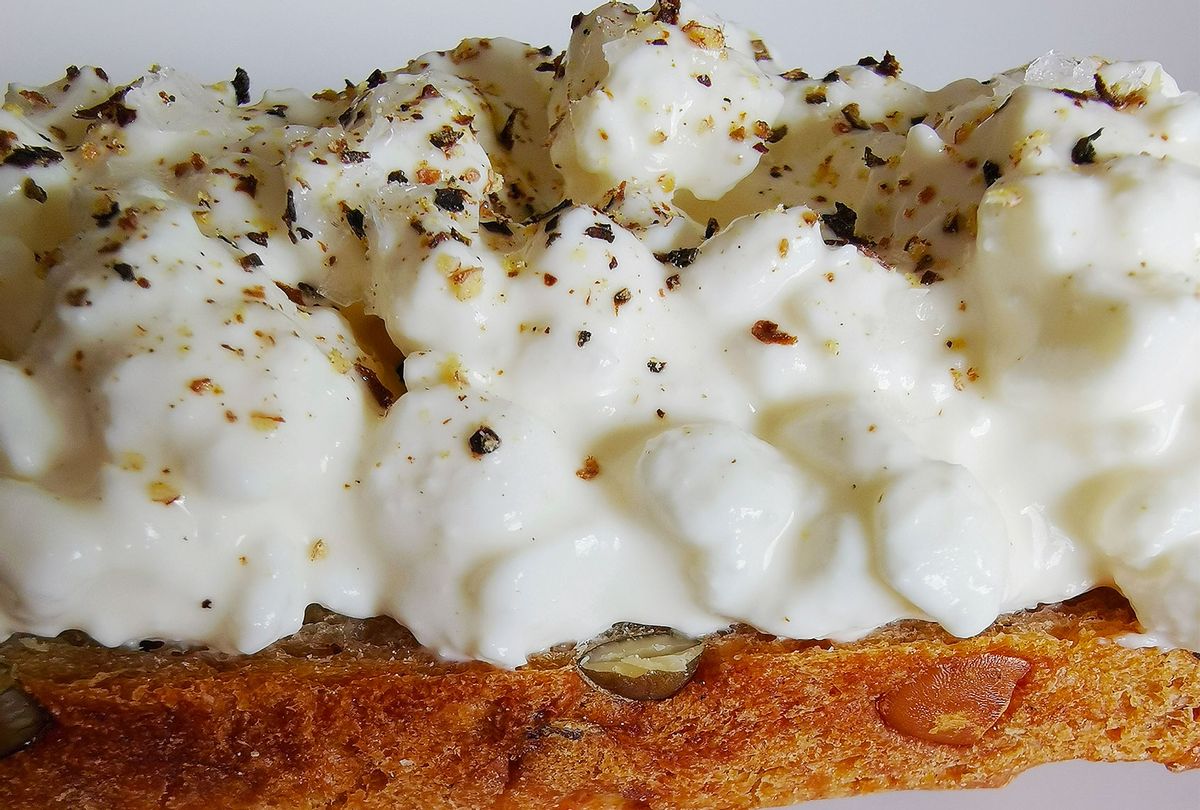 I'm all for granting people their personal likes and dislikes when it comes to food, but if you can see a bowl of mayonnaise-based potato salad and think, "Wow, that looks delicious!" and then turn around and accuse my cup of cottage cheese of looking like milk three weeks beyond its expiration date, we're going to have words.

Cottage cheese, when enjoyed in its full-fat glory, is a culinary treasure. The plump, chewy curds are a canvas for both savory and sweet — a "draw me like one of your French girls" invitation from a snack that is ready to accommodate your every craving. I love mine with flaky salt and freshly cracked black pepper; maybe a drizzle of chili oil when I'm throwing in diced avocado or tomatoes. It's a treat with honey and berries, or a simple spoonful of preserves before spreading it on toast for a creamy, lightly sweetened, lavishly textured bite. I'm also absolutely down for eating cottage cheese straight from its little container with nothing added, just give me a spoon and I'm good.

My love for cottage cheese goes back as far as I can remember. I adored the stuff even as a child in the fat-free-crazed '90s, with a mom who kept our kitchen stocked with nonfat yogurt, skim milk and those awesomely chewy Snackwell's devil's food cookies. I remember feeling excited whenever I'd spot cottage cheese on a salad bar — in hindsight, this is probably because buffet offerings were likely to be the full-fat version instead of the nonfat option we kept at home — but honestly, even 36-year-old me still feels psyched when I see cottage cheese among the offerings of a hotel breakfast.

There's always been something luxurious about those bouncy, tangy little curds.

I'm certainly not alone in my affection for cottage cheese, but since any good argument includes backup, I crossed my fingers and reached out to Christine Clark. She's an ACS Certified Cheese Professional®, so I knew she'd be honest about her feelings toward one of dairy's most divisive offerings. Like me, Clark grew up with cottage cheese as a mainstay in the family fridge, and while she enjoyed it with salsa or black pepper for a quick snack, she admits that it wasn't always her favorite.

"I hated the combination of fruit and cottage cheese then and still do today," says Clark. "It reminds me of fruit when it's just starting to rot."

While I disagree, I can understand. We all have our preferences when it comes to food pairings, and Clark happens to prefer her cottage cheese on the savory side, citing late summer tomatoes as a "heavenly" accompaniment. On that — and the need for fat content — we most certainly agree.

"I look for full-fat cottage cheese," confirms Clark. "2% fat sounds very lean and healthy, but full-fat is only 4%. We can go up to 4%. It adds flavor, a silkier texture, and the fat helps keep you full."

That fat, though, may have been what started this whole debate.

I've long suspected that cottage cheese's unfortunate reputation today can largely be attributed to the aforementioned diet culture of the 1990s. The high protein content and lack of sugar — and, in many cases, lack of fat — made cottage cheese an easy choice for those in pursuit of a slim physique, and now we're collectively scarred by the youthful memory of someone in our lives pretending to enjoy their bland, white blobs atop a limp lettuce leaf in the name of "health."

Nonetheless, we're adults now. And because cottage cheese is so versatile, when I listen to others accuse it of being lumpy (which, fine, it is!), tasteless, weird, gross, insert-your-derisive-descriptor-of-choice-here, it's hard to grasp the aversion.

It may be true that we eat with our eyes first, but since the same individual who lambasts cottage cheese for "looking gross" is often the first to scoop from a bowl of mayo-soaked chunks of potato or egg, there's no way the disdain stems from appearance alone.

April Blake, a mayo-munching food blogger, begs to differ. "I haven't eaten cottage cheese in years," she told me. "The lumpy, curdled look is probably 90% of why I think it's gross, despite my not being able to remember what it tastes like."

What's that they say about not judging a book by its cover? Ouch.

Though cottage cheese needs no one's pity, I must ask: If you're anti-cottage cheese, are you also opposed to other soft, fresh cheeses? For the sake of your own taste buds, I hope you don't scoff at ricotta or turn your nose up at an oozy burrata.

Alas, it's your choice. If it's been years since you last gave cottage cheese a try, however, I implore you to open your heart and give it another chance. The real beauty of cottage cheese — indeed the root of its versatility — lies in its simplicity. Of humble origins, the precursors to cottage cheese were, as its name suggests, very much homemade. They "constituted an important category in the group of simple so-called 'bag cheeses' (drained in a cloth bag), all of which were suitable for making in cottages," writes Alan Davidson in "The Oxford Companion to Food."

Given its commercial perfection prevalence today, most of us who eat cottage cheese are probably not making it in our own abodes, which means we aren't able to control the outcome of the final product. Thus, we must find one we can enjoy off the shelf, and the two key elements that I believe should be considered when making your grocery store selections are fat content and curd size.

As discussed, go for the full-fat stuff! It's more satisfying in your mouth and in your stomach. Next, look for a large curd. This may take some trial and error as the depiction on the container is unlikely to be an accurate representation of the real thing, so don't be afraid to try different brands. Great cottage cheese is far less about the brand than it is about the contents. In fact, my favorite cottage cheese here in Germany is the store brand of a nationwide grocery chain — you really can't judge this book by its cover.

I've included photos of three varieties of cottage cheese, which I've eloquently referred to as either plump, wet, or mushy. (I shall also acknowledge that cottage cheese is not the most photogenic food.) 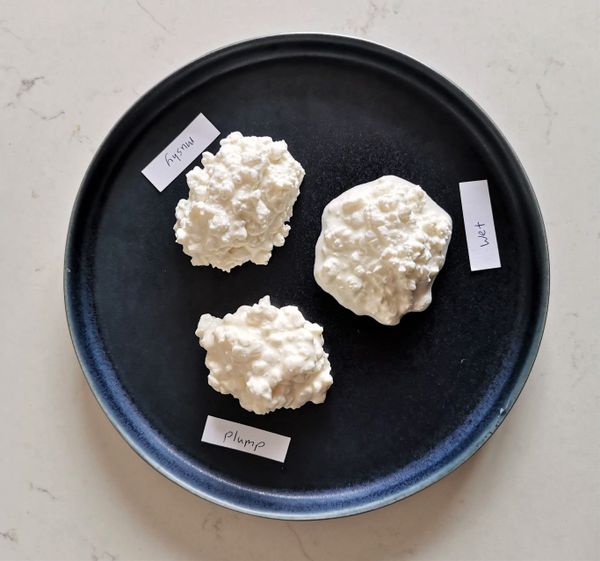 We want the plump curds, dear reader. Notice the cohesion, the lusciousness. These springy curds and creamy texture will prove that cottage cheese is actually a treat. 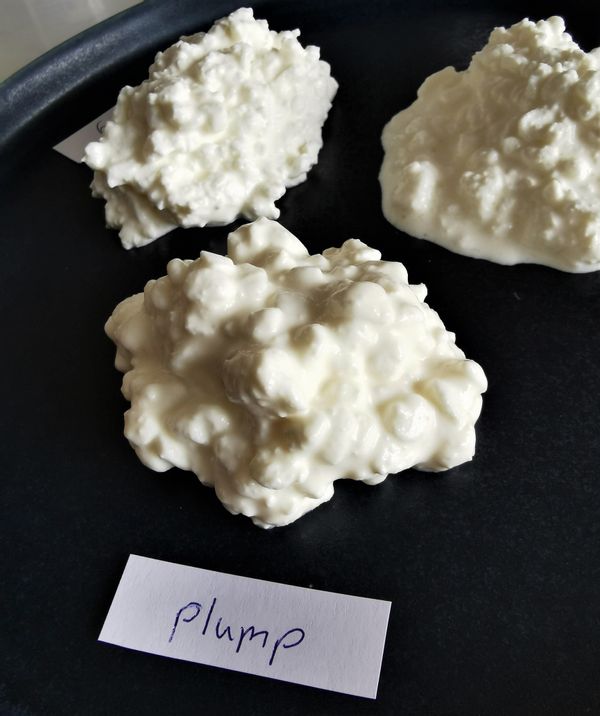 A cottage cheese that is too wet may still taste good — and may even contain large curds — but this style tends to be less visually appealing, and things can get awfully soupy when mixing with tomatoes or other juicy toppings. 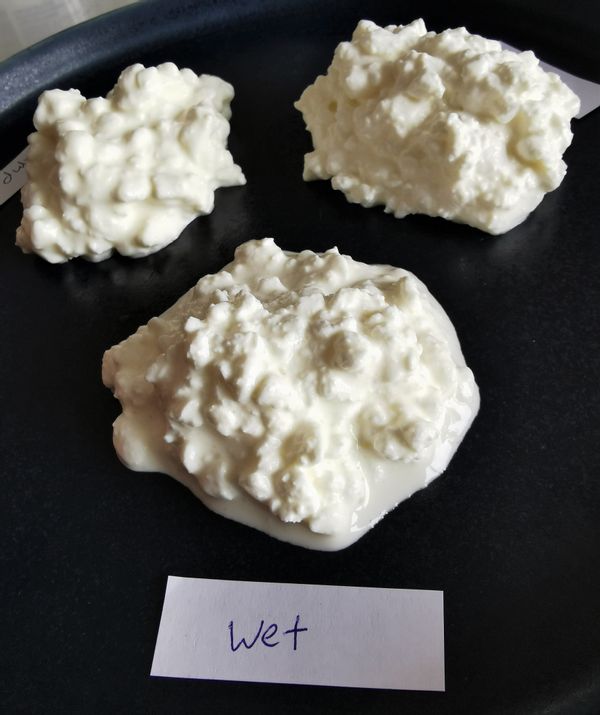 Finally, a mushy cottage cheese is usually characterized by its small curds and sometimes a lower moisture content. It doesn't look as appealing and the mouthfeel can be off-putting. "The really tiny curds can sometimes feel pre-chewed in a way that grosses me out," says Clark.

While the example shown here is actually pretty OK, if you buy a cottage cheese and peel back the lid to reveal a paste of small chunks rather than discernable curds, try again. 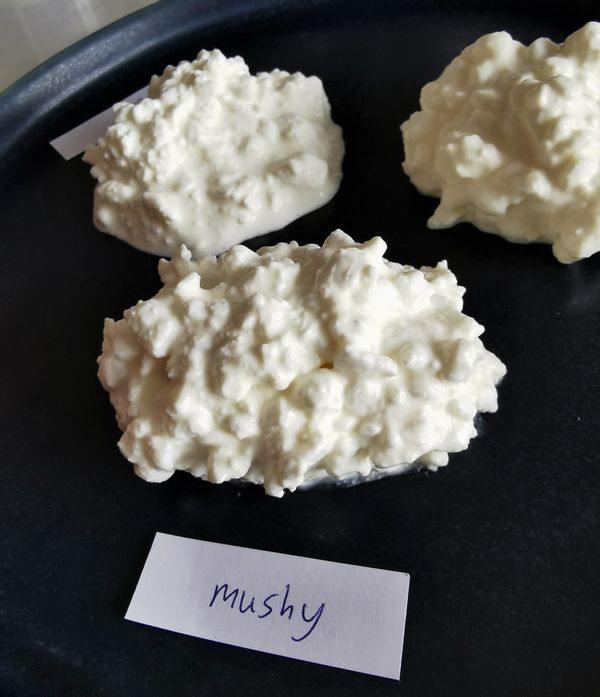 Cottage cheese is a journey, and it may take a few tries to find your ideal combination of curd size and creaminess — but I promise it'll be worth it to find your favorite. Now, if you'll excuse me, I have three open containers of cottage cheese that need my full attention.

Summer is a freelance food and travel writer based in Nuremberg, Germany. Find her on Twitter or Instagram at @summeroutside