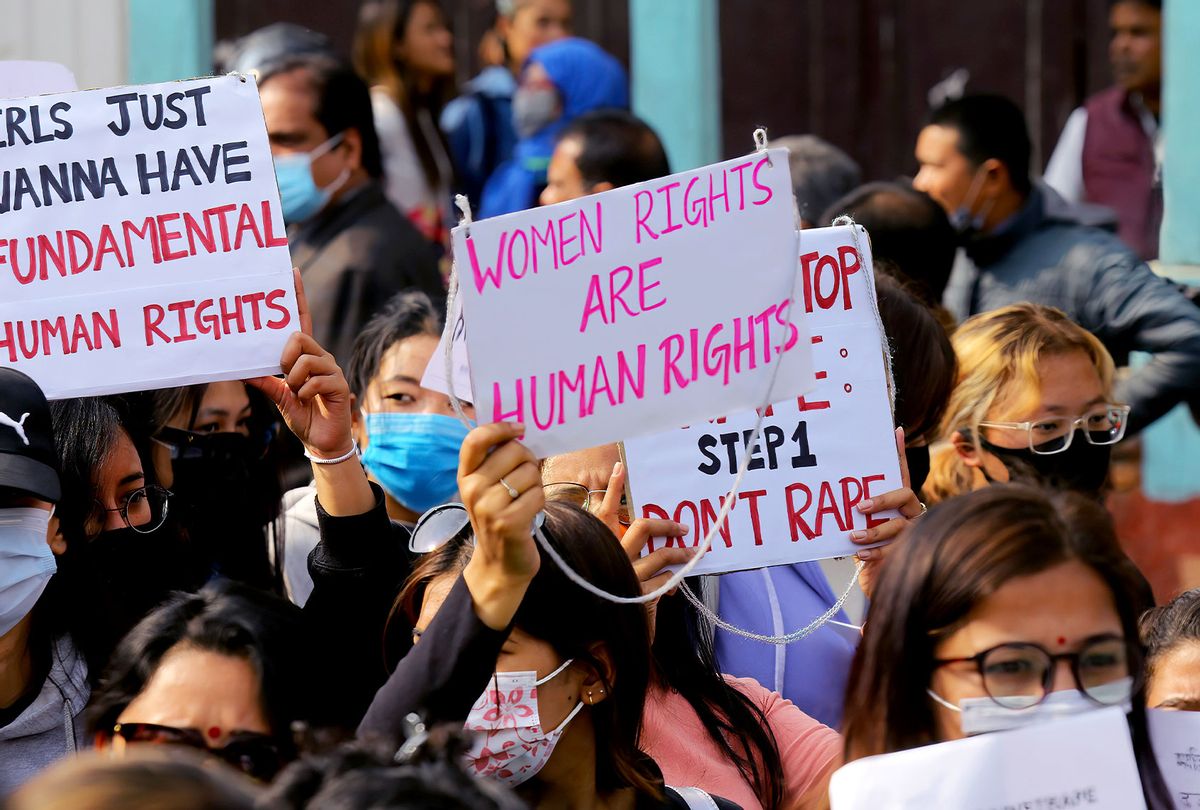 Earlier this month, the House of Representatives passed a historic budget that didn't include the Hyde Amendment, a budget rider that's severely restricted coverage of abortion care by withholding federal funding since 1976. Of course, the gift of hindsight shows us celebrations of this monumental moment proved slightly premature, when it was quietly undone with a single stroke on Aug. 10.

By a narrow margin, determined as ever to deny us good things, the US Senate adopted an amendment to restore Hyde to the budget, and usher in yet another year of abortion care being all but banned for those who are struggling financially. Today, despite the relative quietness and feelings of helplessness attached to this loss for reproductive justice, we're closer than ever to eliminating Hyde, and there's too much at stake — especially for many victims of domestic abuse — to give up now.

The repercussions of Hyde through the years have proven devastating, despite how the policy has often been treated as something as a third-rail issue for the majority of politicians who are still struggling to string together the words, "a woman's right to choose," let alone acknowledge how economic barriers have rendered this "choice" inaccessible for many. Among pregnant persons on Medicaid who are unable to afford an abortion, Hyde forces one in four of them to carry an unwanted pregnancy to term. And, as the well-known research of a study called the Turnaway Study has shown, there are long-term consequences for people who are unable to get the abortion care they seek — who are unsurprisingly more likely to be people of color, low-income people, and those who are already marginalized by the health system.

But in addition to making those who are denied abortion care four times more likely to be pushed into poverty, the Turnaway Study found being forced to keep an unwanted pregnancy also increases the risk of being entrapped in an abusive relationship. Another study found that more than a tenth of people who seek abortion care do so because their partners are abusive, and people experiencing domestic abuse are more likely to remain in violent situations if they carry their pregnancy to term. Demographer Diana Greene Foster, the author of the Turnaway study, told Salon a few years ago that "being unable to have the abortion tethered women to violent men, while women who have the abortion were more able to escape abusive relationships."

From Hyde, to state and local-level bans, to rising criminal ordinances on abortion, all restrictions on reproductive health care carry specific and significant impact on victims and survivors of abuse. The connection between the seemingly separate issues of reproductive care, consent and autonomy becomes obvious when you connect the dots. Domestic abuse and abortion bans extend from the same well of rampant gender-based violence in society and politics — and even more dangerously, in our health system.

Forced pregnancy as a triggering violation of consent

To state the obvious, all abortion bans and barriers are an insidious violation of consent, especially for those who have experienced some form of sexual harm or coercion beforehand. By the twisted logic of anti-abortion zealots who see women as subhuman, consent to sex is falsely equated with consent to pregnancy, ignoring how forced pregnancy and birth can be a deeply traumatic violation of someone's body, not unlike being subject to sexual violence.

As more and more particularly extreme state abortion bans — like the recent Texas law that empowers local narcs to sue those who have or help someone have an abortion — draw attention for not offering exceptions for rape, it's worth listening to survivors and recognizing how these exceptions can do more harm than good for victims, anyway.

Think about it this way: Rape exceptions to abortion bans are more likely to help anti-abortion lawmakers, because lawmakers can performatively cite these exceptions to depict their laws as less cruel and extreme than they are. Rape exceptions also imply that rape is easy to report and "prove" to police or medical professionals — this is demonstrably false, to put things lightly. In reality, rape exceptions simply make access to health care conditional on whether survivors can prove their trauma to medical or law enforcement institutions, which both have long histories of dismissing or covering up sexual violence they perpetrate.

And as states pass a historic number of abortion bans and restrictions this year, another connection between attacks on reproductive rights and domestic abuse is brought into the fold: reproductive coercion between intimate partners, which could include tampering with a partner's birth control and condoms, or otherwise controlling their reproductive decisions and abilities. When state lawmakers exert control over the bodies and reproductive health options of pregnant people, they act to normalize such behaviors, which are often reproduced by abusers in their relationships. One 2010 study found 15% of women who report experiencing physical violence from a male partner also report birth control sabotage.

The gendered violence enacted by federal and state abortion policy

Just as anti-abortion lawmakers tacitly endorse reproductive coercion by practicing this behavior in their legislation, when these same lawmakers equate abortion care with murder, they may incite retaliatory and inherently gendered violence against those purportedly responsible: abortion providers and their patients. Words have consequences, and in this case, the consequence can be gendered violence.

Protesters outside abortion clinics have been known to stalk, harass and dox clinic staff and patients, or even out abortion patients to their partners or family members who may be abusive. In a number of well-documented cases, they've committed arson or murdered providers.

The synergy between anti-abortion stigma, cultural disdain toward pregnant people, and American policymaking has yielded a crisis of gender-based violence, and not just outside clinic doors. Unsurprisingly considering ICE's whole thing is essentially racist regulation of the US population, the agency has been exposed for acts ranging from forcing detained migrant youth — many of whom are victims of sexual violence, sometimes victimized in ICE detainment centers — to carry unwanted pregnancies, to allegedly carrying out nonconsensual sterilizations on hundreds of migrant women.

Law enforcement agencies similarly target and surveil the pregnancies of people who are citizens, and often weaponize feticide laws — laws which were created to protect pregnant people from domestic violence — to instead work against the pregnant person. Case in point: In 2019, Marshae Jones miscarried after being shot in the stomach, and was briefly jailed for manslaughter, which feels like a twisted, perfect metaphor for "pro-life" politics at large.

Feticide laws and other policies that supposedly "protect" pregnant people and domestic abuse victims instead have led to criminal charges for people who experience miscarriage, stillbirth, self-induce their own abortions at home, or face any other pregnancy complications, a UC Hastings Law study concluded. The War on Drugs was particularly weaponized against Black pregnant women suspected of substance use, and today, people of color are disproportionately policed, and in some cases jailed for their pregnancy outcomes.

The punishment and neglect of pregnant people and survivors of sexual violence, and especially those of color, is mirrored in the gendered cruelties of our capitalist health system. The US maintains the highest maternal death rate in the industrialized world, with significantly higher rates in states with more restrictions on reproductive care, and particularly high rates for women of color: Black women are three to four times more likely than white women to die from pregnancy-related complications.

On top of this, many health providers fail to provide trauma-informed options for essential, life-saving reproductive care like pelvic exams and pap smears, which can be highly triggering for survivors of sexual harm. This lack of options for victims, or really even cultural cognizance that this is, in fact, an issue, speaks to the intersecting ways survivors and pregnant-capable people are harmed by the health system.

In many if not most cases, patients who have experienced sexual trauma aren't even asked about their levels of comfort with pelvic exam services, or what would help them feel safer in having these services. Like the aforementioned, dangerous outcomes pregnant people face, this absence of even basic consideration of the fact that survivors exist and, hey, are probably going to need a pap smear at some point, stem from societal failure to connect gender-based violence prevention with reproductive health care accessibility.

Race, poverty and inaccessible abortion as risk factors for abuse

Like pretty much everything else in this world, vulnerability to the intersections of sexual violence and barriers to reproductive care isn't identity-neutral. The Hyde Amendment specifically reveals how socioeconomic status and poverty are weaponized to control and coerce the reproduction of low-income people. Consequently, Hyde also shows how the state has made poverty and race essentially become risk factors for gender-based interpersonal violence.

In the 1970s, Rep. Henry Hyde, the namesake of the notorious budget rider, proudly walked us through his Evil Plan to design a bill that would specifically ban abortion for poor people and people of color. Congress' renewal of the unapologetic white supremacist's amendment each year since speaks volumes about how little has changed for pregnant people and survivors of color in the last decades.

At the height of the COVID-19 pandemic last year, poverty and barriers to health care increased exponentially, and unsurprisingly, so did cases of domestic violence, when families around the world were confined to their homes, granting domestic abusers more power than ever. Victims of domestic abuse who feared losing shelter or health care, or experienced an unwanted pregnancy but couldn't access abortion or birth control in the COVID-strained medical system, found themselves entrapped in abusive situations.

There are many factors that have created this devastating reality that's still unfolding around us, from the brutality of the for-profit health system, to the crisis of unaffordable housing, to the recklessly mismanaged pandemic, and the broad inaccessibility of abortion. But the Hyde Amendment is what binds the seemingly disconnected issues of pregnancy, domestic abuse, poverty, and the global health crisis. It's the through-line that connects all of this shameful and inherently racist, gendered violence. Hyde and any policies that create financial barriers to abortion care form the chokehold of financial insecurity and patriarchal control that can tie vulnerable pregnant people to abusers for a lifetime.