“The world is a precarious place”: How PBS' “Generation 9/11” tells a tender coming of age story

"They’re growing up in a world where there's a base layer of distrust," PBS' "Generation 9/11" director tells Salon 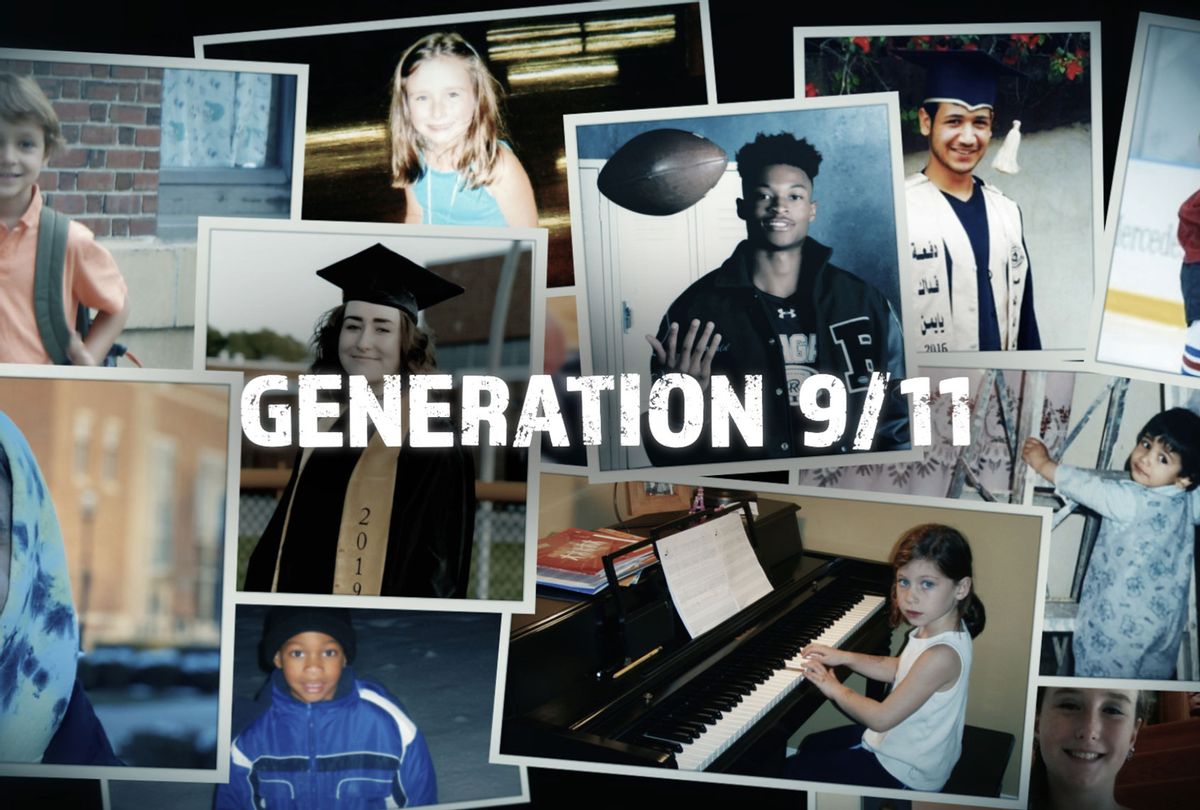 In "Generation 9/11," a PBS documentary that commemorates 20 years since the devastating terror attack, seven young people whose fathers died on 9/11 before their children were born, share their stories. Today, these young subjects – Megan, Ronald, Dina, Claudia, Fares, Nick, and Luke — are 19 or 20 years old and reflect on how losing someone they never met to a national tragedy shaped the course of their lives, and even their politics.

Megan, whose late father had been a firefighter, at one point describes the complex emotions she feels every 9/11 anniversary. "I don't mean to sound ungrateful but it's weird for me when on the day, so many people send me messages like, 'I'm so sorry, thinking of you today,' when I'm just, like, alright, I wasn't really thinking about it until you flooded my inbox," she says.

"Generation 9/11" wades into new territory for media depictions of the attack, which often fixate on its devastating toll, when, as Megan points out, the lives of people like her who remain personally close to 9/11 are more human, complex and fluid than they are purely tragic, at this point.

"I'd seen a few children of 9/11-type stories, and they're very moving but also feel a bit like sometimes we're sort of wallowing in misery, and I didn't want to make that kind of film — no one wanted it to be that," director Liz Mermin told Salon.

Mermin decided not to show images of the destruction or planes, instead keeping a "light touch with all of the 9/11 footage." She says, "The most emotional parts of the film are the videos of the dads, and that footage was just so beautiful and moving, and really says it all about loss."

"Generation 9/11," which almost feels like a tender coming-of-age story, intimately balances the generational and personal impacts of 9/11 on a group of young people who are uniquely connected in loss. The documentary broadly explores a new generation's experience as the first group to know 9/11 as history rather than memory.

Beyond yet again memorializing the victims of the attack, as plenty of 9/11-related projects have already done, "Generation 9/11" presents the now-young adult lives of the then-unborn children of the victims, and in doing so, it looks to the future. At one point, Nick, whose father died while working in one of the Twin Towers during the attack, declares he's "tired of living through historical events," and indeed, the post-9/11 generation feels it has been put through the wringer.

As Mermin's documentary explores, Gen-Z and especially those born after September 11, 2001, have lived through the historic election of President Obama, the slaying of al-Qaeda leader Osama bin Laden, the Sandy Hook and Parkland school shootings, the 2016 and 2020 elections, and of course, an ongoing global pandemic. Mermin says the documentary focused on these particular moments because they're the main ones the seven subjects actually have memories of and thoughts on.

While "Generation 9/11" looks closely at how these particular events affected the subjects, and how 9/11 may have shaped their experiences of these moments, the documentary also reminds us that post-9/11 zoomers continue to live through daily, historic change — like, say, impending climate catastrophe. At one point, Ronald, a subject living in San Antonio whose late father served in the military, cleans snow off of his car and asks, "How can people see this and still say climate change isn't real?" Megan later voices her frustration that Americans "had one job" to curb the pandemic by staying home and wearing masks, and still somehow failed.

What connects the subjects of "Generation 9/11" in addition to the shared loss of their dads is that for their generation, the world continues to change seemingly for the worse every day. Mermin recalls the subjects saying they were told before they were born, you didn't have to take off your shoes at airport security checks, and there weren't always school shooting safety drills.

"What's really new that we shine a light on is, they're growing up in a world where there's a base layer of distrust. I didn't grow up thinking a suicide bomb might go off on a plane," she said. The documentary subjects, each vastly unique in their own ways, are connected by "some inherent sense of the world as a more precarious place, anything could happen at any time."

"'Anything could happen at any time, focus on the things that matter' — that's a line that comes out of a lot of their mouths," Mermin said.

"A bigger picture than just seven people with a tragic story"

Little else displays the young subjects' fascinating differences in upbringing and cultural background like their political beliefs and personal aspirations.

Dina, whose mother advocated against the wars overseas and visited and stood in solidarity with Afghan widows, is eager to show the documentary crew the Ruth Bader Ginsburg candle she keeps in her dorm room. She expresses that she wants to become a sex educator, bemoaning the lack of quality sex ed her generation grew up with.

Luke, who hails from a Texan military family, lost his mother a year after his father's death in 9/11, and aspires to continue his family's legacy by joining the military. At one point, he defends the profiling of people perceived to be Muslim in airports, because "there are a lot of bad people in the Middle East," and also questions the veracity of the 2020 presidential election, or whether the insurrectionists on Jan. 6 may have included Democrats posing as Trump supporters. Nonetheless, he shares his fellow subjects' concerns about the prevalence of gun violence and fears of explosive political division.

Claudia, who at one point poses before a Blue Lives Matter flag flying on her family's porch, criticizes the flaws and tragedies of the criminal justice system and expresses her wish to go to law school and help correct this.

Fares grew up in Yemen with his mother shortly after the death of his father, who safely evacuated the collapsing towers on 9/11 but died after he returned to help others. Fares survived civil war in his home country, before returning to the U.S. and working at his local mosque in a Muslim community in Michigan.

"We all thought at first he would talk about Islamophobia or America under Donald Trump — we thought we would get this voice that was nothing like the voice we got from Fares," Mermin said. Instead, Fares didn't address Islamophobia at all, and rather than express interest in politics, he broadly criticized all politicians as "equally rotten."

"He's not your stereotypical anything, he is who he is, he's got his own views, and they start to make sense as you get to know him," she said.

In fact, none of the "Generation 9/11" subjects are what you might expect of young people who have experienced such profound and unique loss. It's the blend of their different stories and a shared collective experience that make the documentary what it is.

"We weave their experience together, and it gives you a much bigger picture than just seven people with a tragic story," Mermin said. "That's the thing I'm happiest about with the film — any one of these individual stories is interesting, but it's just one story. Somehow there's a wonderful alchemy that comes from the way these seven stories interact."

"It's amazing how fresh it is in their minds"

"Generation 9/11" wouldn't have been possible without building trust and meaningful connections with the subjects and their families. Over the months spent choosing the seven subjects, Mermin says they were as transparent as possible about the significant vulnerability that would be required of the subjects if they participated.

"Were they comfortable going there? Did they want to have these conversations with their families? Did they want to explore these big questions about how you grieve someone you've never known, go into that personal stuff, and also speak on their generation?" Mermin said.

Before she could even begin interviewing Fares and his older brother in their home, Mermin recalls how their mother cooked a "whole feast" for her and the crew. "She wouldn't let us do any interviews until we'd sat down and ate with the family."

Mermin says she felt especially connected to the subjects' mothers, the women who lost their partners on that fateful day.

"I was very moved by each one of them and their mothers, their mothers' openness, honesty and willingness to go back and open those emotional wounds to tell the story of the day," she said. "It's amazing how fresh it is in their minds, an unbelievably traumatic event that's been coming on 20 years, and their memory is so vivid. They want people to remember their real stories and more than the statistics, and that's why they were willing to go there."

However different each of the subjects' families and relationships may be, they all share a deep level of closeness that stems from relying on each other after 9/11. Dina expresses deep gratitude for the birth of her younger half-sister after her mother's marriage to her stepfather after 9/11. Claudia and Megan say their sisters are their best friends, a closeness forged by shared loss and need to take care of each other.

But Mermin says one of the most powerful impacts of the documentary has been its effect on the subjects' relationships with their mothers. As Megan describes her complicated feelings about the rush of texts she receives each 9/11 anniversary, she admits that she "feels like that's more for [her] mother."

All of the mothers interviewed have always told their kids to come to them with any questions about anything: 9/11 or the past. "But they say the kids never ask anything," Mermin said. "They say they're waiting for them to ask."

In contrast, in separate interviews, the kids revealed they don't really know what to ask their mothers, or how to ask. "They said, 'I know it's upsetting for her, it's difficult, it never feels like the right moment to bring up something that traumatic and personal,'" Mermin said. "There's an enormous mutual respect and support and concern that I've seen between kids and their parents. That's led to a hesitancy to talk about the past. For some of them, this documentary was really an opportunity to talk to each other in a way they never have."

It's ultimately fitting that the making of "Generation 9/11" brought people together, even if just mothers and their children, when chief among the subjects' concerns for the future is corrosive division in America. Someday, Mermin hopes the seven subjects, and the vast spectrum of politics they encompass, will find each other and get together.

"I feel the young people on the right and the left have much more in common than they realize, but they need to bond about something beyond politics, first," she said. "I hope through the subjects, who would get a lot out of being in a room together, we find what what we have in common, for them especially as a generation, is so profound."