McCarthy warns Big Tech against cooperating with Jan. 6 committee: "Republicans will not forget" 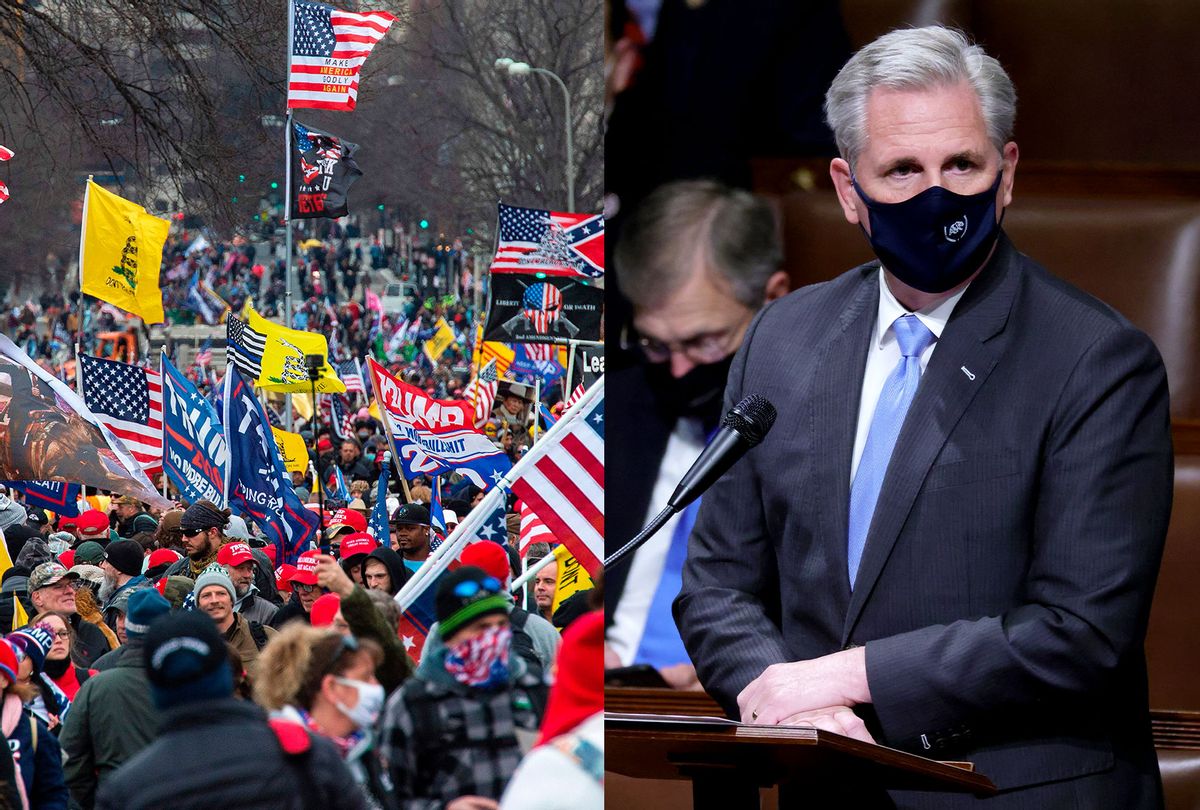 A House Select Committee is requesting that nearly three dozen telecommunications companies preserve the phone records of Donald Trump, his family, and various GOP members of Congress as part of its probe into who fueled the fatal insurrection on January 6.

The companies targeted include, among others, At&T, Google, Verizon, Facebook, and Apple. Every one of them has been asked to "preserve metadata, subscriber information, technical usage information, and content of communications for the listed individuals."

The names of those individuals have not been made public, but the requested information will range from home addresses, IP addresses, and credit or banking information to online purchases, emails, and text messages. Sources familiar with the matter affirmed to CNN that the names in question include several members of Congress who played some part in the "Stop the Steal" rally.

Among the lawmakers set to be scrutinized include Reps. Lauren Boebert, R-Colo., Marjorie Taylor Greene, R-Ga., Madison Cawthorn, R-N.C., Jim Jordan, R-Ohio, Andy Biggs, R-Ariz., Paul Gosar, R-Ariz., Mo Brooks, R-Ala., and Matt Gaetz, R-Fla. All of them have in some way pushed Donald Trump's baseless claims of election fraud, which Democratic lawmakers have repeatedly argued were the basis for the Capitol riot.

It remains unclear what legal maneuver or mechanism will be used to compel the companies to hand over their records. CNN noted that the Democratic-led committee has subpoena power.

In addition to legislators, the panel is also asking the telecommunications giants to retain the records of people already charged by the Justice Department for their effort to "to challenge, delay, or interfere" the Electoral College's certification of President Biden's win.

The request is the panel's third major move in recent days. Last week, the House select committee requested documents and data from eight federal agencies, including the National Archives, the Records Administration, the Justice Department, and the FBI. The committee also made a preliminary request last week to various social media companies.

The committee's latest maneuver has been widely mocked by a number of Republicans, particularly those targeted in the offensive.

He tweeted on Monday: "1 Total waste of taxpayer money. 2 Boredom for who looks at my records. 3 Russian Collusion Hoax 2.0. Why not subpoena Socialists who support BLM & ANTIFA?"

House Minority Leader Kevin McCarthy, R-Ca., lobbed threats at any company who complies with the panel's request, warning that "a Republican majority will not forget."

Rep. Greene took McCarthy's rhetoric a step further, saying that the companies will be "shut down" if they bend to the panel's will.

"These cell phone companies, these telecommunications companies, they better not play with these Democrats," Greene said during a Fox News interview this week. "Because Republicans are coming back into the majority in 2022 and we will take this very serious... if they go along with this, they will be shut down. And that's a promise."

The committee consists of nine legislators, including seven Democrats and two Republicans – a result stemming from McCarthy's decision back in July to pull all of the Republican picks from the panel. McCarthy has instead said the GOP will "run [its[ own investigation."