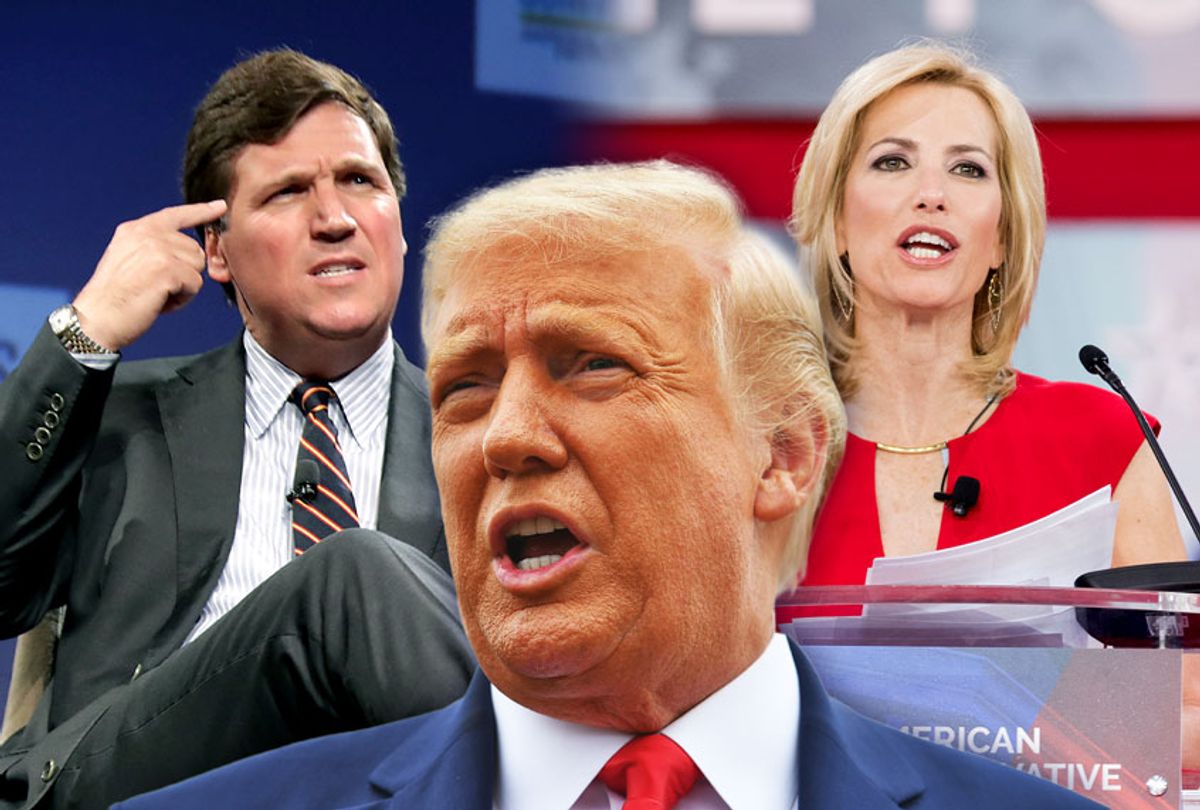 It has been obvious for some days that the right-wing is preparing a major pivot from hand wringing about Joe Biden's alleged betrayal of Afghan refugees to hand wringing about all the Afghan refugees he brought into the country to kill us all in our beds. I wrote about the early shifts in perspective last week and it's starting to come into full focus now that the military evacuation is over. Right-wing fear-mongering about immigrants and refugees is as predictable as Republican voter suppression.

Fox News celebrity Tucker Carlson has made the evacuation of refugees part of his Grand Unified Theory, The Great Replacement, whereby Joe Biden and the Democrats conspired to bring these foreigners to America in order to supplant good, pure white people and dominate the American culture and politics. Carlson is influential in right-wing circles but while his argument feeds into their sense of grievance, it may be a bit esoteric for many of the folks in his audience. Former president Trump's top immigration adviser Stephen Miller makes it more explicit and folds in some of the old "welfare queen" arguments, complaining that the refugees will get benefits and it would be cheaper to settle them in Pakistan, which he thinks proves this is all about an "ideological objective to change America."

House Minority Leader Kevin McCarthy, R-Calif., edged toward what is going to be the ultimate argument when he said this on Monday:

Knowing that they said they took more than a 120,000 lifts with only 5600 being American, I I think we should look through and screen before people come to America. We've got to make sure what's in there.

When asked if he thought it was OK for these Afghan refugees to settle in the U.S., McCarthy replied "after we get the screening it's a whole different question" which isn't exactly responsive. But then he's made his position clear before. According to the New York Times, he told a bipartisan group of House members last week, "we'll have terrorists coming across the border."

He knows his base. After all, back in 2016, Donald Trump had promised to repatriate all the Syrian refugees who had been fully vetted and already settled in the U.S. simply because you just can't trust 'em. He wanted to send Congresswomen Ilhan Omar, Rashida Tlaib and Ayanna Pressley "back to where they came from" even though they are all American citizens, the latter two having been born here. (Not that that matters, he wanted to end birthright citizenship as well.)

As I noted last week, Trump himself has wavered between needling President Biden by pretending to care about the Afghans left behind and accusing the administration of allowing terrorists into the country. But on Monday, he told Fox News' Stuart Varney, "We should have hit that country years ago, hit them really hard, and then let it rot" so it's hard to believe any protests of concern for the Afghan people. It's just not in him. I think we can expect him to jump on the "terrorist" bandwagon 100% from now on.

All signs point to the GOP believing that it can turn the "Biden screwed up Afghanistan" into "Biden brought the threat of terrorism back to the U.S." And the whole thing fits neatly into their overarching worldview that they, and the U.S., have been humiliated at the hands of "the other" whether it's a foreigner or devious Democrats stealing the election right in front of everyone. This is the same worldview that brought us the deranged mass shooters with their Great Replacement-style manifestos and screeds about Jews and caravans — and the violent events of January 6th.

All the screeching about phantom Afghan terrorists will end up inflaming the real would-be terrorists who live among us — and they are plenty inflamed already.

All over the country, we are seeing anti-vaccine and anti-mask protesters explode into full-blown hysteria over the idea that kids might be required to get vaccinated and wear masks when they come to school. Dress codes and vaccines are already commonly required in public and private schools and have been for many decades. Now they are an infringement on the fundamental freedom of their parents to be irresponsible fools with their own families and the families of others. And they are getting more and more violent in their rhetoric:

It isn't entirely unprecedented for GOP candidates to promote violence in recent years and be richly rewarded for it. One of them became president of the United States. You may also recall that a congressional candidate by the name of Greg Gianforte was even arrested for assaulting a reporter a couple of years back. He is now the Governor of Montana. But the myriad threats against local officials such as public health officers and school board members in the last year is an escalation of political violence on a new and much more intimate level than we've seen. Across the nation, aggrieved right-wingers are intimidating officials with the words "we know where you live, we will find you" and targeting at their homes.

And while most Republican officeholders are more or less standing back and allowing this to happen out of cynical self-interest, some are saying the quiet parts out loud themselves.

Congressman Madison Cawthorn, R-N.C., told a group of constituents the other day that  "if our election systems continue to be rigged and continue to be stolen" there is going to be bloodshed and he really doesn't look forward to taking up arms against other Americans.

History Professor Ruth Ben-Ghiat defined what is happening in stark terms on "All in with Chris Hayes" on Monday: "Authoritarianism is when thugs and criminals become the lawmakers." Hussein Ibish, Senior Resident Scholar at the Arab Gulf States Institute in Washington, made a startling observation about this turn of events in The Atlantic:

Decades of living in, studying, and writing about the Middle East have taught me that whenever a political faction becomes obsessed with violent rhetoric and fantasies, brutal acts aren't far behind.  And while there's always been a strain of militancy on the American right and left fringes, there is something unmistakably new, and profoundly alarming, about the casual, florid, and sadistic rhetoric that is metastasizing from the Republican fringe into the party's mainstream.

The truth is that the violent rhetoric and fantasies have been there for quite a while, it's just that they were channeled into wars on foreign soil like the tragic 20-year quagmire that ended this week. And soon they will no doubt be directed at the new immigrants from Afghanistan as "floridly as ever. The American right-wing has always found somebody to hate. But if Trumpism is defined by one unique characteristic it's that it feels free to direct its violent rhetoric against fellow Americans in ways we have not seen since the Civil War.