While incompetence and ruthlessness aren't good things, at least these vamps bloody well get things done 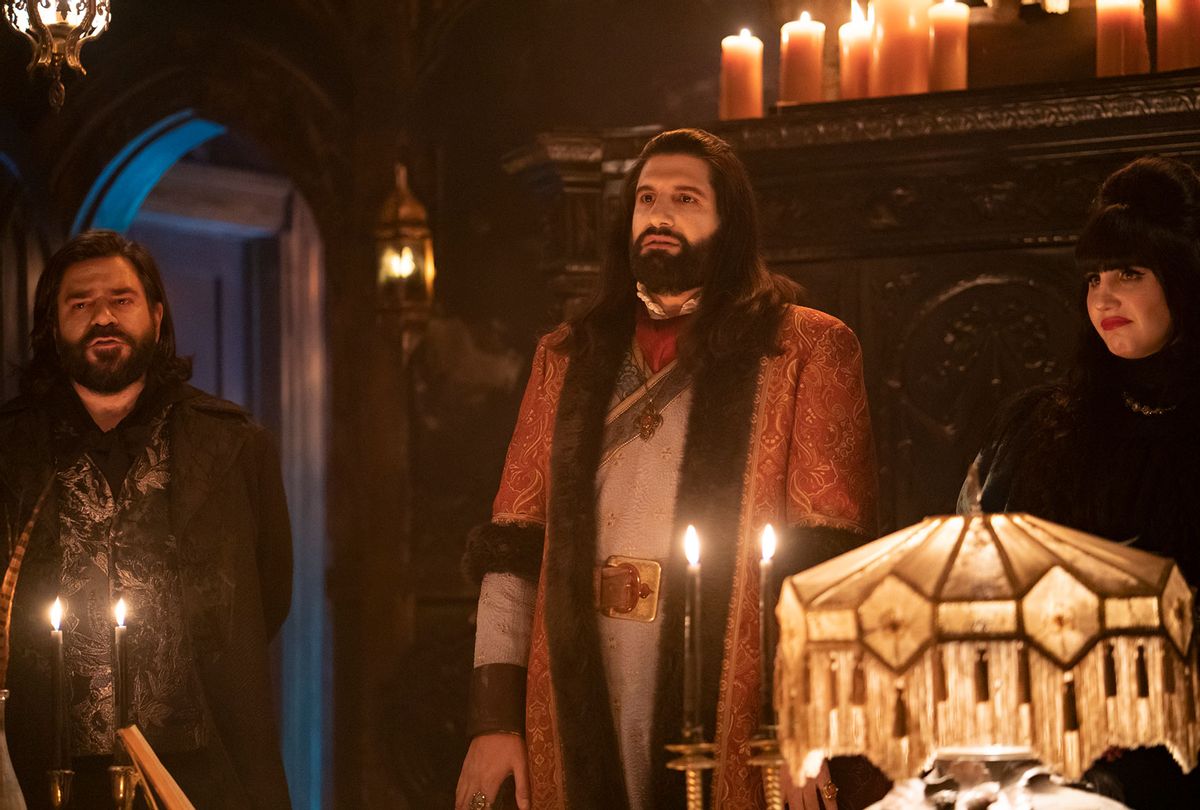 Matt Berry as Laszlo, Kayvan Novak as Nandor, Natasia Demetriou as Nadja in "What We Do In The Shadows" (Russ Martin/FX)
--

Feckless is a word that became popular sometime in 2018, when we were trapped in the dark heart of the previous administration. It's a simple word that could be applicable to anyone in the 45th Oval Office occupant's inner circle because it can mean weak and ineffective, or worthless and irresponsible.

Every member of the "What We Do In the Shadows" vampire brood wears the term accurately too, as they've demonstrated over the course of two seasons of stacking up a body count, human and vampire. Most of those deaths count as dinner, but the vampire mortalities were not entirely their fault. Not that it matters.

Since Nandor the Relentless (Kayvan Novak), Laszlo (Matt Berry), Nadja (Natasia Demetriou) and energy vampire Colin Robinson (Mark Proksch)  have managed to hang on to their wealth and stick around for at least 100 years, it was only a matter of time until they failed upward. As it is in America, so goes the vampire underworld.

The third season would seem to escalate the stakes for the Staten Island vampires by giving them power and responsibility, except for the fact that the world of vampire governance is virtually toothless. Neither are there any laws that can never be broken, despite previous claims to the contrary. In the second season finale Nandor's familiar Guillermo (Harvey Guillén), now a fully realized slayer, slaughters a room full of rival bloodsuckers to protect his allies and roommates.

Under vampire law this should result in termination with the most extreme prejudice. The number one rule is that vampires do not kill vampires, you see. In fact, the crew was on the verge of being beheaded for allegedly violating that most sacred of laws.

Instead, the Supreme Worldwide Vampiric Council promotes all four of them to lead the Vampiric Council of the Eastern Seaboard of the new world. Their reasoning? According to the representative, delivering his message via a wobbly VHS recording, is that yes, killing other vampires is bad. But a foursome that can take out 70% of the most powerful vampires in the tri-state area in one fell swoop? "Well, these are vampires who know how to get things done!"

The gothic, randy humor bouncing through "What We Do In the Shadows" makes it one of TV's most reliable wellsprings of giddiness because its main players are a flawless combination of lazy, self-centered, out-of-touch, entitled and, yes, feckless. Each new season offers a kind of coincidental catharsis.

This latest arc enables us to drink some joy out of watching dumb government in action – an odd proposition, given the massive injustices the Texas legislature has inflicted upon its people within the space of a couple of weeks. Somehow, though, watching our favorite pack of undead knuckleheads suddenly have power and responsibility thrust upon them for entirely illegitimate reasons feels different because the stakes are non-existent.

The Supreme Worldwide Vampire Council itself basically exists to flex its celebrity vampire membership, as it does in the first season, when a tribunal gathers and Tilda Swinton, Danny Trejo, Evan Rachel Wood, Paul Reubens and Jemaine Clement reveal their fangs. They sentence Nandor, Nadja and Laszlo to death on that occasion too, but the roommates escape easily and continue with their afterlives, ignorant of Guillermo's efforts to protect them.

Without him, they'd be lost. Permanently dead, too, but entirely rudderless for however long they're able to survive, since Nandor, Laszlo and Nadja's collective inability to interface with the modern world is a running joke. (Colin, being an energy vampire, thrives in our disaffected age.)

Take all that haplessness, strap it with power and responsibility, and you have the makings of a darkly comic season.

Within the first two episodes the gang is introduced to the secret basement headquarters of all vampires in the local New York area, a place that includes powerful artifacts and historic documents enshrined in a massive magical library.

Nandor immediately uses his new position to purloin a magical cloak to help him hit on the front desk clerk at his gym. Laszlo settles into the library's massive collection of pornography, diving into titles such as "The Knobnomicon," "Egypt's Longest Penises" and "Roy Cohn, Esquire's 169 Sex Positions." ("Bet you didn't know that existed!" he crows.)

They achieve absolutely nothing to benefit anyone besides themselves, aside from Nandor and Nadja's entering into a tenuous power sharing agreement that each of them plans to break to achieve their own glory. "The plan is that I, Nandor the Relentless," he declares, "will sit on my throne and make a number two!"

Through this discombobulated coven the "What We Do in the Shadows" writers build a case that the reasons government isn't working are quite simple. It may be because the people who have the duty of rule thrust upon them often have no clue of what to do with it – or, because the people trusted with the power enforce the law are too timid to do so.

Then again, nobody wants the opposite of that either, as demonstrated in Nadja's excitement to, in her words, "escalate matters to crazy levels."

She makes this announcement when she joins Nandor on a visit to an upstart Brooklyn flock that's refusing to pay its membership dues. It's their first official act of leadership, and the first time their leadership is questioned, since the young vampires refuse to acknowledge their authority or listen to anything they have to say. "You really do not seem qualified to be running s**t!" their smug leader crows, quickly following that by announcing he has a master's degree in urban planning

So instead employing reason, Nadja gets them to comply by using brute force, correcting the kid in a way angry liberals wish their senators would treat the filibuster.

No one can be faulted for wanting to slump into bed for all eternity at the realization of what a mess we're in along with the sobering fact that our avenues to fight back are limited. The people tasked to write laws to counteract these injustices are still committed to being fair and polite, believing or claiming to believe that they can appeal to the opposition's better nature, which simply doesn't exist.

It's natural to seek out the salve "What We Do in the Shadows" offers after a series of punishing reminders of how monstrous and diabolical politicians can be to the people they're supposed to represent. In its realm, fecklessness is bliss. It informs the vampires' bumbling through a political landscape where the only entity taking any real damage is pride.

More than anything, it thrills in serving up wisdom wrapped in jokes from the likes of Nandor, a centuries-old vampire who believes in leading from the darkness with Nadja at his side: "There's nothing wrong with a firm number two."

The first two episodes of "What We Do in the Shadows" Season 3 are streaming on Hulu. New episodes premiere Wednesdays at 10 p.m. on FX and stream the next day on FX on Hulu.