Soufflés aren't scary — at least, not With Sohla by your side 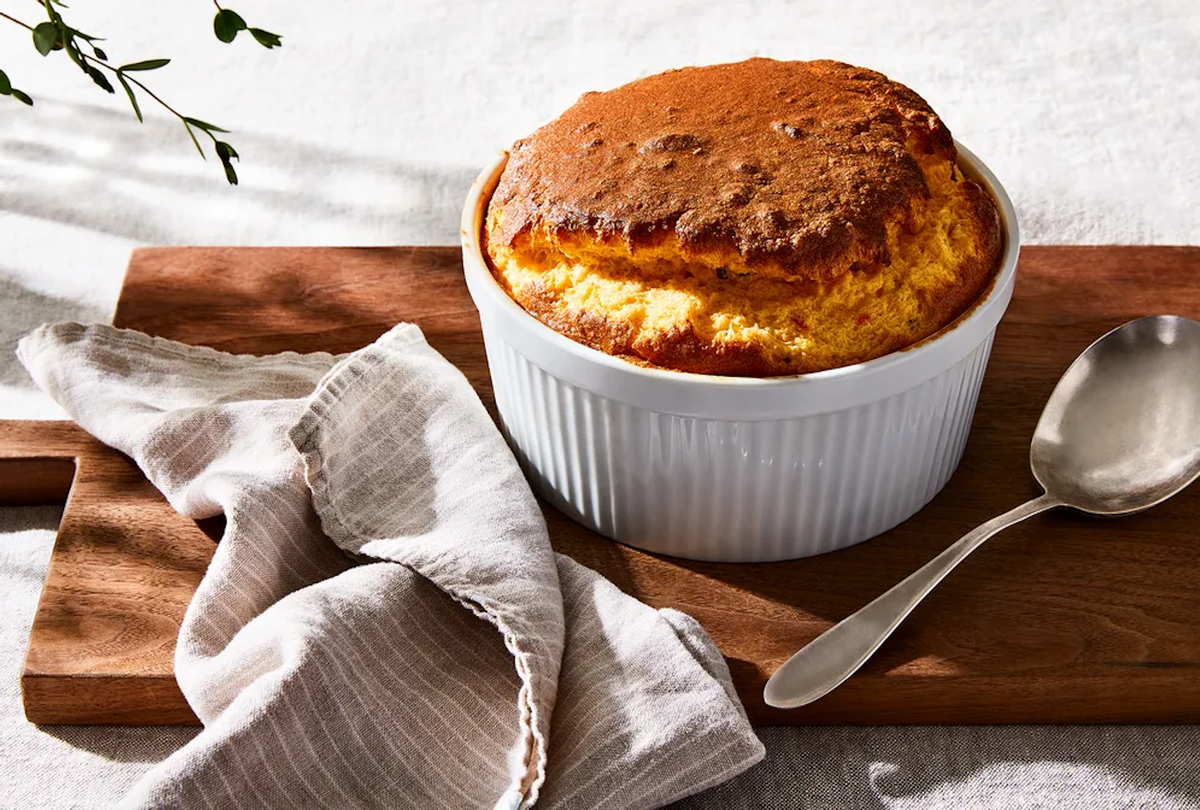 Every month, in Off-Script With Sohla, pro chef and flavor whisperer Sohla El-Waylly will introduce you to a must-know cooking technique — and then teach you how to detour toward new adventures.

Soufflé recipes often seem like they've been written by an overbearing parent. Don't open the oven door! Don't deflate the egg whites! No loud music! And for goodness sake, stop dancing! I have a much more positive relationship with soufflés. And once you learn the fundamental techniques (and how to riff on them), you will too.

What is a soufflé, anyway?

All soufflés start with a thick, flavorful base that's lightened and leavened with whipped egg whites. The result is a fluffy, savory, custardy treat. As with many traditional dishes, the specific origins are up in the air, with a few French chefs claiming ownership. However, the popularizing of the soufflé around the early 1920s can be attributed to none other than the first celebrity chef, Marie-Antoine Carême. He produced hundreds of extravagant soufflé recipes and developed the single-serving version we've come to know so well.

There is a wide range of vessels that you can use to bake a soufflé, and none of them need to be a "soufflé dish." No, it won't rise as perfectly as a fancy restaurant version, but you're not cooking in a fancy restaurant, are you? First, decide whether you want individual portions or one honkin' soufflé. Either way, you are looking for a tall, oven-safe container with straight sides. That's it. I'll use anything from a coffee mug to a saucepan.

Regardless of the vessel you choose, it is important to generously butter the sides and bottom. That butter is acts like glue, holding tight to whatever you sprinkle on. Traditional options are grated cheese or bread crumbs, but you can branch out and try crumbled bacon, smashed crackers, or ground toasted nuts. This will add flavor and texture. More importantly, it gives the batter something to hold onto as it rises, like a climber scaling a mountain.

The base for a cheese soufflé is traditionally béchamel, which is milk thickened with flour and butter. You've probably made this before! It's the same creamy stuff you use to make mac and cheese, queso, lasagna, and more.

Start by melting butter until foamy (this means the butter is ready to break up any flour lumps), then add flour and cook until blonde in color and smelling toasty. Don't cook the flour so much that it gets brown, which reduces its thickening power. Add your milk a splash at a time and simmer until thick, creamy, and you can no longer taste the raw flour.

To change things up, instead of milk, I'll use chicken or beef bone broth for a gravy base (check it out in my French Onion Soup-fflé). Anything goes as long as your base has enough body, because this is how a soufflé gets its creamy core.

Go heavy on the salt and light on the mix-ins.

Now that your base is made, it is time to add the cheese (like Gruyère, aged cheddar, or manchego), seasonings (like black pepper, paprika, or garlic powder), and mix-ins (like minced herbs, shaved chiles, or sliced scallions). When seasoning, channel the cheerleaders from Bring It On and remember to "Be aggressive, be, be aggressive!" The whipped egg whites will significantly dilute the flavor of the base, so too-salty is actually a good thing here. Keep your mix-ins small and sparse, otherwise your soufflé might rise wonky, weird, or not at all. Just like when you're choosing your carry-on luggage, think compact and light. The star is the soufflé batter, not the bacon chunks. Save that for a BLT.

Whip the egg whites by hand.

This is the most temperamental step in the entire process — but once you get it down, your soufflés will be unstoppable. Because we are whipping egg whites without any sugar, they go from perfect to broken within seconds, so I always whip by hand. Aim for soft peaks: egg whites that look foamy, airy, and opaque, and gently curl back onto themselves when you lift the whisk. Stiff peaks max out the egg whites' air-trapping capabilities; when the soufflé goes into the oven, the heat causes that trapped air to expand, and rather than rising, all those bubbles will burst. By whipping to a soft peak, we'll give that hot air room to grow, expand, and ultimately, rise.

What the heck does "fold" mean?

Folding is a valuable technique for many batters, most often when you want to incorporate something light into something dense. To prevent bursting too many bubbles, always fold in three steps:

When baked, the top of the soufflé should be browned and the mixture stable with a bit of a wiggle. For a picture-perfect straight and tall soufflé, many recipes instruct you to attach a paper collar. I usually skip this step because, frankly, I don't care. But you do you!

Now that you're fully versed in soufflé assembly, you are set free! First, try my French Onion Soup-fflé or Pimento Cheese Soufflé (or, better yet, both). Then play around: Make a béchamel base with low-moisture mozzarella, provolone, oregano, and cooked-down passata for a piz-fflé! (Or is it a souzza?) Or a blend of cheddar, Monterey jack, and chili powder served alongside tortilla chips as an excellent alternative to queso. Or turn your cheese plate into a soufflé with a Gruyère base and teeny diced roasted pears served alongside crackers with candied nuts and your favorite jam. You're only limited by your imagination (and the heft of your mix-ins). So soufflé away!