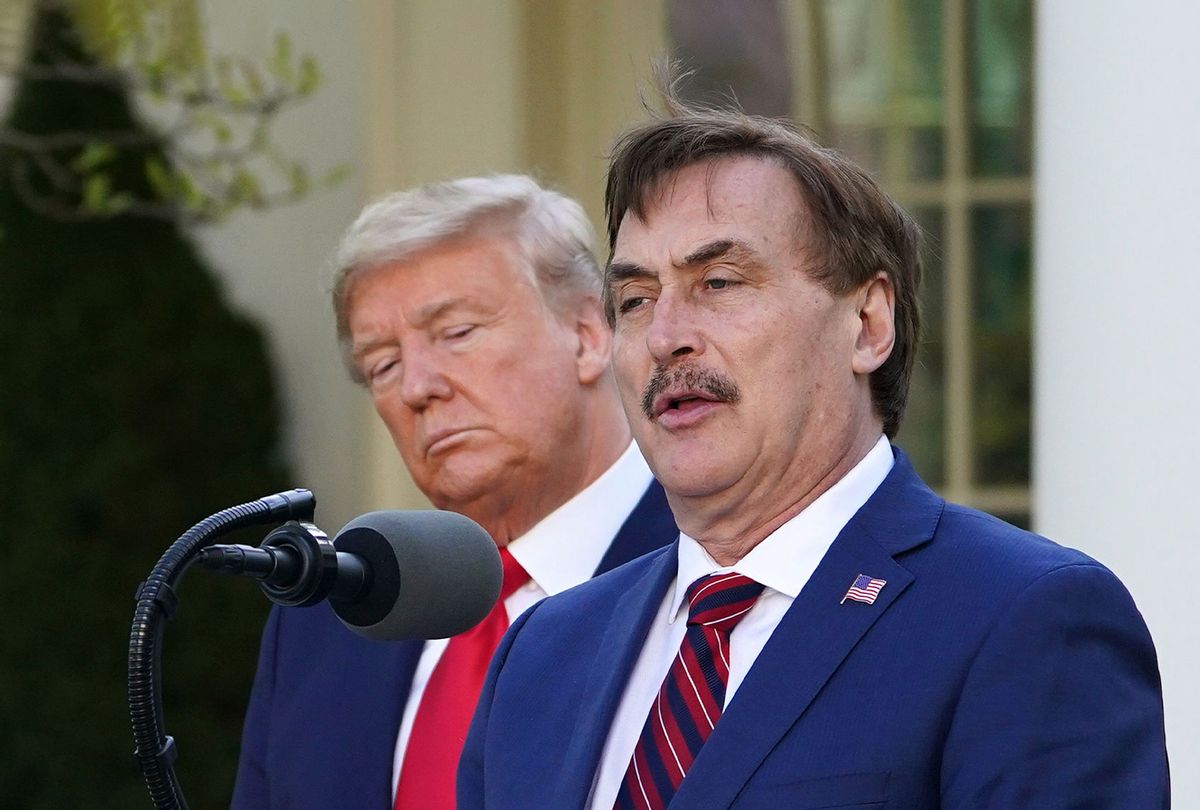 US President Donald Trump listens as Michael J. Lindell, CEO of MyPillow Inc., speaks during the daily briefing on the novel coronavirus, COVID-19, in the Rose Garden of the White House in Washington, DC, on March 30, 2020. (MANDEL NGAN/AFP via Getty Images)
--

Last Thursday night, MyPillow CEO Mike Lindell made a surprising admission to his loyal followers, considering that he faces a defamation lawsuit by Dominion Voting Systems for $1.3 billion. Lindell said his company has profited from his repeated lies about the voting technology firm — enough that the pillow king has recently hired an additional 200 employees.

In fact, Dominion argued exactly this in the company's initial Feb. 22 complaint against MyPillow and Lindell, alleging that the pillow tycoon had pushed unsubstantiated lies about the 2020 election and Dominion's voting machines in order to generate more revenue for his pillow empire.

Describing Lindell as "a talented salesman and former professional card counter," Dominion's complaint alleged that he "sells the lie to this day because the lie sells pillows. MyPillow's defamatory marketing campaign — with promo codes like 'FightforTrump,' '45,' 'Proof,' and 'QAnon' — has increased MyPillow sales by 30-40% and continues duping people into redirecting their election-lie outrage into pillow purchases."

Responding to those accusations in an April 19 memorandum accompanying a motion to dismiss the suit, Lindell's legal team argued the opposite, contending that Dominion was wrong to claim Lindell's company is thriving.

While it's true that several big-box and online retailers dropped Lindell's signature pillow from their stores, Lindell now claims his business has generated enough increased revenue to hire more employees.

A Dominion spokesperson declined to comment on the matter when reached by Salon.

Experienced trial attorney Max Kennerly told Salon that Lindell's admission that he has profited off the lies he's been spreading might not be the soundest legal approach.

"It's quite rare for civil defendants in any case to admit a connection between the alleged wrongdoing and their income," Kennerly said. "It's particularly unusual for defamation defendants to draw a connection between their allegedly defamatory statements and their own wallet — typically, the plaintiff has to fight just to show that could have been part of the motivation.

"By and large, defamation cases are an uphill battle, but it seems like Lindell is committed to making it a downhill slope for Dominion," Kennerly concluded.

After being dropped by retailers, MyPillow largely turned to TrumpWorld influencers and far-right figures, including Dan Bongino, Steve Bannon and Alex Jones, among others, to hawk products from dog beds to Giza dream sheets, relying on a mysterious profit-sharing agreement between the parties.

Former journalist and recent Duke Law School graduate Robert DeNault, in a conversation, with Salon, further discussed the contradictory statements made by Lindell and his team:

Any time a client publicly contradicts an assertion an attorney made in their defense, it's not a great situation. Here it seems really problematic, because Lindell's attorneys directly asserted he had taken a loss on his business in response to Dominion's claim Lindell was defaming them to profit with MyPillow sales. But now Lindell appears to be out here suggesting his company is actually profiting and even growing based on media exposure he's gotten from the situation. The big issue is that if you're his lawyer, you might need to argue that he was embellishing or perhaps even lying when he said that MyPillow actually got busier and hired more people, in order to avoid accusations by Dominion that you've misrepresented facts to the court. But even that argument has pitfalls, because it involves admitting to conduct that strongly resembles the allegations Dominion is making against him, which is essentially that Lindell lies freely on TV and elsewhere. It's not an enviable situation to be in.

As Salon reported last week, Lindell not only recently sold one of his private planes but has also paid out millions to his self-appointed cyber experts.

The pillow maven didn't return a Salon request for comment on this story.

You can watch Lindell's online comments below, via YouTube: