The GOP's slow-motion coup is speeding up, while Democrats choose to snooze. History will remember them harshly 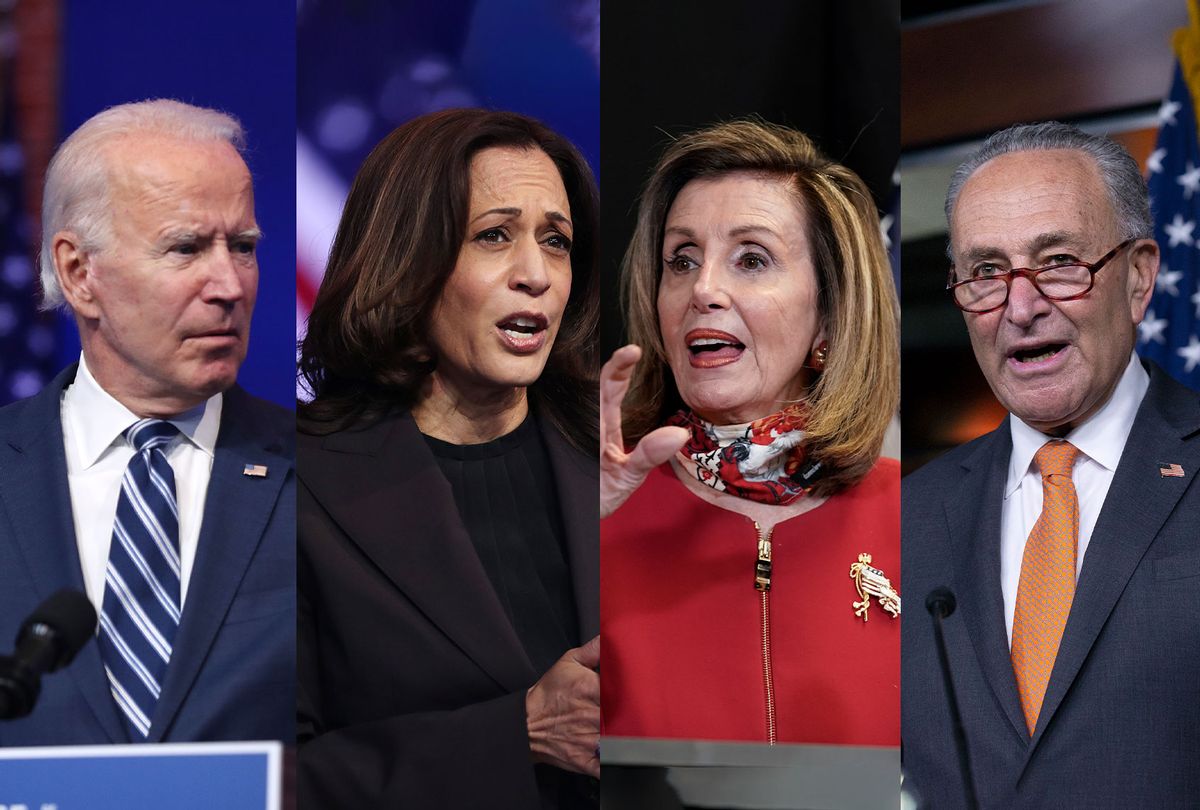 One by one, they promised to fight. As the U.S. Supreme Court effectively overturned five decades of constitutional protection of reproductive rights, Democratic leaders crafted their toughest tweets and vowed the rule of law would be upheld. Action would commence in Congress. Legislation would be drafted; bills would be passed. "This fight is only just beginning," said Senate Majority Leader Chuck Schumer.

If only it were so. If these statements felt familiar, Democrats made similar guarantees to battle Amy Coney Barrett's norm-obliterating, election-eve nomination to the Supreme Court to fill Ruth Bader Ginsburg's seat. Democrats banked a fundraising haul off all the fighting they would do, before Barrett's confirmation hearings ended with Democratic Sen. Dianne Feinstein embracing Republican Sen. Lindsey Graham and thanking him for some of the best hearings she'd ever participated in. Democrats then barely mentioned Barrett over the last three weeks of the campaign.

So while Schumer's fight to save Roe v. Wade now belatedly begins, the state legislatures that were gerrymandered into oblivion by Republicans in 2011, again while Democrats snoozed, saw and understood the green light from the Supreme Court. They promised draconian new abortion restrictions of their own, also cleverly engineered like the Texas law to evade judicial review. Congressional action to codify Roe? That's a meaningless promise, absent the muscle to overcome a guaranteed Republican filibuster in the Senate. Then it would head back to a Supreme Court packed with five conservatives appointed by Republican presidents who lost the popular vote, and confirmed by a U.S. Senate that dramatically over-represents Republican voters. The very court that last week proved itself willing to eviscerate what even Brett Kavanaugh, during his confirmation hearings, had called "precedent on precedent."

One might presume from all this that the Democrats are a weak minority party with few cards to play. They're actually a weak majority party that refuses to play its hand. Democrats control the presidency and both houses of Congress. Thanks to Republican gerrymandering, this is highly unlikely to be true by January 2023. Common sense suggests that  might increase Democrats' urgency to act. But while every week brings frightful new reminders that a decades-long Republican strategy of constitutional hardball has driven us to the edge of enduring an extended period of GOP minority rule, Democrats remain terminally unwilling to muster the power necessary to counter it. Republicans are committed to seizing power by any and all means. Democrats are committed to … maintaining the filibuster? During the first month of the Biden administration and this new Congress, Democrats could and should have acted. We are in month nine. We are in quicksand.

If the late-night smothering of Roe and impending GOP minority rule after next November won't do it, it's hard to imagine what events would actually push Democrats to action. They could end the filibuster, which requires 60 votes to move legislation to the floor and allows a minority to paralyze the popular will. They have not. They could create a voting rights exception to this arcane Senate rule (which was itself developed to preserve white rule and stall civil rights legislation), and end the assault on free and fair elections driven by GOP state legislatures and the Roberts court, by passing the For the People Act and the John Lewis Voting Rights Advancement Act. They refuse.

Democrats could grant statehood and Senate representation to Puerto Rico (with a population larger than 21 states) and Washington, D.C., a city with more people than Wyoming. The filibuster ended those half-hearted efforts as well. Or they could follow the lead of Republicans in Arizona, Georgia and Iowa — all of whom have packed their state supreme courts or reworked appointment rules to their favor — and either add seats to the U.S. Supreme Court or eliminate lifetime tenure, in return for the outright theft of Merrick Garland's seat and the predictable refusal to play by the same rules with Barrett's hurried confirmation. There's no constitutional reason or historical precedent for the court to remain at nine justices. Naively, Democrats say no.

Their impotence is a policy choice. Representative democracy is unraveling before us. Democrats are standing there watching. This slow-motion collapse has been a long time coming, with the perilous endgame visible to all. Republicans have enacted the most ruthless gerrymanders in history, brazenly packed the courts — while dragging Democrats who dare suggest the same — and ruthlessly exploited any structural or procedural advantage available within the Electoral College, the U.S. Senate and the Supreme Court. They've boasted of their success, and their disregard for majority rule, let alone multiracial democracy, has become conventional wisdom.

This makes the Democrats' complacency all the more confounding. Republicans behave like a party that can run roughshod over constitutional norms without facing accountability because Democrats have made it so, time and again. Now time is running out.

Perpetual minority rule through the courts, which will uphold gerrymandering, voter suppression and now the subjugation of women, was precisely why Sen. Mitch McConnell and his allies were willing to burn D.C. to the ground over the past 12 years to capture the Supreme Court. The high court coup — and the ensuing decisions in Shelby County v. Holder, Common Cause v. Rucho and most recently Brnovich v DNC — have gutted crucial voting protections and allowed Republicans in state after state to build unbreakable circles of unaccountable power, entrenched against any conceivable electoral backlash. The Texas abortion law, which pays citizens to rat each other out like some desperate Stasi initiative, would be inconceivable in a state where the ruling elite actually feared getting tossed out by the electorate. Instead, Republicans secure in their gerrymandered redoubts know that the voters literally cannot dislodge them.

How many times do Democrats need to see the GOP playbook run under their noses before they understand that this is the plan for the entire United States? You can't out-organize or out-vote or outflank this kind of burgeoning authoritarianism because it is carefully and cleverly constructed to withstand your outrage, your street pressure, your court challenges and even, ultimately, your votes. It enlists the archaic procedures of our crumbling political order to reassert the waning power of white men, now a distinct minority, over the aspirations, rights and hopes of the country's emerging multi-ethnic majority. It cannot be reasoned with or bargained with or mitigated by bipartisan gangs of six or eight or 12 Senate wise men.

Even now, as leading Democrats huff and fume, Trump's radicalized foot soldiers are taking over local election administration in key states with razor-thin majorities in the 2020 presidential election. State legislatures in Georgia, Texas and Arizona are laying the groundwork to suppress Democratic turnout and in some cases even take over urban election machinery in an open plot to overturn the results of the 2024 election. They are showing us all exactly what they will do and how they will do it. Now the Texas GOP and the Supreme Court have helpfully given us a vision of what the aftermath of democracy's destruction will look like.

So what will Democrats do about it? Sen. Dick Durbin, D-Ill., promises the fearsome vengeance of Senate Judiciary Committee hearings. On Twitter (of course), Minnesota Sen. Tina Smith pleaded for voters to simply elect more Democratic senators in 2022, and then, she promises, they'll finally get to all this. But by 2022, the U.S. House will be gone. And many competitive states, like Georgia, will hold U.S. Senate races under rigged rules that this Congress could do something about now. In fact, 2022 is not an option. It is simply too late. A Democratic president and the current Democratic majority in the Senate must use all their persuasive power to force sitting senators to act. That's the only option. Not electing more Democrats somehow, someday. Not owning the cons on C-SPAN. Use the power that you have, and use it now.

The Supreme Court's decision to eviscerate Roe v. Wade with no hearings and barely a paragraph of explanation should be seen as a fork in the road. Down one path, party elites finally convince holdouts in the U.S. House and Senate that democracy needs reinforcing, and that it must be done with a simple majority vote, while Democrats still cling to the House and a narrow 50-50 Senate majority that could vanish into the Potomac if several senators over the age of 80 fail to outrace actuarial tables (or if someone slips and falls during one of Joe Manchin's houseboat parties). There is time, just barely, to pass democracy reforms, enlarge the Supreme Court and gird themselves for elections in 2022 and 2024 that promise to be grueling, even given an even playing field.

Down the other path lies the dystopia whose outlines we see clearly in Texas. If Democrats choose to do nothing, the small number of representatives and senators holding up desperately needed action will be regarded, justifiably, as enablers responsible for a descent into authoritarianism. The names of Joe Manchin and Kyrsten Sinema will take their places in history alongside Neville Chamberlain as synonyms for feckless appeasement. And this Democratic Party will be remembered for serving as the handmaiden for a tyranny that could last generations.

David Faris is an associate professor of political science at Roosevelt University and the author of “It’s Time to Fight Dirty: How Democrats Can Build a Lasting Majority in American Politics.”